For December’s Eat the World party, Greg chose Venezuelan (with Central/Latin American influences et. al.) to show off his ancestral culinary skills. He made arepas- a heavy disk of cornmeal that is dense on the inside and crisp on the outside.

When they were finished, he showed us how to slice them 3/4 through and scrape out some of the fluff in order to properly fill them with queso fresco, guasacaca, and his delicioso avocado chicken salad. Bonus points because avocado is the best.

Jessica made shrimp and squid paella with savoury yellow rice. First, I was not so sure about this. I have not eaten paella before because I’m typically turned off by anything with eyeballs and gills in tact, but she graciously extracted the weird parts and arranged it so beautifully in her new cooking dish.

The shrimp/prawn broth she made it in was so rich, not fishy, and the squid was cooked perfectly. There is also something oddly satisfying about eating a meal with a delicate little tentacle dangling from your fork. Definitely won me over.

I made Cuban-style black beans and spicy chipotle-lime carnitas with cilantro in the slow cooker. We put this in the arepas as well.

Then I had this idea to make a rum-soaked banana upside-down cake. But I couldn’t stop there. I also made a rum-soaked crushed pineapple cake, covered it with a layer of dulce de leche, and put the banana cake on top.

Although both cakes were thoroughly baked, the rum and dulce de leche melted into the layers and gave it a bread pudding texture.

We mixed up some Caipirinhas and dug in. 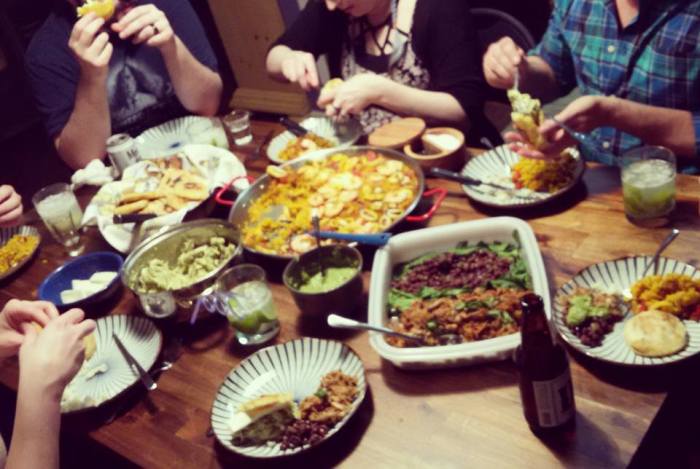