Wealthy British doctor-turned-politician Mitchel Henry built the Kylemore Castle in the heart of Connemara in the late 1800s, and for that time it was mindbogglingly futuristic.

Around half of the Abbey (castle), since the rest is under construction.

Henry had married the love of his life, Margaret, and they had several children. Shortly after the castle was finished, the family went on a vacation to Egypt where Margaret caught dysentery and passed away suddenly. Henry built a mausoleum for her and the two remain buried together there today. 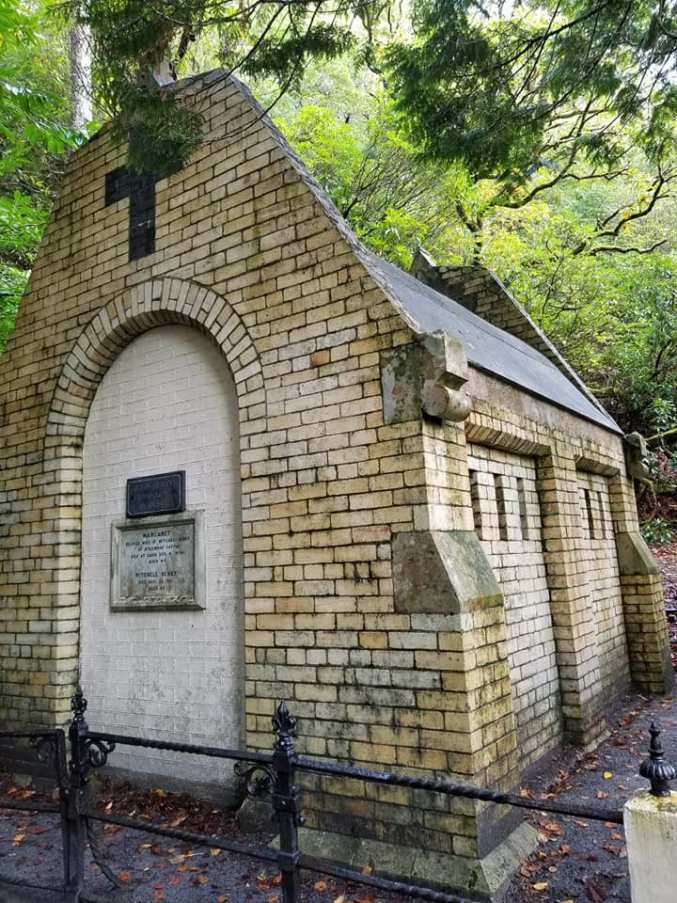 The Abbey contains some 60 rooms, over half of which are bedrooms, as well as a library, smoking room, drawing room, and others but serves as a museum. We admired the lovely marbled mantles and crown molding in the first few rooms, but it became too hot and stuffy inside so we moved on.

In 1920, a group of Belgian nuns purchased the property long after Henry had gone back to England. The nuns had fled Belgium after their abbey was bombed in World War I, and this new land suited them perfectly.

Since 2010, the school has been closed but the nuns have new programs in the works. 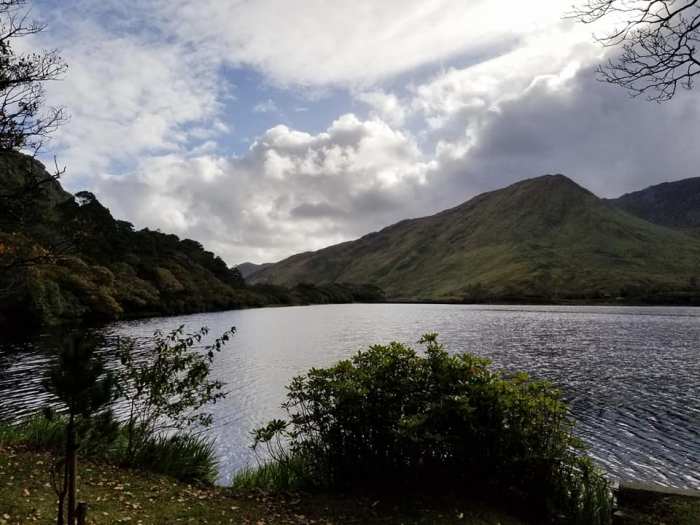 A 5-10 minute walk to the church will take you alongside the Kylemore lake with views of the Connemara Mountains, accompanied by waterfalls, wood-carved seating, and manicured shrubbery.

The two of us strolling through old buildings and around the grounds in our wintry witch attire reminded me of “Lemonade” by CocoRosie: 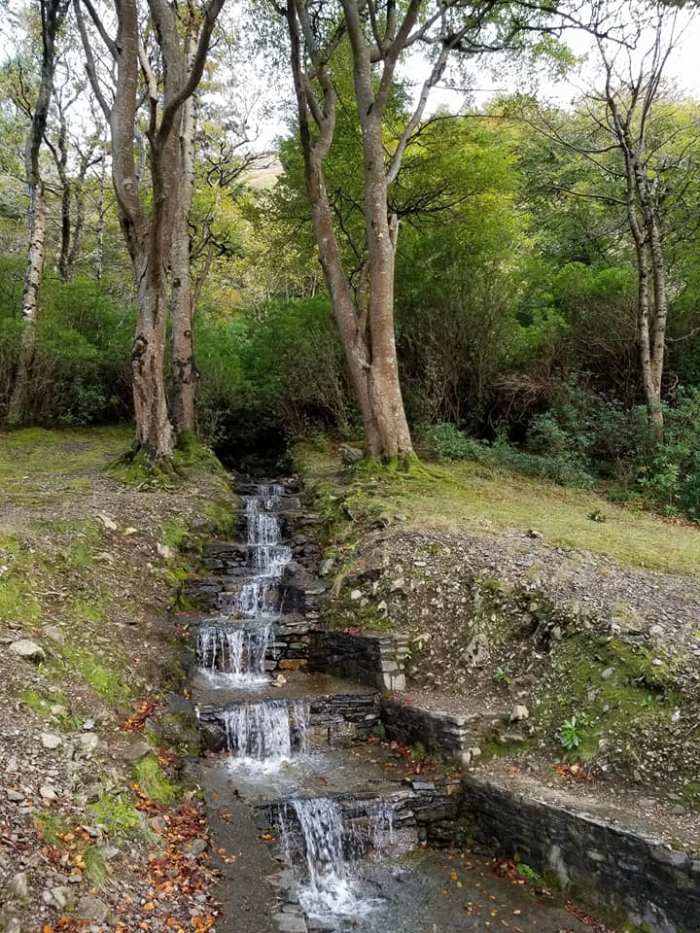 A few years after Margaret passed, Henry built a neo-gothic church in her honour.  It appears as though his intention was for the two of them to be buried below it but their bodies never left the mausoleum. 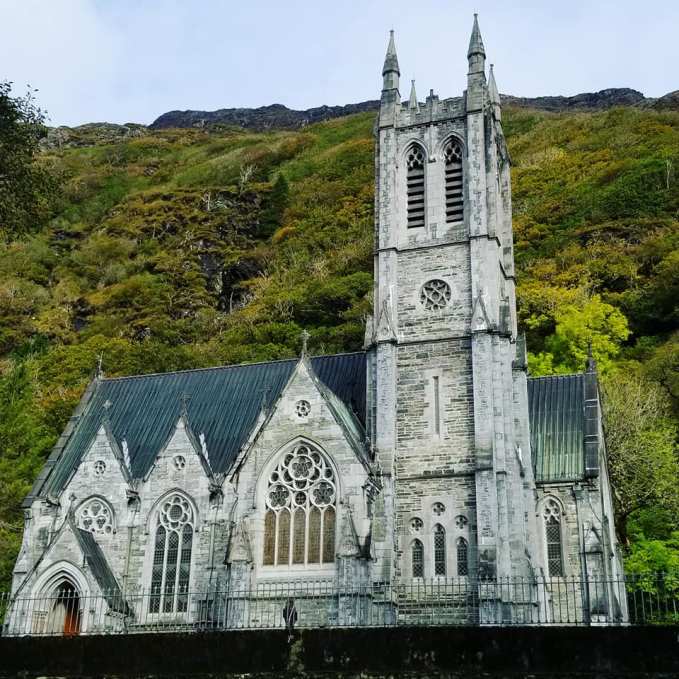 Frontal view of the church with a small graveyard. 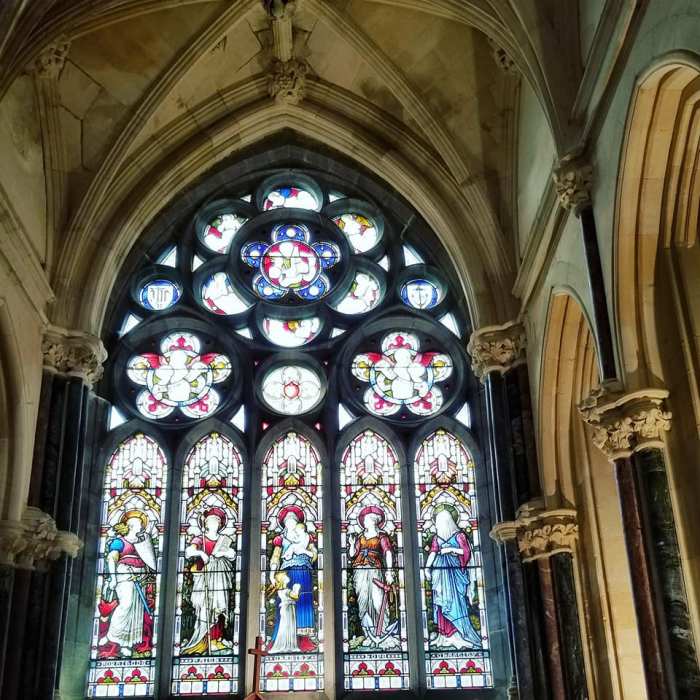 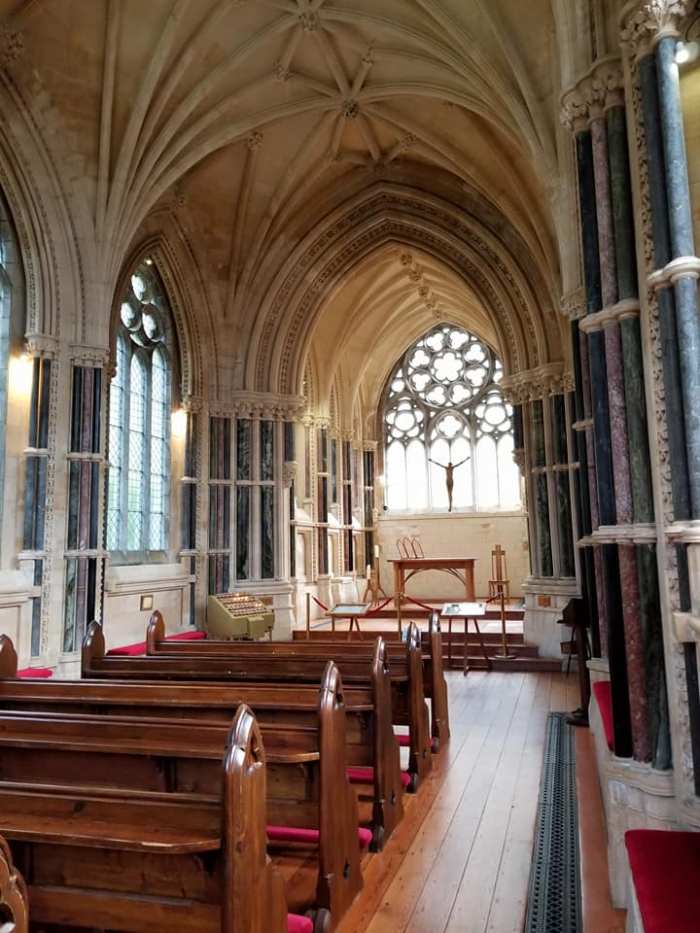 Returning to the Abbey, we took the lower path along the water instead of the main one directly in front of it.

Henry was not merely a rich doctor who turned to politics to advance himself. Despite being British born, he claimed solely Irish blood and devoted his career to improving the lives of the Irish poor.

He purchased this land when it was miles and miles of bog wasteland and invested in developing the property and sponsoring developments by others living in Connemara. He also provided jobs, lodging, education, and food from the gardens for his neighbours who were hardly recovering from famines. 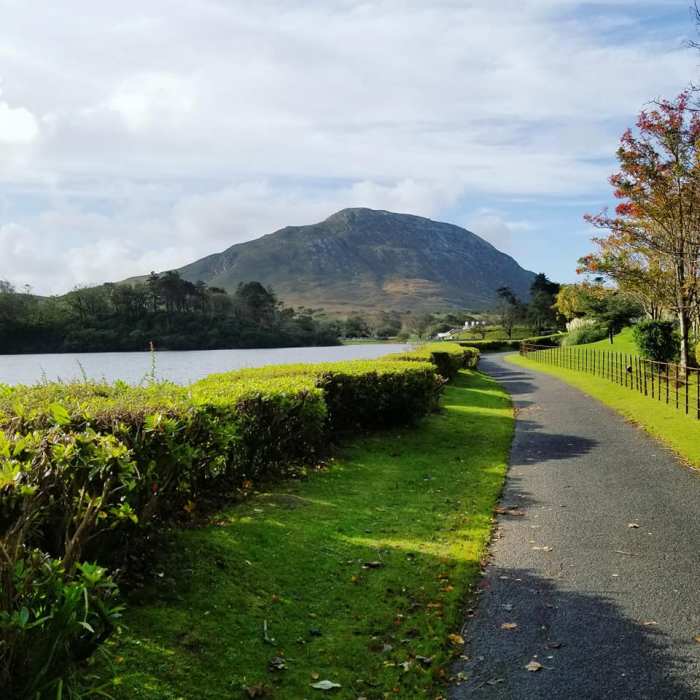 A few yards away, just by the entry gate, there is a trolley station that comes around every ten minutes and will take you directly to the gardens.

Victorian Walled Gardens
The gardens that sustained the community in the 1800s are just as vibrant and lively today. Spanning around six acres, the garden is divided by a creek just west of center, with a lime kiln, glasshouses, propagation houses, tool sheds, and other features. 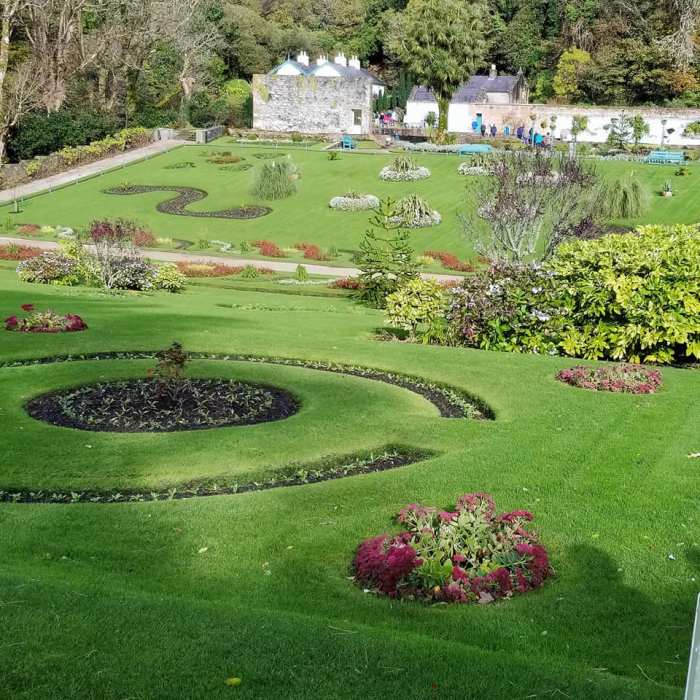 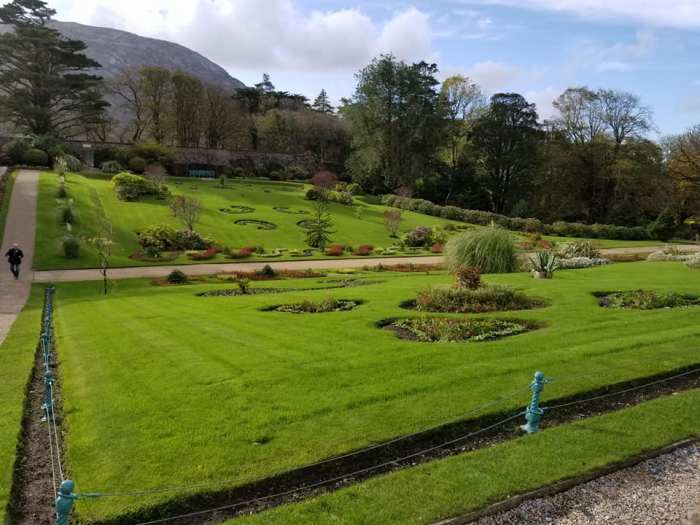 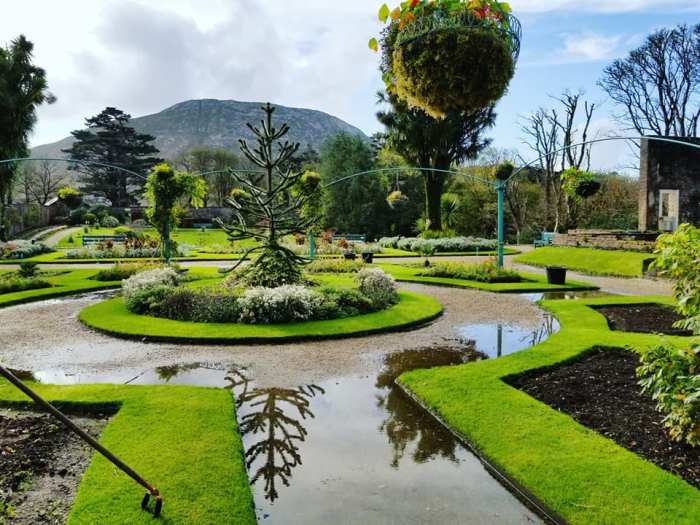 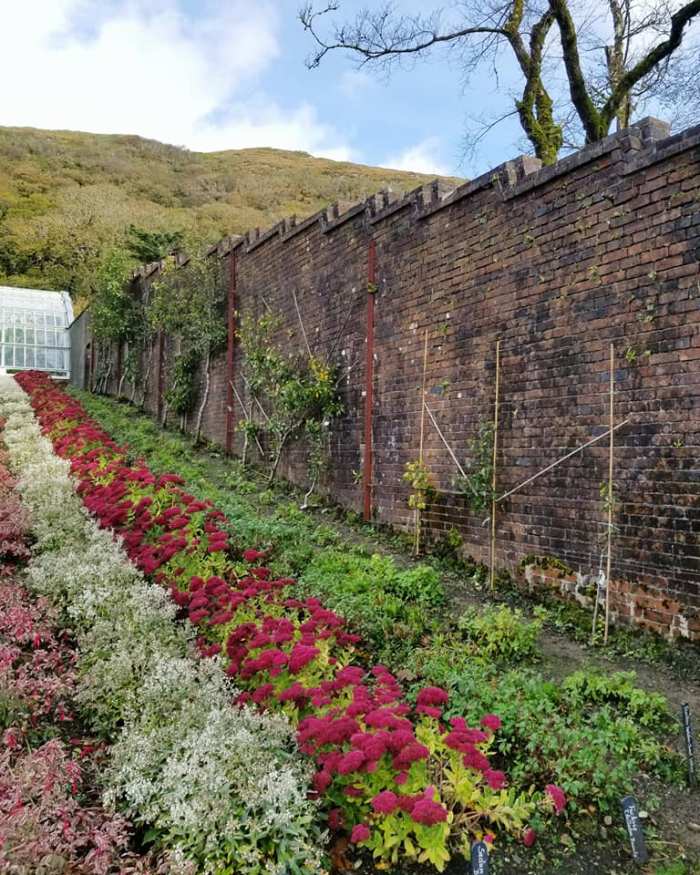 One of what was over twenty heated glasshouses 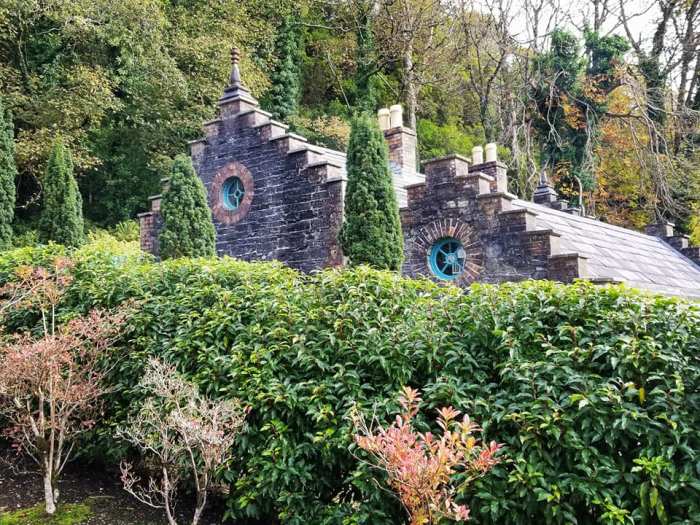 Bothy, or cottage, where gardeners lived 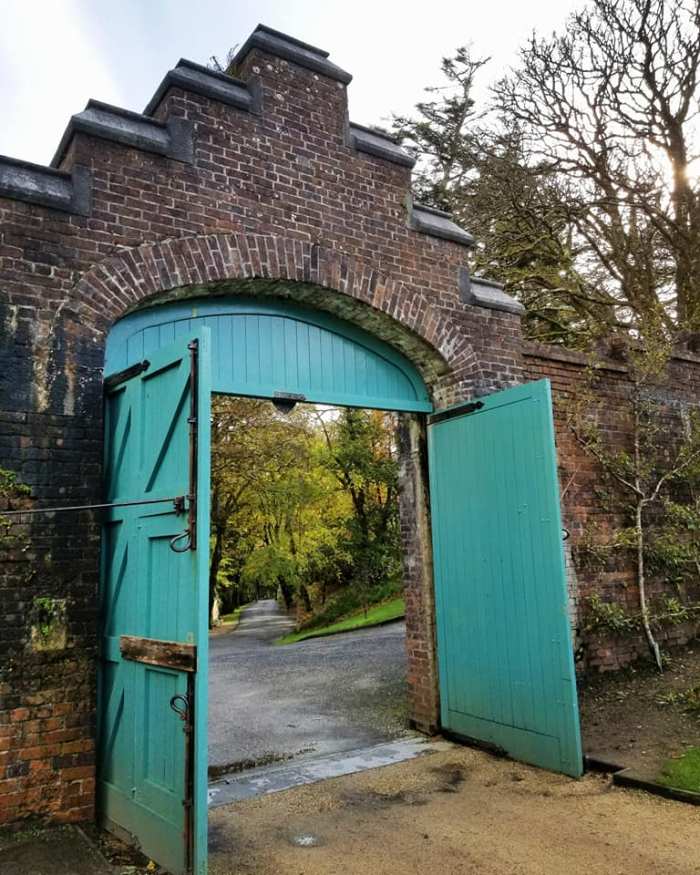 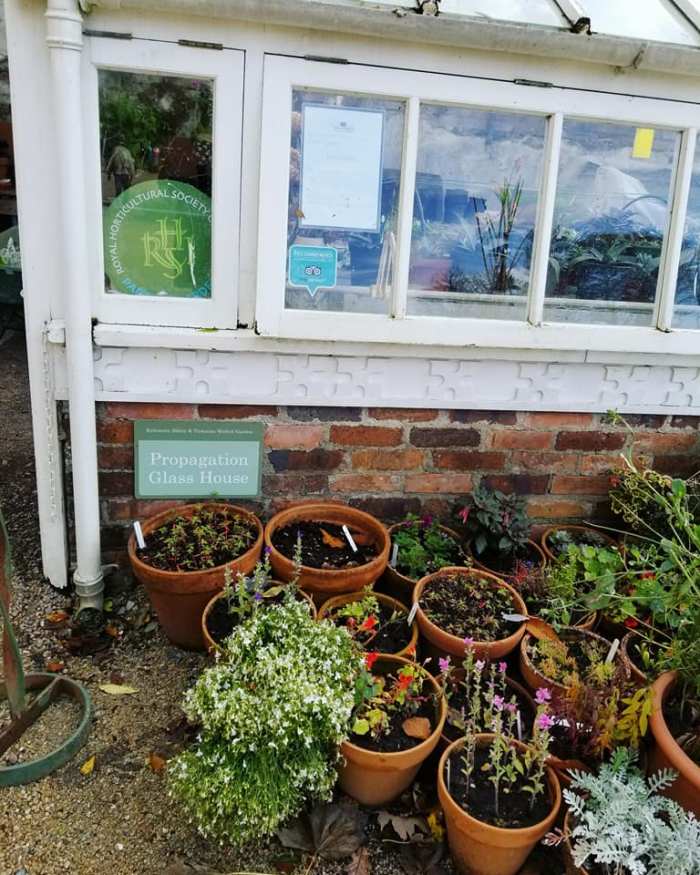 After leaving the four main walls and taking a long shaded walk through the forest, you come back around to the garden entrance. 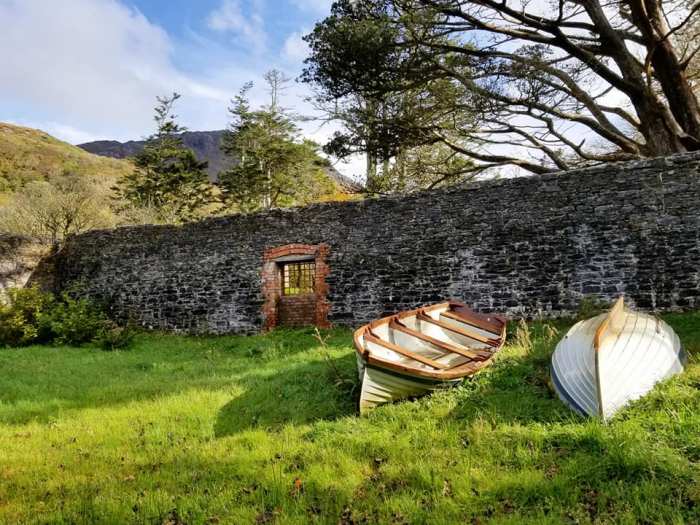 We ordered quiche, rocket salad, cinnamon beets, and lattes for lunch at the cafe on the hill just outside the garden. The trolley stops for about an hour mid-day so it was excellent timing.

Once the trolley took us back to the main entrance, we spent about an hour in the massive artisan gift shop, with a large amount of goods created by the nuns and local artists. 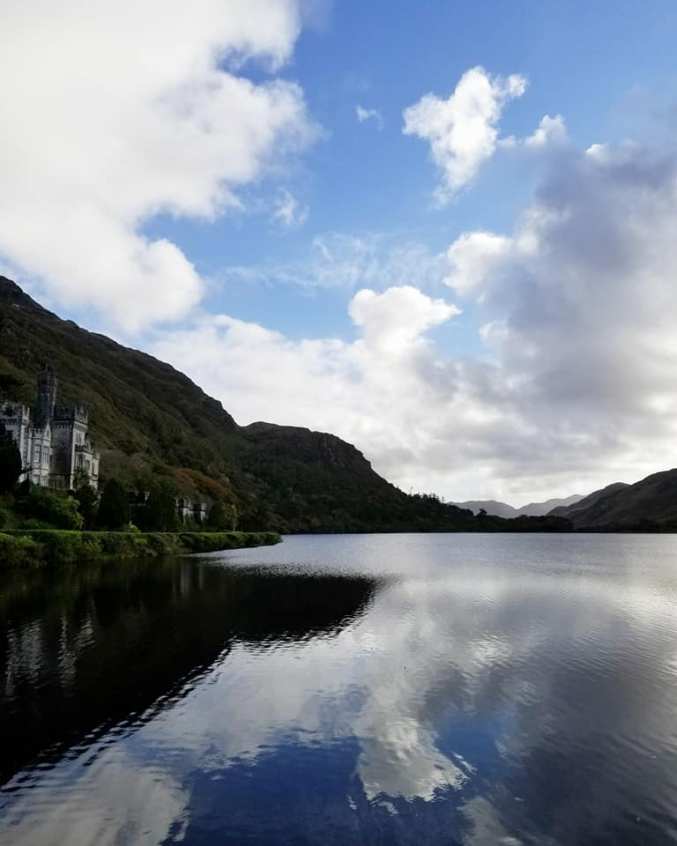 We joked that we had been sedated with something in the rocket salad after feeling drowsy, happy, and relaxed, but I maybe it was just  the contagious spirit of Kylemore.

Kylemore Abbey has a wonderfully informative website with many photos, videos, and history sections you can check out here.