Tell me if you’ve heard this before:

“Please allow me to introduce myself, I’m a man of wealth and taste.
I’ve been around for a long, long year, stole many a man’s soul and faith.
And I was round when Jesus Christ had his moment of doubt and pain,
Made damn sure that Pilate washed his hands and sealed his fate.
Pleased to meet you, hope you guess my name.
But what’s puzzling you is the nature of my game.“

Mick Jagger wrote this song “Sympathy for the Devil” after reading my favourite book, Master & Margarita by Mikhail Bulgakov.

My song pick for this entry is Laibach’s version which was released in 1990:

The Book
Master & Margarita has three main story lines. The primary story unfolds in 1930s Moscow where two men debate the existence of God, faith, and the afterlife on a park bench. Soon they are interrupted by the appearance of a mystical stranger who engages them.

We learn that this stranger Voland is actually the Devil himself, who has set upon the city with his seductively rowdy and menacing entourage of beasts, demons, kooks, and witches to wreak havoc. This photo shared from Deviantart.com

Voland’s henchmen consist of his right hand man and ambassador Koroviev, the meistro of illusions and impeccable translation as he follows Voland from place to place on each new endeavour; Begemot, a vulgar vodka and cognac-swilling, gun-slinging, sassy black cat “the size of a pig” who can not avoid trouble; Azazello, a murderous demon with empty black eyes, a fang, and a menacing disfigured white face; and Hella, a dangerously beautiful succubus with flame red hair.

Voland’s antics terrorize corrupt authorities and the governing rich who walk on the backs of the miserable poor in a series of hilarious pranks and cruel stunts that expose them for who they are. 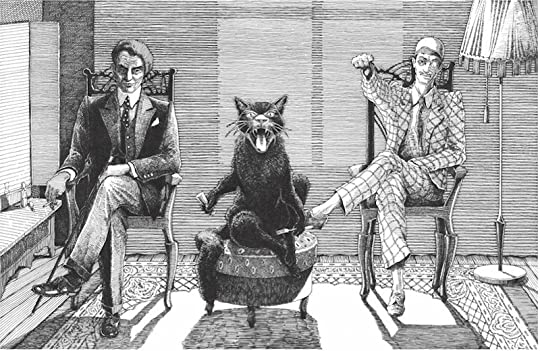 This photo shared from Goodreads.com

In the secondary story line, “Master” is locked in an asylum after the exasperating publication of his life’s work- the story of Christ from the perspective of a remorseful and extorted Pontius Pilate who eternally seeks forgiveness- is blacklisted and Master becomes ostracized. The tertiary story follows the persecution of Christ in Master’s imagination.

Master is supported only by his devout lover Margarita from afar, who was unwillingly wed to an upper class Soviet crony. The two despair and barely subsist on shared hopelessness that there is no place in their world for true love to flourish in the light.

The Man
Mikhail Afanasyevich Bulgakov was born in Kiev in 1891. He was a writer, playwright, and most impressively a doctor and surgeon during several wars.

He had a complicated relationship with dictator Stalin; at first Stalin banned his work and he was blacklisted for supporting anti-Communist agendas, but Stalin later defended him and helped him find work during hard times. Stalin granted him a position at the Moscow Art Theatre and was a frequent patron of his plays.

Though many of Bulgakov’s works continued to be banned, he called upon Stalin personally to help him leave what is now Ukraine and rejoin as a citizen of the USSR when his fate as an outcast became too grim.

Parallels are easily drawn between Master’s damnation and Bulgakov’s years of work on publishing Master & Margarita, only to have it banned by the state and to be locked up in many ways. It was published posthumously in 1967, more than 25 years after his death, and was almost immediately revered as a 20th century masterpiece.

The Ball
One of my favourite scenes in the book is when Voland charms Margarita into his hypnotic underworld. He opens her eyes to magic, earthly delights, self-possession, and directs her to liberation.

The NSFW video below is from the television adaption depicting the scene where Margarita discovers Voland’s magical cream and gains the power to fly, landing in an ethereal ritual where she is greeted by faeries, witches and a Pan-like creature.

Voland eventually crowns Margarita the Queen of his Walpurgisnacht Ball, the occasion that has brought him to Moscow.

The Walpurgisnacht Ball is strikingly similar to the rites of Masons and Knights Templar, and its guest list includes conjured spirits who were previously condemned to hell for a night of celebration and reckoning. Bulgakov also drew inspiration for this scene from some of the wild parties he attended at the Spaso House.

Discourse between attendees revolves around their sins and convictions, and the lines of morality become blurred as the reader may empathize more with the condemned.

In this NSFW scene from the television adaption, Margarita enters the ball feeling anxious about what is starting to happen:

And also a poor quality video of the opening scene of the ball itself:

The Devil (as Voland) is portrayed in this book as Master of Ceremonies; the embodiment of chaotic neutral; one who gives light and knowledge without any allegiance to “good” or “bad” forces. These stories provoke deep conflict in the reader’s mind. Who is really the bad guy here? Was there ever truly a good guy? Why do so many people still believe that a living being can or must be exclusively good or bad? 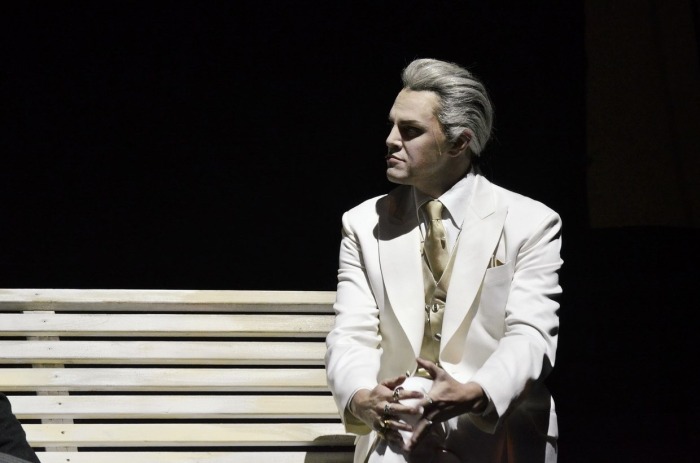 Portrayal of  Voland, courtesy of seriousrussianfrau1

The Following
For decades, the most devoted Master & Margarita fans have been researching and tracing the steps of characters in the book to real live places that still exist around Moscow, and that is exactly what my heart was set on doing while I was there.

The first stop was at the peaceful Three-Pond Lane, Tryokhprudny Pereulok, in northwestern Moscow’s Patriarch Ponds. This is where the book begins.

There is only one pond now, but the name was kept to honour the park’s history. Back in the 1920s there was a streetcar terminal and tram route that circled the park along Mayakovskaya ulitsa (street) but it has been extracted.

Master & Margarita is so closely woven into Russian culture that the government allows images of characters to be used on signs like this light-hearted warning about talking to strangers.

On Bolshaya Sadovaya ulitsa, the competing Bulgakov House and Bulgakov Museum are stacked on top of each other. Outside you will find sculptures and art installations based on characters from many of Bulgakov’s books, including Koroviev and Begemot below.

The marquee of Bulgakovskiy Dom, the House of Bulgakov, which officially became a museum in 2004. He lived in Apartment number 10 and based many descriptions in his books off of the interior and his time there. 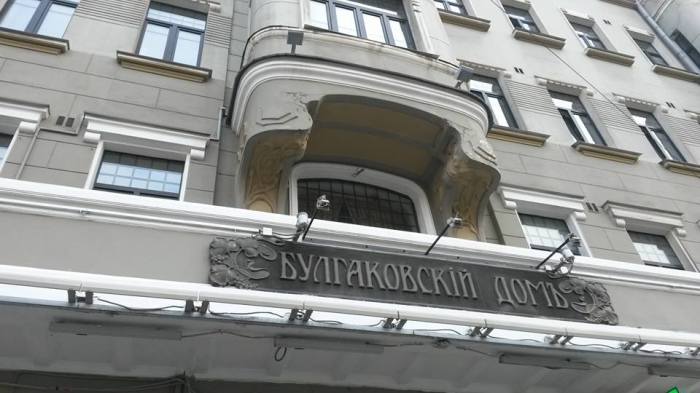 Walking upstairs to Apartment number 50, the Bulgakov Museum, you will find the walls, steps, and windows filled with drawings and odes to Bulgakov from fans. Visitors are allowed to sign their names and/or contribute appropriate messages.

The Bulgakov Museum hosts the typewriter Bulgakov used for many of his compositions, furniture and manuscripts he left behind, among other items.

Also on display is his first published edition of Master & Margarita. 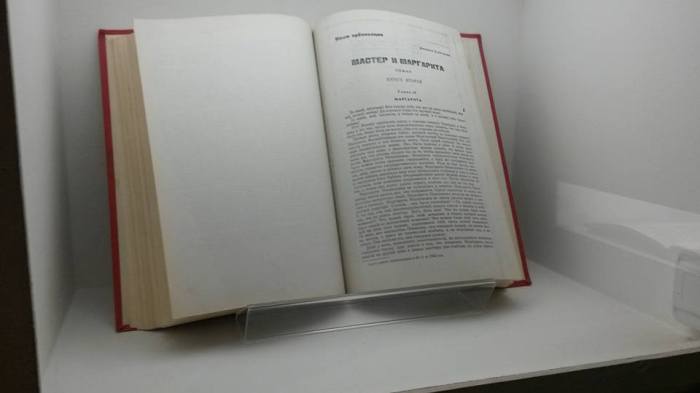 There is a passageway outside the building full of etched glass with black and white depictions of scenes from the book.

The Satire, known back then as the Moscow Variety Theater, is where Voland pulled one of his most hilarious and horrific pranks in the book. 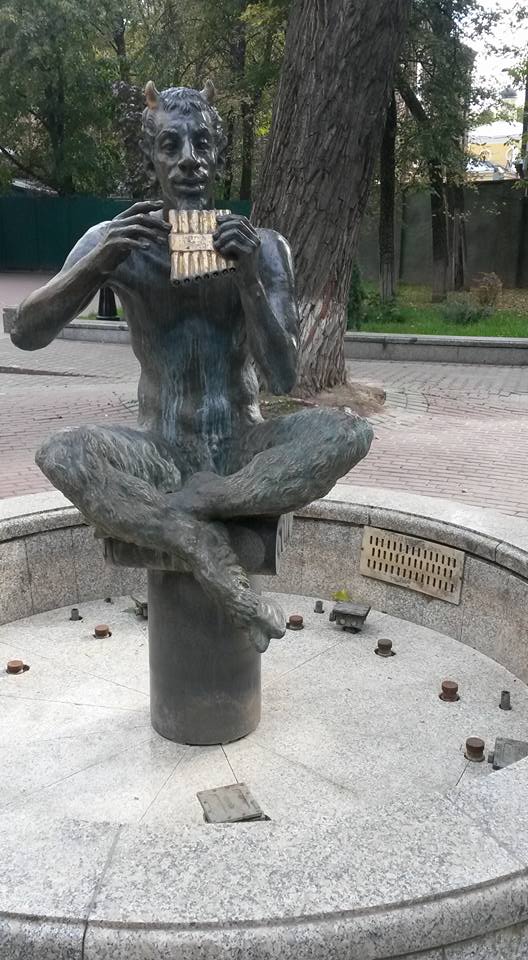 In the courtyard of Triumph Square, you will find the Aquarium Garden. 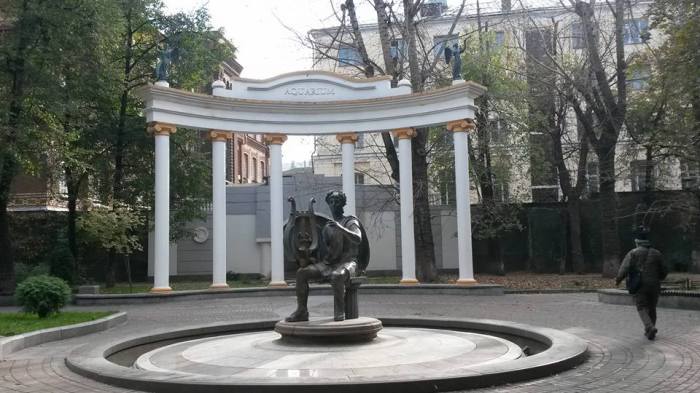 A nearby cafe dedicated to Begemot is full of drawings and paintings of the rowdy beast.

For more information and sites to visit check out this and this link. You can also find a few more places of interest in the Arbat. 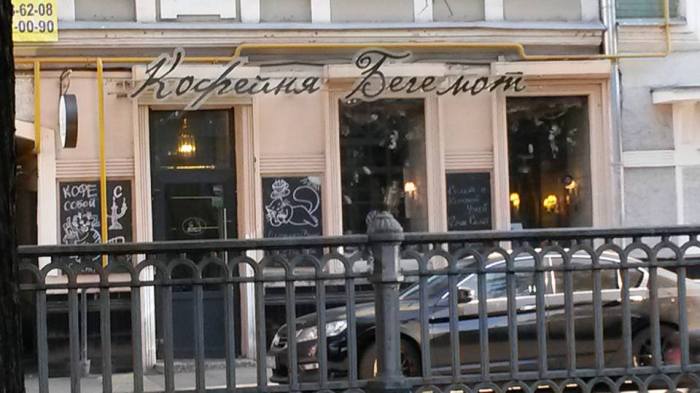 You can view the popular television serial with English subtitles here:

In recent years, Master & Margarita has even been reimagined as a Broadway musical and it is INTENSE:

Russian rapper Basta, who I wrote about in my From Russia With Rap blog, has even paid tribute:

If you prefer audio books, Youtube has a free English-language collection of videos- 33 consecutive videos that are around 35 minutes each.

The Next Step
After Master & Margarita, do yourself a favour and read Heart of a Dog. It follows suit of his sharp political satire and wise observations about both Russian culture and the dark side of humanity with the added science fiction element. Heart of a Dog was a quick read for me, but I had to read it again immediately.

Obviously I am not the only one who was captivated by its chilling and devastating message. A whole slew of other artists, as I have learned while writing this, including myself have written songs inspired by the collective works of Mikhail Bulgakov. 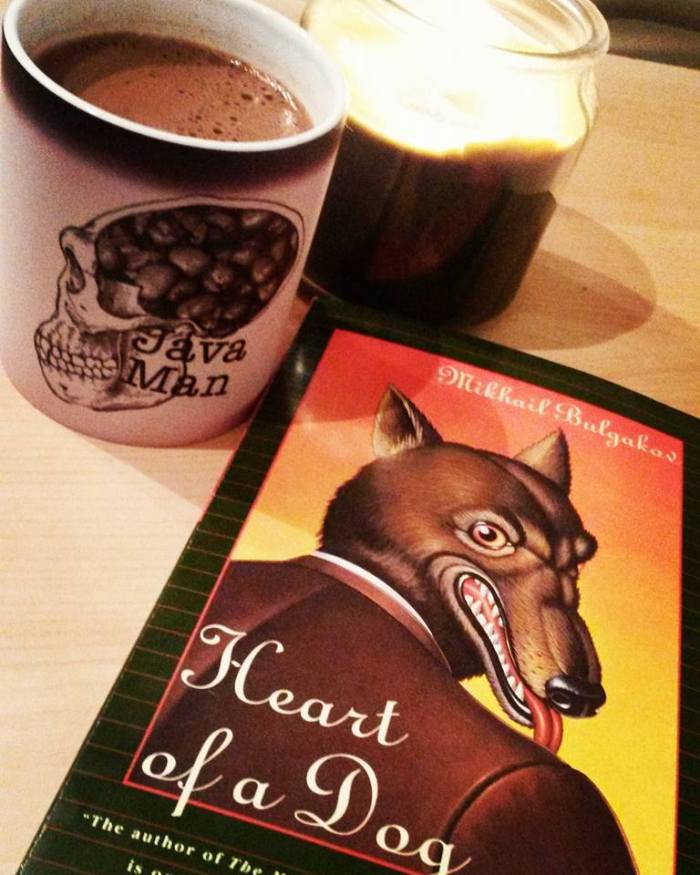 “Eyes mean a lot. Like a barometer. They tell you everything-they tell you who has a heart of stone, who would poke the toe of his boot in your ribs as soon as look at you-and who’s afraid of you. The cowards – they’re the ones whose ankles I like to snap at. If they’re scared, I go for them. Serve them right.” Bulgakov, Heart of a Dog

“Cowardice is the most terrible of vices” -Bulgakov, Master & Margarita

4 thoughts on “Cowardice is the Most Terrible of Vices: Bulgakov’s Moscow”