My friend owns a rad brewery in Knoxville and I always enjoy hearing her educational anecdotes and commentary on the brewing industry and processes. She was the perfect companion on a craft beer tour of Haywood County, North Carolina; the county that encompasses Maggie Valley, Waynesville, Lake Junaluska, Canton, Clyde, and other communities.

Within a few miles’ radius there are three local breweries- Boojum, Frog Level, and Bearwaters, plus a number of bars and venues that serve their brews. You can also find several wineries, vineyards, cideries, and distilleries.

My pick for this blog is “Beer, Beer” by Korpiklaani:

Boojum Brewing
Our first spot on the list was Boojum Brewing, which is located directly on Main Street and boasts 16 taps of their own delicious beer brand. Most of you already know that I am not an IPA or hops fan, but I was pleased with their diversity. 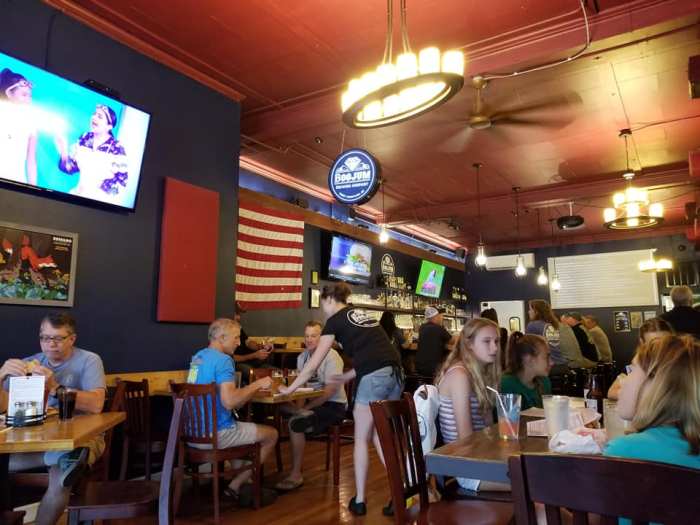 I had the Hounds of Helles, a Bavarian-style light lager, and the Triclops Tripel, a Belgian Trappist- style yeast ale. Our server was able to procure a sample of the Total Cave Darkness Imperial Stout but the tap had unfortunately just ran out.

The Legend of Boojum
According to the brewery, Boojum was a mystical 9 feet tall creature covered in grey hair. Half mountain man and half Sasquatch-like beast, he liked to drink his home brew, hang out in caves with his woman, and roam around collecting sparkly things which he was known to stash all across the Smokies.

Like most crypto specimens, he was forced into hiding from hot pursuit, rarely to be seen again. I want to believe…

The Gem Bar
Boojum has a 21+ club located below the brewery called the Gem Bar, keeping with the theme. We were treated to a brief private tour since we would not be able to return during its open hours, and we enjoyed the low-key atmosphere underground. 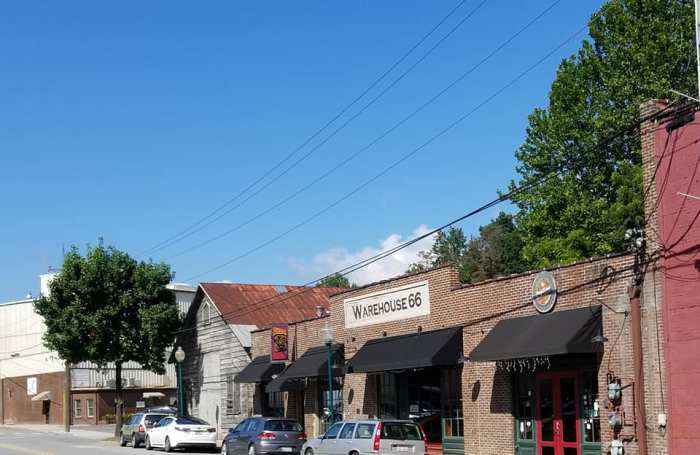 Inside Frog Level it is lively and spacious, with red brick walls and various seating nooks.

Hopscotch, a “classic Scottish ale with a rich malt, a little oak, a touch of caramel, and low hops” was delightful and immediately crave-able. My friend opted for a hoppier brew, the Salamander Slam citrus IPA. 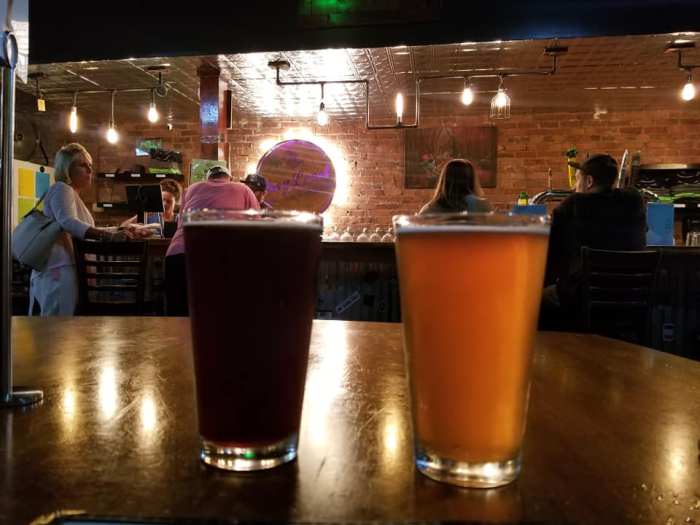 Several food options caught our attention on the “Canteen” menu. We decided on the beer brat with provolone and grilled onions, which was about average in quality, and a Cuban wrap.

I was skeptical about a Cuban served in a wrap instead of on grilled Cuban bread, but it was a delicious surprise. Other options included a pulled pork wrap, pimiento cheese wrap, Portobello wrap, a club, and a Philly cheesesteak.

My favourite part about Frog Level Brewing is the outdoor seating area they share with the neighbouring Panacea Cafe, with lots of mood lighting and a lovely view of the river. 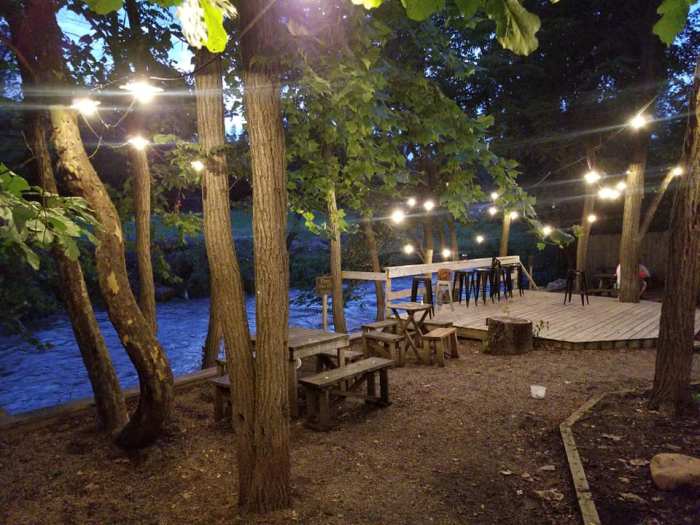 We took our time river gazing and being entertained by a cute duo playing a cover of Vulfpeck’s hit “Baby I Don’t Know.” 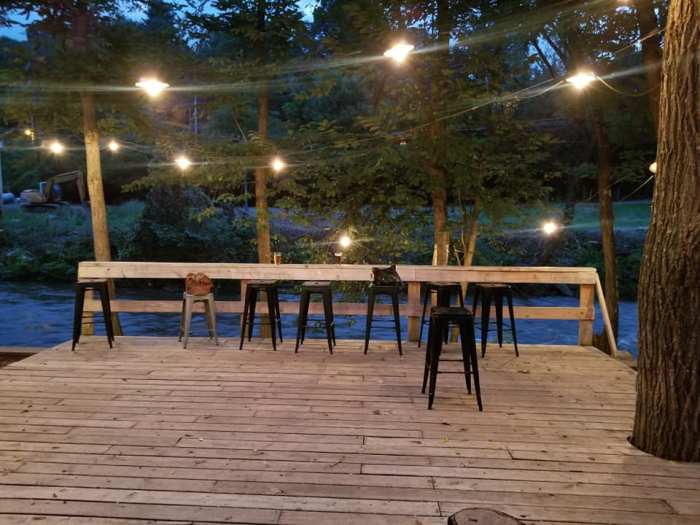 Bearwaters Brewing
This Canton-based Bearwaters Brewing remains an unturned leaf on our list, but here is what I know. I spent a pitiful amount of time lamenting that I could not try the Heavy Cream Milk Stout I had been dreaming of all day, and then to make matters worse, I learned they brew their own tantalizing Pilsner, Hefeweizen, ESB, and a Pumpkin PRD Red Ale. Pitiful face.

Bearwaters has a spacious outdoor seating area and sits right on the Pigeon River that its restaurant is named after. I learned an interesting tidbit on the website too; Haywood County bodies of water all originate within the county with no external sources. That typically makes it difficult to maintain excellent water quality.

Bearwaters prides themselves in being responsible stewards of their waterways, working to “protect and conserve our unique and critical water resources by focusing on the reduction of non-point source pollution through public education, community engagement, and restoring degraded streams.”

I anticipate my next visit to Haywood County and the opportunity to support a worthy cause in such a beautiful location. Check out this video:

Mad Anthony’s
In downtown Waynesville, billing itself as the premier venue for craft beer, is a funky taproom right off Main Street. Mad Anthony’s does not brew its own beer but proudly supports and promotes the best regional and local brews around. 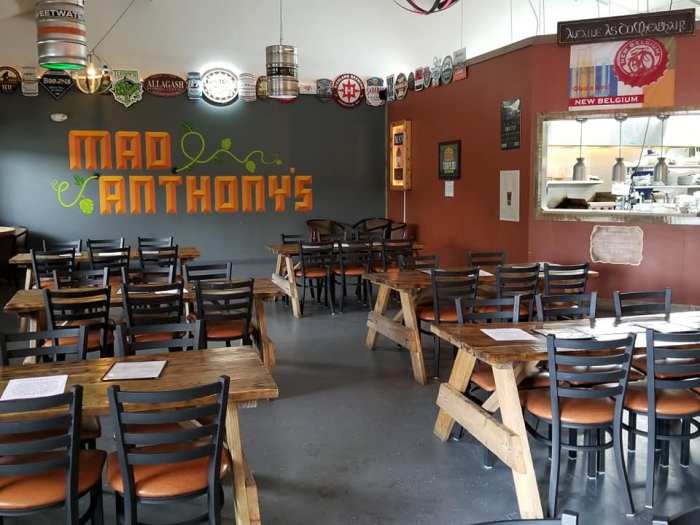 They carry over 50 craft beers and wines of all varieties, conveniently colour-coded based on style. For example, the Belgian/German style beers were in Green, Pilsner/Lager/Wheat beers were in yellow, and Porters are in purple.

This made it easy for my probably-needs-to-wear-glasses ass to narrow down options and eliminate eye strain / anxiety when presented with such an extensive selection.

Seating is plentiful indoors with a small patio outside. We shared these roasted pork belly and mango tacos with a side of grilled corn. Very simple and comforting.

I heard many great things about Elevated Mountain Distillery, but wanted to focus on local breweries and local craft beer for this trip. If you are in the area for a few days, follow me on a little half hour dash to Sylva!