Chattanooga is known for being an outdoor lover’s paradise, a modern tech city with dizzying internet speed, home of a Volkswagen plant, Finley Stadium, and a place full of Native American and Civil War history.

The city is full of attractions known around the world like Rock City and Lookout Mountain, the Tennessee Aquarium and others.

Touristy downtown falls mostly in the Riverfront and Bluff View districts, but we explored parts of the Northshore district across the river and a few stops closer to the city center. Check out my blogs about Chattanooga’s Southside and MLK District (in progress) if you are interested in stepping outside the main attractions.

My song for this blog is “Weeping Song” by two of my favourite artists, Blixa Bargeld and Nick Cave, previously known as Nick Cave & the Bad Seeds:

RIVERFRONT
The Riverfront District is the area between Ross Landing to the north and 4th Street at its southern boundary, and from the AT&T field over to Walnut Street. Of course, the highlight is the stretch that runs along Riverfront Parkway parallel to the Tennessee River itself.

Park and walk the Tennessee Riverwalk trail and visit Ross Landing or the Riverfront Park/Playground to take in the views.

In this area, you will find the Tennessee Aquarium and IMAX theatre, several big chain hotels and restaurants, and a great pub called Hair of the Dog.

The coolest place in the Riverfront is The Passage and Weeping Wall, an interactive monument to the Cherokee & Trail of Tears. 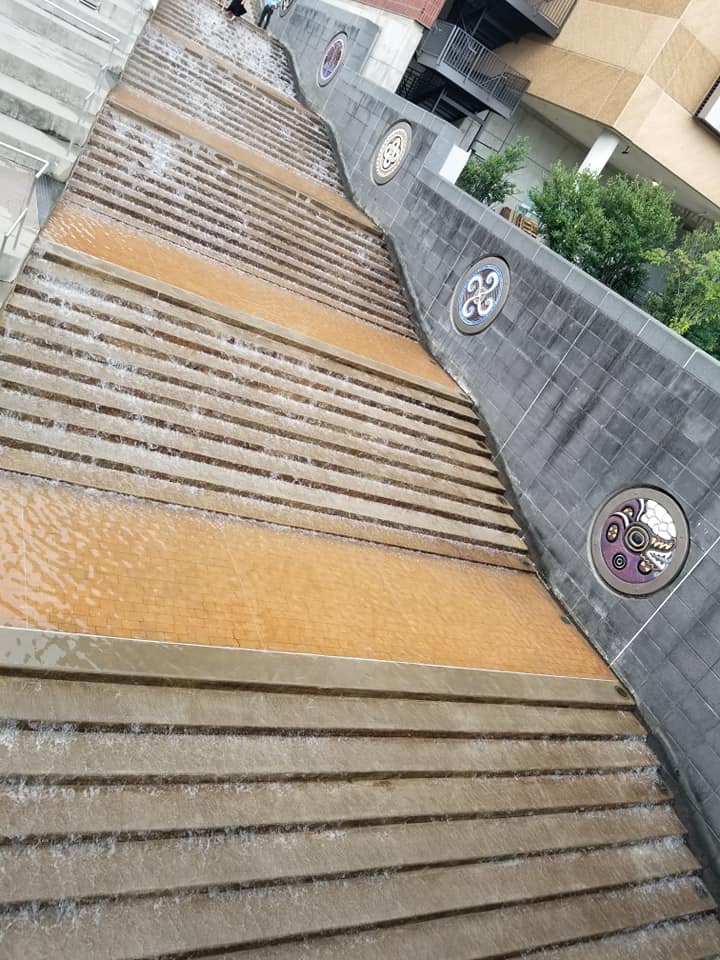 The Passage is a pedestrian walkway connects the Tennessee Aquarium to the Tennessee River. Its Weeping Wall, a series of stairs under running water is in tribute to the Cherokee who suffered and died during the Cherokee Removal Act, usually called Trail of Tears as an understatement.

Embedded in the walls of the Passage are giant discs designed by Cherokee artists. There has been serious controversy over the style of art chosen, accusing the Cherokee of cultural theft of the Mississippian/Yuchi/Muskogean tribe they fought and conquered prior to the Cherokee Removal.

Read more about that story and what each disc symbolizes here.

Ross Landing is considered to be the start of the Trail and one of two most significant related sites, second to Blythe Ferry.

Several plaques and statues tell more about the tribe members and mark specific points of interest near Ross Landing.

Watch this video if you are interested in learning more about Cherokee history in the area and the early days of Chattanooga:

Despite its grim history, this area is a popular location for families to run, play, climb, and splash around in the water. I would venture to say most tourists are blissfully unaware of its purpose or the symbolism.

You can definitely get a workout exploring all the stairs, walkways, and trails downtown.

This bridge was built in 1891 and has been reserved for pedestrians only since 1978. At nearly 2,400 feet long, it is one of the longest pedestrian bridges in the world. It was the first civilian bridge built across the Tennessee River and was the first truss bridge of its kind, frequently used as a model for future constructions. 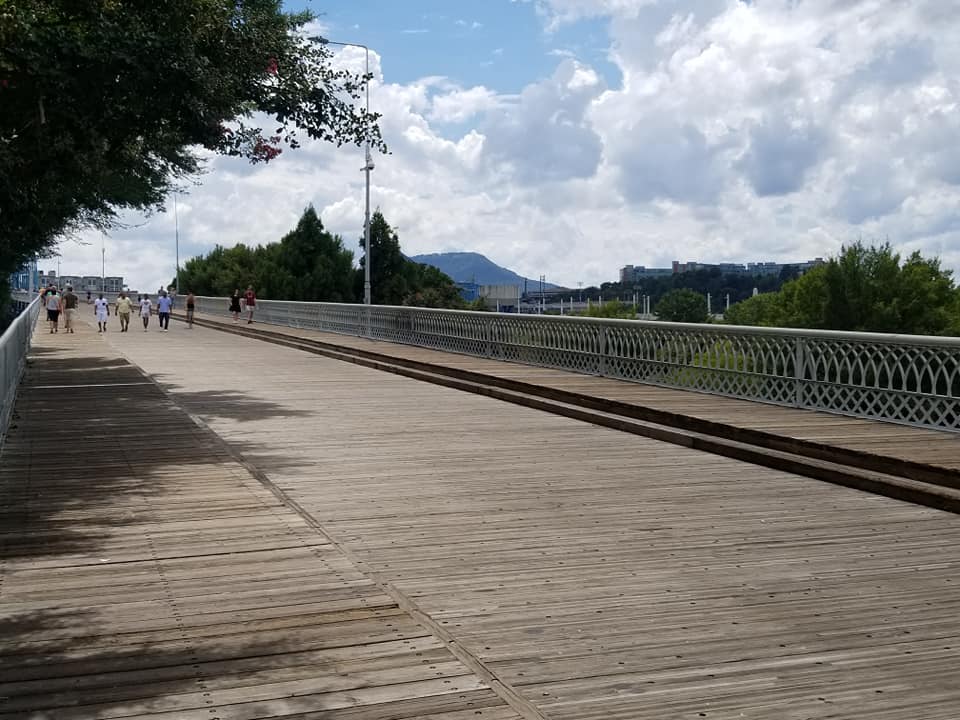 Notice Maclellan Island, a birdwatching haven and nature preserve of nearly twenty acres, as you cross the bridge. Visitors can only access it by water, and I would encourage you to read/review warnings and to make a reservation with the Chattanooga Audubon if necessary before you go.

The Northshore District runs along the Tennessee River opposite Ross Landing and the Riverfront, from Coolidge Park over to Highway 27. It extends north up to Stringers Ridge Park and northeast of Hill City, but we only visited a few places closest to the river. 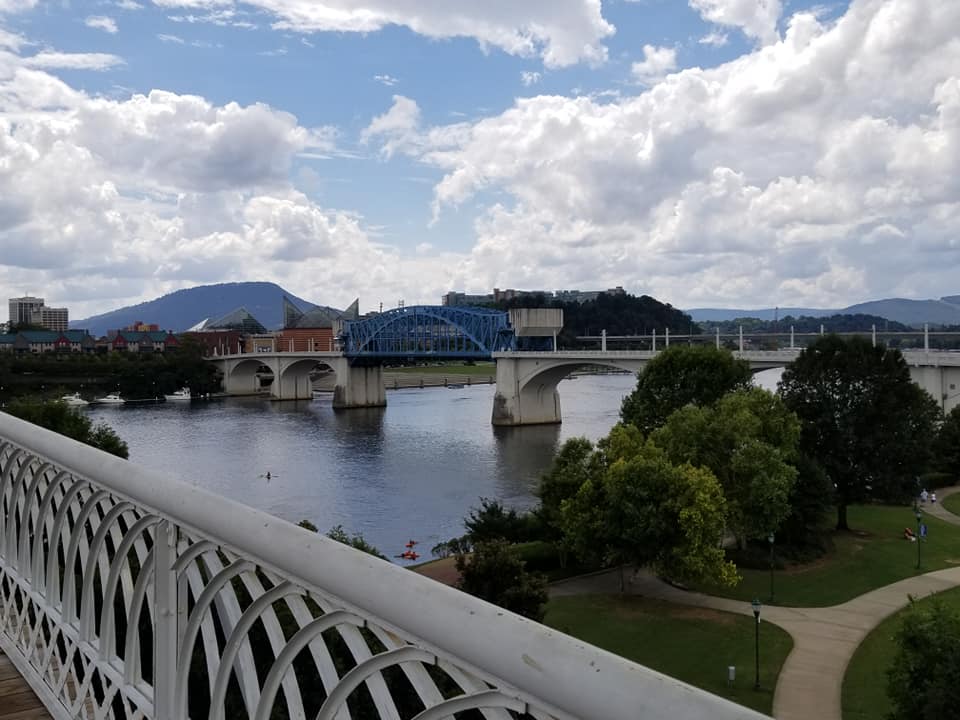 Coolidge Park and Renaissance Park are closest to the river, and Coolidge Park has an awesome carousel. For some reason, the Chattanooga.gov and Parks & Rec sites have been down for some time, generating only a 404, so I can not link to anything official.

There are some boutiques, antique and vintage shops, the Winder Binder Books, Art, & Music store, and the Walnut Street Bridge gift shop near the entrance of the bridge. The Tennessee Riverwalk also runs along this side of the river as well, so it might be a better alternative for relaxing if the Riverfront is too crowded.

My best friend and I both share a love of German food so we made a beeline to Brewhaus, whose motto is “Alles hat ein ende, nur die wurst hat zwei” meaning “everything has an end, only sausage has two”. 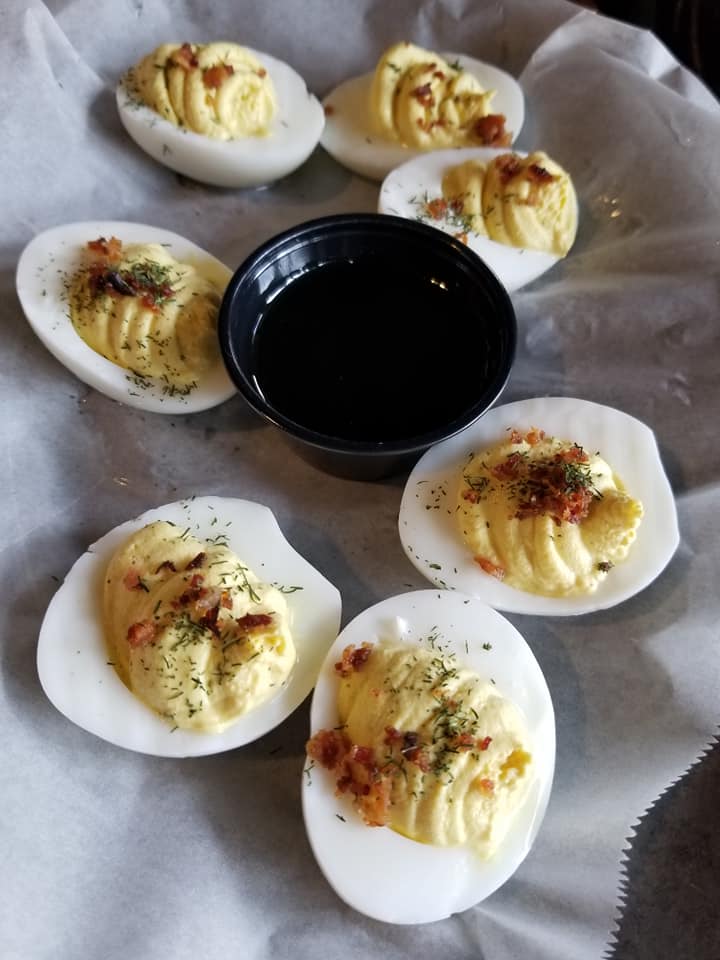 We shared the honey-bacon deviled eggs appetizer, Heidelberg patty melts, German potato salad, roasted Brussels with bacon marmalade, and a few ice cold lagers. All of the walking we did before and after lunch did wonders.

BLUFF VIEW ART DISTRICT
Back across the Walnut Street Bridge, we walked away from the Riverfront into the Bluff View Art District.

Bluff View is a small cluster of cultural spots including the Hunter Museum, Houston Museum of Decorative Arts, Rembrandt’s Coffeehouse, the River Gallery & Sculpture Garden, a few shops, and some pretty green spaces.

Rembrandt’s Coffeehouse is the kind of old European(style) coffeehouses I love visiting overseas, with the feel of those coffeehouses I spent most of my free time in during the late 90s and early 2000s. They are so hard to find anymore.

I believe my sentiments are common, based on the number of people who are always packed into this place. Rembrandt’s has some incredible looking pastries and sweet drinks, and still serves a perfect plain and simple latte.

Outside there is a large courtyard and various other ivy and wisteria-draped pergolas, small gardens, and winding stone steps.

Next door is the Bluff View Bakery with a large demonstration window and across the street is the Houston Museum of Decorative Arts, which displays the collection of Great Depression era glass, serving utensils, furniture, and other antique items owned by a late Chattanooga resident Anna Safley.

Across the street from there is the Hunter Museum of American Art. Even if you do not go inside, there is quite a lot to do on the property.

From other places in the city, this giant stone structure sitting high on the hill could be part of a scene from Beetlejuice.

The museum looks out over the river and the rest of the town, and has an insane hairpin path leading up to its ground level and other parks and trails nearby. 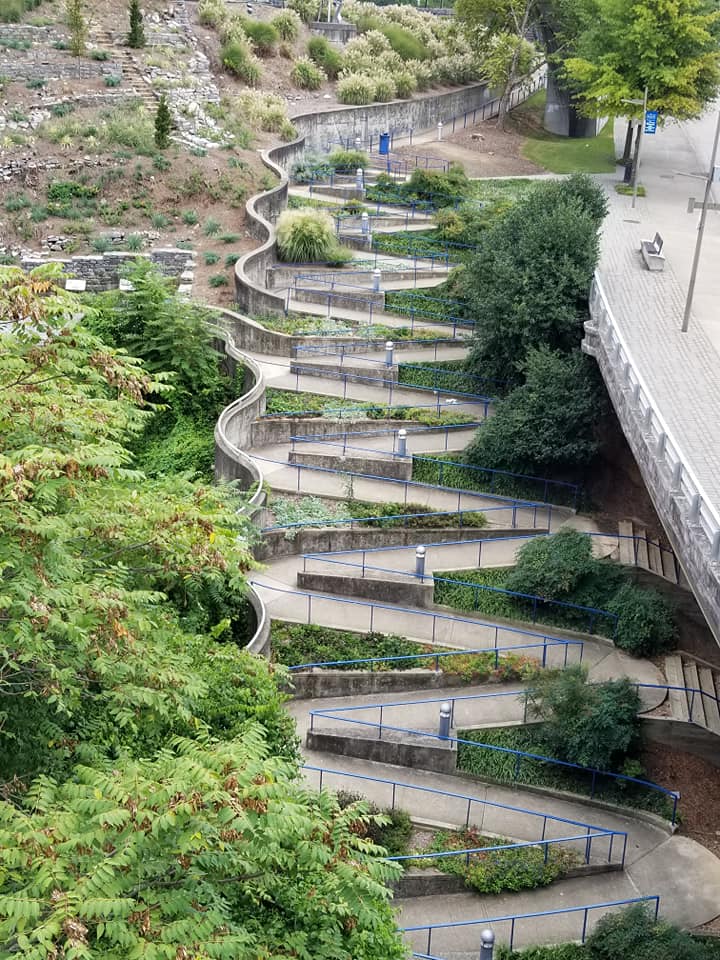 No matter where you are on this property, there are some stunning views and interesting sculptures. 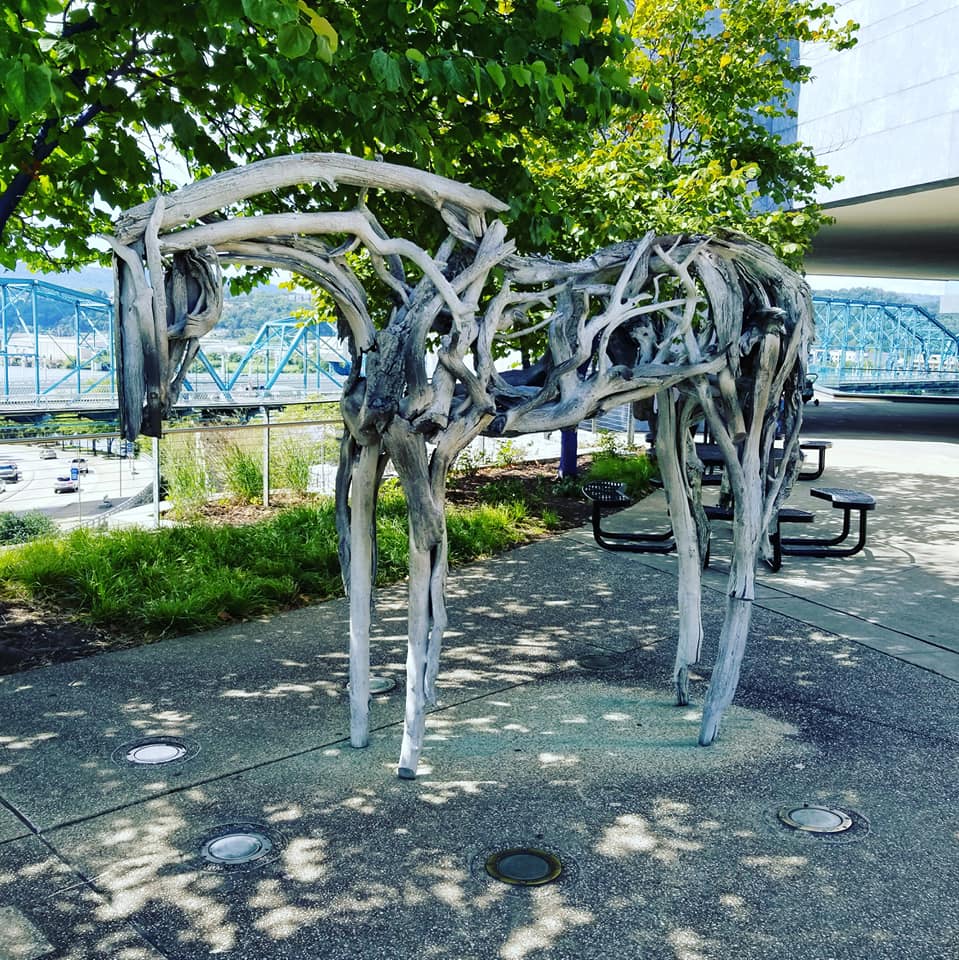 After walking around in the heat for a couple more hours, we stopped at The Ice Cream Show for a treat.

Beyond Downtown
The Chattanooga Market is technically closer to the Southside District, just west of Southside Social and Finley Stadium. It’s a hip downtowner thing to do though, and one of the largest outdoor markets I have been visited.

These photos were taken before the impending doom of Covid-19 arrived, so no one is masked and the crowd was substantial.

Unlike most farmers markets, this is a permanent fixture that partners with other venues and festivals. You can visit the Chattanooga Market here at the First Tennessee Pavilion on Carter Street regularly, but you can also find affiliated events and many of the vendors set up at multiple sites simultaneously. 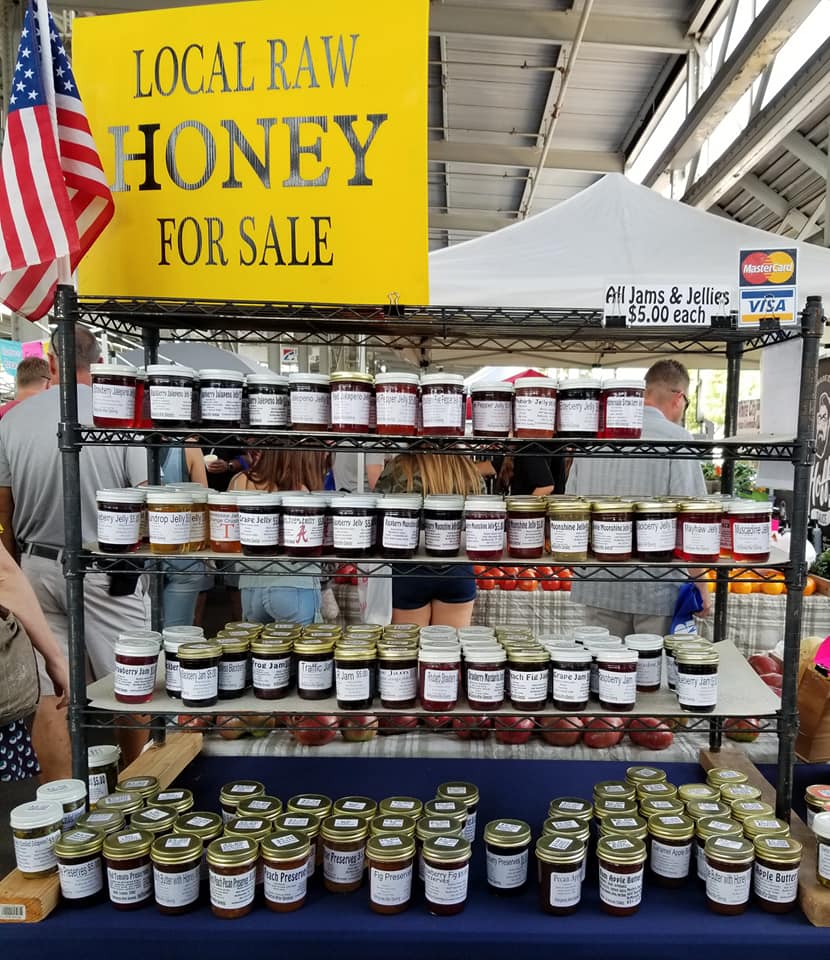 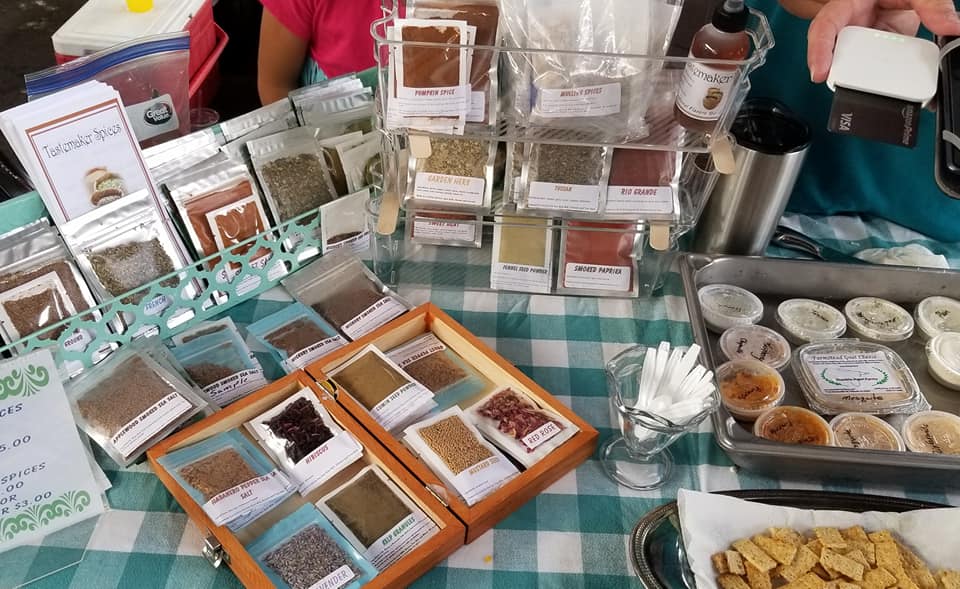 Handmade bath and body products, pottery, paintings, jewelry, and other goods are on display as well. 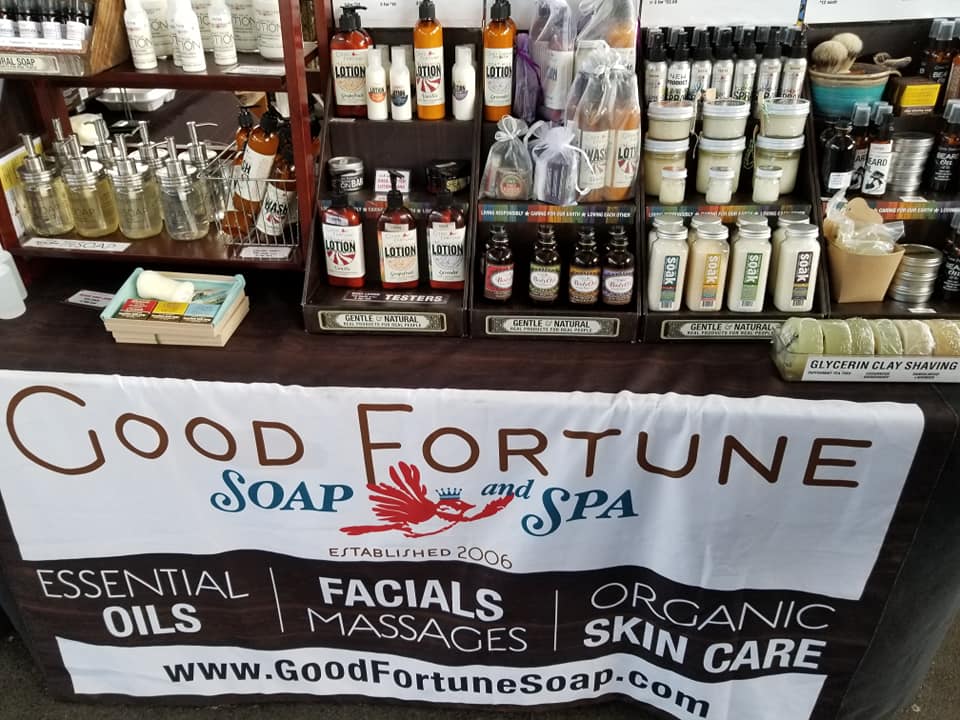 Several food trucks and vendors are set up inside but primarily outside the main building on the pavilion. You can catch additional extensions of the Chattanooga Market over near Erlanger Hospital, the Riverfront, during the Street Food Festival or Chattanooga Oktoberfest, or check out their daily schedule here.

Lookout Mountain
The name Chattanooga comes from the Creek Indian word for “rock coming to a point” which refers to Lookout Mountain. Three main attractions on Lookout Mountain are Ruby Falls, the Incline Railway, and Rock City, famously painted across barns and billboards all over the United States.

You can read about our trip to Rock City here.

Moccasin Bend National Archeological District access is primarily restricted to the “Gateway” which is the meadow below that looks over the river, or visitors can take the Blue Blazes Trail or the Brown’s Ferry Federal Road Trail that leads around the site.

If you are more interested in reading about the history and archeological findings here, check out the website.  You can also visit the Lynn H. Wood Archaeology Museum a few miles outside of town.

Dwell Hotel
One of my favourite places in Chattanooga is the Dwell Hotel, a surprise my best friend planned because she knew I would love the botanical motifs, the astrological-themed offerings, and everything else about it.

The lobby is split into several large seating areas that wrap the front desk and lower level on all sides. You can chill out, order drinks, snacks, or go to the back for full meals.

Each room is uniquely vibrant and lush.

People often reserve parts of the lobby or individual rooms for photoshoots so mind your manners.

Think Mod meets tropical tiki-style bar and restaurant without the wooden masks or tacky cartoon accents. Sunlight fills the room, and everything is made with fresh fruit and flowers. Syrup & Eggs restaurant is currently the restaurant in residence, a change since we visited.

To the left of the entrance is a more low-lit, spooky romantic side. They call it Night Pearl now, but at the time served fancy cocktails like The Void, Retrograde, Luminary, Zodiac, On the Cusp, or Midheaven.

I like that there have been so many changes and look forward to visiting again soon to take them all in.

If you are into Civil War history of the Chattanooga area, check out some of the Stephen Ambrose Historical Tours, the National Park Services’ guided battlefield tours, or book one with Battles for Chattanooga.

There are so many more places to see in Chattanooga on future visits, and so many ways to get around town while you are there. 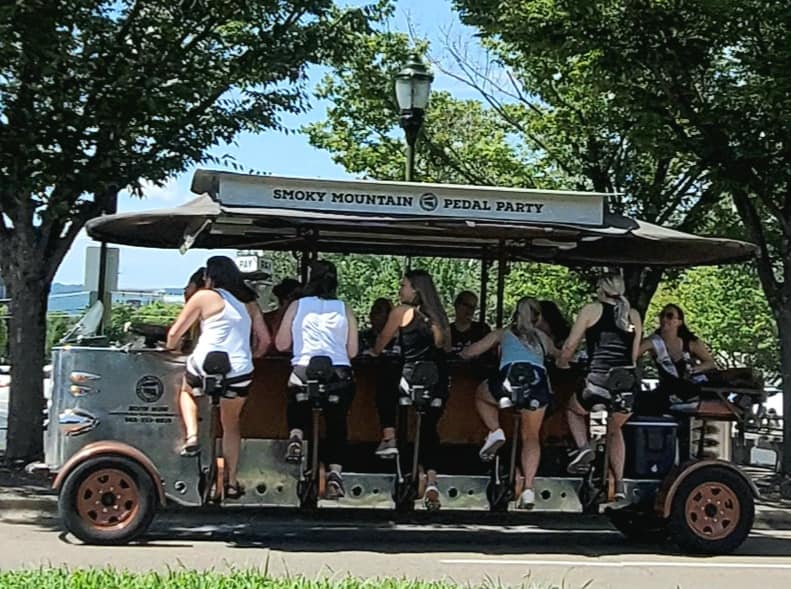 Consider one of those ridiculous pedal party tours if you plan on touring the breweries, rent a bike, or better yet, hop on the free downtown CARTA trolley.

Nothing beats some fancy footwork around town, though.

In the area for a while? Follow me to Chattanooga’s cool Southside District.