I never imagined that I would spend the turn of my third decade in Moscow’s Red Square, until it happened.

Visiting Russia had long held a top spot on my bucket list but always seemed out of grasp. When I earned my TESOL/TEFL certifications a few years ago, I started tutoring in English and German online. It was unexpected when a man in Moscow reached out. He wanted to improve his English and in return taught me to speak Russian.

Fast forward a couple years to when the stars aligned.

I landed in Domodedevo after dark and was escorted to my temporary home on the famous Tverskaya ulitsa (street) in downtown Moscow. I felt all the grandeur of an Imperial Tsarina gazing out at the glittering night and… I was stunned.

Back then, I had not yet started traveling with intent to write about it, so my collection of photos falls short compared to my memories. I spent my time in Russia starry-eyed and feeling drunk on the dazzling unfamiliarity of it all.

My song for this entry is none other than the Russian National anthem. This video has some great views of Red Square as a man bursts into song, and within seconds people from all over the square rush to join him. It appears to have been filmed on Russia Day, appropriately, and is very touching.

It also makes me smile every time I hear it because I recall one night in Moscow when a man challenged me to a hilarious singing contest and I totally shocked him when I nailed the chorus.

Moscow is a wide, open, opulent city.  Each day we set out early and stayed out late, covering as much of the city as our bodies could handle. Many nights were spent over drinks and deep conversation in an intimate VIP lounge with friends. I had unsurprisingly caught a cold but pushed through it.

One particular day, we had spent a couple hours walking around the Kremlin before visiting Krasnaya Ploschad, the Red Square.

Iberian / Resurrection Gate
We entered Red Square through the arcs of the Iberian aka Resurrection gate- a remnant of the Kitai-gorod. On either side is the Moscow City Hall and the State Historical Museum, with the small Iberian chapel in the center. You can hear choirs singing from up above throughout the day. 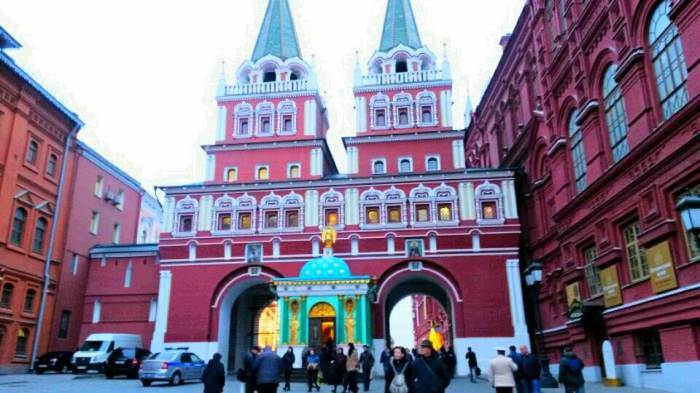 If you look to the right in the photo, you can see the Lenin and Stalin impersonators that keep making headlines for brawling and their epic ongoing feuds.

These nutty faux dictators often get in fights with each other over encroaching territory, unfair pricing, and with drunk bystanders who heckle them. Read more about that here, here, or even here. 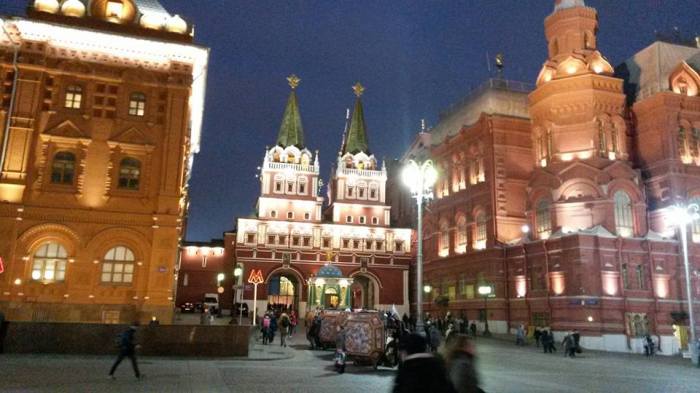 The Iberian Gates at night

Lenin’s Mausoleum
To the right is Lenin’s Mausoleum, with its backside against the Kremlin wall. When Vladimir Lenin died in 1924, he was embalmed and buried in a red wooden tomb for public mourning ceremonies. He was briefly moved to Siberia during the war in 1941 but returned soon after, and has remained since.

His successor Joseph Stalin died in 1953 and was buried inside the tomb for several years, until the passing of Khrushchev’s Thaw and the era of de-Stalinization. Stalin’s body was then relocated to the Kremlin walls.

Lenin’s mausoleum has been rebuilt by many different architects since then, with different textiles, shapes, and increasing size. The top is often used by officials during public ceremonies. You can see the red brick and yellow walls of the Kremlin directly behind the mausoleum. 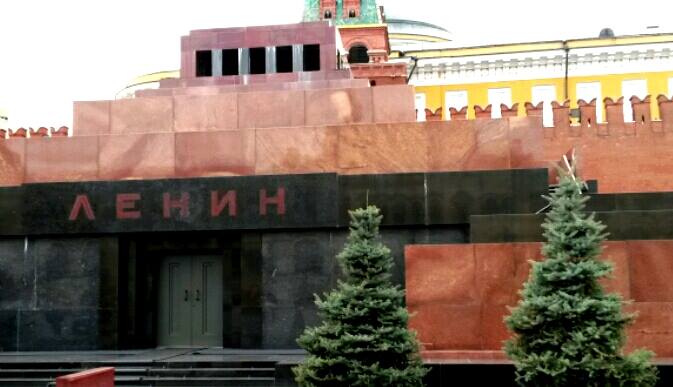 GUM
To your left is the massive GUM (Main Universal Store), pronounced more like goohm. Historically, GUM centers served as the State-controlled department store for living essentials across the USSR but now you can find the same luxuries and brand names offered around the globe. 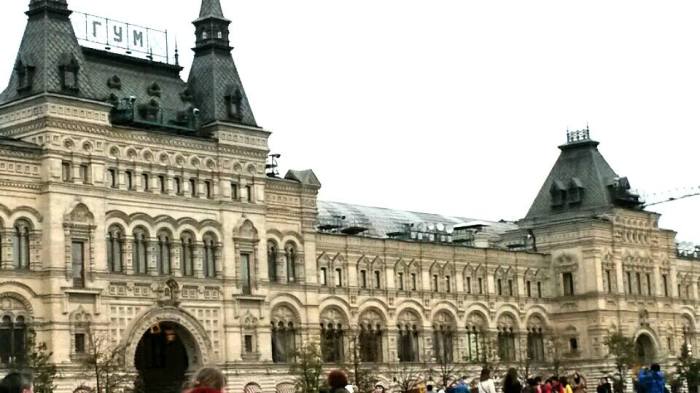 The Moscow GUM is made of granite, marble, and limestone, and it is also the largest, most famous location. When Stalin took power, he shut down GUM and moved his party officials in. He tried to have the building demolished but thankfully it remained.

For Russian people, GUM is a symbol of freedom from oppressive Communism and a manifesto for progress- the ability to buy the things they want, participate in fashion, art, culture, music, and global commodities.

Inside, we ate at the Stolovaya #57, a retro Soviet cafeteria. It is a self-serve line where you grab a tray, open glass doors, and take whatever your heart desires. My favourite item was what essentially translates to a carrot fritter- mashed carrots, garlic, onions, and herbs rolled back into carrot form, then lightly breaded and baked golden.

This is such a wonderful way to delve into Russian cuisine for someone who is not familiar, and heaven for someone like me who already loves it.

Speaking of heaven, Vladimir Shukhov’s “Glass Heaven” is a super durable glass ceiling that stretches high above the shops, and was designed to let the light in and to support even the heaviest Russian snowfalls.

Inside GUM you will find multi-level shops connected with narrow bridges and main walkways packed with impressive sculptures. It is more of an architectural wonder than a shopping mall. You can read more about GUM on the official GUM site , from where I have shared this photo. 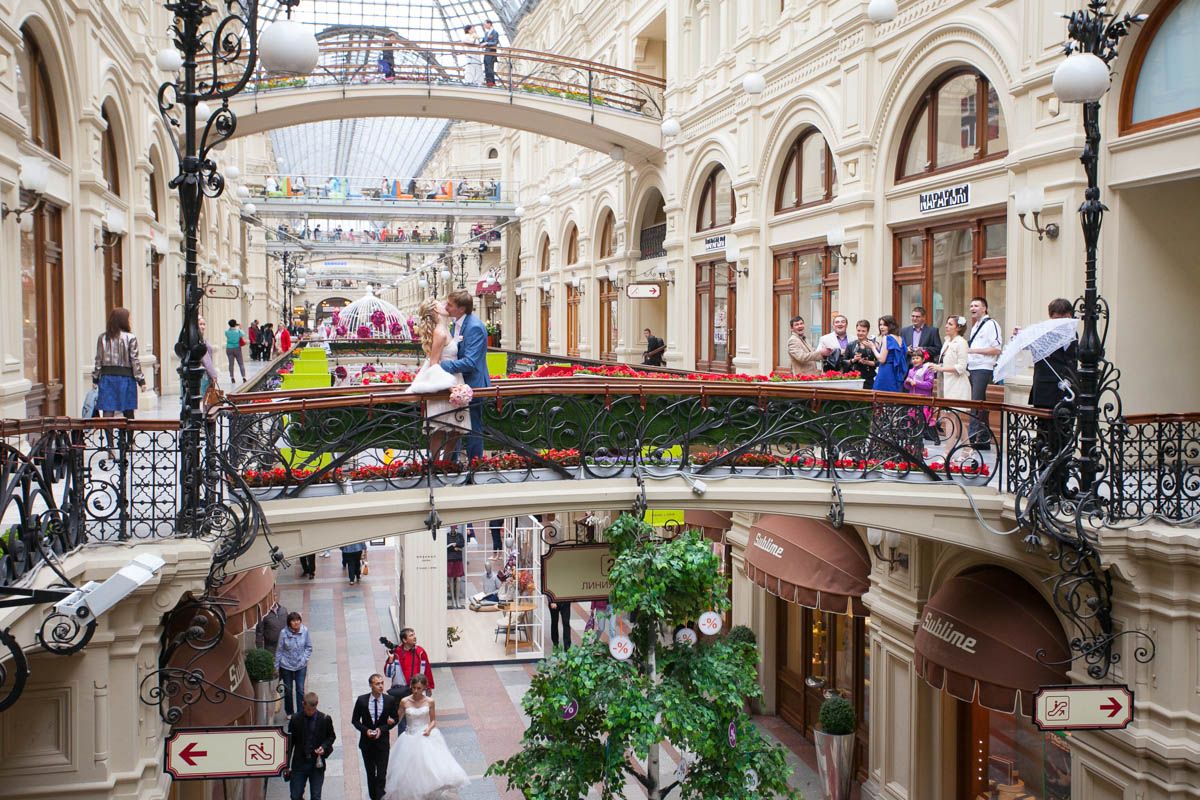 This photo is shared from gumrussia.com official site

St. Vasily’s Cathedral
The focal point of Red Square is Собор Василия Блаженного, known around the world by many names- Cathedral of the Intercession of the Virgin on the Moat, the Cathedral of Vasily the Blessed, or simply St. Basil’s Cathedral. 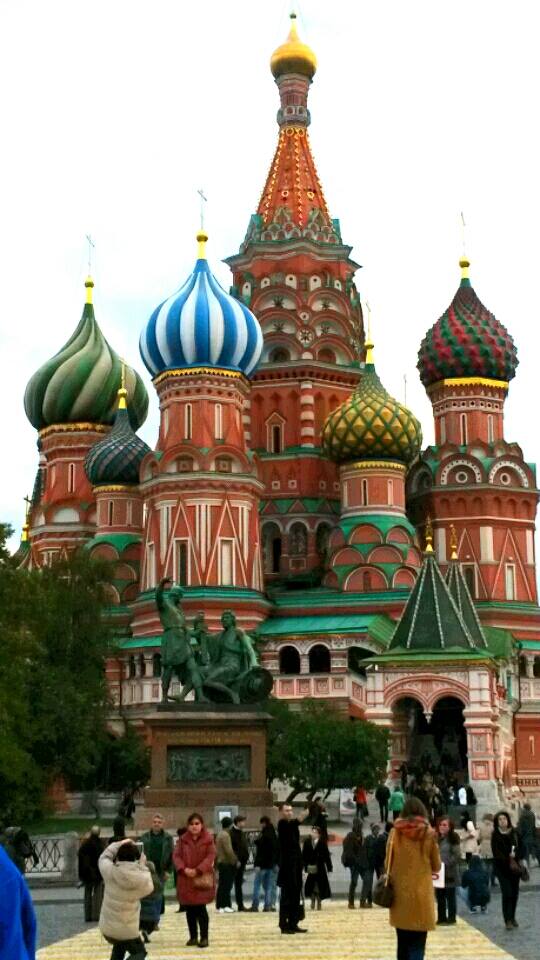 This church is actually eight smaller chapels built around a central ninth, and years later a tenth was added. It is believed that the church was originally white and gold to match those of the Kremlin, and two centuries passed before the vibrant colours were painted on the domes. St. Vasily’s is one of nearly 20 UNESCO World Heritage Sites across Russia. 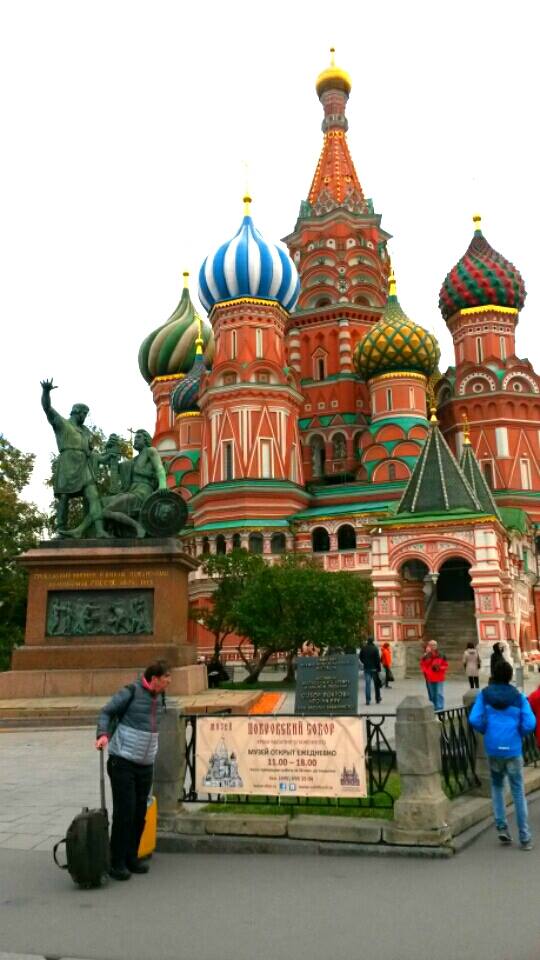 Many strange legends surround the construction of St. Vasily’s, which began in 1555 and continued for over six years. Hardly any are true.

Catherine the Great charged Ivan the Terrible with commemorating Russia’s victory in capturing Kazan and Astrakahn, and he also took the opportunity to pay tribute to a Wise Man named Vasily by having a tenth chapel build above his burial.

Vasily lived in poverty, giving everything he had to help others while calling out Ivan and other royalty on their own selfishness and corruption. Rumour has it that he really spooked Ivan with his prophecies, and the cruel Ivan became paranoid, created secret intelligent forces, and even murdered some of his own family members.

St. Vasily’s is now a museum and rarely holds any church ceremonies. It was confiscated in the late 1920s during a time of state-mandated atheism when it was taken from the Russian Orthodoxy only to be used as an annex for the state history museums.

While Russians are free to practice religion now, many of their sacred churches remain secularized properties of the state.

Crowds of people congregate at all hours around St. Vasily’s, where you can enter for a tour, listen to choral singing, check out the sculptures, or standby in awe.

Lobnoye Mesto
A large circular stone structure near St. Vasily’s is where Tsars and other leaders addressed their people and made major announcements. Lob (as in frontal lobe) translates to “steep riverbank” in old Russian but is the modern word for forehead,  and mesto means site or place.

Lob‘s ambiguous usage has stirred up a centuries old rumour about Lobnoye mesto being a place for executions, especially by sword or guillotine, but it has been proven false. 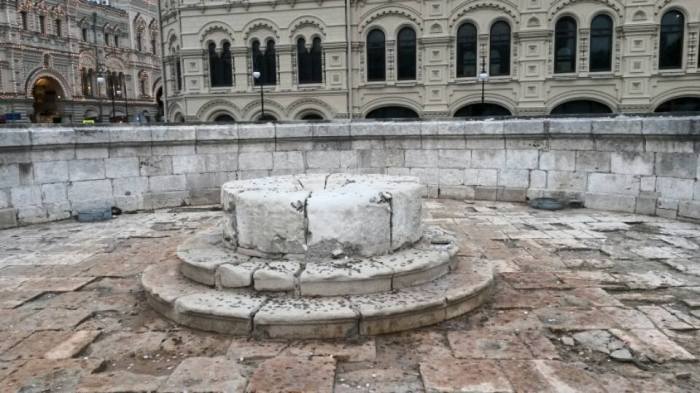 Kilometer Zero
Like many major global cities, Moscow has a site that marks its kilometer zero. Here is the exact place from which all distances away from the city are measured. This is the heart of Moscow.

You can see a video of this procession (and some rad kid mullets) here:

As you exit Red Square you will see the Kazan Cathedral to your right. This coral pink, sea foam green, and white church is a magnificent replica of the original. It was first built in the 1600s to honour the holy icon Theotokos of Kazan, demolished by Stalin in the 1930s, and reconstructed in the 1990s. 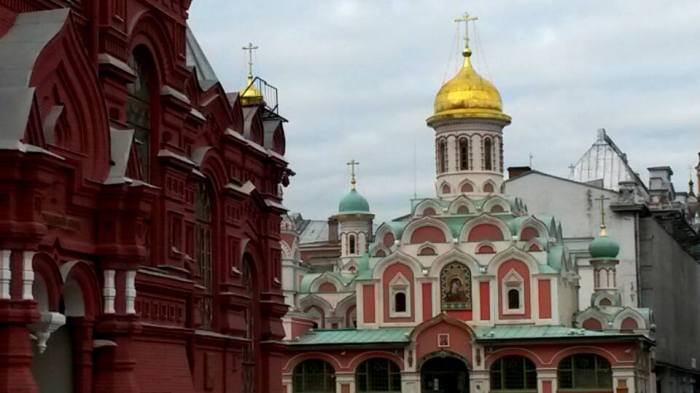 From St. Vasily’s, looking out over Red Square.

As the sun sets in Moscow, you will be delighted by all the surprise festive lights.

GUM lit up in the evening 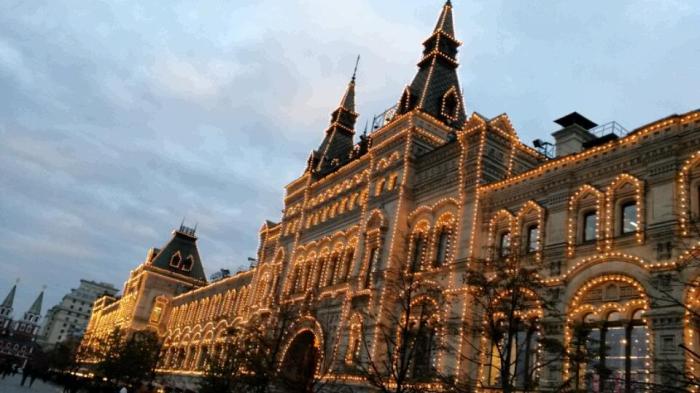 From outside the Red Square looking at the Resurrection Gates to the left, and the State History Museum in the center.

Krasnaya is used synonymously as both “red” and “beautiful” in Russian. It was difficult to pull myself away from the Red Square, as it seemed to evolve into something even lovelier the longer we stayed.

As we walked back that night I found myself humming this song by Russian band Kino (Cinema), “Calm Night.”

In the area for a while? Follow me to the Kremlin.