Chicago was my first taste of big-city independence.

Sure, I had traveled a bit before I reached my early twenties- as far north as Canada and as far south as the Gulf of Mexico. I took several summers in or trips to New Orleans, Biloxi, Panama City Beach, my Midwestern stomping grounds, and other places it’s probably fine I don’t remember.

But I was never completely off on my own until Chicago.

I first flew to Chicago for a job interview back when I was corresponding pretty intensively with various airlines. Things were getting juicy but then a giant unexpected merger took place.

The waiting list for new hires became unreasonably long, particularly for anyone wanting international, so I moved on to other career options.

I was privileged to have a friend/bandmate who lived in a high-rise condo overlooking the city and did not mind me sticking around for long periods throughout that process.

Our band had split up but we still entertained ourselves singing along to his guitar and laughing at endless inside jokes.

Chicago is often compared to Berlin in that they both share similar urban development and a tremendous number greenways, parks, and bodies of water.

Our reflections standing under Cloud Gate

Another similarity is a rich history in jazz, blues, vaudeville/cabaret culture, brilliant modern architecture, and layers upon layers of complex political and cultural history.

Open air exhibits and art installations can be found in every park, around every corner, and in every open space.

Printer’s Row is the first neighbourhood that I spent a significant amount of time in, and although it has gotten a bad reputation as of late, it felt safe to me several years ago.

My route to the L station

Just across the street from my friend’s place was Eleven City Diner. I couldn’t tell you how many times I have been there but I still have my prized coffee mug and shirt, almost a decade later.

The owner won me over with his easy-going manner and funny banter each time. He kept insisting that I should order French toast but I never really cared for it before. At Eleven they make their French toast with freshly baked Challa, sliced strawberries and bananas, and toasted coconut. I lost that bet. 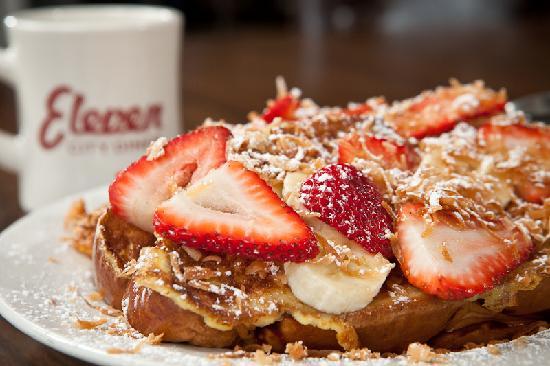 Later trips/stays in Chicago landed me in the Wicker Park and Ukrainian Village neighbourhoods. One friend lived right at the intersection of Damen & Division, an area I soon knew “like the back of my hand.”

We spent many nights at Fat Pour, Bangers & Lace, Rainbo Club, and my favourite Gold Star Bar. Deep dish pizza is such a polarizing item but any time I am back in the Midwest, I can not turn it down.

I obsessively walked an area called Pollonia (or Polish Triangle) getting to know all the dives and diners, odd shops, and old houses.

We found everything we dreamed of at Podhalanka Polish Restaurant in Pollonia.

Lincoln Park and Ravenswood are two overlapping neighbourhoods I loved in a historic district a few miles north of downtown.

Originally this was a large German settlement and you can still find plenty of German restaurants, beer gardens, schools, and German speakers here. It is a craftsman village community full of beautiful antique homes.

No visit to Chicago was complete without a stop at Navy Pier with its long lines, overpriced margaritas, and greasy food.

I forget the name of the hotel we used to go into but there is a restaurant on the top floor, and the womens restroom has the greatest view in the city.

These memories all seem pretty distant to me now. It’s been about six years since I have been to Chicago aside from connecting flights at ORD.

My time there was before I joined Instagram and when I had just started using Facebook, so there was no compulsion to snap photos of everything. I was not yet traveling with intent to write about it either, and most of my photos were with friends instead of the city itself. Then my camera broke.

As a joke, I started making goofy little sketches on napkins about all the things that happened around me. I never thought that I would be using these drawings to look back and reminisce.

It began with funny notes on bar tabs and leaving them in random places. My friends and I had an ongoing speculation about the lives of pigeons and squirrels in Wicker Park which soon found its way into the sketches too.

Perhaps you will recognize some of these places or have found yourself in similar predicaments?