At the suggestion of several friends I visited Historic Rugby, Tennessee to find out what is so special about the tiny village.

Rugby was dreamed up as a religious cooperative Utopia in 1880 for England’s wealthy, idle younger sons who pitifully did not inherit the fortunes of their elder brothers and were too proud to suffer the workforce. (eye roll)

English author Thomas Hughes was wealthy and famous for his best-selling Tom Brown books. He wanted to provide educated individuals from rich families the dignity of becoming merchants and landowners in a town of their own where the populace depended on them, instead of them having to travel from town to town to earn a living. 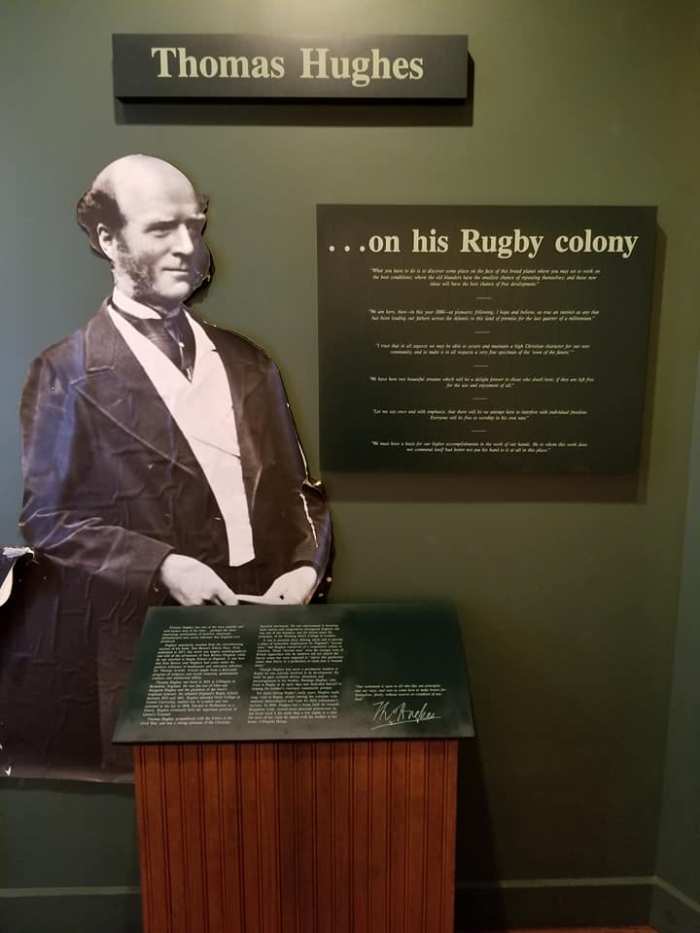 My pick for this entry is British band Morrissey’s “The Last of the Famous International Playboy.” Long before Steven Patrick Morrissey’s recent misguided commentary on other peopl… you know what, that is pretty much what he is famous for, so I guess the whiny martyrdom and pompousness of his music just seemed appropriate for this story.

Perhaps Hughes’ intentions were more innocuous than they first struck. As I learned more about Historic Rugby, the concept began to unravel and redeem itself as a community borne of good intentions. After all, Rugby suffered many disasters and major losses in a short period as it was developing, and it still stands when all odds were against it.

Skeptical, I continued on. 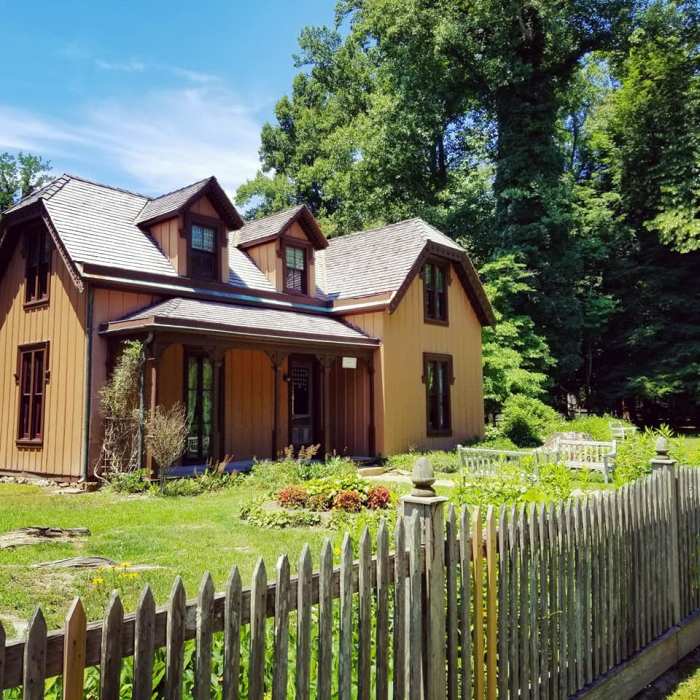 Kingstone Lisle
Land procured, Hughes’ first priority was to build for himself the most handsome home in the entire village, his Kingstone Lisle House. 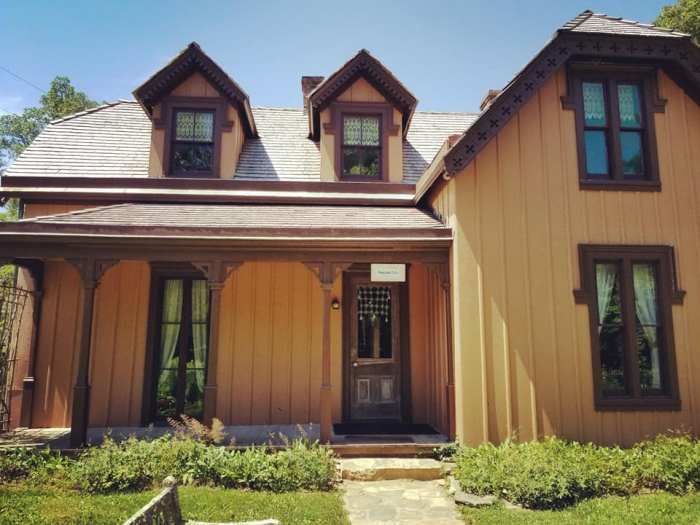 Situated at the entrance of the village, his home kept a watchful eye over the church and stood nearer to the library and school than any other. Sadly, Hughes was not able to spend much time in his own home to enjoy the fruits of his labour due to family matters back home in England. 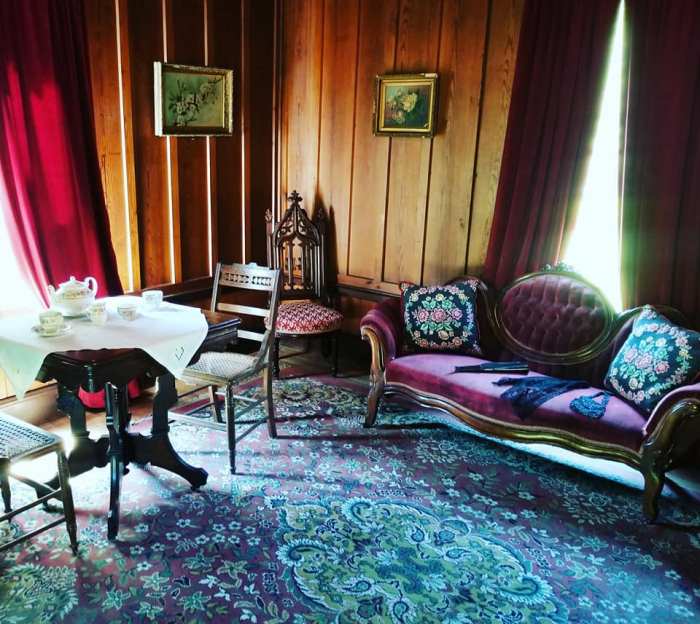 This gorgeous parlour has been well preserved to show the rustic elegance of Victorian style turned Southern. On the piano sits a collection of Scottish and British ballads that were popular in the late 1800s and beyond.

Hughes’ mother Margaret, brother, and niece all lived in the Uffington House just down the avenue. Mother, of course, had Royal status and authority over the village the instant she arrived at the ripe young age of 83. 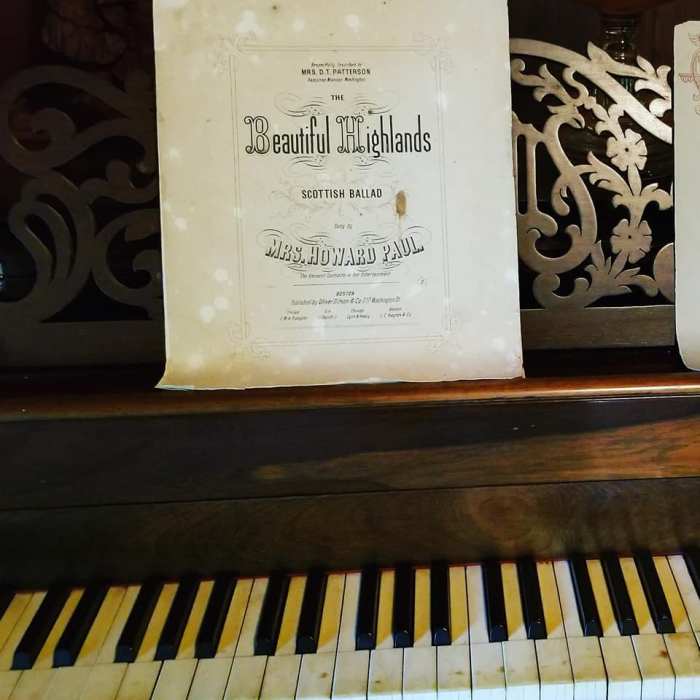 Next on his agenda appears to have been implementing religion and building a place of worship. Christ Church Episcopal is in the “Carpenter Gothic” style of architecture and was built with the finest local pine, walnut, and poplar wood. 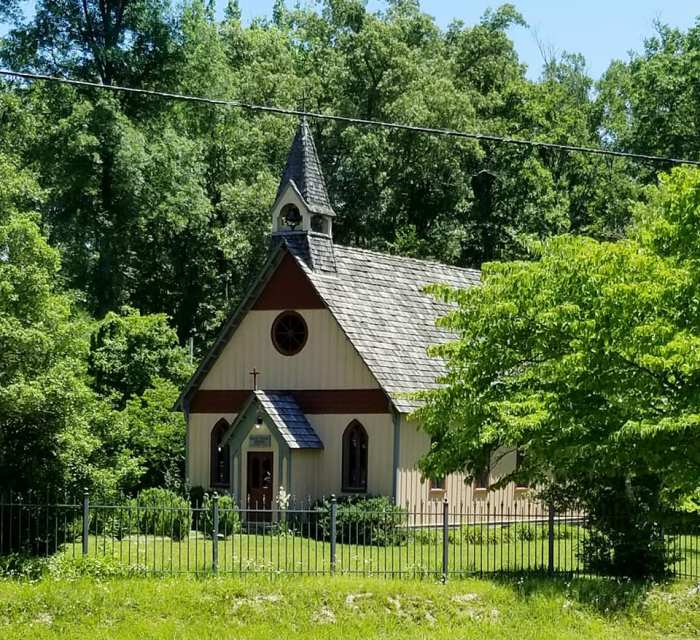 So, about “Carpenter Gothic” Architecture- think of Gingerbread houses, southern plantations, and Martha’s Vineyard. You can see some more specific examples here:
http://www.essential-architecture.com/STYLE/STY-Carpenter.htm 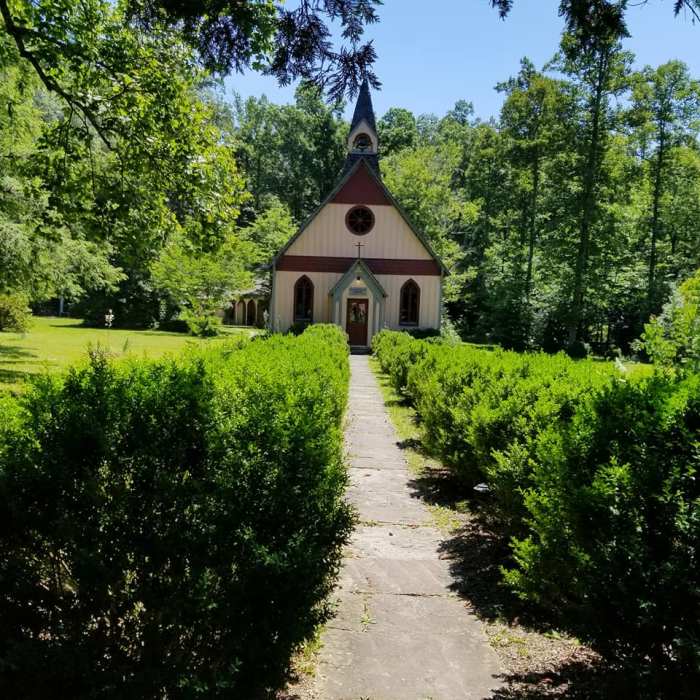 Christ Church and its gardens are adorable. Inside, it smells like lavender and sandalwood and feels very welcoming. Rugby residents still attend church here every Sunday and are often present on other days. 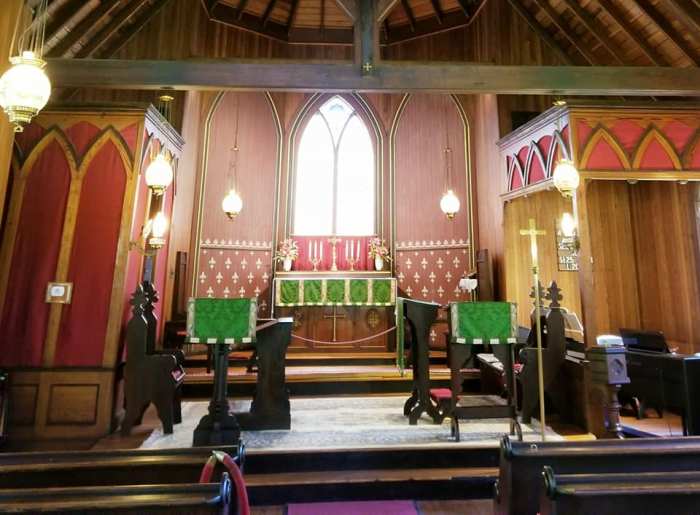 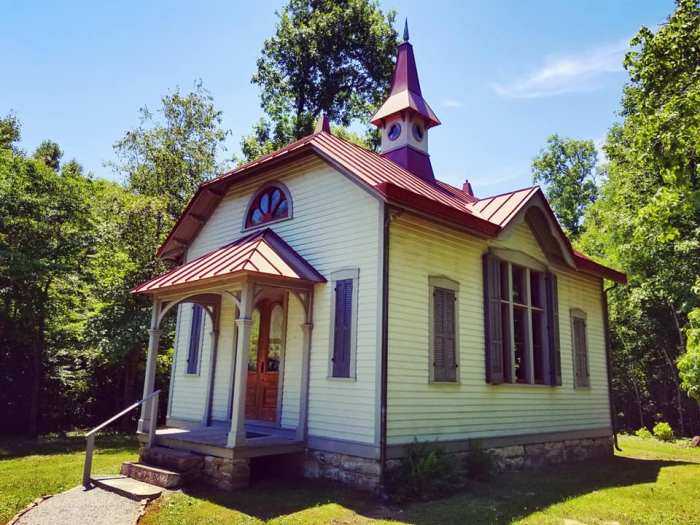 Over 7,000 items were donated by American authors and scholars to stock this beautiful library in celebration and support of the new village. To this day only a handful are missing, which is why the library no longer lends out. 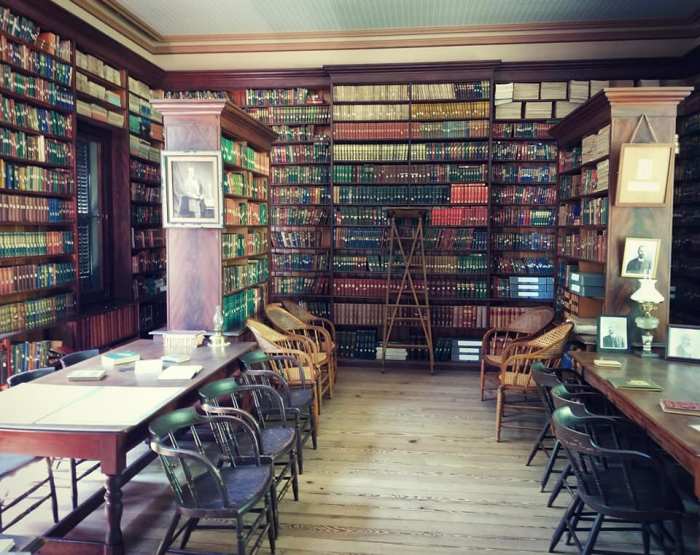 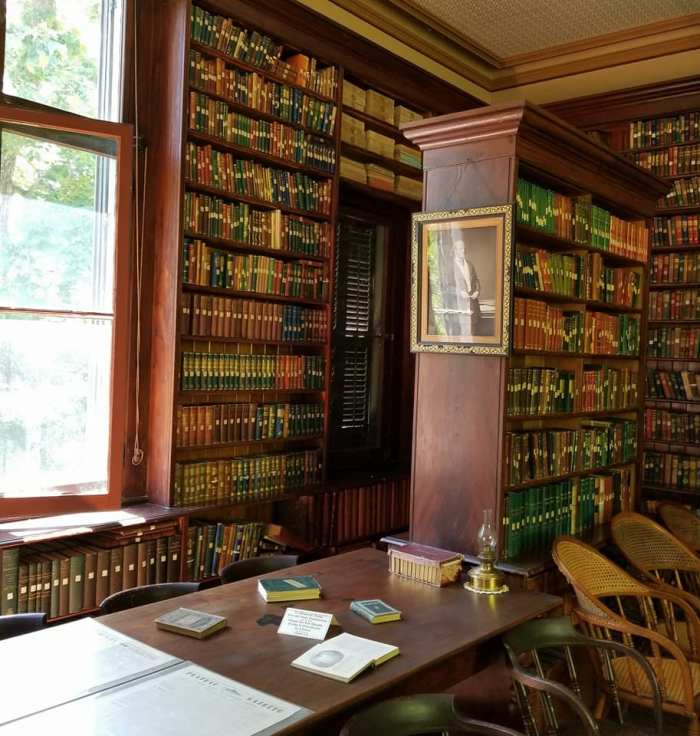 A large number of collections, classics, case studies, fiction works, and encyclopediae line the walls of the library.

Among many that caught my eye were Keys to Ghostism, How to Educate the Feelings, and an entire volume on Phrenology. It is always interesting to trace the beginnings of certain fields of study back to humble ideas. 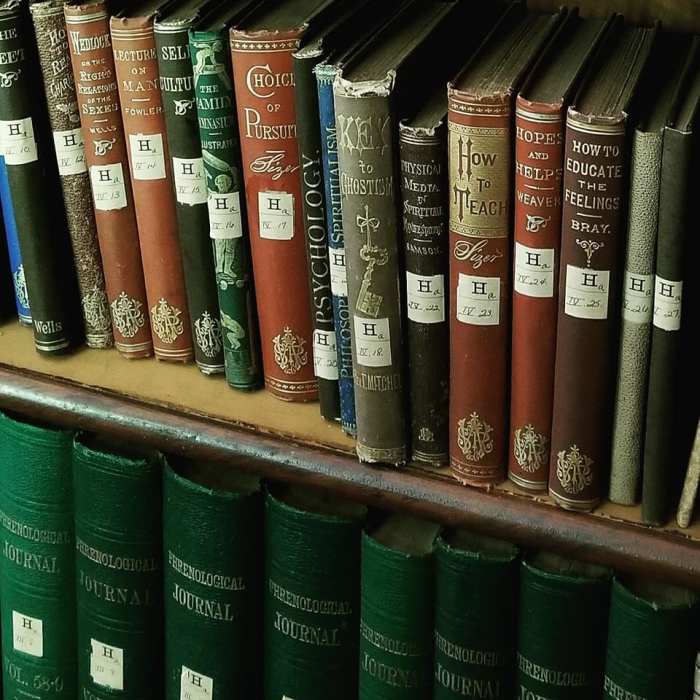 Schoolhouse Museum
In the early days of Rugby, nearly 70 Victorian buildings were constructed and over 300 colonists assembled. They were trained in agricultural practices and set out to sustain the village.

The three-story Schoolhouse Museum once served as the townhall, schoolhouse, and church from 1880 until a tragic fire in 1906. It was rebuilt within the year and classes resumed for another 45 years. In the 80s, the building was converted into a museum that tells about Rugby’s history. 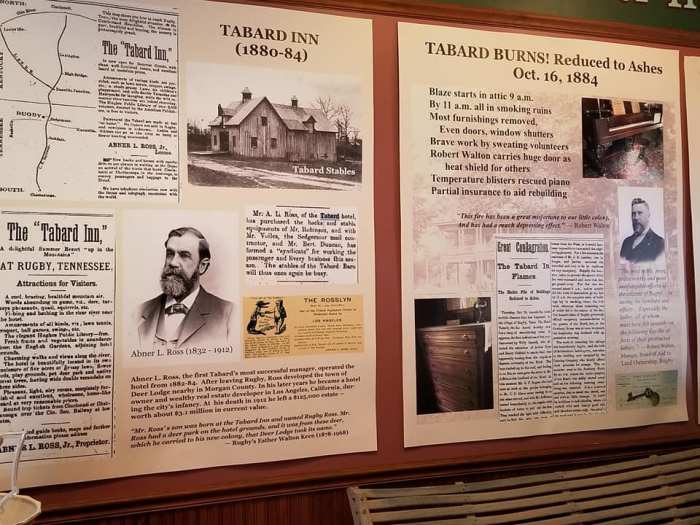 Hughes’ career and fame as an author, additional fires and disasters, typhoid breakouts, financial hardships, drought, and other hardships the community faced are detailed here along the walls and displays.

Tom Brown’s School Days
The gentleman who let me in advised me that Thomas Hughes’ famous books have been acknowledged as a primitive inspiration to the popular Harry Potter works as well as the entire genre of books, films, and shows about British Schoolboys in the battle of good against evil. 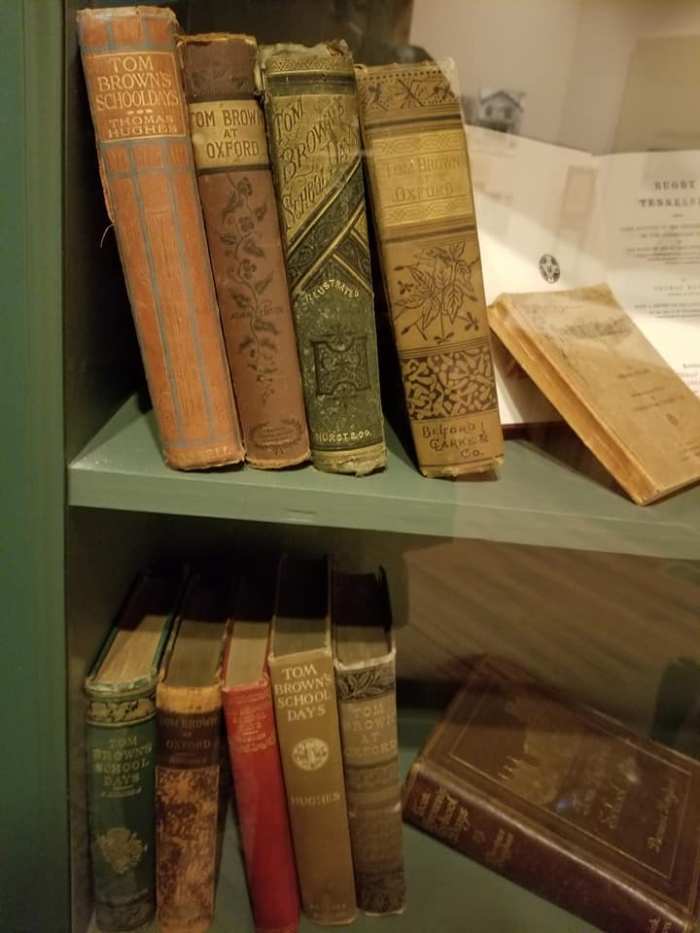 You can walk around the exterior of Kingstone Lisle, Christ Church, Thomas Hughes Library, and the Schoolhouse Museum independently. They are all within the space of an average block surrounding the Visitors Center, however they are usually kept locked.

For a few dollars, an agent inside the Visitors Center will pry open the heavy doors, draw back the blinds and curtains, and tell you about the history of each place.

Or just leave you in peace. 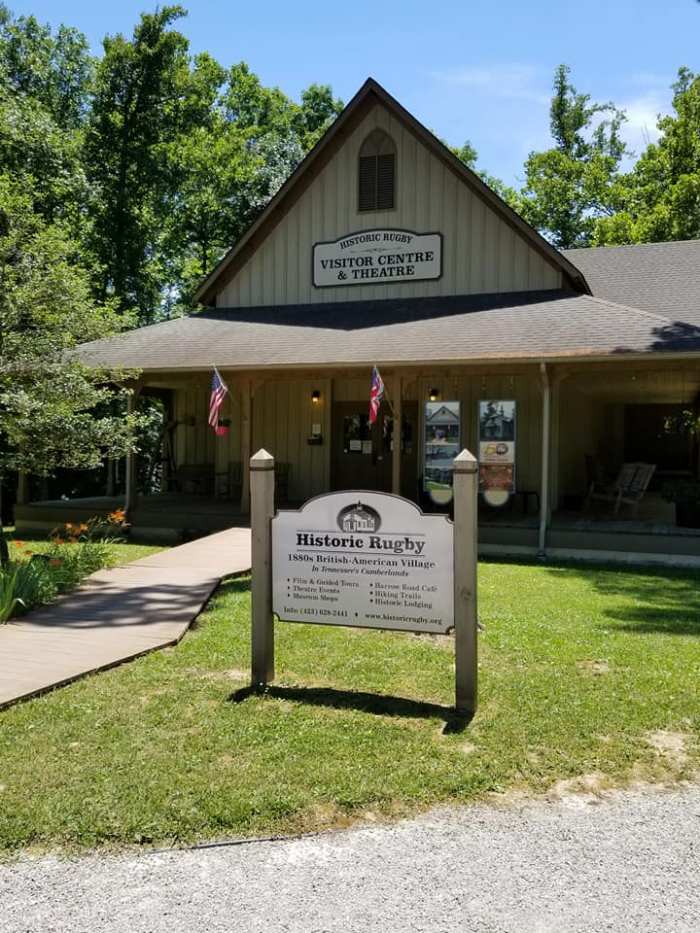 The kind server brought me a pitcher of water and two bite-sized “spoon biscuits.” She said the dough is made of butter and secrets that give the biscuits a creamy, cheesy, garlic taste. 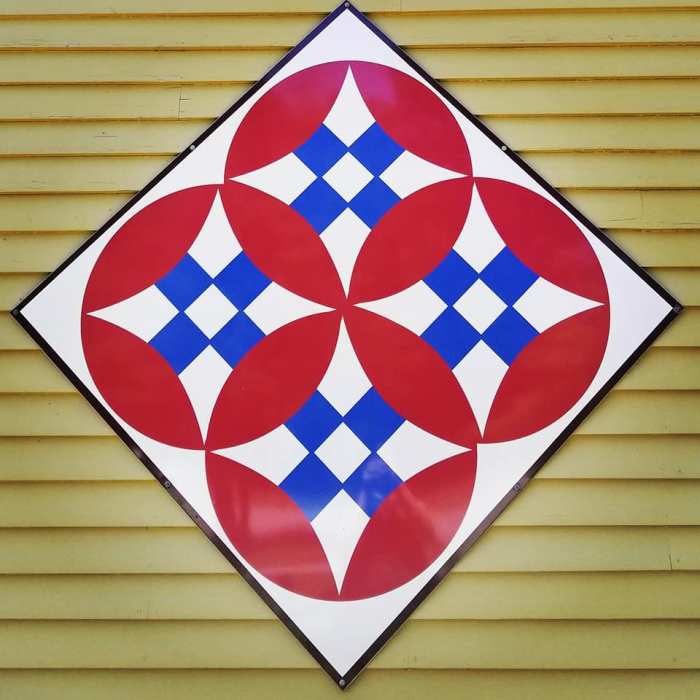 I ordered the Coronation chicken salad croissant with curry, raisins, onions, and celery with a fruit cup. By Coronation they mean of Queen Elizabeth in 1953, mind you.

The lunch menu flashed other British favourites such as Shepherd’s Pie, Fish and Chips, soups, salads, and sandwiches such as pimiento cheese, turkey with cranberry cream cheese, and the standby PB&J, BLT, and the Uffington Club. 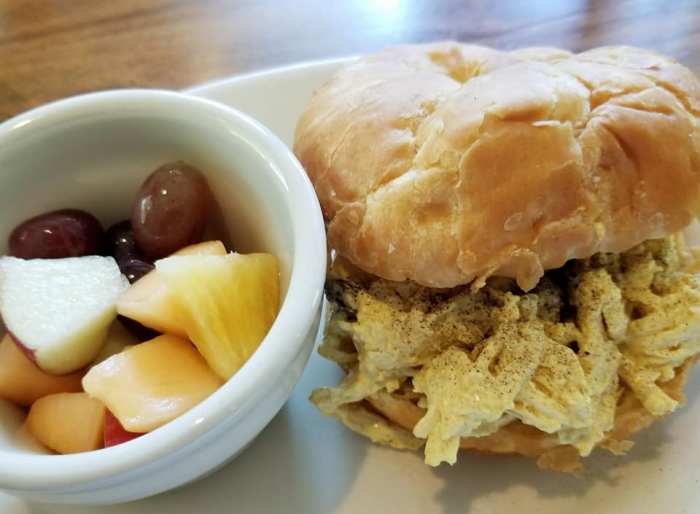 To Market, to Market
Continuing down Central Avenue, you will find Rugby Printworks, lodging cottages, and a brief cluster of local artisan and antique stores. 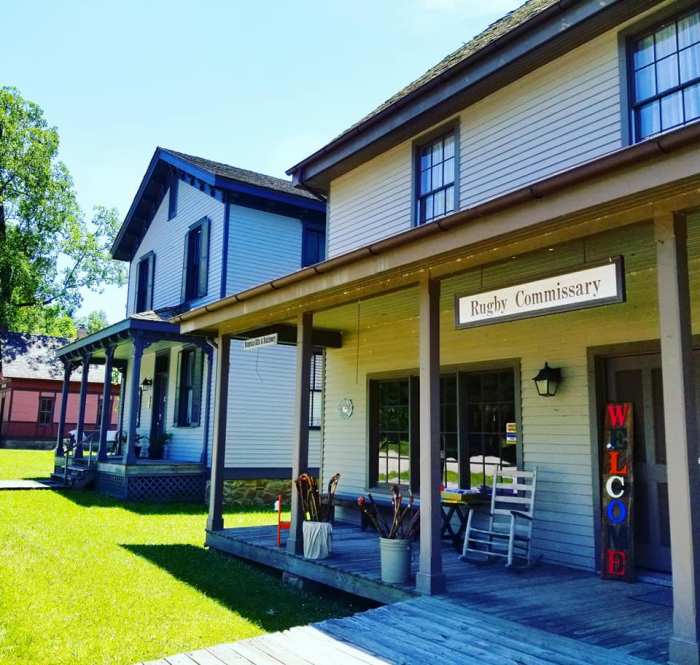 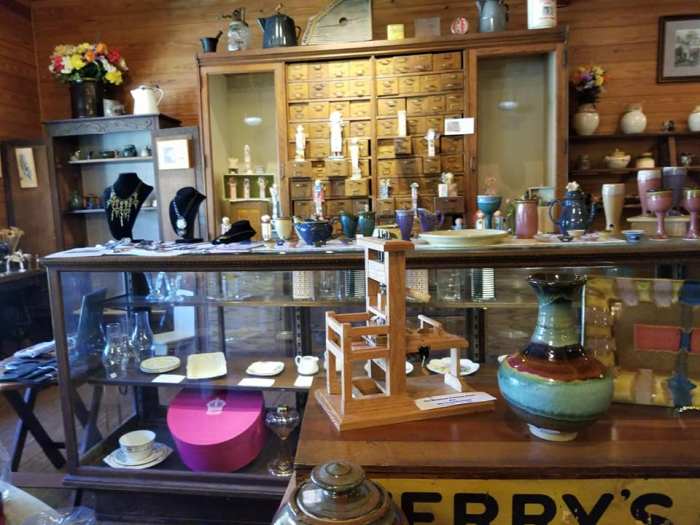 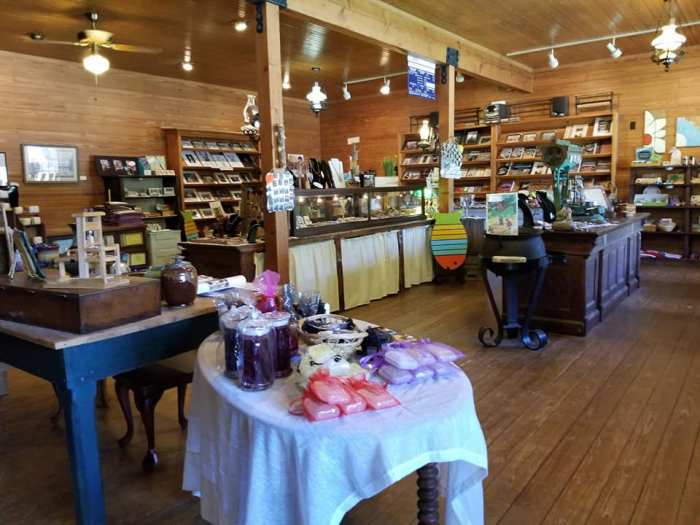 At Davenport Gallery I met the artist Ms. Davenport herself and purchased a small print of her Christ Church Episcopal painting. She was full of energy and suggestions to check out at all the other businesses and what makes each one unique.

Spirit of Red Hill- Nature, Art & Oddiments
Here I found many treasures including a copper Lobster cake mold and a shiny gold hat pin. Upstairs, they accept lodgers and in the back of the shop they offer coffee, tea, cocoa, and water to those passing through. I enjoyed chatting with the owner/artist/proprietress for a bit and she gave me some pointers as well. 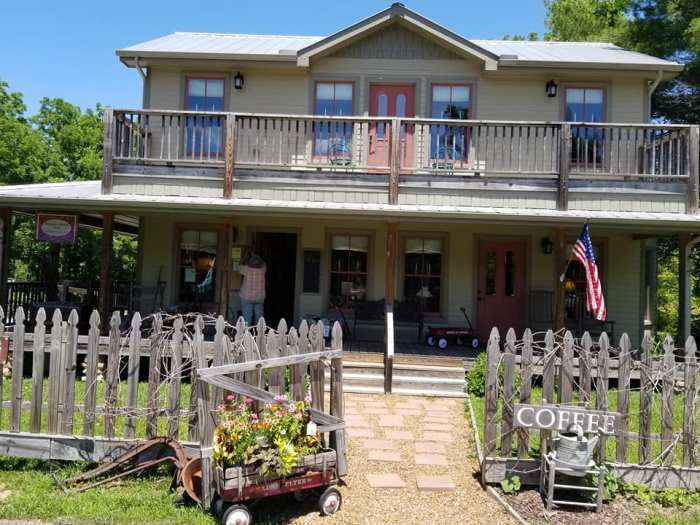 Laurel Dale Cemetery
Rugby’s Cemetery holds many of its former prominent members and extended family, and is accessible by a long gravel driveway. 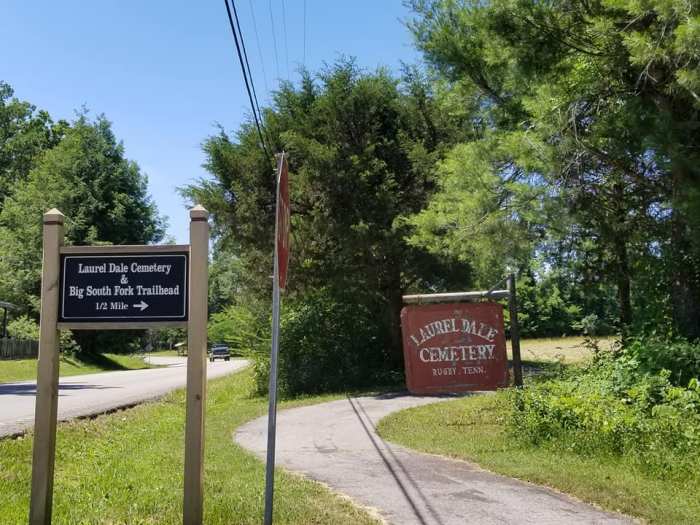 I maintained a slow speed of around 10 mph, mesmerized by all the shades of green and canopy of trees. 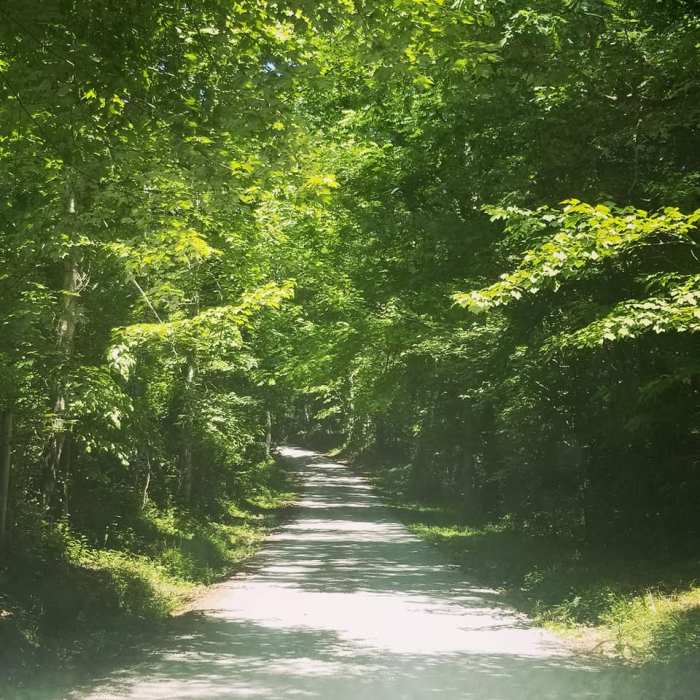 Beyond the cemetery lies the old Gentleman’s Swimming Hole, but I did not continue that far out. 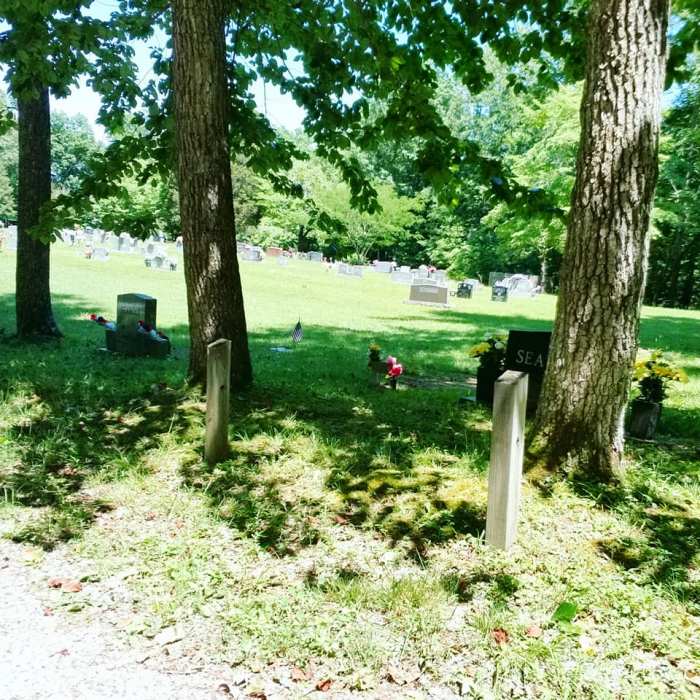 Most of the colonists/settlers who came to Rugby left in the early 1900s, but those who stayed behind and their descendants worked diligently to upkeep it.

Plans to salvage the buildings and revive the village simmered throughout the 60s and 70s, finally getting a kickstart from a man named Brian Stagg and the development of Rugby’s connection to the Big South Fork National River and Recreation Area. The never-ending work still continues, and there is more to come.

Renovated Homes
English ex-pat Sam Wilson’s Virgo House is one of a dozen or two houses that have been renovated, including Percy Cottage, Walton Court, Onderdonk House, Ingleside, Ruralia, Twin Oaks, The Lindens, and Wren’s Nest. A few can be seen walking the short distance from Visitors Center to the Spirit of Red Hill, but others require additional walking outside the main avenue and I suggest driving the far end. 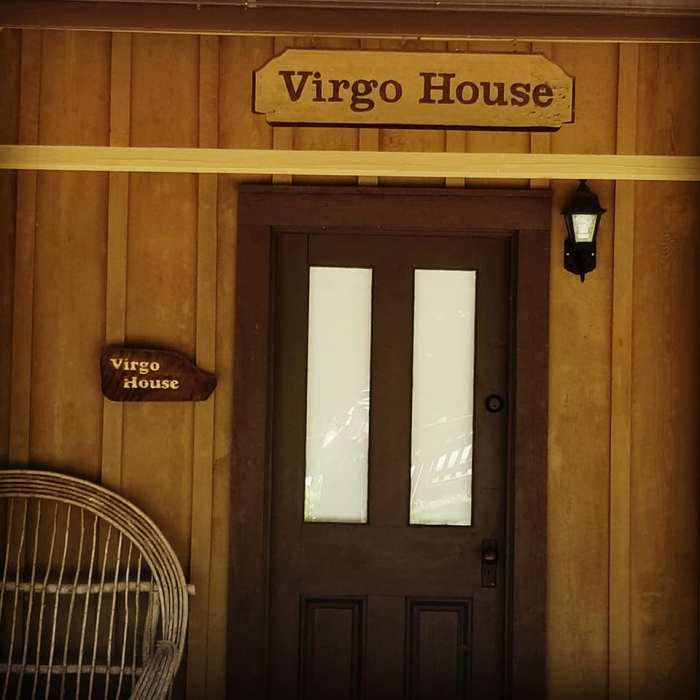 Be mindful of signs at the fence line that advise which buildings are private property and which you can creep around. You can also find plaques that tell stories and share hidden history along your way.

Massengale Homeplace Trailhead and the Rugby State Natural Area can be accessed by the gravel drive to the right of the Visitors Center leading behind it. 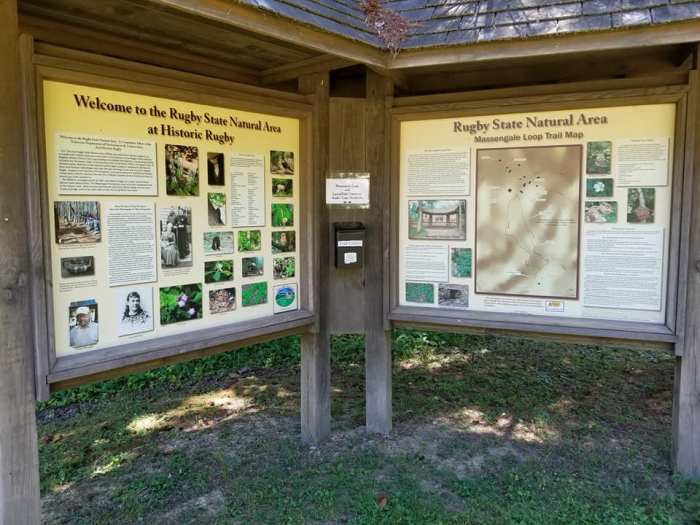 I found a little pond with some hidden treasures walking toward the Newbury House.

I spotted this cutie (get it?) and called for the fellow nature lover and owner of Spirit of Red Hill to admire it with me. 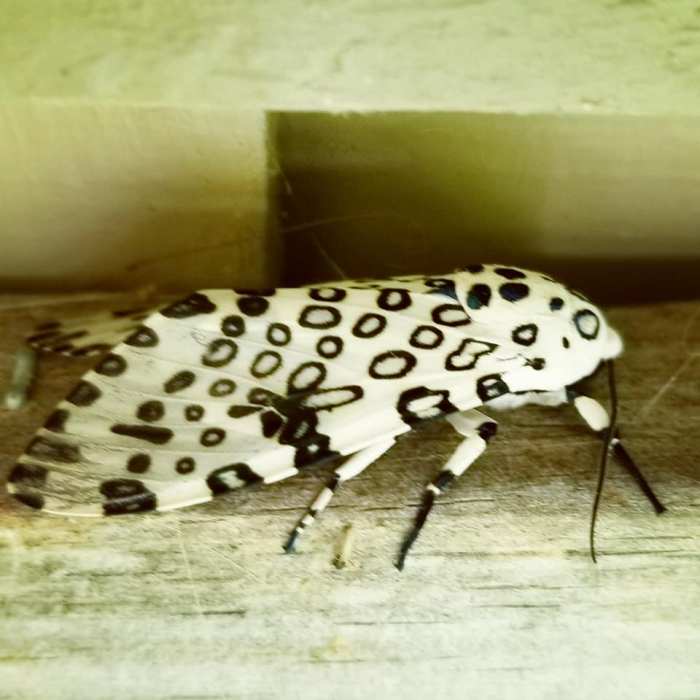 As I was leaving, I recalled reading something Hughes’ wrote before his death as one final wish for his beloved Rugby: “I can’t help feeling and believing that good seed was sown when Rugby was founded and someday the reapers, whoever they may be, will come along with joy bearing heavy sheaves with them.”

Initially I was not impressed by the backstory of Rugby but as my skepticism melted, I started to enjoy myself. Much respect to the resilient, devoted people who keep Rugby alive with all of its charm and simple pleasures in tact.

To learn more about Historic Rugby, TN check out the website:
http://www.historicrugby.org/