Between larger cities of Transylvania is Biertan, a little village with a serious church. Biertan is a Unesco World Heritage Site currently holding over 1,500 residents. The village was founded by Transylvanian Saxons in the early 1200s.

Biertan was a hub of merchants and religious activity for a few hundred years, and the popluation was well over 5,000 until Sighisoara started blossoming. Most Saxons left after WWII, and yet more after the Cold War ended. 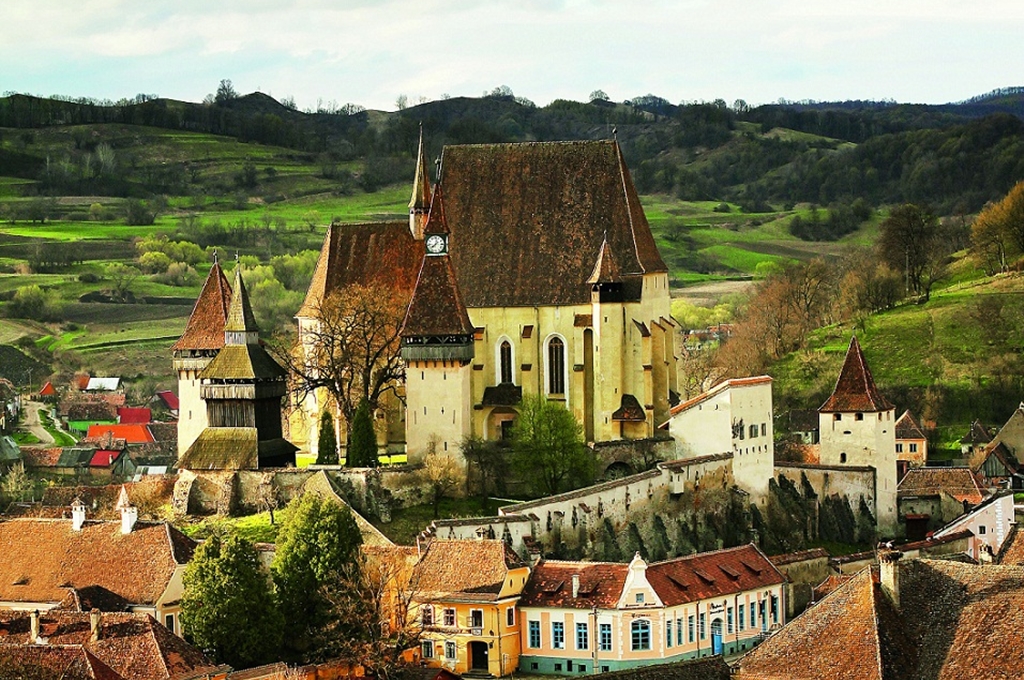 Rolling hills and vineyards of Sibiu County surround the village. Biertan wine was once popular around the region but now only a few continue to produce. People in Biertan still work their land with hand-driven machinery, travel by horse-drawn carts, and cross the worn cobblestones of the village market to sell their goods.

Biertan Fortified Church
Originally Roman Catholic, this fortified church was constructed in the early 1500s and became Lutheran after the Reformation.

In both Late Gothic and Renaissance styles, it has the largest altar of any church in Transylvania, and is the most structurally sound church here in its original form.

The organ has nearly 1,300 pipes that bellow and hum when played.

The original painted, carved pews and Bishop stools are still in tact on either side of a massive stone podium.

“I am the bread of life”

The View
The Fortified Church sits high above the Biertan village on a giant hill, in the center of a valley surrounded by mountains. This gives the appearance of having a moat and makes it much more formidable.

My friend enjoying the view

Fortified Walls
The church is protected by three layers of fortified walls; the innermost which contains Romanesque walkways that lure you around each turn through sculpted archways and trellises.

Overhead the walls are covered in artisan tiles and multiple species of ivy creep in out of all the dark spaces.

Towers and Other Features
Massive stone carvings commemorate the former Bishops of the church and line the walls of an inner chamber.

Marriage Prison Tower
There is a legend that when a married couple petitioned for divorce, they were forced to spend weeks locked inside the prison chambers. Together they shared one, just one, of what little items they were given. One bed, one spoon, one chair, one pillow, one blanket, and so on. The tower now has a small set up with mannequins to drive the point home.

I am not sure if it was intended more to emphasize that in the eyes of the law they are considered one, and so it should continue to be, or if it was to remind them how dependent on each other they are in this world. Maybe it was for something else entirely.. Either way, it is said that only one couple actually went through with the divorce over a span of a few centuries.

The Locksmith
A genius locksmith designed was recruited to secure the connecting walls of the village and church as it was being built. With one turn of the key, the gears and inner workings of a 19-point locking system in locks such as the Sacristy Lock below are set in motion, making it impossible to penetrate.

Biertan is not difficult to reach. We hired a car from Sighisoara, and the drive was around 25 minutes. Walk along the cobblestone path, climb the stairs past the museum and book/souvenir shop, and up you go. Here is an official link with video and photos.

We spent about two hours in Biertan before returning to Sighisoara.

Bonus!
Check out the booming echo of a hammer from a nearby villager at work: