Entrance to the cave from the lobby

Take an hour’s drive from Knoxville to Sweetwater, TN and you can find yourself at the The Lost Sea Adventure. The site is part of the historic Craighead Caverns and is America’s largest underground lake.

My song for this entry is “Swing Tree” by Discovery because the chorus is about being at sea.

The Lost Sea has earned further national (and international) attention with its membership of both the National Cave Association and the Southern Highlands Attractions, putting it closer to the top of the US Travel list.

Inside you can find all sorts of stalactites, stalagmites, and rare formations called anthodites, also known as cave flowers. Anthodites are spiky crystal-like blooms and are only found in a handful of other cave clusters in the world.

These anthodites also lend to the Lost Sea’s notoriety, making it a registered national landmark.

We waited in the lobby with others assigned to our tour group. When the time came, we made our way down into the chilly neon yellow tunnel and sat while the guide laid out a few ground rules.

As we entered the cave, the guide began sharing some history about the various rooms / segments of the cave and how it was inhabited in the past.

The oldest known activity inside the cave was pinpointed when the bones of a jaguar from the Pleistocene era, around 20,000 years ago were found. The bones were gifted to New York ‘s American Museum of Natural History and are still on display. 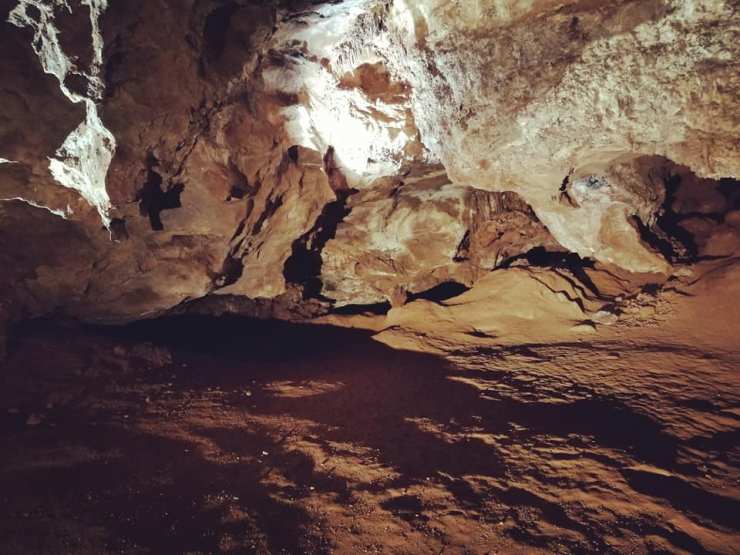 There is a huge arena-like room in the heart of this cave known as the Council Room where Cherokee Indians met for rituals, healing, socializing, and shelter. An assortment of arrowheads, pottery, and other relics have been unearthed here in the past.

At the start of he 1900s there was a young boy whose curiosity got the best of him after hearing rumours of a lake inside the cave. He crawled through the cracks and crevices of the cave until he discovered the Lost Sea itself. ***If this was actually discovered by the Cherokee beforehand, it was not mentioned. 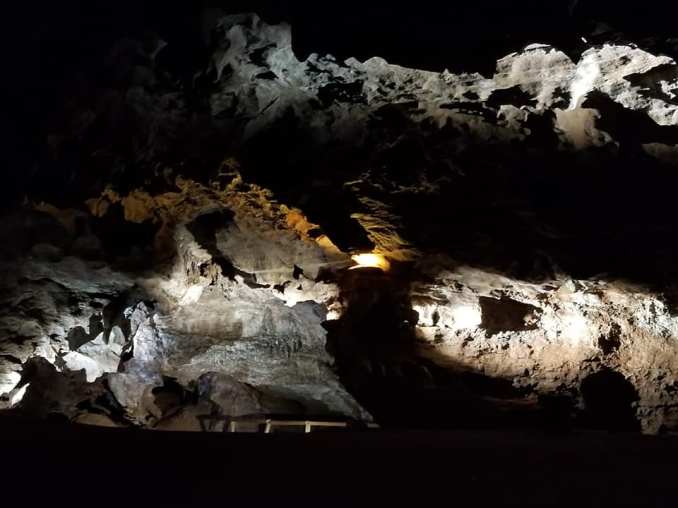 Fast forward a decade or so and the cave was opened to the public. For a brief time there was a dance club, and then there were moonshine stills, some of which you can still see. 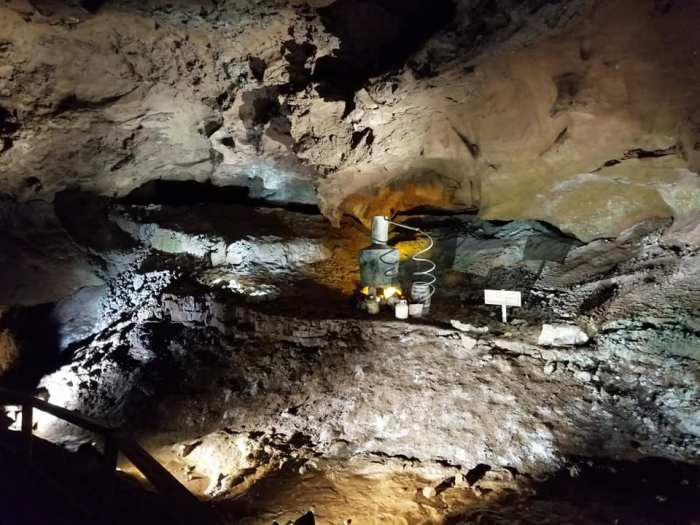 Confederate soldiers set up mines for saltpeter inside during the Civil War, and you can see some of the bins, carts, and tools left behind. A Union member once attempted to blow up the mines but was prevented (and shot) in the nick of time.

There were a few small children on the tour and I enjoyed seeing them dance with glee as they cast intriguing shadows on the cave walls.

However, while telling us about the short-lived dance club inside, our guide turned off the light and allowed a second of complete darkness. I would have enjoyed it greatly if those same kids had not began screaming at top volume and demanding that the light be returned. 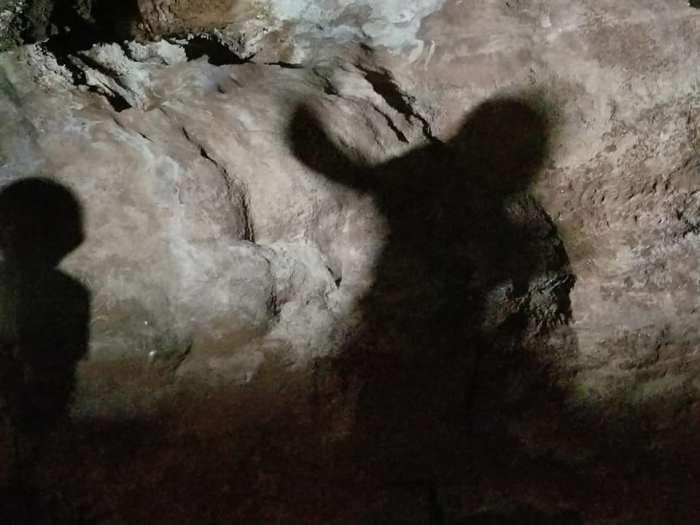 We wound through various elevation and incline levels, taking in the history and anticipating the boat ride.

Before we reached the dock, our guide gave us the option of chilling on a bench for about twenty minutes, or continuing down a steep slope to the boat. A few people stayed behind but my brother and I pressed on.

We boarded a rickety glass-bottom boat and slowly made our way across the lake in the dark.

There was some illumination from the dock and the guide’s flashlight; just enough to see the massive rainbow trout that thrive in the Lost Sea. Sadly they are all blind from lack of light, which is not uncommon for many fish species. They are well-fed and cared for, and look pretty below the surface.

The water level was almost to the top of the boat so be prepared to possibly get wet, maybe bring a zip lock bag for your phone. Outside of the main “room” where the ride takes place are multiple, larger, inaccessible rooms. At least 18 acres of water have been discovered to date but no one has been able to reach the full extent of it.

Hopefully more discoveries will be made in the coming years.

Inside the cave was just as one might expect. Well, anyone with common sense. A few people walked out of the tour early after loudly complaining nonstop for the first  15 minutes because it was “too dark” and “smelled musty.”

It WAS dark and musty.  We were, as it happened, inside a cave.

Personally I am an earth sign so I enjoyed being surrounded by the cool cave walls and walking on compact dirt. It was a bit slippery, the footbridges were wobbly, and we lost our balance several times. Some parts are quite steep, and there were some dull moments because the guide talked a lot about herself and unrelated info.

The best part of guided tours is that you learn more than you probably ever would have on your own, but the cons… the list can be endless.

Wear some slip resistant shoes and a sweater if you can not abide 58 Fahrenheit. Bring a bottle of water and a flashlight, and have some patience. You will have a good time.

After you emerge from the darkness, be sure to check out the Lost Sea Village. 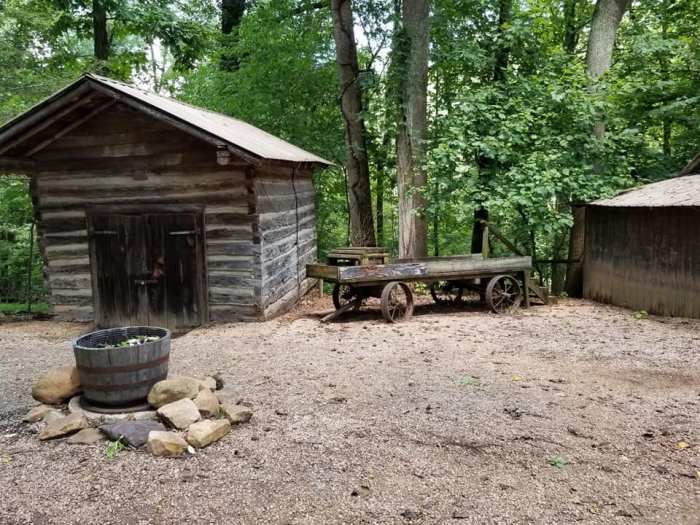 There are multiple shops, a mining troft, glassblowing workshop, a restaurant, and other attractions. 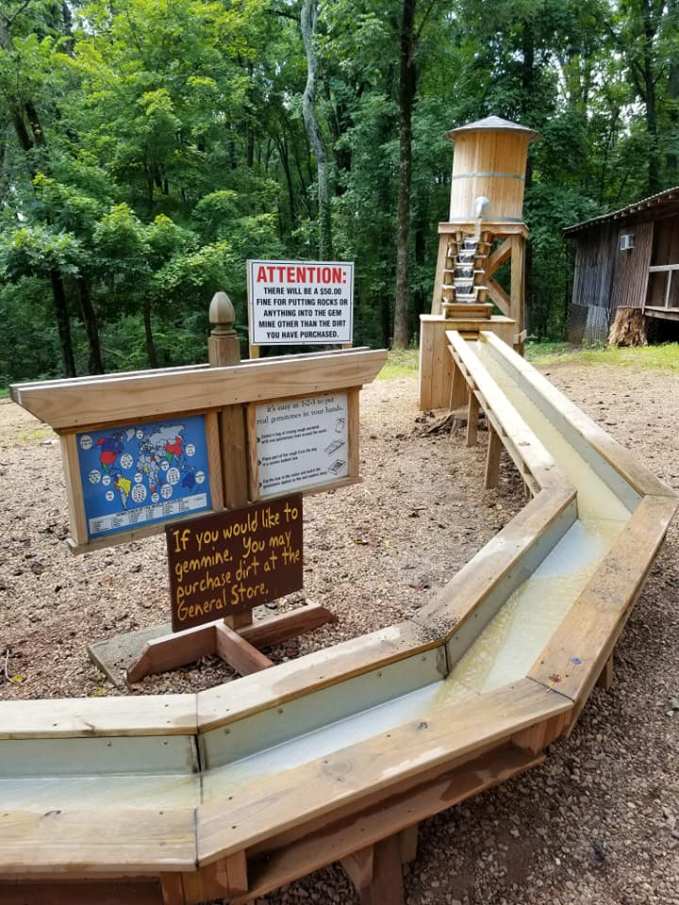 You can also walk a pleasant 1/3 mile nature trail that leads through cove-hardwood trees and various foliage.

The Lost Sea appears to be open daily except on major holidays but always check their schedule or even pre-book if you like to be overly prepared like me. You can not enter the cave without a guide, but they do have special tours and excursions if you are looking for something more in-depth.

2 thoughts on “The Lost Sea”