George Gershwin composed his classic opera Porgy and Bess while staying on Folly Island Beach in the 1930s, and Glenn Miller performed live right on the Pier. People from all over the world have kicked up their feet in this small beach community for decades.

My brain turned into a recalcitrant montage of beach-themed 80s music videos during this trip, and my song for this entry is “Rio” by Duran Duran.

Folly Island has less than 19 square miles of territory, and nearly a third of that is water. The island was used as a strategic base to take over Fort Sumter and fire the first shots of the Civil War, and later found to be an archaeological excavation site of a great Civil War mystery.

Locals call this barrier island “the Edge of America” after two surf shop owners turned the nickname into a trademarked slogan in the 1990s.

Older residents still endearingly call it Mayberry by the Sea, and in Civil War times it was known as Coffin Island.

Some friends of mine fell in love with Folly many years ago, and hearing them speak about it inspired me to make this a must-see location during our trip. It was convenient too, only 15 minutes from where we were staying in Charleston. 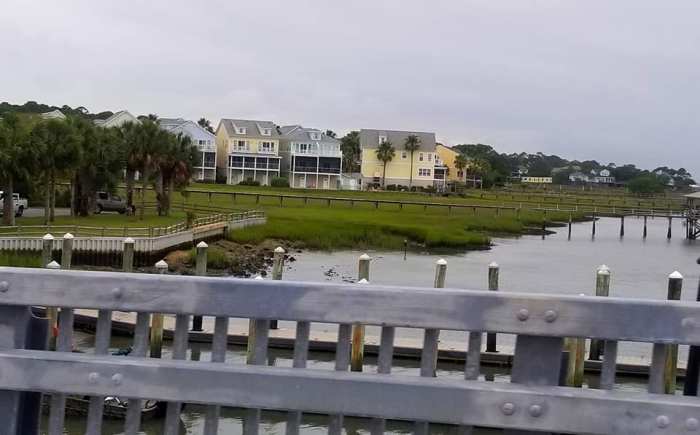 The drive in was full of ships, wide open skies, and pastel beach homes on stilts. Once we arrived, our first stop was the Folly Beach Fishing Pier.

We found parking right near the entrance of the pier for an easy $10. The helpful attendant voluntarily gave us a quick rundown of the top places to check out. 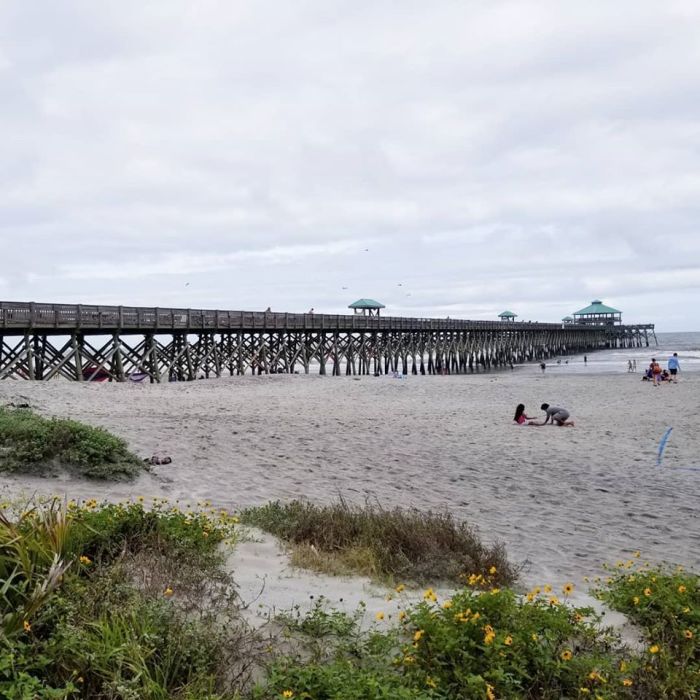 We opted for beach time instead, after noticing most of the places were crowded. We were still in the time of COVID-19 and social distancing after all. 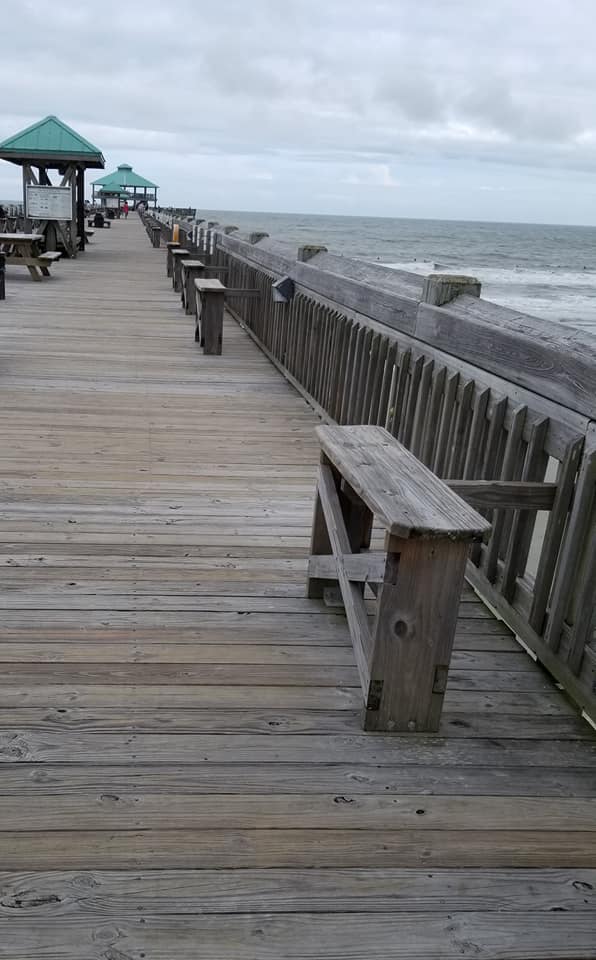 At the edge there was nothing but water and sky, though I was told it is not uncommon to see dolphins, loggerhead turtles, and whales putting on a show.

A few people were fishing along the way, and the pier shop sells fishing gear/permits. There was also a bar, restaurant, surf shop, ice creamery, and some other places at the pier’s entrance.

It was a bit overcast when I took these photos, but the sun came out shortly afterward and absolutely BLAZED! 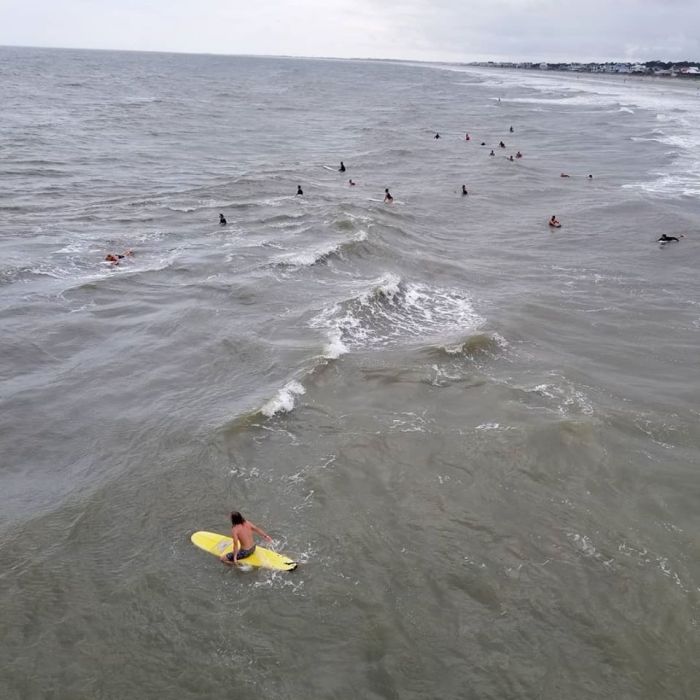 Outside of tanning, relaxing, surfing, fishing, and crabbing, you can find rental booths for paddle boards, kayaks, and other activities. 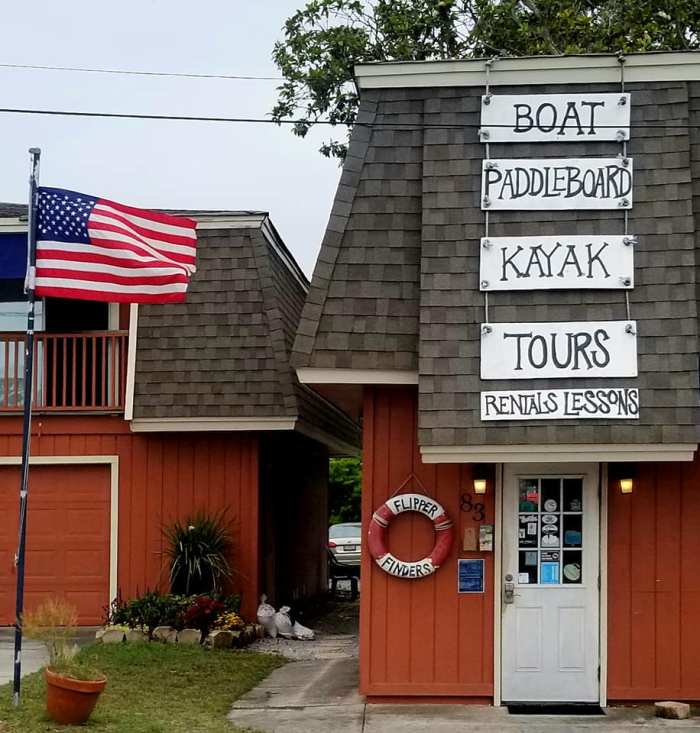 Center Street is the main thoroughfare with the most shops, restaurants and bars. As you cross the Folly River southbound on Folly Beach Road, it turns into Center Street and leads you right to the pier. 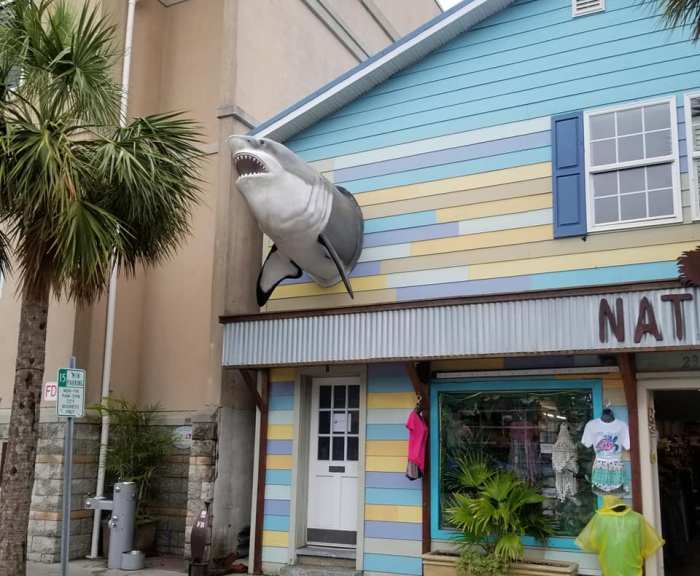 Intersecting Arctic, Ashley, Cooper, and Erie Avenues are all full of life as well.  This was our view from the St. James Gate Irish Pub on Ashley Avenue: 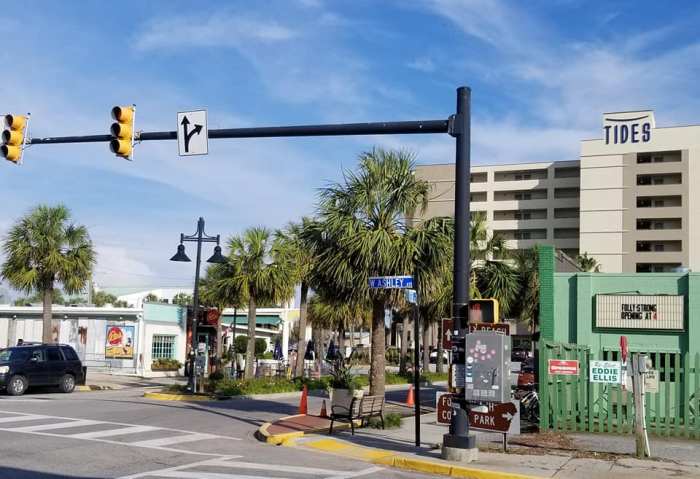 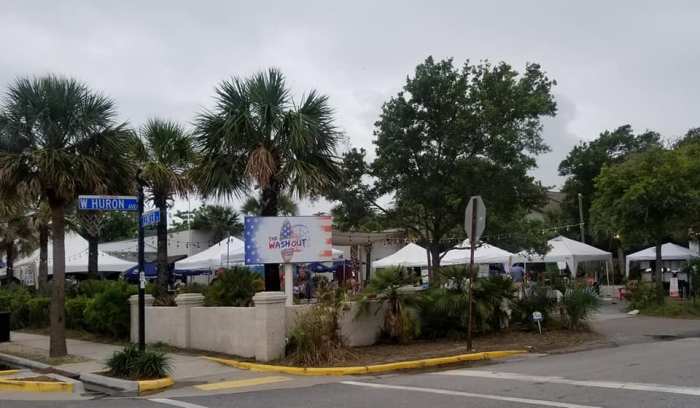 When social distancing is no longer a concern, I would love to return and visit many of those places since Folly is known for its top quality seafood and local cuisine.

I also wanted to visit the Morris Island Lighthouse and Aiken Rhett House while we were here but both were closed for tours due to COVID-19 precautions.

With the luck of the Irish, we found the almost-empty St. James Gate pub to be an oasis away from crowds. They had swung open the doors and windows, allowing the cool breeze and ocean sounds in.

My friend noticed a sign for their award-winning Frozen Irish cocktail as we passed. No discussion was necessary, we scuffled inside immediately. 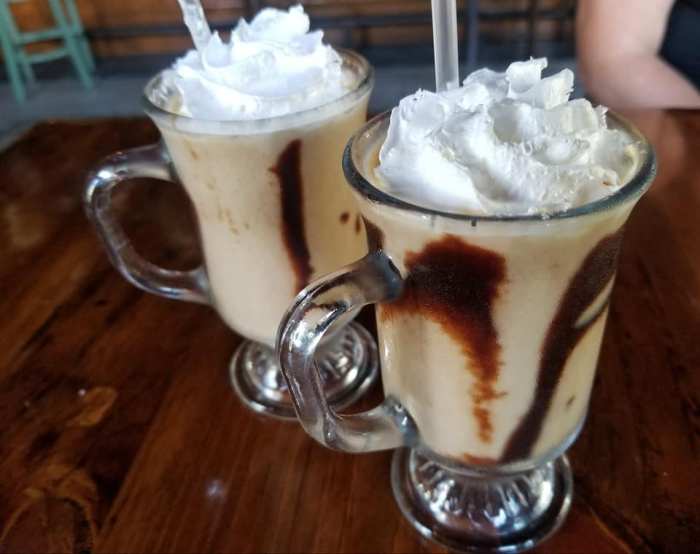 Our server was the most friendly and attentive stranger I interacted with this entire trip. It was a hard choice to pick just two appetizers off the menu but we settled on three mini corned beef sliders on pretzel buns and two crispy egg rolls filled with cheese, corned beef, potatoes, and cabbage. They came with a creamy horseradish sauce and everything was so delicious. 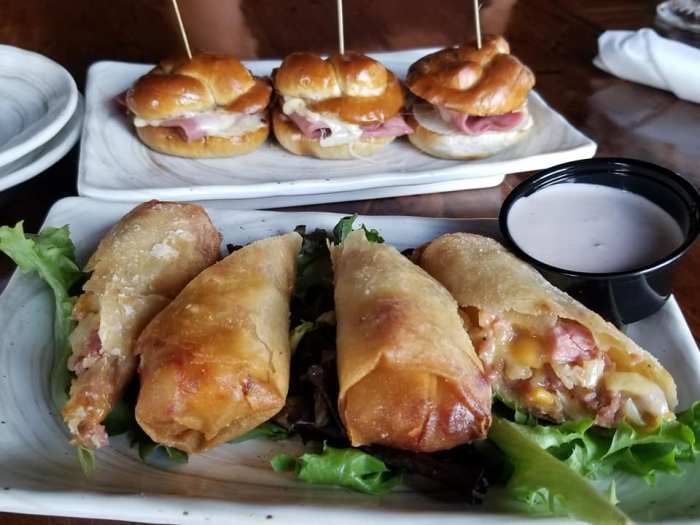 Our brief visit to Folly Beach did not serve it justice, but we saw right away how lovely and quaint it is. In the area for a while? Follow me to Charleston (in progress).

Bonus video: we ended up listening to Tame Impala quite a bit on this trip, so enjoy some more beach vibes. Don’t forget to subscribe and follow!

One thought on “Sea Gazing at the Edge of America”