Countless Overhill Cherokee towns are buried under water in East Tennessee. The history of this region and its native people is still full of mysteries and surprises even after decades of extensive archaeological projects.

The modern town of Vonore is a historically and culturally-rich, prominent archaeological site just a few miles south of Historic Loudon, Morganton, and Greenback.

Fascinating places like the Tellico Blockhouse, Fort Loudoun, the Fort Loudon State Historic Site & Park, the Sequoyah Birthplace Museum, the Tanasi and Chota Memorials, and the community of Toqua form a crescent around this part of the Little Tennessee River. 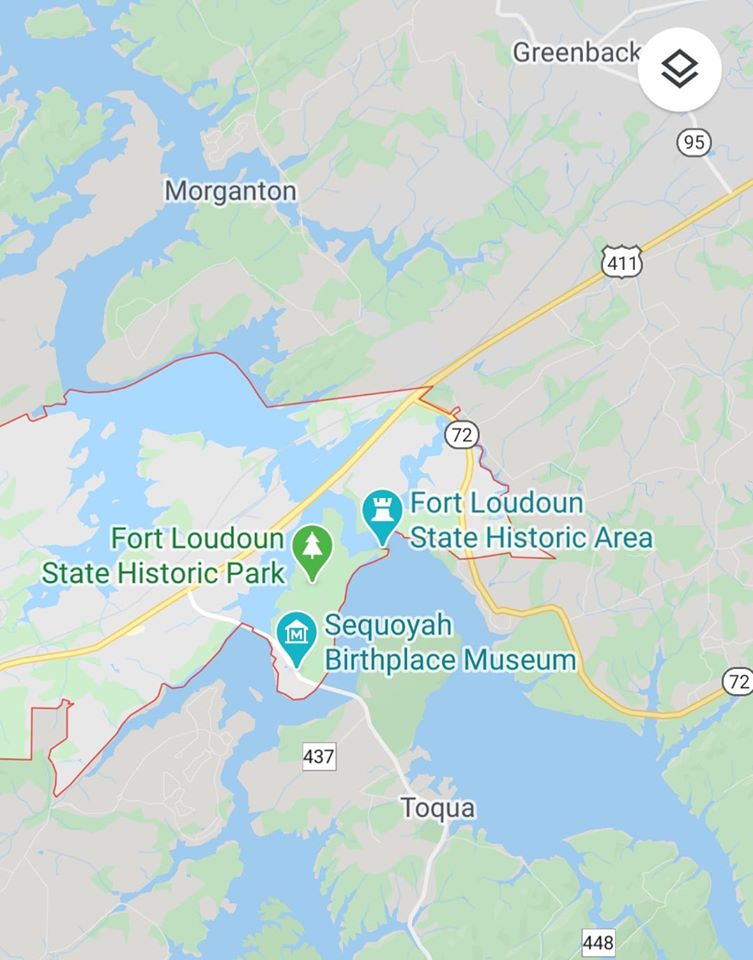 This territory in and south of Vonore covers what is now Monroe County, and was once a major settlement of the Cherokee Indians. Much of Vonore’s notoriety centers around the Seven Years War and the Cherokee Warriors’ efforts at Fort Loudoun.

My song for this entry is “Totem” by Tomahawk:

As most of my readers and friends know, I have always been extremely passionate about my paternal German ancestry. Lesser known is that my mother’s family is Irish and Cherokee, but I am not connected with that side and do not know much of its genealogy.

After a recent tour of Ireland, I have been feeling a strong pull to learn more about my Cherokee lineage as well. How fortunate I am to live so close to the source!

Rather than attempting to summarize or chronicle all of Cherokee history, this entry is simply about what I have found so far in the Vonore area. 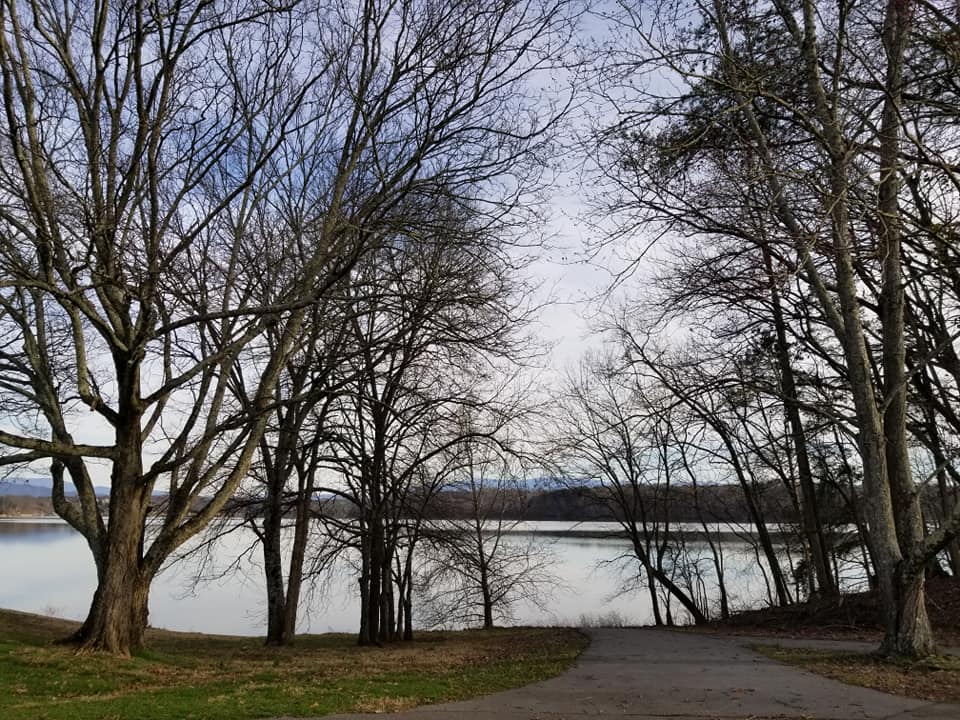 Fort Loudon State Historic Site & Park
Since 1965, Fort Loudoun has been a registered National Landmark. It was named after the fourth Earl of Loudoun, who was the commander of British forces in America at the time. Loudoun is also the namesake with a slightly varying spelling for the nearby historic City of Loudon.

When Europeans began invading and settling in North America, it was a race against time to claim one’s own territory. The British and French were particularly ambitious.

French soldiers in Canada and New England formed an alliance with the Shawnee Indians and began moving South. British soldiers on the East coast wanted to move West, and so the troops inevitably clashed.

During one such clash, the French troops were destroyed, but the British realized they must act quickly to form alliances with other Native Indian tribes in order to keep their footing. 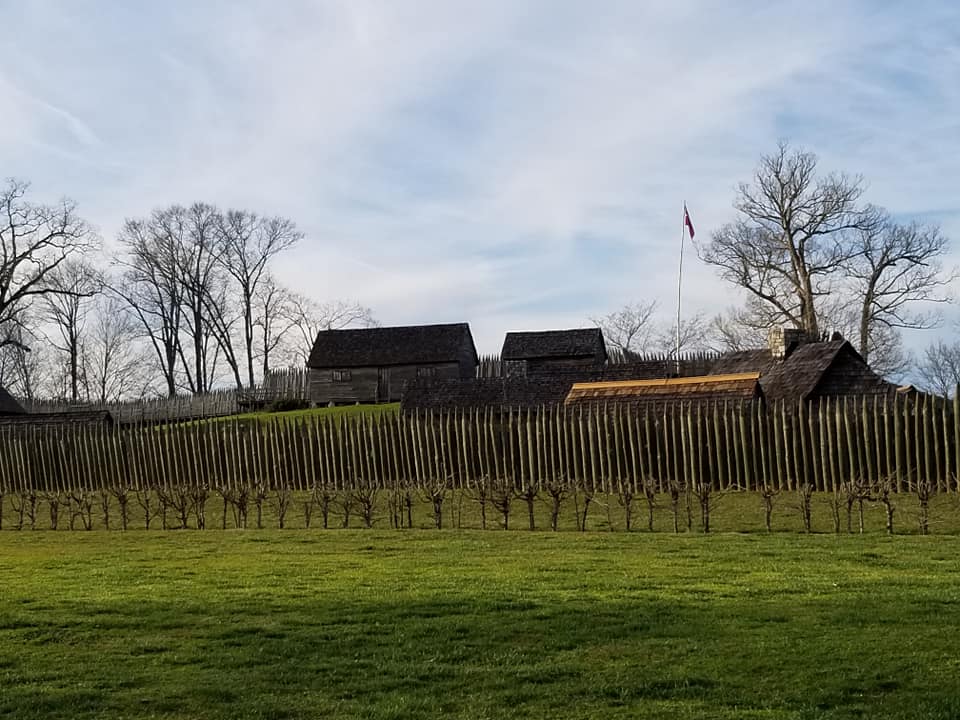 Fast forward to Cherokee land surrounding the Little Tennessee River. British troops arrived and somehow earned the trust/alliance of the Overhill Cherokee Indians, gaining Cherokee warriors and protection in exchange for some of the supplies they were moving through the Carolinas on the British trade route.

Originally Fort Loudoun was constructed in 1756 and served as a military garrison for less than five years. The Cherokee eventually realized they had been betrayed outside of the Fort, so they captured and burned it down.

Ruins were left untouched for the most part until the 1930s, when the Fort Loudoun Association was established, and in the late 1970s it became an official State Park of Tennessee. 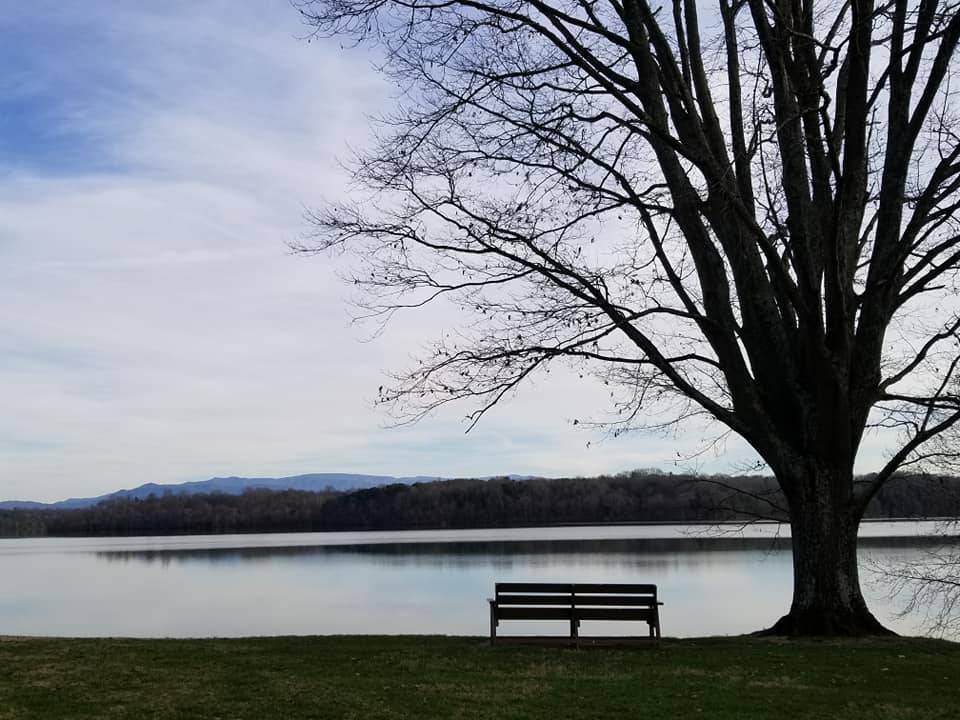 Today, the reconstructed fort and the ruins of the 1794 Tellico Blockhouse overlook a romantic and reflective landscape. Reenactments, trade fairs, and festivals take place in the park all throughout the year. 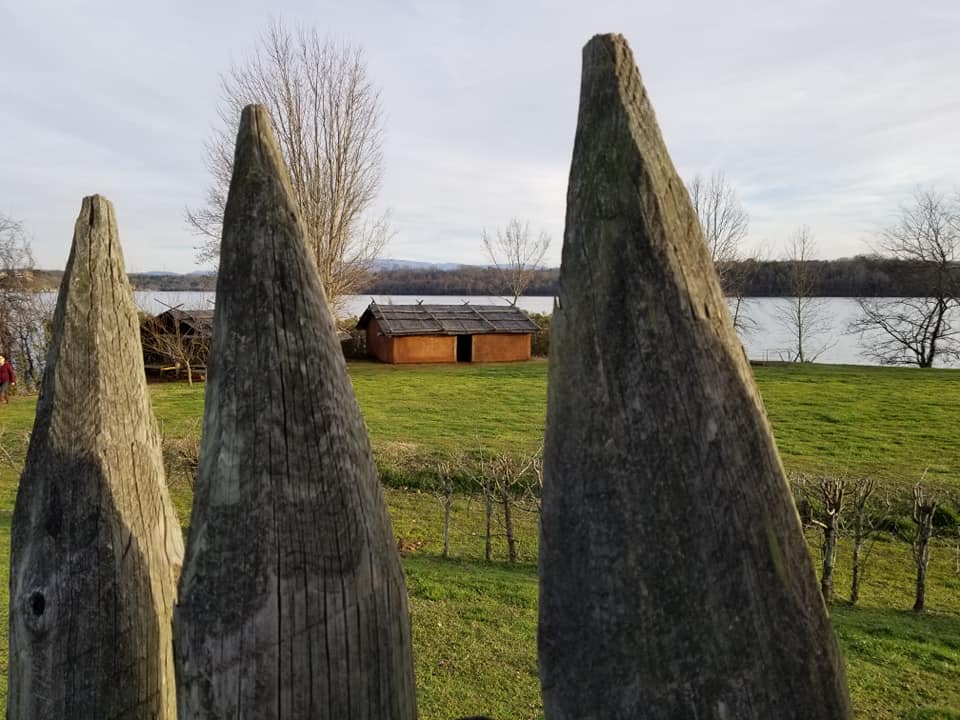 The reconstruction you see now is actually on ground that has been built up almost 18 feet high to prevent flooding, partially by nature but primarily as a result of the Tellico Reservoir Project. I will tell you more about that later. 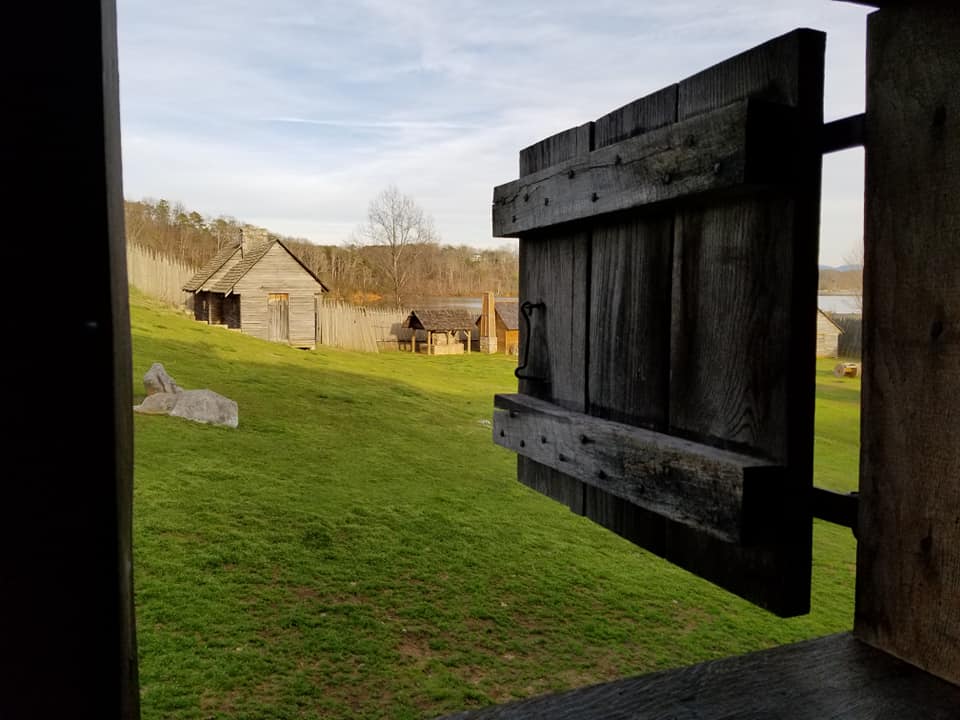 As you walk through park you will see the Fort in the distance, surround by high wooden spikes that form a protective barrier. Some of the man-made weapons like the chevaux de frise seen below, and natural defenses like the native Honey Locust trees with their giant thorns are still in tact and on display.

These protective walls have raised platforms for visibility and several canons in place to get a more detailed experience. 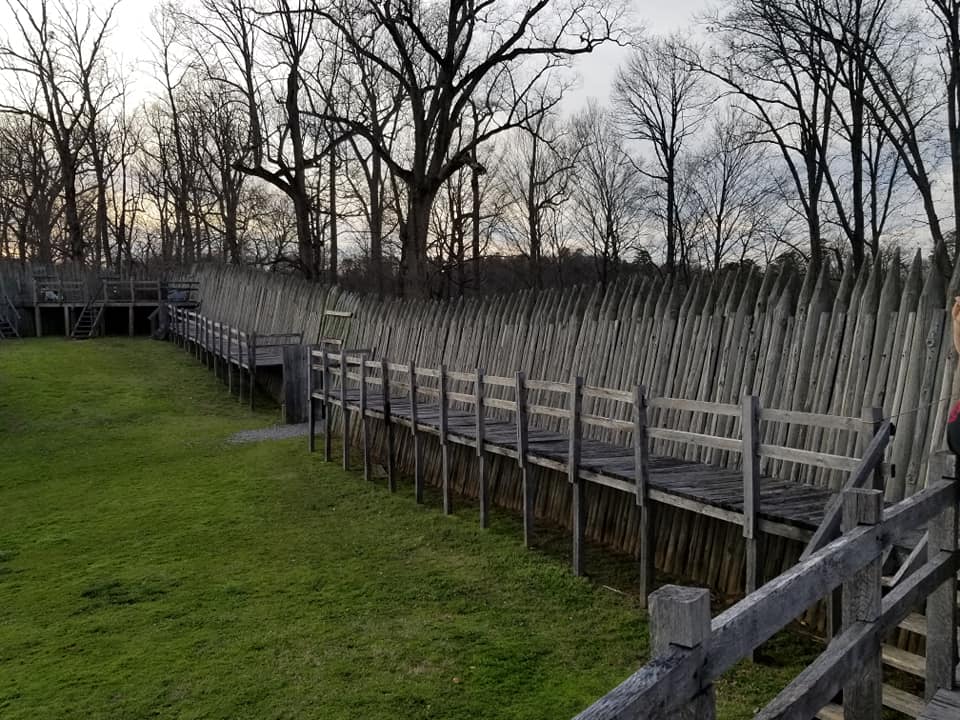 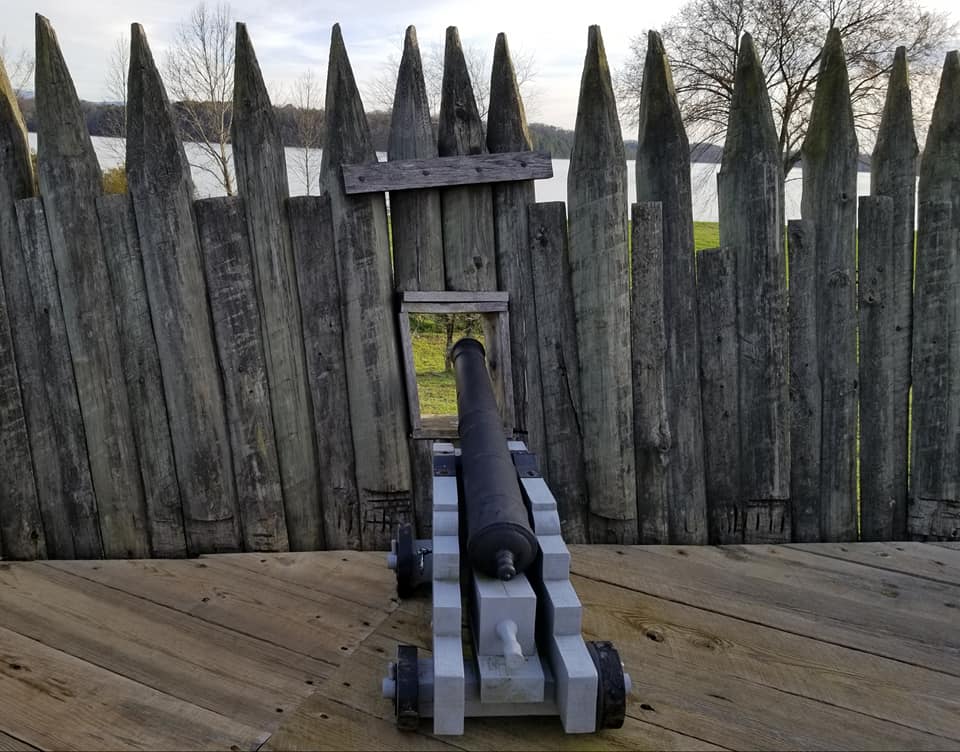 Inside the Fort you can take a tour of soldier barracks and community features like the stone oven, storehouse, machinery, tools, etc.

Vonore’s natural beauty and historical significance draws outdoor lovers and history buffs from all over the world.

Unlike Fort Loudon, this is not a replication, but it is bare bones. 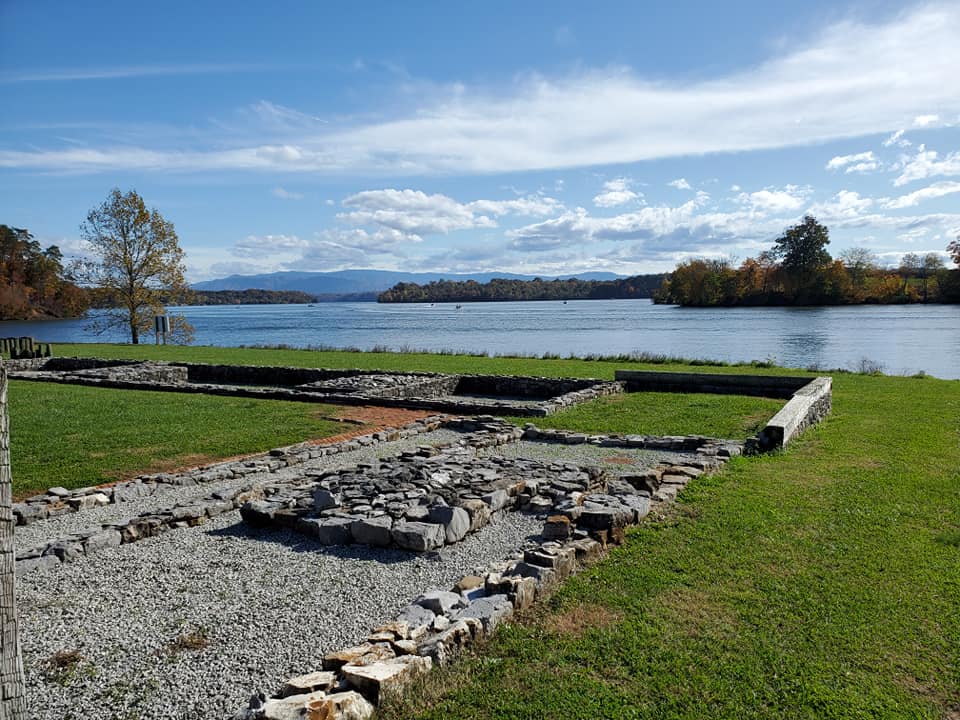 What remains here is from the actual fortified garrison that was built in 1794. 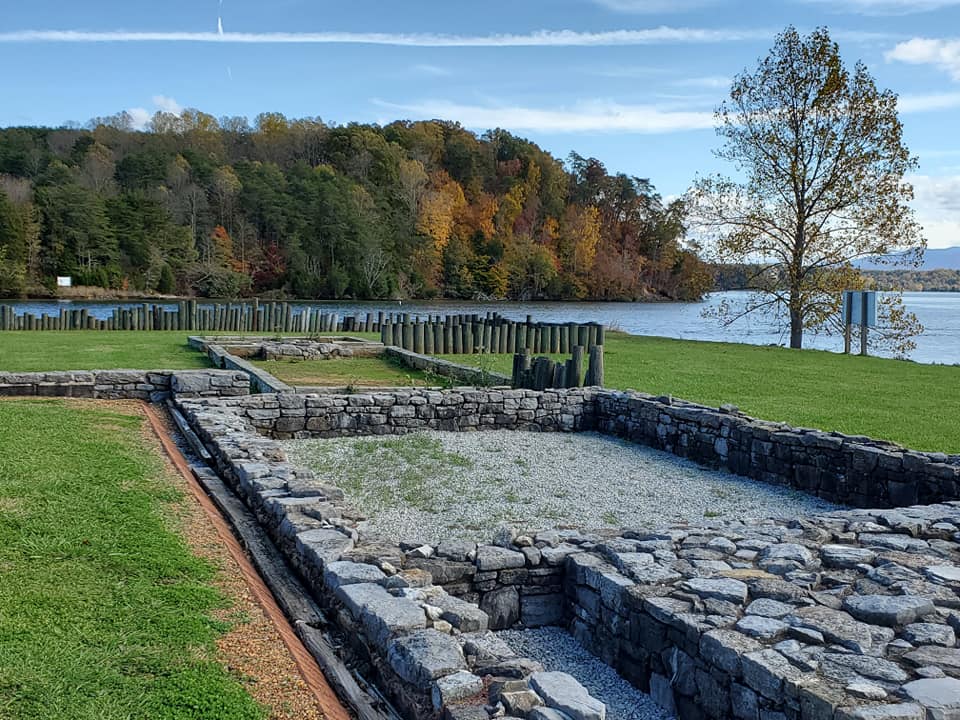 It was used for about 17 years to manage trade routes, monitor Cherokee residents, provide necessities for passage of European or white settlers and travelers, and other purposes.

The Blockhouse is often overlooked in favour of Fort Loudoun, unfortunately. I will even admit I had been to Fort Loudoun twice before visiting the Blockhouse, but now I want to go back often. . 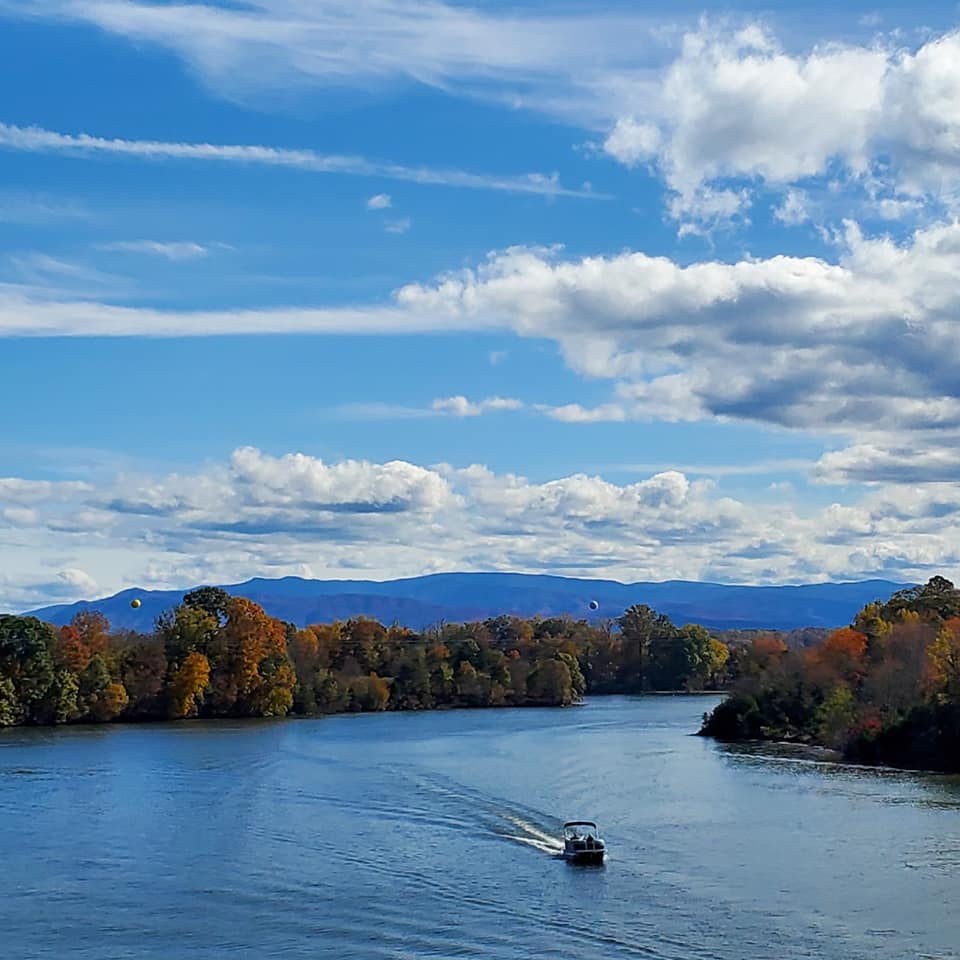 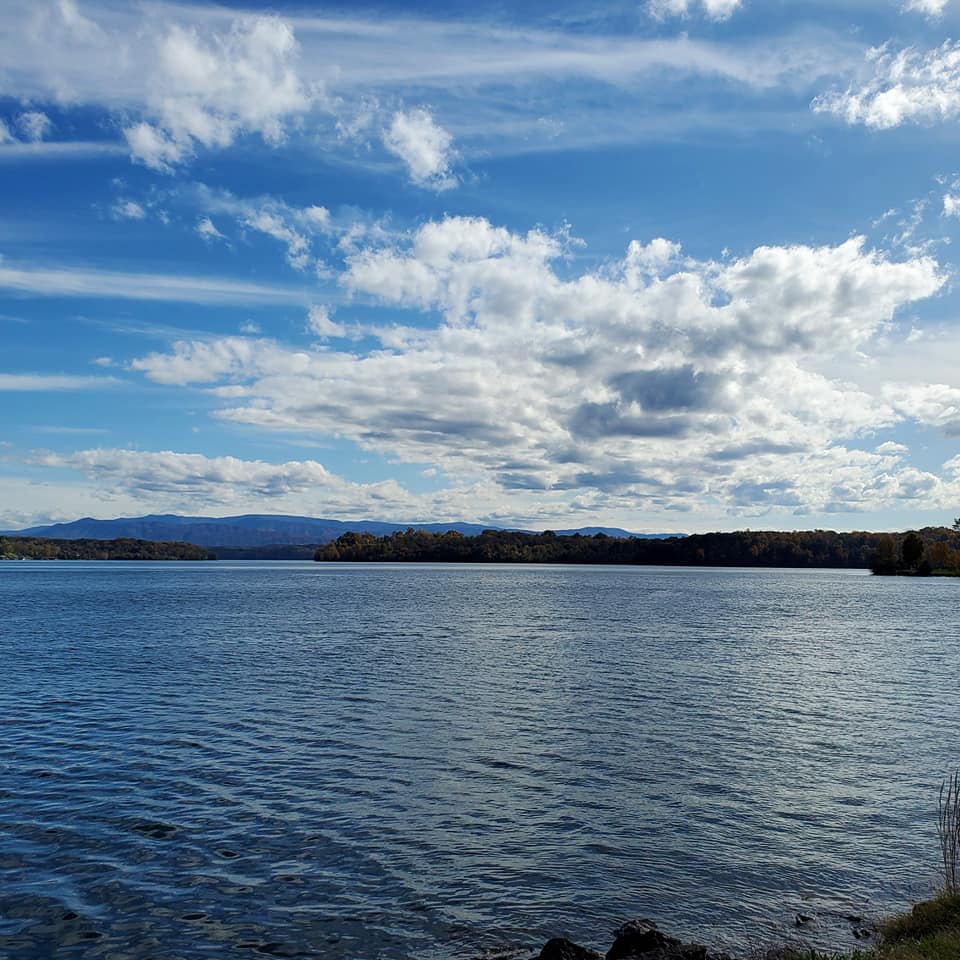 Just recently I spent a few hours sitting on the grass, overlooking the water, and could not believe my luck in having the entire place to myself. 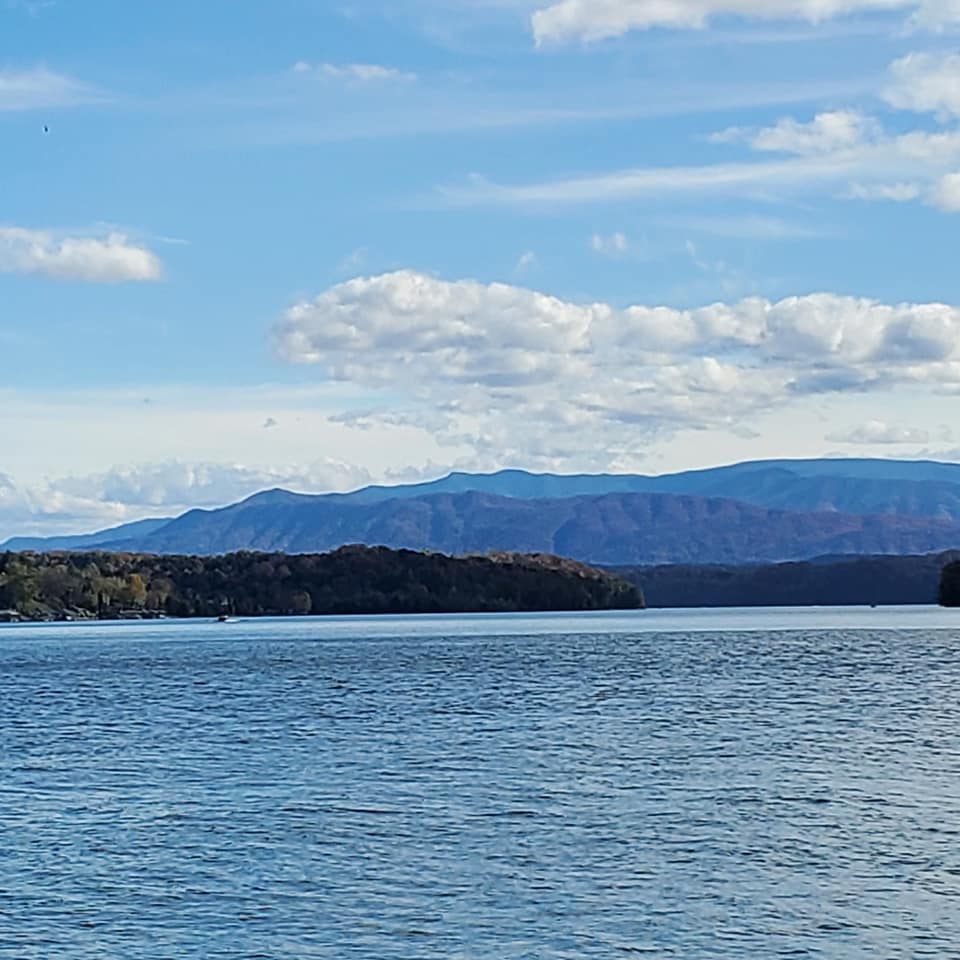 Sequoyah Birthplace Museum
Sequoya was half-Cherokee and half-European. He was born in 1776, nearly two decades after Fort Loudoun was constructed, in what used to be the Tuskegee village.

Tuskegee was allegedly created at the same time or shortly after Fort Loudoun was built, with assistance by the British, to provide housing for their Cherokee allies. Sadly the village was destroyed by fire, and the land is now flooded by the Tellico Lake. 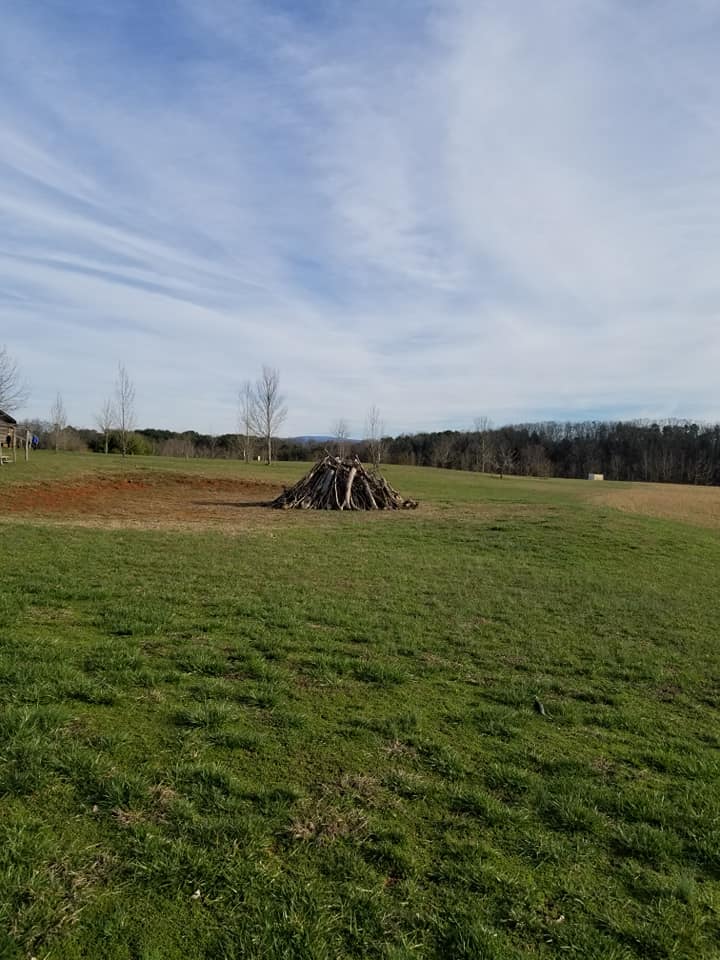 When he was a soldier, Sequoyah spent a lot of time thinking about how his fellow Cherokee could not write home, read (especially war-related news and military orders), or document anything about their lives like the European settlers. He was fascinated how they wrote symbols on paper, gave the page to someone else, and that person understood exactly what the author intended.

Sequoyah proposed the idea of developing a Cherokee alphabet and written language, which his friends and family ridiculed him for. Many sources say his wife constantly sabotaged his work and discouraged him from continuing.

After twelve long years, and with unwavering support from his daughter, Sequoyah finished his syllabary and began teaching others how to use it. 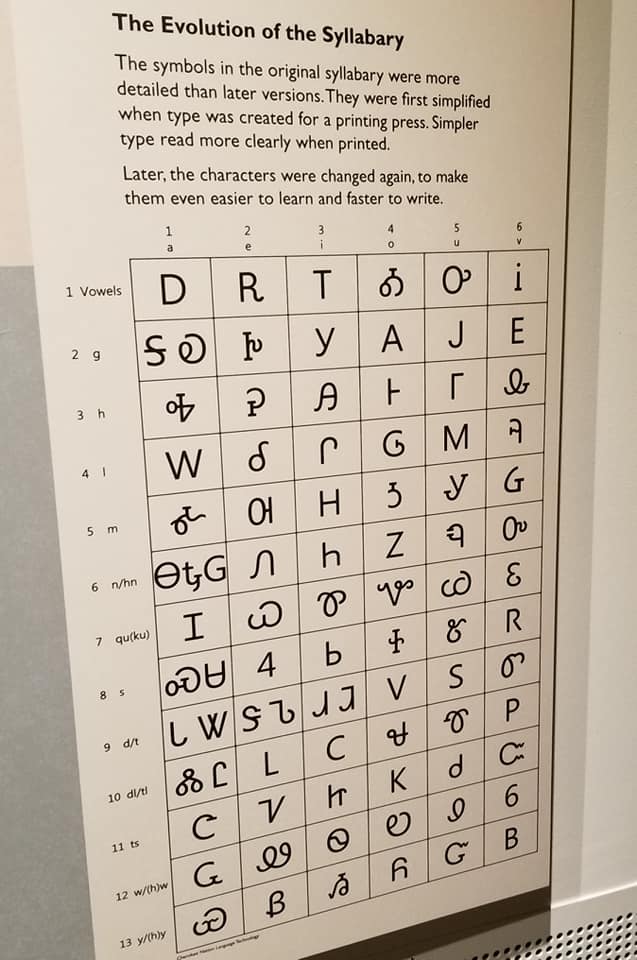 Within four years, the Cherokee Nation had mastered Sequoyah’s syllabary and the Cherokee became more literate than the average European settlers of the region. It is worth noting that his syllabary was so effective and precise, he and his daughter were accused of witchcraft and even put on trial.

Sequoyah also invented a numbering system that allowed him to keep financial records like a ledger. Having these new systems allowed the Cherokee to gain literacy, create and share information, advocate for themselves in legal matters, chronicle their personal and cultural knowledge and stories, and to navigate the new America. 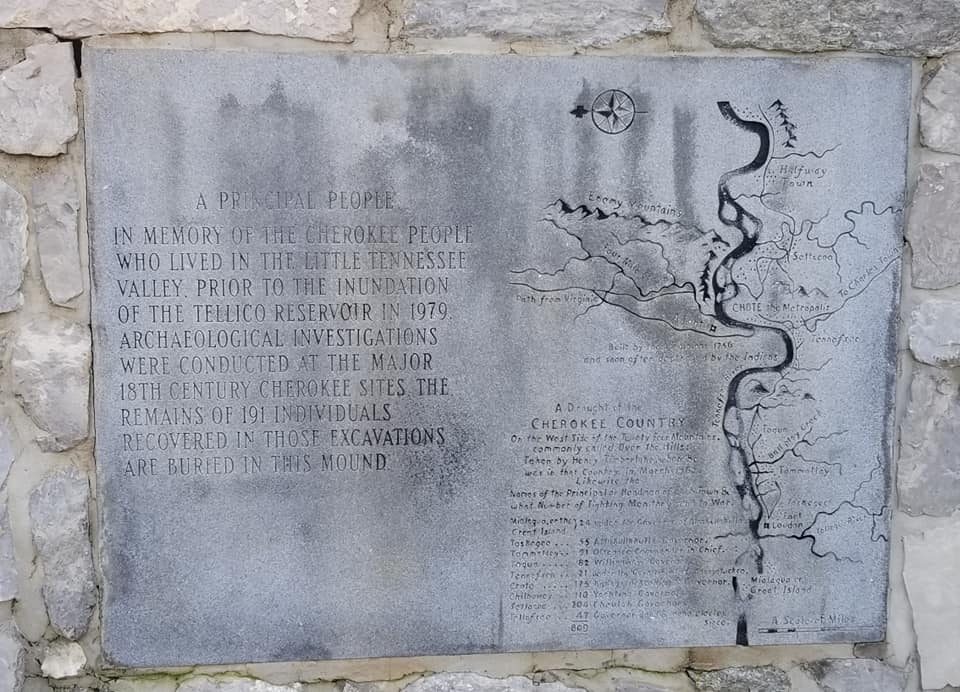 The Cherokee were the first Native Americans to have or use written language, and would likely not have survived without Sequoyah’s revolutionary contributions. The Sequoyah Birthplace Museum tells about Sequoyah and the Overhill Cherokee as a whole, their way of life, their innovations and inventions, and the people who helped and hurt them.

One example is the case of missionary Samuel Worcester who helped the Overhill Cherokee fight and win official ownership of their land during a Supreme Court case, but it was soon reversed by President Andrew Jackson.

The state of Georgia confiscated and divided Cherokee territory, gave it away to European settlers, and drove the Cherokee out. Jackson, if you remember, was the same chap who signed the Indian Removal Act and carved the Trail of Tears into the landscape of American tragedy. Wooster continued to be an ally to the Cherokee but his efforts were thwarted and he was ostracized by his own people.

An amphitheater, monuments, and burial mounds are on site. You can tour an example of a typical home that the settlers and some Cherokee lived in during the period and take a walk along the 1.5-mile waterfront path.

A short drive from Sequoyah Birthplace Museum will take you to the Tanasi and Chota Memorial Sites, which are an extension of the museum. The memorials were created in 1989 as a collaborative effort between Tennessee Valley Authority and the Tennessee Historical Commission Foundation. I have been twice and on both occasions, parking was plentiful and we did not cross any other humans.

Tanasi Memorial
Tanasi and the neighbouring town of Chota were, together, the home of the Overhill Cherokee and the Capital of the Cherokee Nation from 1721-1730. If you say Tanasi slowly you will make the connection of how Tennessee received its name.

Eventually the more popular Chota sprawled into Tanasi territory, war destroyed the towns, and then everything was flooded when TVA created a dam during the Tellico Dam and Tellico Lake project in the late 1970s.

Chota Memorial
Continue driving once you have visited the Tanasi Memorial and you will find the parking circle for the Chota Memorial. There is a short but lovely walk through a wide clearing in the woods that leads you directly to it.

A pillar for the entire Cherokee Nation plus six other pillars for each clan that lived here all form a large circle. 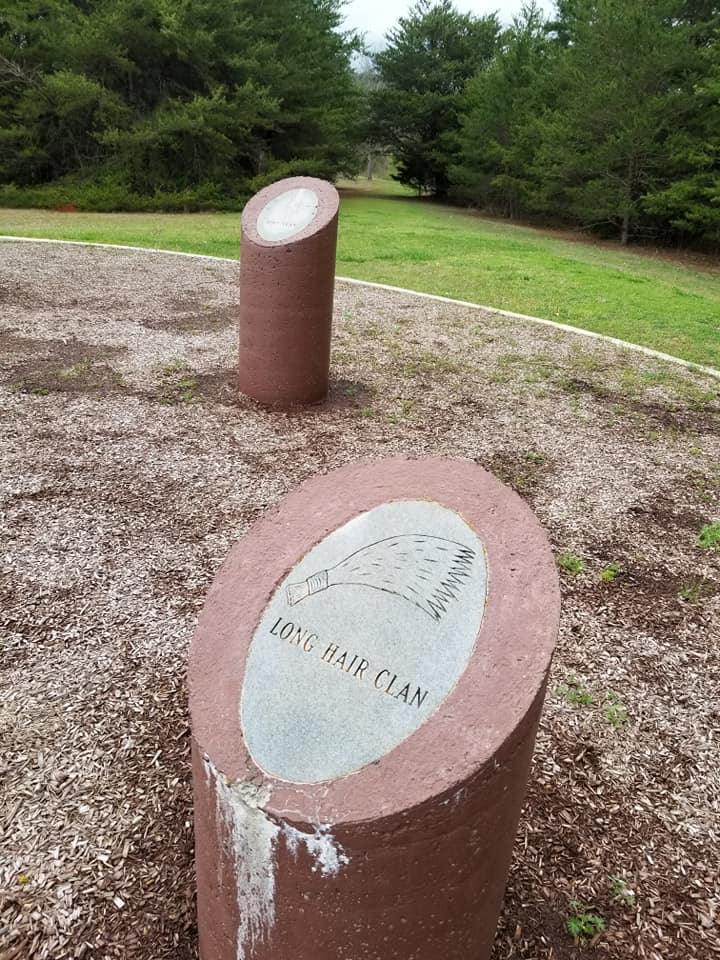 Oconastota, also known as Aganstata and as Stalking Turkey, was the most revered warrior (skiagusta) of the Overhill Cherokee. His remains were found during an archaeological dig and relocated to a spot at the head of the Chota Memorial.

The site itself is maintained by the Eastern band of Cherokee and was built on top of the original Chota townsite, elevated several feet above flood level.

Before TVA initiated its plans to flood the area, Tellico Reservoir archaeological project dug up an exciting amount of artifacts. Many of these can be viewed in the long-standing exhibit at the McClung Museum in Knoxville, TN.

I have had the honour of working with the film company NolPix Media as a production assistant for a couple films now, which collectively have been aired on PBS and other networks, plus nominated for TWO MidSouth Regional Emmy Awards and other awards.  I would be remiss not to mention the incredible films and documentaries they have produced, especially those that are relevant to Cherokee History and sites in East Tennessee.

Check out this short NolPix film for more info about Tellico Archaeology:

And also this trailer for Secrets of the Nolichucky River, a film about a buried Cherokee village that was recently discovered to be the missing link in Cherokee history:

On our way back from visiting the Chota Memorial, we have found our own relics strewn across the tree limbs and in the grasses. Who knows what goes in these ancestral lands when the sun sets. 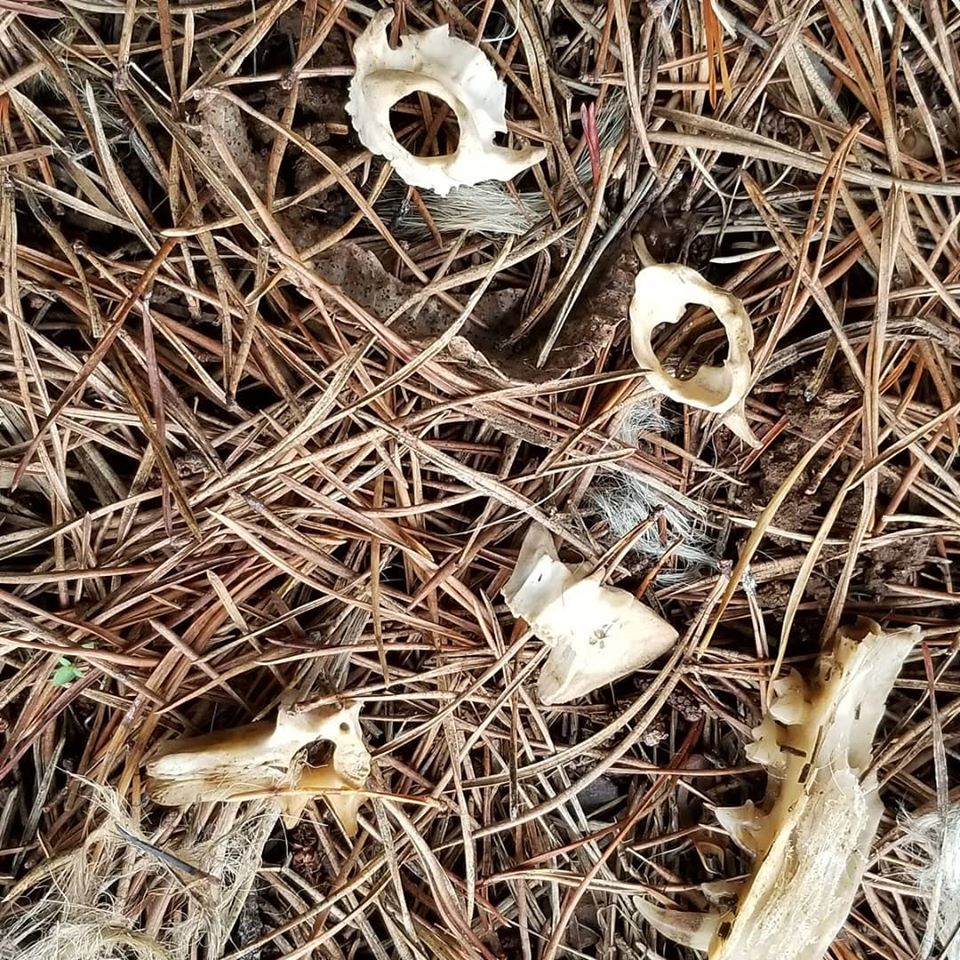 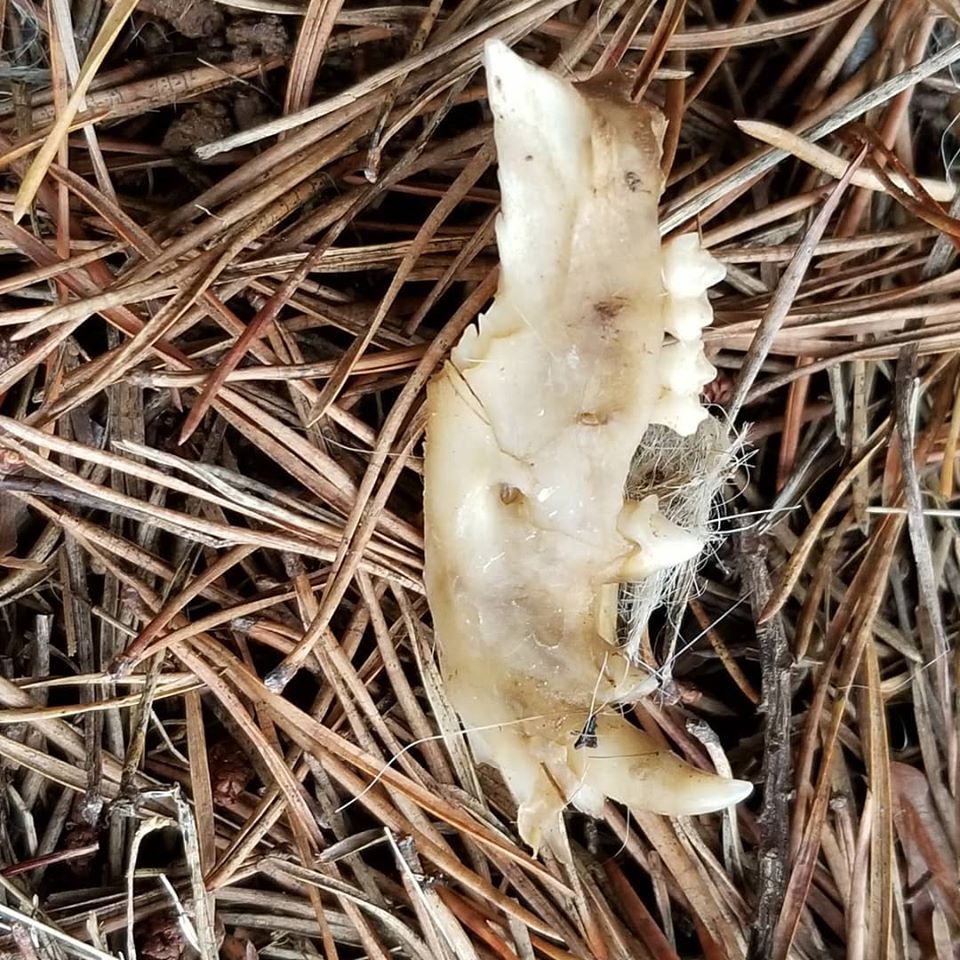 The community of Toqua is yet another Overhill Cherokee village that now lies underwater, but this one is ancient. Others in the area include Tomotley, Tuskegee, Great Tellico, Mialoguo, Chilhowee, Tallassee, and Great Hiwassee. I look forward to exploring those past and modern sites in the future.

Before you leave Vonore, make one last stop at Pizzeria Venti, which bills itself as “America’s Only Authentic Sliceria.” One slice is actually two perforated square slices, and they have a specialty they call Bocce Balls that we really liked. Housemade Italian meatballs are wrapped in dough and baked until golden, then covered in marinara.

*************
© Copyright Fernwehtun, 2015- Current. Unauthorized use and/or duplication of this material without express and written permission from this site’s author and/or owner is strictly prohibited. Excerpts and links may be used, provided that full and clear credit is given to Fernwehtun and Fernwehtun.com with appropriate and specific direction to the original content.