Miamisburg, Ohio is considered a suburb of Dayton. The first white settlers here were the Hole family and others from Virginia by way of Pennsylvania in the late 1790s. It became an official town in the 1920s and covers a little more than twelve square miles.

Miamisburg is also called Star City, allegedly after a Miami Indian chief/ medicine man looked up into the sky and saw a vision of seven stars.

Miamisburg is famous for the Miamisburg Mound, a prehistoric Indian burial mound of the Adena culture from around 1,000-200 BCE.

The Miamisburg Mound is on the National Register of Historic Places. It has 116 steps to the top and is nearly 70 feet high and 850 feet around, give or take a few inches from weather and erosion. It covers an acre and a half of land and geologists estimate that it is made of more than 50,000 cubic yards of earth.

Miamisburg Mound Park sits on 37 acres surrounding the giant mound, and is located about 70 miles from Ohio’s famous Serpent Mound. 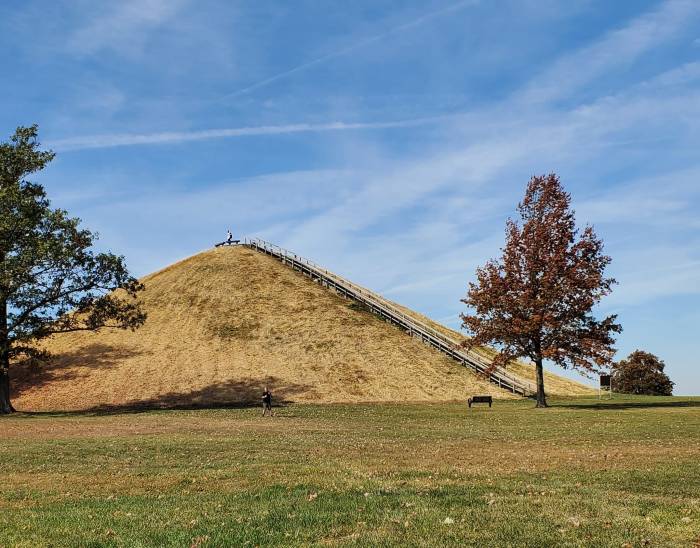 Miamisburg is even more notorious for its contributions to atomic energy and nuclear developments. Dayton proper was a seriously high-profile keeper of secrets during World War II, but after it ended, many operations were moved to the new Monsanto Miamisburg Mound Laboratory.

The Mound Plant was built in 1947 on 300+ acres and was one of the first US Atomic Energy Commission facilities. Nearly 2,500 agents worked in its 120 buildings, all classified operations with vigilant security, armed guards, and razor wire fences.

Experiments completed here are credited for keeping Americans ahead of the Nuclear game.

Workers made plutonium detonators for nuclear weapons and monitored every aspect of US nuclear defense until the Cold War ended. When that work was discontinued, the plant made nuclear power generators for space probes, until the DOE closed it down for good 1993.

Both men became co-directors of the Manhattan Project, and Thomas’ lab in the Mound Laboratory processed Polonium-210 which ignites atomic bombs. In the 1950s, Mound Laboratory began processing Tritium and soon became known as the industry leader. 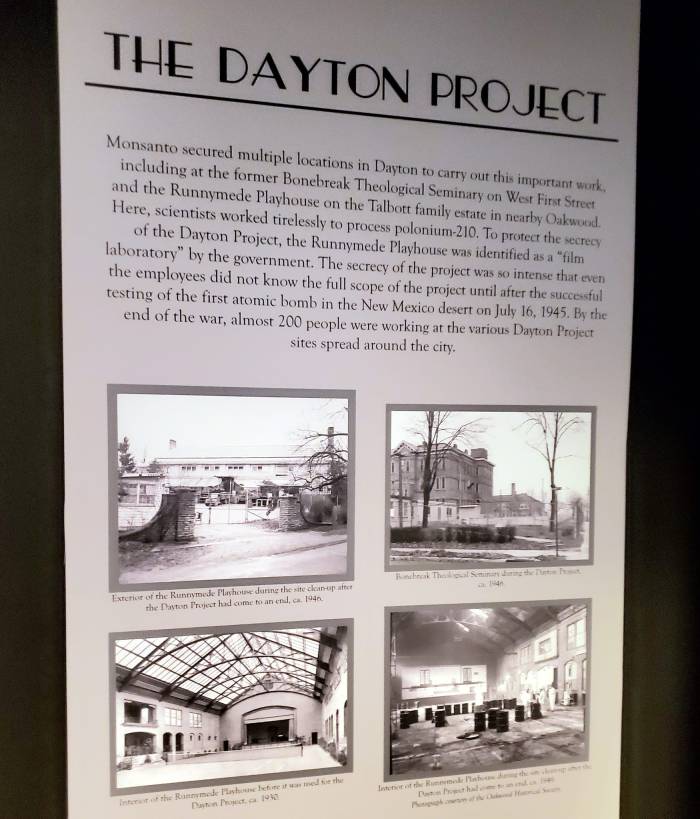 I remember touring the Oak Ridge National Laboratory facilities in Tennessee years ago and seeing an infographic that mentioned this insanely important project.

I wondered about the Monsanto connection…yep, that Monsanto. I also wondered why the Miamisburg/Dayton Projects are hardly given any credit like the Manhattan Project, who completed similar work during the same period of time, and why the Miamisburg/Dayton Projects have not been commemorated by the National Park Service in the same regard as the Manhattan Project National Historical Park.

Still looking for answers on that one.

The Mound Science and Energy Museum was closed when I visited, but I eagerly anticipate returning and devouring its informative contents.

As for the rest of Miamisburg, it is a colourful little town, full of pride for its outdoor adventures and arts & cultural offerings.

Miamisburg is super bike friendly, and even has a “Bike Friendly” badge of honour that local business can display letting visiting cyclists know they welcome them, and that they offer water, restrooms, bike parking, and trail maps.

The Great Miami River Trail, one of the longest and most prominent in the country, passes right through downtown Miamisburg and is often filled with both hikers and cyclists alike.

Another fun trail through downtown Miamisburg is the Mosaic Walking Trail Tour with a scavenger hunt-like challenge to find the hidden star at each site.

My favourite Miamisburg shops are the Enchanted Candle Apothecary and Curious Styles Coffee Shop (below).

I enjoyed stopping by both Lucky Star Brewery and Star City Brewing too. 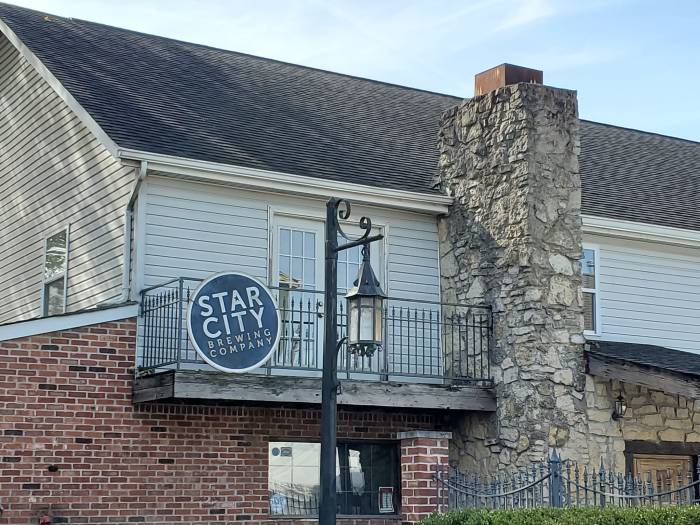 Fans of vintage, antiques, and thrifting will love Star City Consignments and Down on Main Street Antiques.

Music fans will love New 2 U Vinyl and the vibrant mural on the outside of the U! Creative building which used to be a record shop. I literally squealed when I spotted Billie Holiday (bottom, right).

Another awesome mural is across the street, on the side of the historic Plaza Theater, and the Welcome to Miamisburg mural above is on the backside of the theatre. 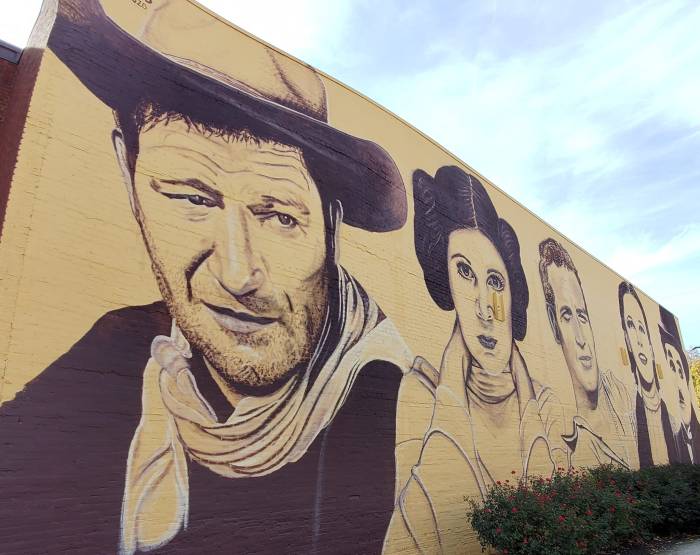 There is a crazy long-time rumour among older residents that Charlie Chaplin was conceived in Miamisburg, so he is definitely featured among other Hollywood film stars.

The Plaza Theatre itself is adorable, and known for its abundance of classic films as well as contemporary films. Tickets are always five bucks, unless there is a special event.

Historic buildings like the Baum Opera House, Gebhart Tavern Museum & Historical Society, and the old Market Square Building (home of the retail pop-up incubator, Thrive) are all beautiful, as well as the A. R. Stocker building (home of M & Co) and the Silberman Building. 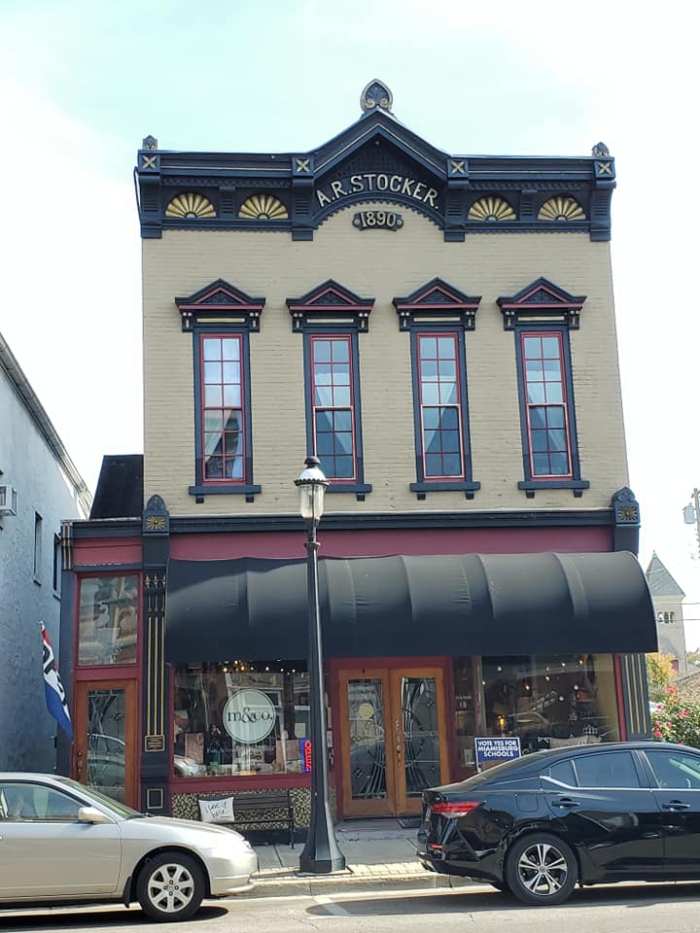 I really liked the building at 12 N Main Street, home of Rustic Rental, though I am not sure how old it is.

Stop Bullwinkle’s Top Hat Bistro, the first place I ever visited in Miamisburg nearly two decades ago. For something more casual, see if you can track down the ubiquitous Miamisburg delicacy, Hamburger Wagon.

If you have a sweet tooth, be sure to visit Grandpa Joe’s Candy Shop.

Speaking of Mounds earlier, I made sure to block out enough time to tour the Sunwatch Indian Village, just nine miles from downtown Miamisburg toward Dayton.

The Sunwatch Indian Village, in affiliation with the Boonshoft Museum of Discovery, is a living museum and interactive site commemorating the first Paleo Indian hunter-gatherer tribes, who were part of the Fort Ancient Culture, and lived in what is now southern Ohio and northern Kentucky.

They were not known to build massive burial mounds like the Adena and Hopewell people, but they did build smaller mounds and are credited for building the Serpent Mounds nearby.

Fort Ancient Culture is divided into Early, Middle, and Late periods, with the Sunwatch people falling into the Middle period between 1150 and 1450 AD.

Researchers and anthropologists alike have had difficulty determining exact lineage of the Sunwatch people, but believe they became a mixture of Shawnee, Mosopelea, Tuetlo, Potawatomi, Sauk-fox, and Cherokee tribes.

In more recent history, the Vance family once owned this land and discovered hundreds or relics and artifacts in the soil while plowing. The property was eventually sold to the City of Dayton in the 1950s and a civil engineer/archaeologist named John Allman began further excavations. 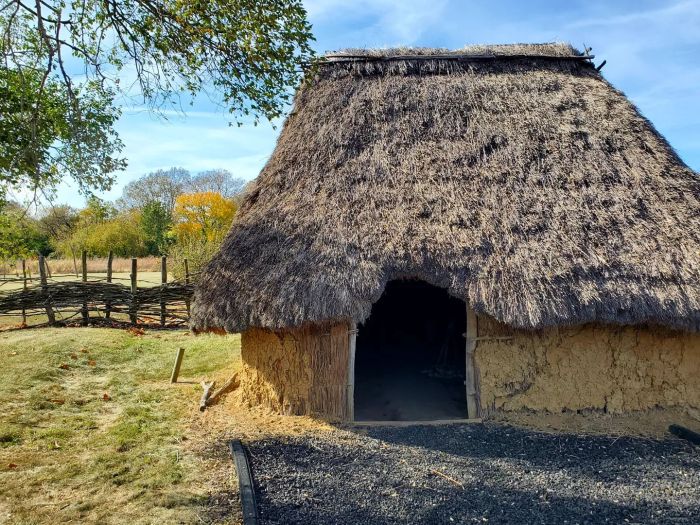 Allman was credited in the 1960s for identifying this site as a Fort Ancient Culture village. Additional excavations were continued by J. Heilman in the 1970s, with enormous support from Virginia Kettering. In 1975, and the City of Dayton’s Incinerator Site.

When the Sunwatch Indian Village was finally created, it joined the National Register of Historic Places, and eventually became a National Historic Landmark.

Remnants of at least 19 structures have been identified here, and the site is  frequently used to host events by local Native/Indigenous people, rather than sitting as an empty monument. 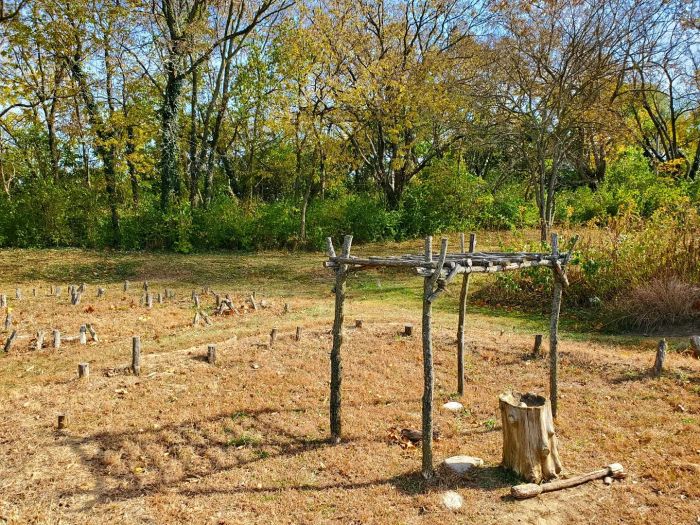 The Village Sun Calendar, like a sundial, was used to track the time and seasons each year. Rituals were held between the spikes of the circle, and offerings were left inside it. 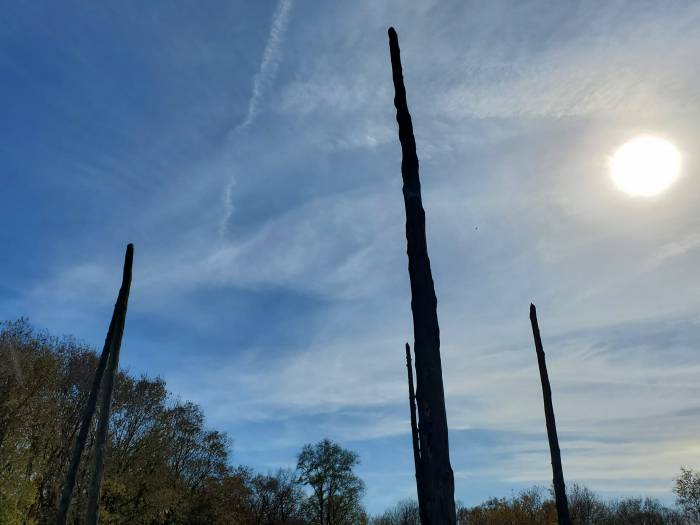 In the area for a while? Follow me to Germantown and Dayton (in progress).