St. Anne’s Hill is the second oldest of Dayton’s historic districts. It is located immediately east of the Historic Oregon District, with the Historic Huffman District at its eastern border.

St. Anne’s Historic District was designated as such in 1974, and has been on the National Register of Historic Places since 1986. 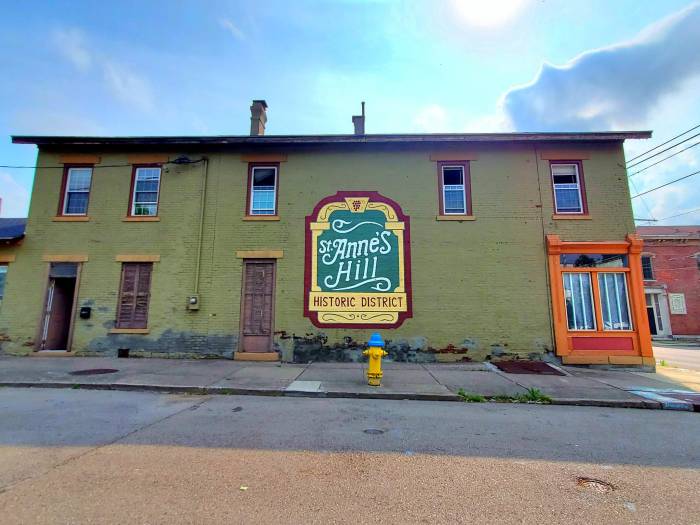 In the 1800s, this was a place for farms and homesteads. Like most areas in southern Ohio and around the Ohio River, a boom of German immigrants moved in during the 1800s. They quickly platted out new towns, opened new businesses, plowed the soil for their farms, and began building amazing craftsmen homes, as Germans do.

St. Anne’s Hill is considered to be one of the best and most intact examples of an original ethnic German neighbourhood in the US. It continues to be a hub for German culture and celebrations, with the Dayton Liederkranz-Turner Society as its beacon.

It is hard to miss the “DLT” with its distinctive timbered exterior, folk design, and abundance of flags and window boxes.

The walls surround the DLT are covered in mosaics and murals by local artists. Most of them depict scenes from the Old World, back in the Fatherland, and important traditions.

Of course, this is the place for Biergarten parties, German food and festivals, Oktoberfest, and the Christkindlmarkt holiday market.

The Dayton Liederkranz-Turner Society is Dayton’s oldest German Society, its mission to promote and preserve German culture and traditions since 1890.

In the early years, St. Anne’s Hill’s most notable resident was Swiss botanist Eugene Dutoit, namesake of Dutoit Street. He built the area’s first mansion in 1838 on 111 acres, and you can see it at 222 S. Dutoit Street.

Dutoit’s homestead included a vineyard, orchard, and plant nursery, where he carried out his work in the field of Botany. There was even a community that took on the name Botany Hills. Locals eventually called his land “Vinegar Hill” due to the scene from ever-ripening fruit and plants.

Soon, the Streetcar System laid its tracks through St. Anne’s, and you can still see evidence of this today. 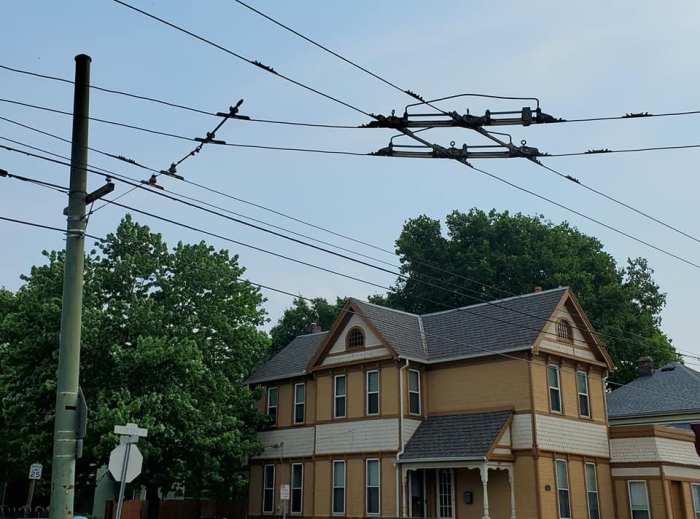 There is an enormous mural depicting a nostalgic streetcar scene on the exterior of  the M & R Electric Motor Service building.

St. Anne’s Hill became quite the affluent neighbourhood, in time.

In the 1850s, elaborate new homes like the Steamboat House at 6 Josie Street started popping up.

The eye-catching pink house has a double-decker wraparound porch that gives it the appearance of a steamboat.

The owner of the Steamboat House, Jacob Joyce, had a son named Frank, and Frank built this mysterious Queen Anne home (below) over at 516 McLain Street in 1892.

The “Sister Houses” at 204 and 208 S. Dutoit were built around the same time, in the vernacular Gothic/Romanesque style). I was not able to get a good photo due to the giant trees in front of them, so I will share these poor-quality photos from Zillow.

To the left of the “Sister Houses” are these two that I just love: 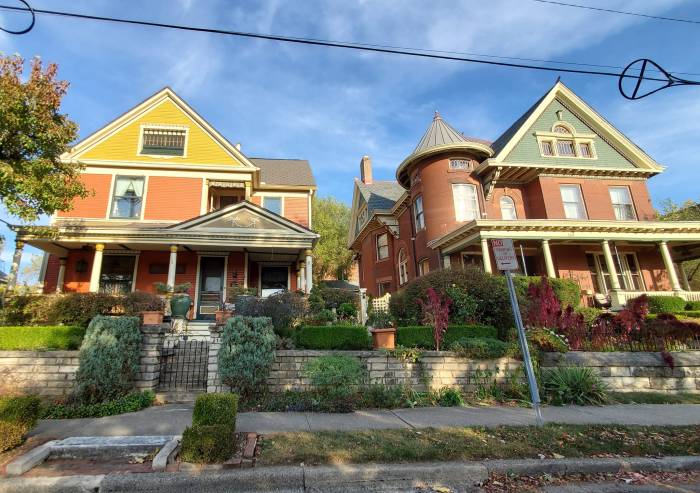 The Bossler Mansion at 136 S. Dutoit Street was built in the French Second Empire style. 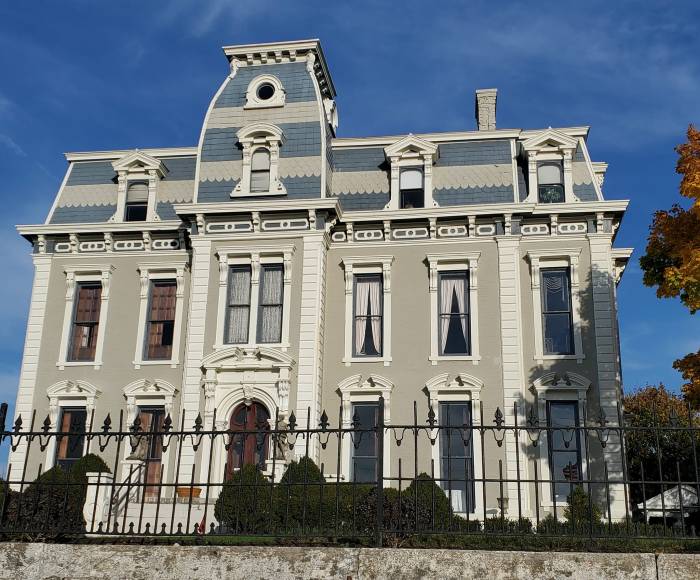 It has become so iconic in representing St. Anne’s Hill that it now has its own hand-crafted sign for that perfect Insta shot.

More and more Germans kept moving in throughout the decades, and each one left an indelible mark on the community. 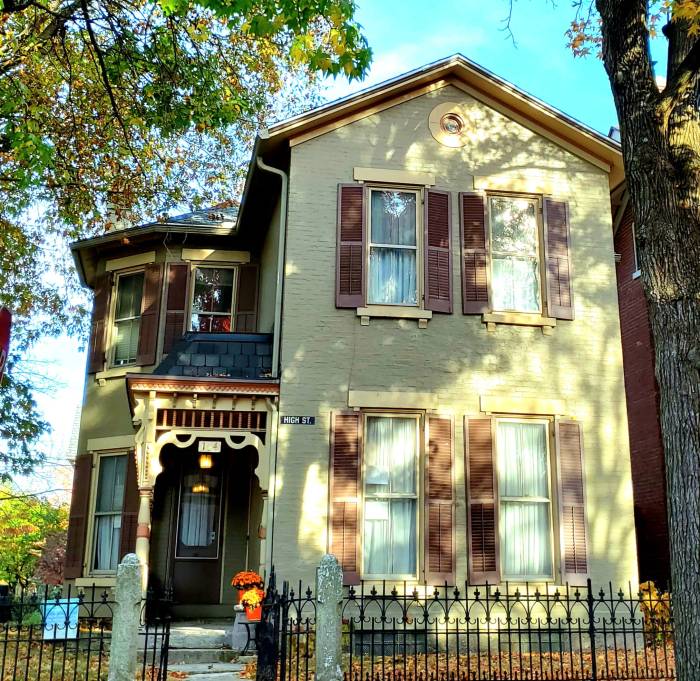 His red sandstone Romanesque Revival masterpiece is just down the street from his home, at 70 High Street.

The former church appears to be a multi-unit dwelling now.

The Italianate former Stockert Saloon on E. Fifth Street was built in 1878. Recently it was the home of St. Anne the Tart, a coffee shop and bakery, but now sits empty.

Across the street you will notice the building with a lovely botanical mural, possibly a throwback to botanist Eugene Dutoit. The Local 937 Deli is currently preparing to open its doors here, so I will be sure to visit again next time I am in town.

Fifth Street is the main drag through St. Anne’s Hill, but La Belle, High, and McLain Streets are packed full of must-see homes.

The fact that these homes survived the Great Flood of 1913 and are still standing is nothing short of a miracle, though largely due to elevation. When homes in nearby communities were submerged under water, the people of St. Anne’s Hill opened their doors as a refuge.

When the Great Depression stripped everyone of their resources in 1930s, many residents of St. Anne’s Hill turned to renting out rooms, or converting the largest houses into multiple units. Sadly, this was just the beginning of decades of decline and loss of original structures in St. Anne’s Hill.

It was not until the late 1970s that longtime residents and preservationist rallied together, obtained an official historic district status, and got to work on taking back their neighbourhood.

Their efforts have paid off, and today St. Anne’s Hill is a vibrant community with fourteen blocks of restored homes, wide and pristine streets, and towering shade trees.

This beauty at 110-112 La Belle Street has the appearance of lacy white trim around its windows.

This old irregular Queen Anne home at 140 La Belle Street could use some love, but I adore the scale shingles and the triple window on the ground floor.

This building at 10 McClure Street is a collection of condos, but I have to stop and gawk at the odd bulging windows every time I drive by. You can see it just past the Fifth Street Brewpub.

William Bomberger was a wealthy German lumber magnate who eventually accepted the role of Treasurer for the City of Dayton in the late 1800s. His estate on Fifth Street was called Bomberger Hill, and it was sold in 1908 to become the Bomberger Center.

This was the first public recreation center in all of Ohio, complete with sports tracks and fields, a pool, a wading pool, baths, a full gym, club rooms, a dance hall, and an extensive English and German library. 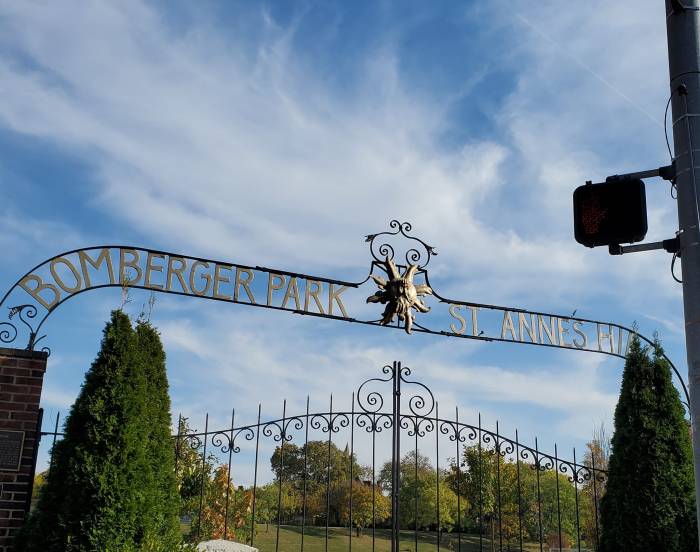 Over time it was sold again. The land is currently Bomberger Park, and now the building is owned by the Ahiska Turkish American Community Center of Dayton. 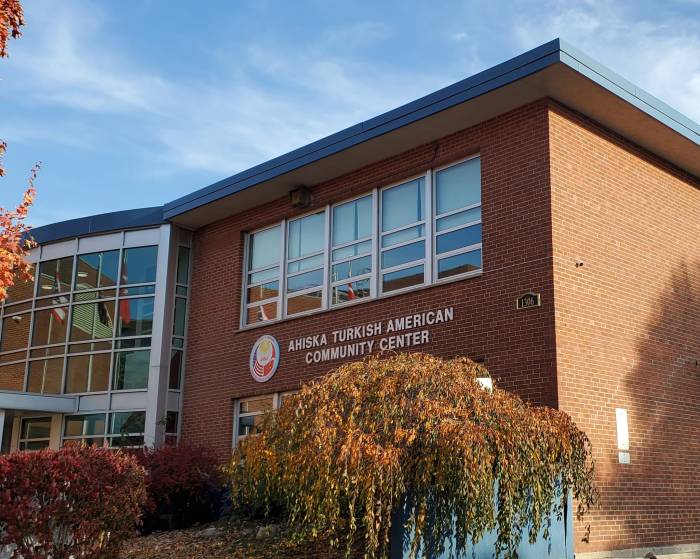 A few times now, I have left the Oregon District and driven into St. Anne’s, noticing how barren this short stretch connecting the two historic districts is. It seems like there is so much potential for something nicer, and the terrain looks like it still holds imprints of something big in the past, so I did some digging.

Haymarket was once a tiny neighbourhood that thrived along Fifth Street between the Oregon District and St. Anne’s, approximately from the current Dublin Pub down to Bomberger Park, tapering southward until it reaches Hwy (US) 35.

In the center of old Haymarket is the Dayton Towers high rise apartment complex, separated from Bomberger Park by Keowee Street. Haymarket Street, later named Pearl Street, was Dayton’s red light district. It was three blocks long with an assortment of respectable red brick Victorian buildings, which kept any protests about what went on behind closed doors on Pearl Street at a minimum.

Haymarket was demolished in the late 1950, creating an uproar from the neighbourhood’s primarily black population.

The City of Dayton held strong that it was simply because the structures were all dangerously crumbling and condemned, the tiny crooked streets were no longer safe to navigate, and that water, sewer, and other vital resources were not up to code in order to keep people healthy or to support the neighbourhood’s steady growth.

Children and teenagers still play in Bomberger Park each day, and the Dayton Towers can be seen in the background.

Stivers High School was built in 1909 and served as Ohio’s first vocational high school. It is now Stivers School for the Arts, and it is one of the most remarkable structures in St. Anne’s Hill. 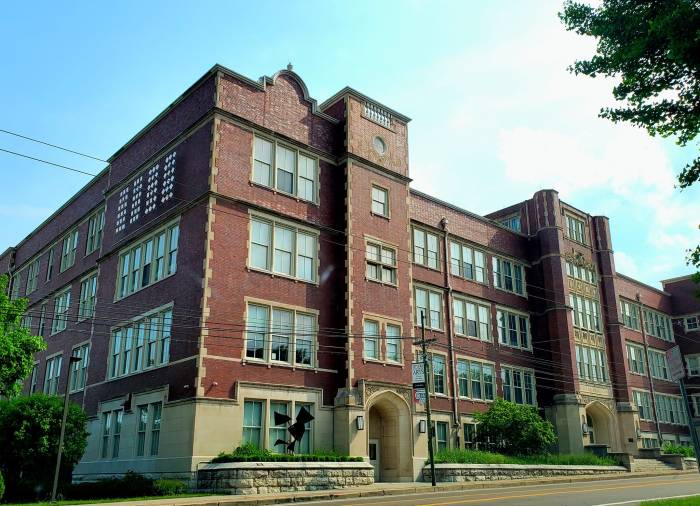 St. Anne’s Hill shares many attractions with its close neighbour, the Huffman Historic District. The Fifth Street Brew Pub is the social pulse of the two districts. 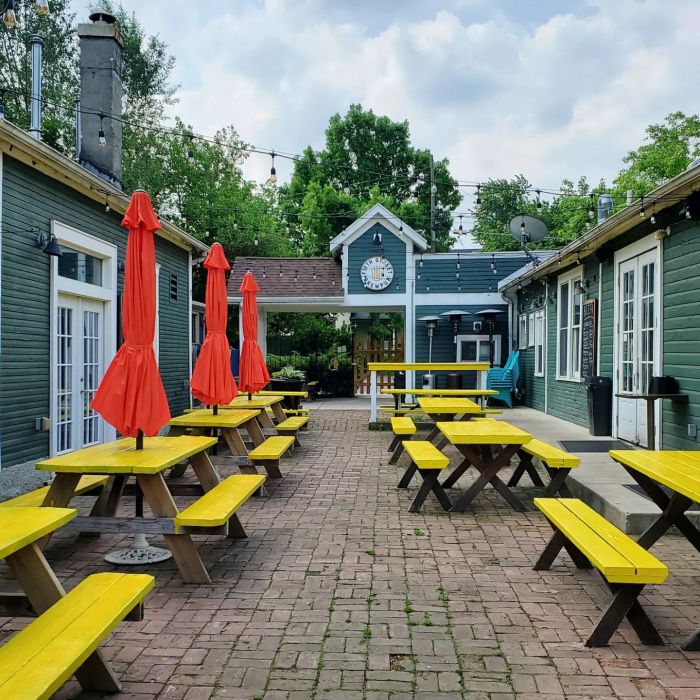 Gem City Catfé is your one stop shop to pick up a hot drink and a new furry friend.

Hue House is a fine art supply and studio that also makes its home in a restored historic building.

Stoney’s Munchie Bar, Kung Fu BBQ, and the DK Effect “Brewcade” are other options for food, drink, and socializing in the neighbourhood.

St. Anne’s Hill is known for its annual events like Trash ‘N Treasure , Dayton Porchfest, and its Dickens Christmas Tour. You can follow the neighbourhood activity on Facebook or learn more about it on the official St. Anne’s Hill Historic District website.