Alright, I had the song for this entry picked out from the first moment I ever rolled into Black Mountain. There is a mural on the side of a music venue called White Horse, Black Mountain in the main intersection of town. You can’t miss it.

Every time I see it, I am compelled to sing this old favourite by the Danish synth-pop band Laid Back:

As scandalous as the title of this blog might seem, it actually has nothing to do with cocaine or meth. Black Mountain, aka Dark City, took its name for its location in the Black Mountain range of the Appalachian Blue Ridge Mountains.

Black Mountain was first inhabited by the Cherokee and later became a small village called Grey Eagle until it was incorporated in the early 1890s. Its proximity to the Blue Ridge Parkway and Pisgah National Forest makes it an nature lover’s dream.

The town is around 6.5 square miles and has a population of almost 8,000. Several novels mention or are centered around Black Mountain, including those by authors Patricia Cornwell and Nicholas Sparks. A few key scenes from Three Billboards Outside Ebbing, Missouri were filmed there, and the film has many ties to the nearby town of Sylva.

Just north of Black Mountain is the Seven Sisters Mountain Range, named for its seven closely-knit peaks which ascend in unbelievably perfect steps. The Seven Sisters have inspired a tap room and a gallery in the town, but you will most likely find that this area is called Middle Mountain on maps.

West Ridge Trail will lead you from the second sister to Greybeard Mountain, which is often called their father. A large amount of this land is privately owned, including what is owned by Billy Graham and other families in the Montreat community. The West Ridge Trail loops for approximately 3.5 miles around all the peaks, but camping and biking is not permitted in most areas.

Any Black Mountain visitor would be remiss not to visit the Swannanoa Valley History Museum.

The museum serves as the county’s historical archive and has a diverse collection of texts, photographs, local art, infographics, videos, news clippings, and other artifacts about the history of Black Mountain and surrounding area.

Distilling and blanket manufacturing were huge industries there back in the day. You might be surprised which caused the town the most legal trouble! 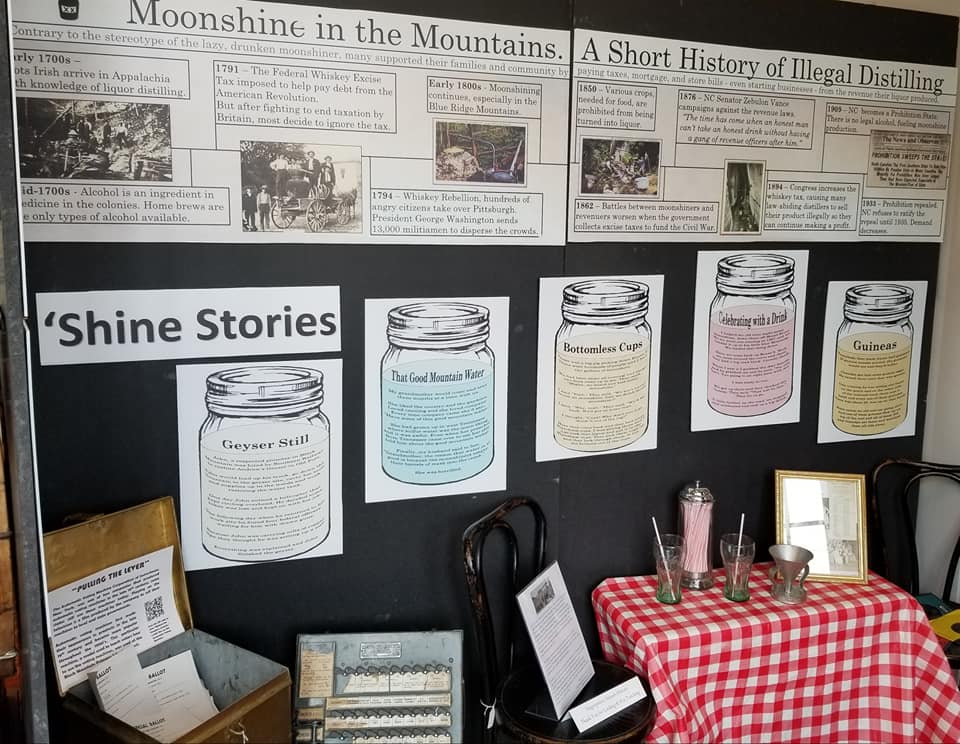 Black Mountain residents seem to have always embraced eclectic cultural events with a sense of humour, as shown by a regular “Womanless” beauty pageant. 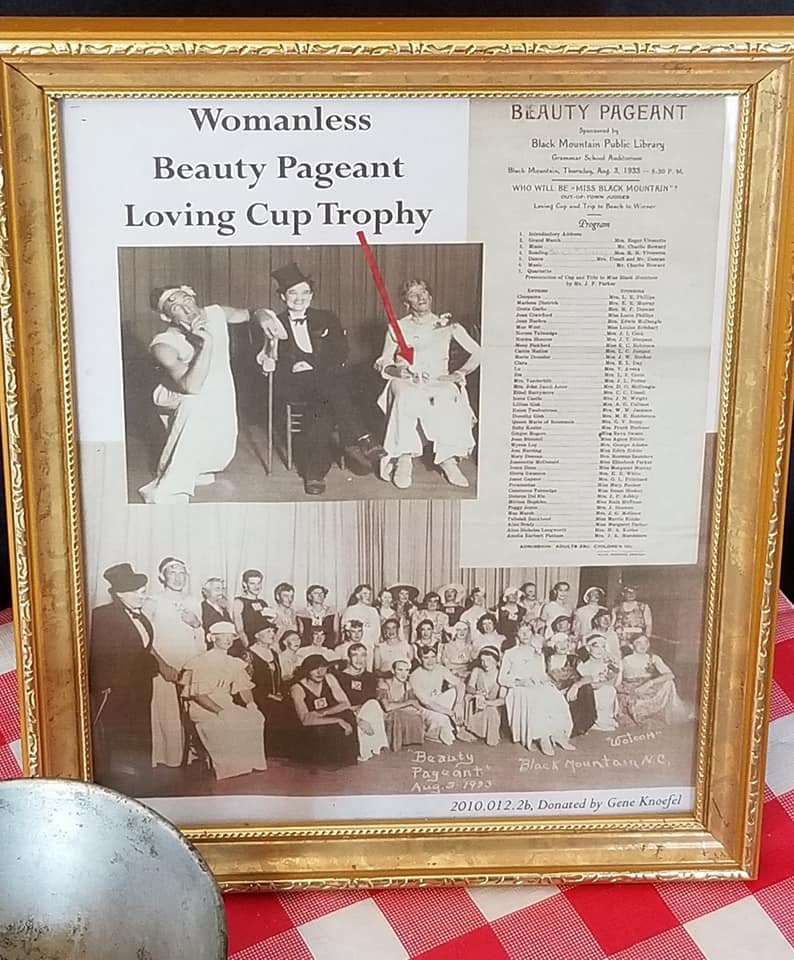 There is a monument park dedicated to Grey Eagle that tells about the history of this name. You can find it near the railroad tracks and a boxcar that now serves as a gift shop and welcome center. 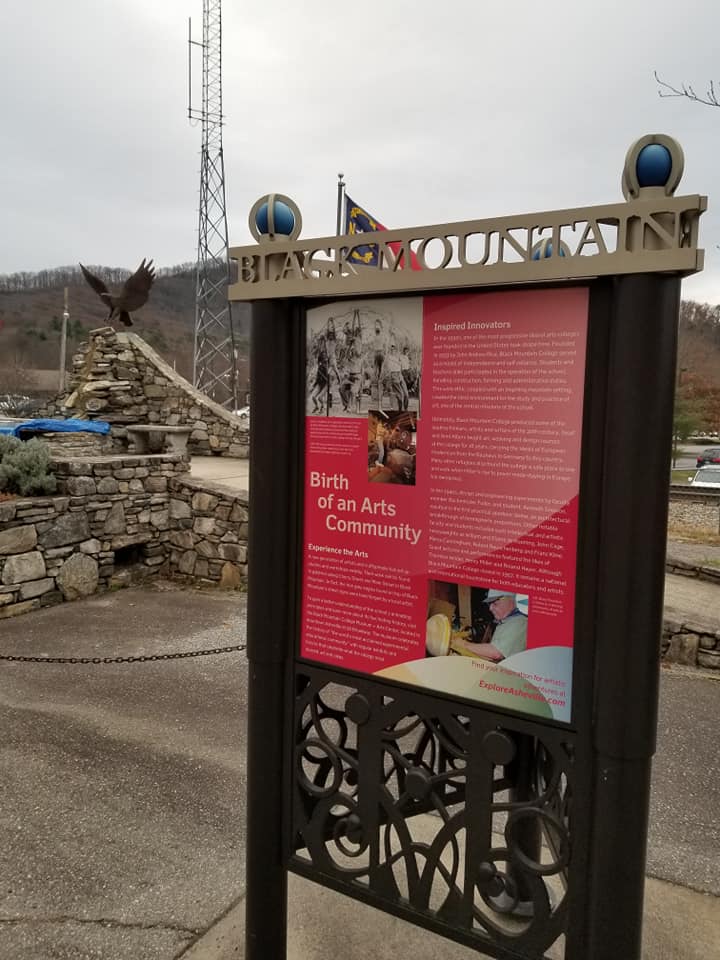 Behind it you can catch a glimpse of the Seven Sisters.

Black Mountain’s Visitors Center is located just a few blocks away. Volunteers run the gift shop and are loaded with local lore and suggestions. They sent me out the door with a map, some postcards, and rack cards for nearby businesses I would enjoy, and I did.

I also learned that Raphael Guastaviono, the Spanish architect of Biltmore Estate and Asheville’s Basilica of St. Lawrence fame, also designed and built the Rhodendron estate in Black Mountain. This estate is now used by the Christmount Conference Center.

Black Mountain’s town center is easily walkable, and is based around the intersection of State Street and Broadway. Other main streets off State Street include N. Dougherty Street/Sutton Avenue, Church Street, Cherry Street, Montreat Road, and West Street/Richardson Boulevard.

You can basically walk downtown from one end to the other in half a mile. 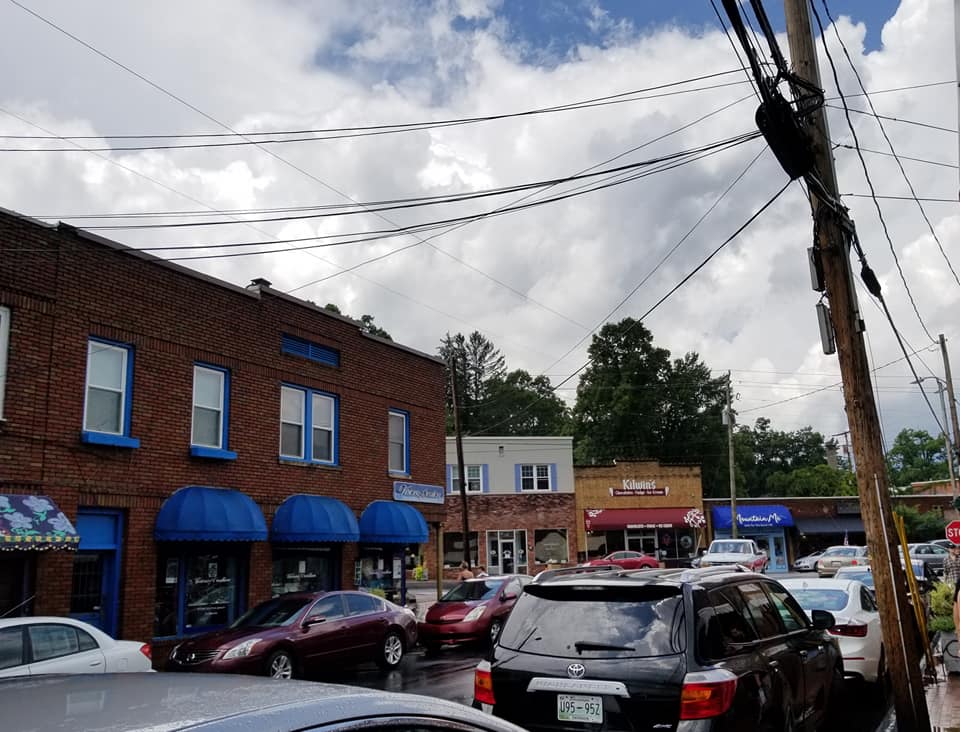 BAD Craft is my favourite shop in Black Mountain. The owner is charming, and he is knowledgeable and passionate about the local artists he showcases.

The space is full of so many unique and bizarre treasures, like these brass instruments that have been converted into digital music players. 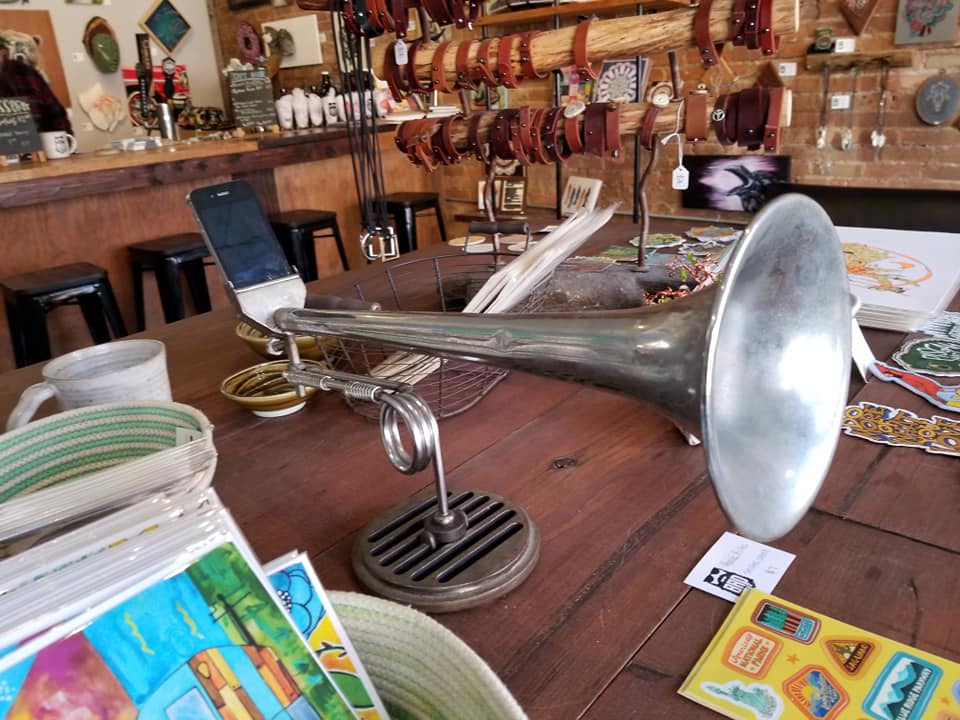 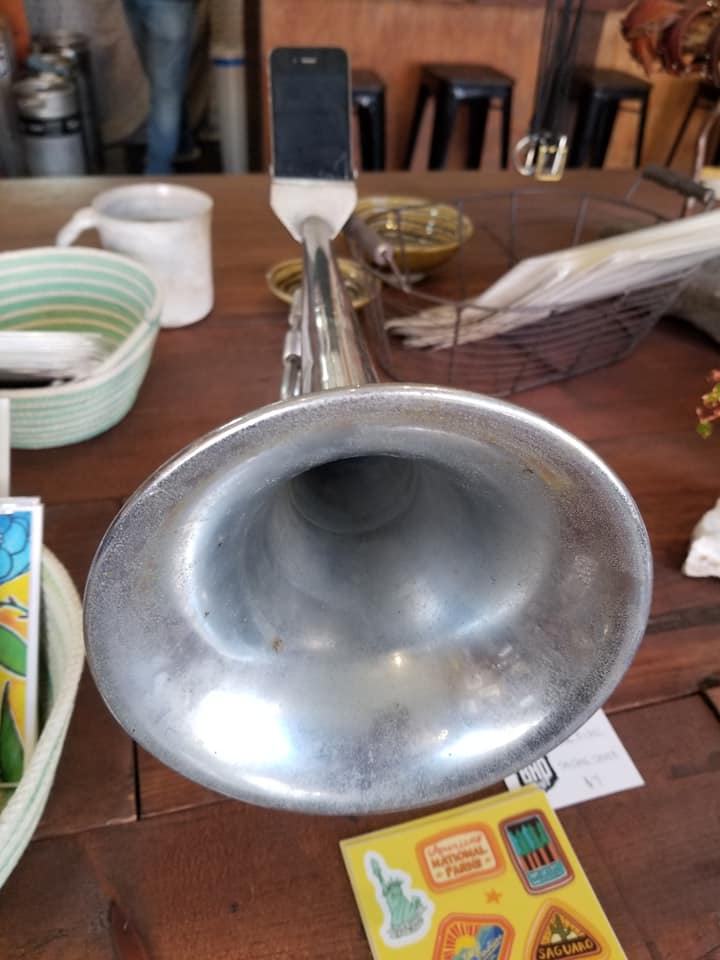 Visitors can sit at the bar and enjoy sweets and local craft beers while watching a band, joining a listening party, or checking out a new exhibit. 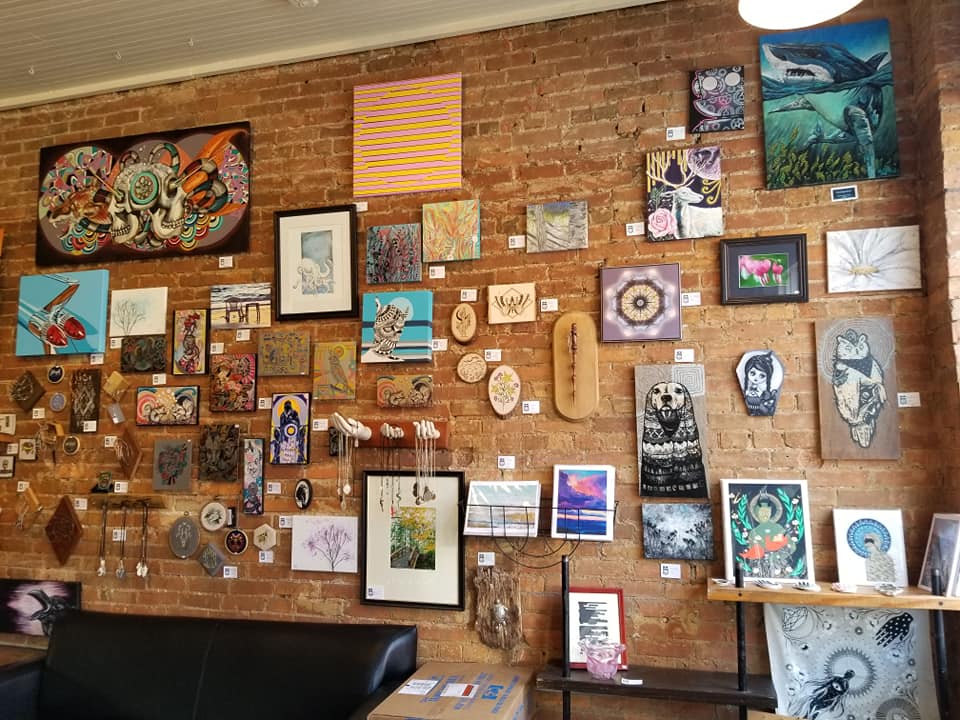 How dreamy is it that the first book I noticed was Thomas Mann’s The Magic Mountain?

Sassafras on Sutton is another bookstore in town but I have not been able to visit yet. It was closed the first two times I visited, and under construction the last time. I anticipate that someone I know will check it out before I am able to return, and report back to me.

Black Mountain has some serious counter culture, by which I mean coffee, cafes, bakeries, restaurants, and breweries.

Dynamite Roasting Company  is an artisan and organic coffee company with a cozy cafe. They are dedicated to serving their community and the communities that grow their coffee beans by providing fair trade wages. 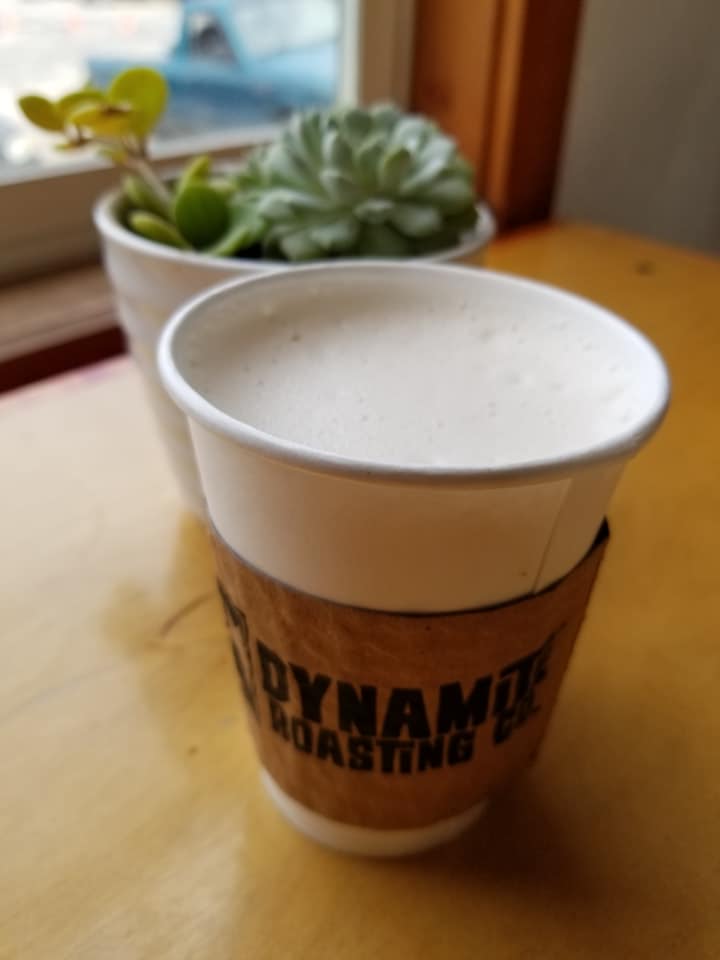 As I enjoyed my coffee, I overheard animated conversations in English, Portuguese, and Italian. There was an interesting mix of ages and styles, and it just felt comfortable here. 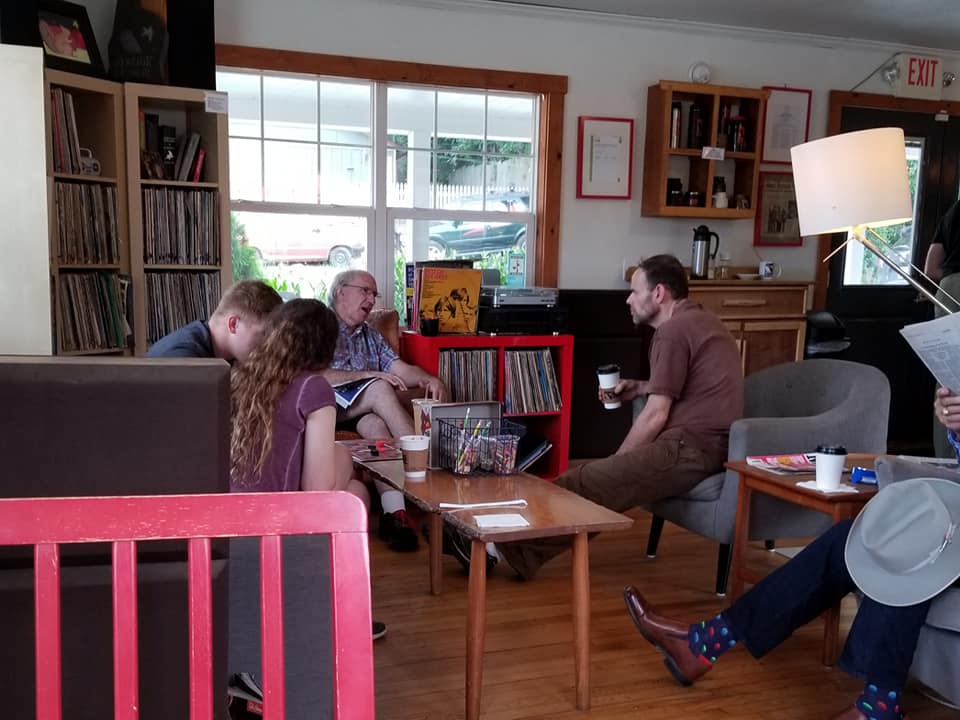 Dripolator Coffeehouse is right next to the Swannanoa Valley History Museum and has free parking right next door.

I felt a bit of FOMO swelling inside me as I read a poster for their new CBD latte and silently nodded along with its prompts- why yes, I am very anxious and yes, I could use a bit of relaxation today.

Four Sisters Bakery is a quaint little cafe inside the Red Rocker Inn B&B, slightly removed from the town center.

I liked the arrangements of fresh wildflowers on each table and really enjoyed their lox spread, which has all the essentials of a proper lox bagel mixed into cream cheese and easily spread on bagels.

I can not yet vouch for the Red Rocker Inn, but the grounds were lovely and it seemed like an ideal place to rest and reset.

Having German ancestry, I feel an inherent duty to visit any German style restaurant I encounter, and Berliner Kindl is one of the best I have been to in the US. 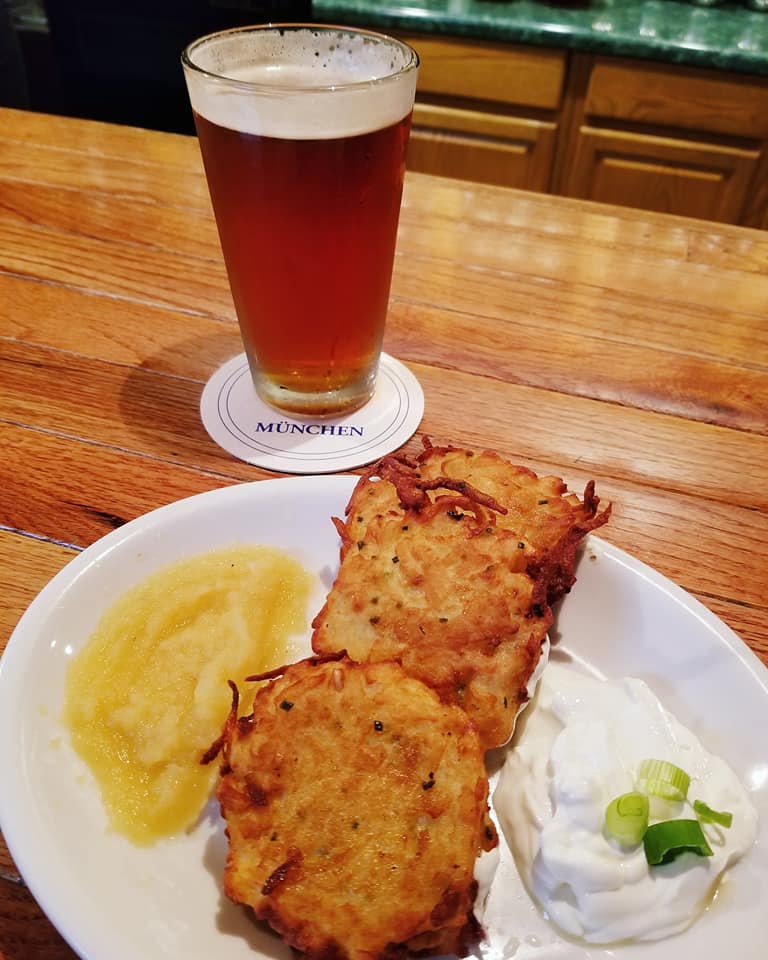 The Kartoffelpuffer (potato pancakes) are crisp and seasoned, served with applesauce and sour cream as they should be.

Everything was perfectly executed and with no signs of coming from a can or powdered mix. They have my stamp of approval!

There are several German beers on tap and in bottles to choose from, and a small shop near the entrance where I picked up a few German culinary staples. 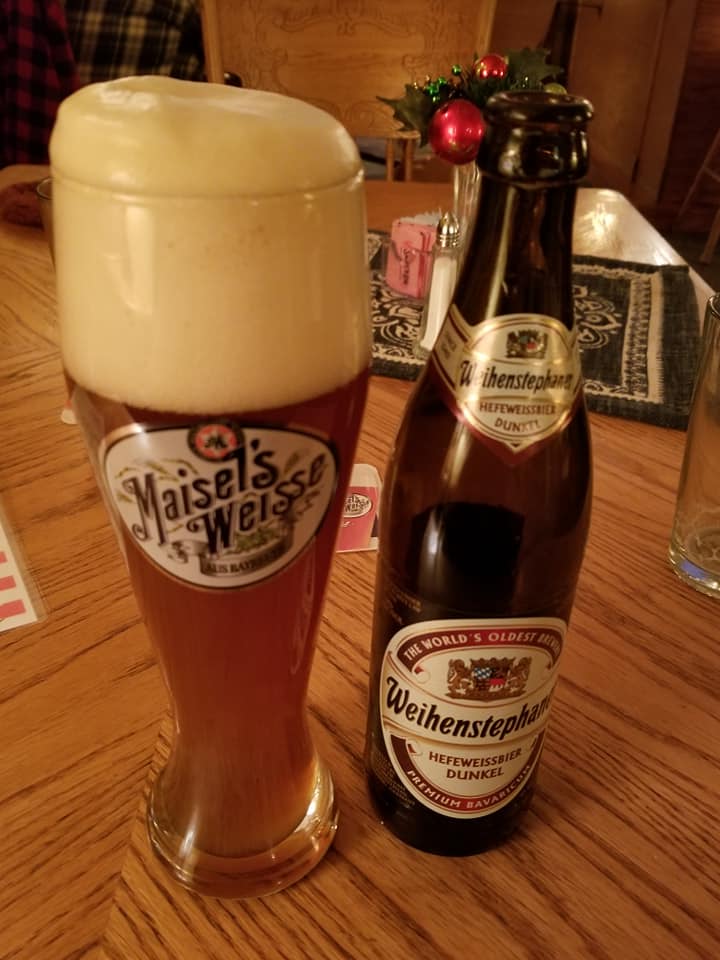 Worldly Wieners/Seven Sisters Taproom serves wings and appetizers, but they are most famous for their menu of various culturally themed all-beef brats.

Below is the Korean, topped with Korean bbq style beef, kimchi, and a fried over easy egg. Seven Sisters Taproom shares the dining room and has a taproom next door, but you can order beers from the table.

Veranda Cafe is a pretty typical Americana cafe with soups, sandwiches, and salads. Below is the Bavarian Pretzel Club with Black Forest ham, gouda, cripsy fried onions, and chipotle mustard from local company Lusty Monk. I buy this mustard on every opportunity that presents itself to me and it never disappoints.

One can only eat so much over the course of three separate day trips, but on my agenda for next time I plan to check out the Black Mountain Bistro, Black Bear Tavern, Blue Ridge Biscuit Co, and Foothills Butcher Bar.

There are several hopping (get it?) local breweries in Black Mountain including Lookout Brewing, Black Mountain Brewing, Pisgah Brewing, and if you prefer, Oak and Grist Distilling. 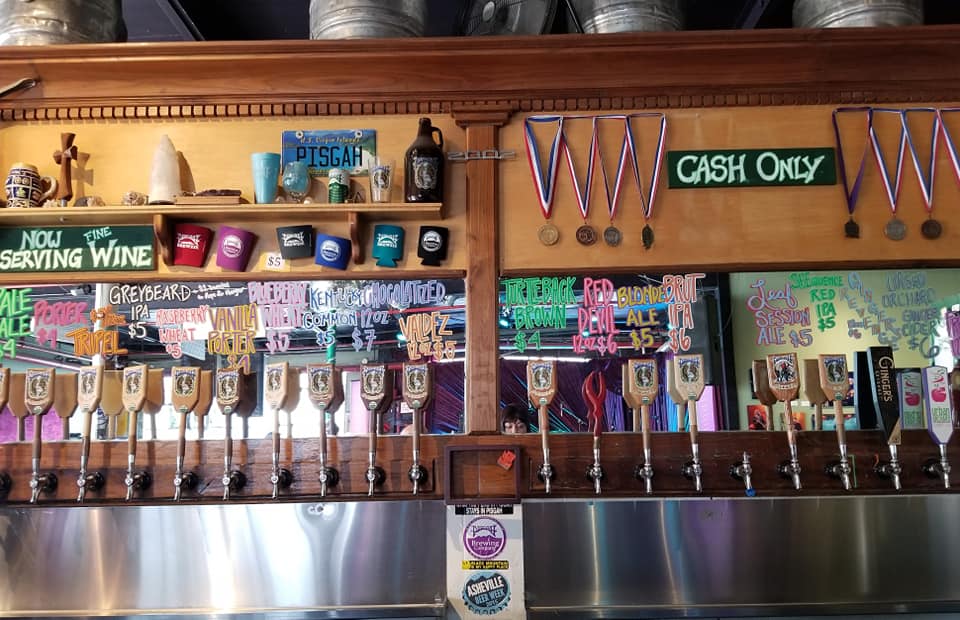 My friend and Black Mountain local took me to Pisgah Brewing Company to sample some of their brews and take a quick tour of the property which frequently hosts concerts and festivals.

They have a vibrant stage indoors and a large outdoor patio, and the beers were delish. 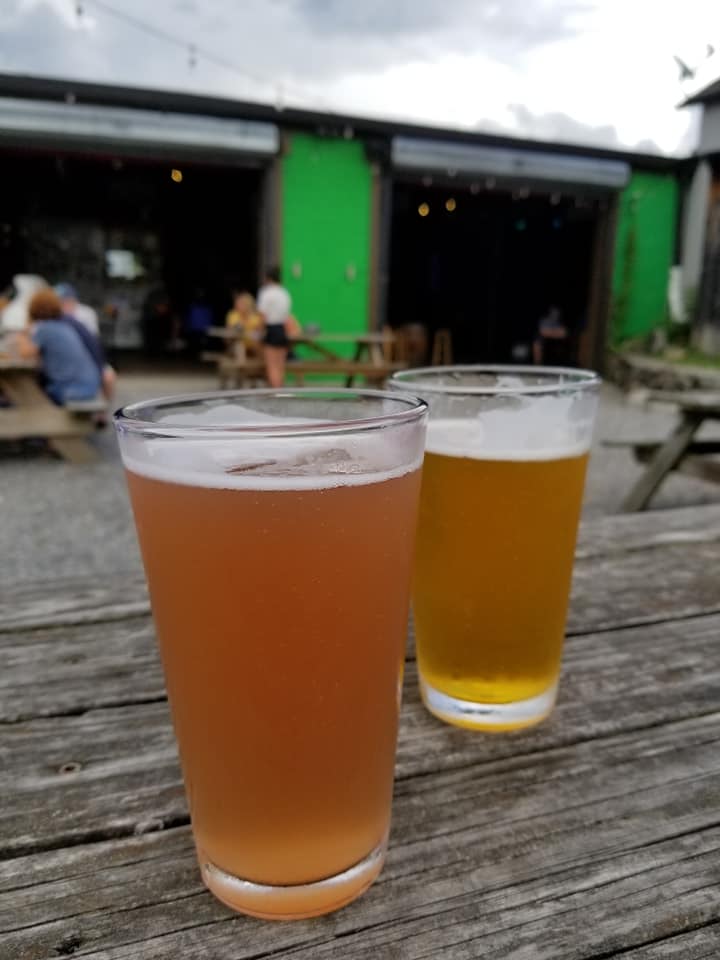 Black Mountain Brewing was fun on a solo date during a rainstorm, where some interesting conversations were struck up with strangers.

It was cozy enough inside and they encouraged me to sample everything before choosing.

If you have time and an empty stomach, be sure to visit the Black Mountain Ale House.

Town Pump is the local dive bar where bands and other acts can be found. My friend’s band has played there a few times and locals have told me it is the place to be after dark. 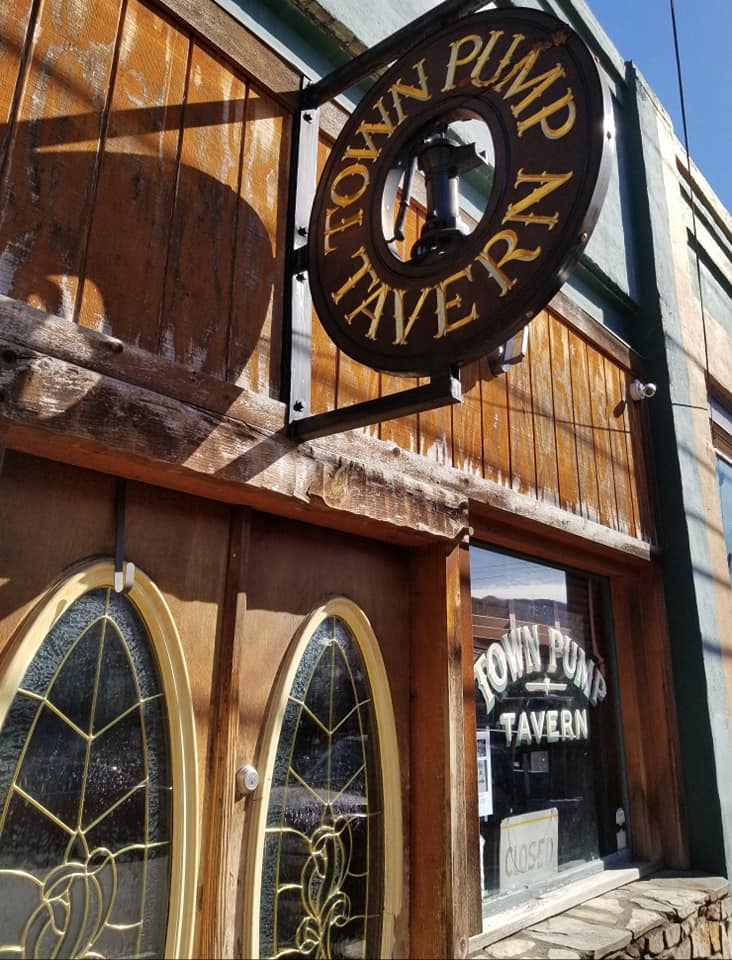 Black Mountain has a lot of funky shops with unexpected finds as well as culinary/spice shops. Spice It Up! has loose leaf tea and housemade spice blends. I was impressed to find several types of chai and Earl Grey beyond the standards.

The Merry Wine Market has a great selection of wines, gifts, mixers, and accessories.

I picked up an herbal tincture that was specifically crafted for making dirty martinis and look forward to trying it soon.

Mountain Towns always have the best music stores and Acoustic Corner is on point. You can also find Rickenbacker Violins and Song of the Wood in Black Mountain.

Seven Sisters Craft Gallery is packed with gifts, art, jewelry, pottery, housewares, and gifts made by local artists. This colourful piece is what lured me in:

The Curiosity Shoppe (no website) is a vintage boutique with lots of antiques, jewelry, Spirit supplies, and has a cute faerie garden outside.  It is in a small complex with a pet store and a few other businesses. 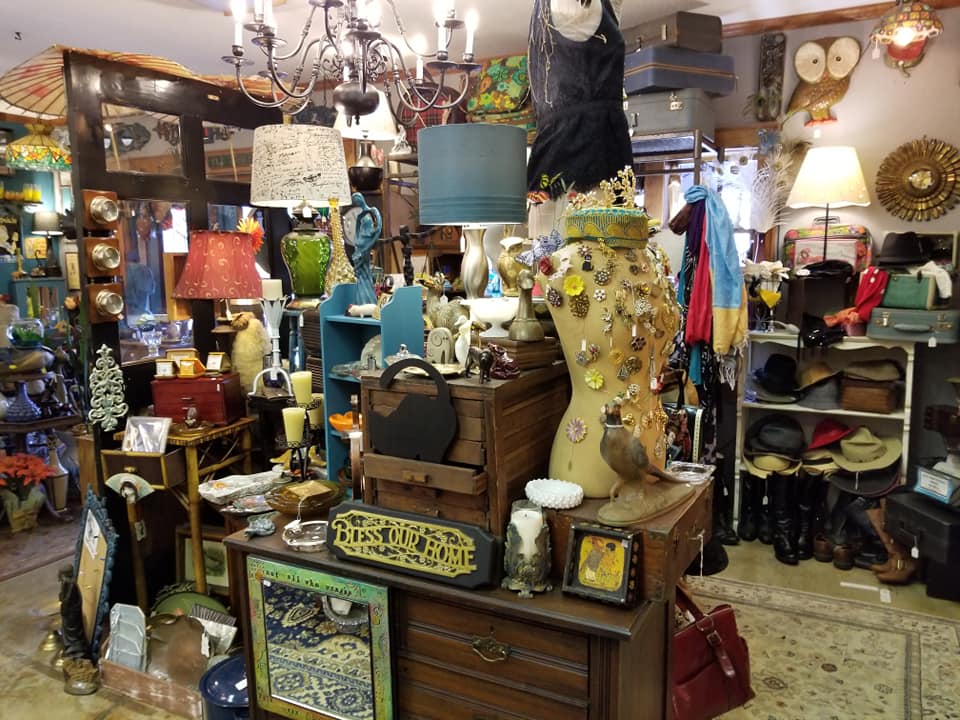 Europa is an adorable place with gifts from all over the world. I loved the colours and skillful designs of these Polish pottery pieces and Austrian decorated eggs. 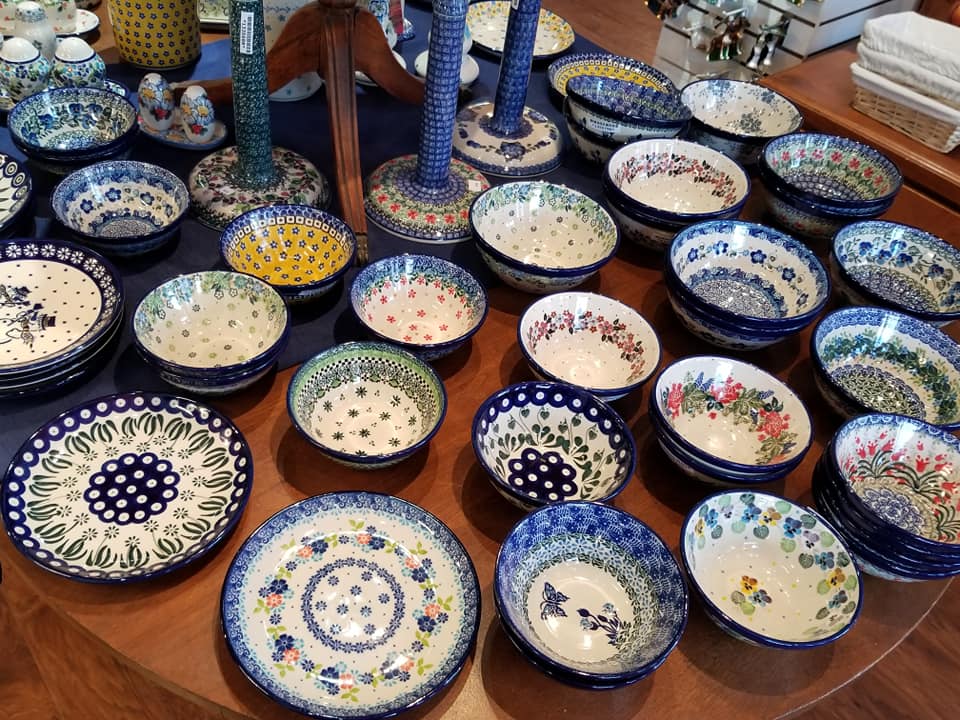 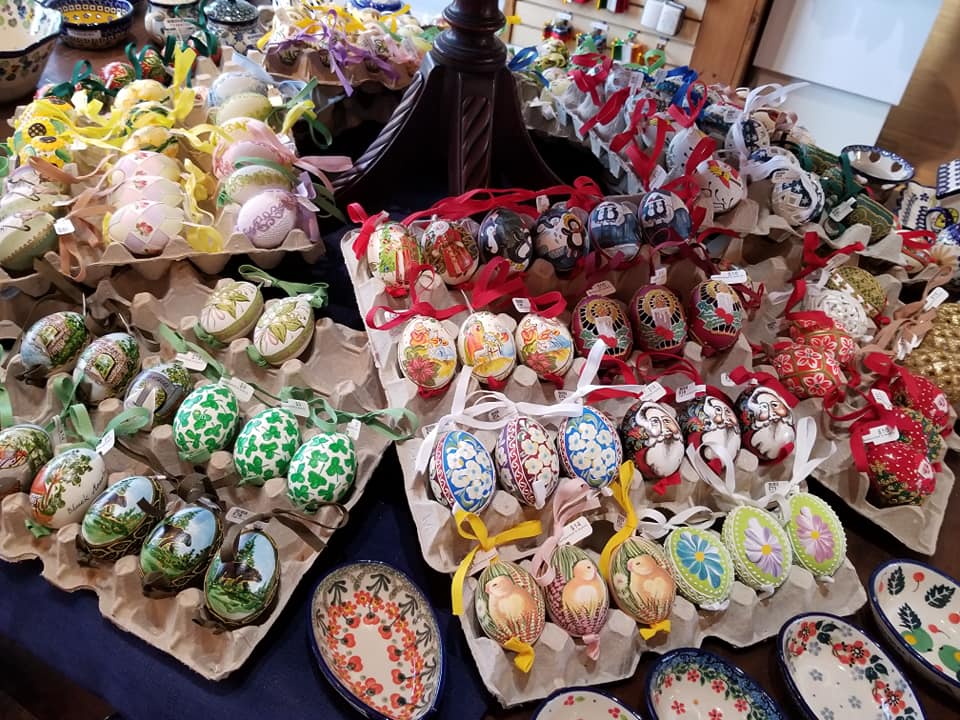 Town Hardware is more than a hardware store. They offer gifts, pet/farm supplies, home and garden, groceries, clothing, and more. It is so huge I can never catch a photo of the full building from ground level and you could get lost in there for a couple hours. 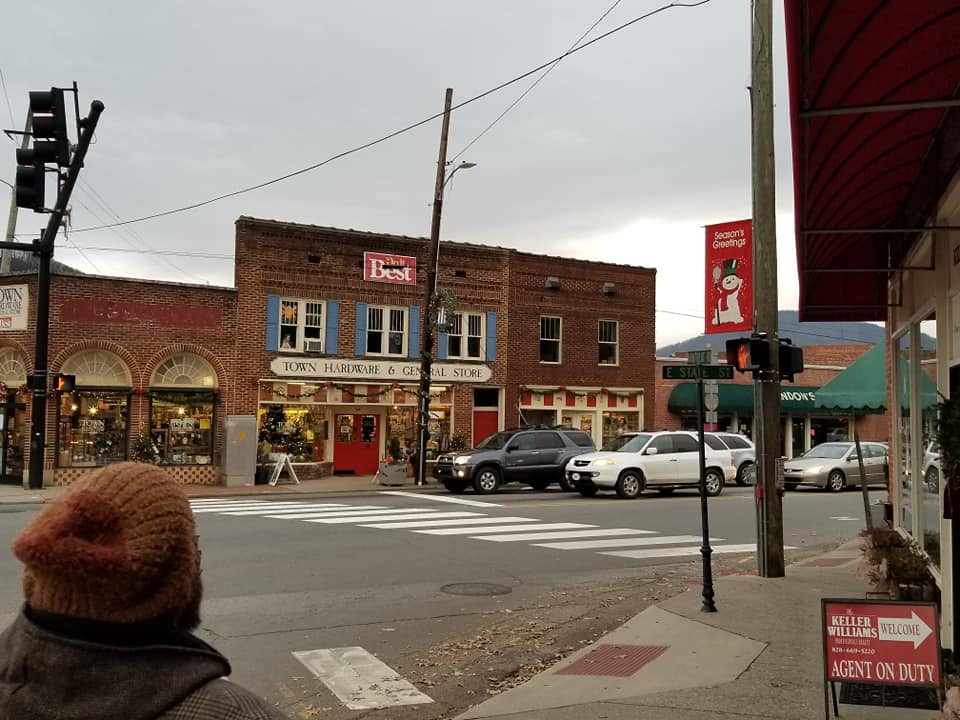 Outside of the town center, Lake Tomahawk‘s gorgeous mountain views and peaceful lake is one of the best parts of my visit(s) to Black Mountain.

The peaceful, quiet community of Montreat is just a few minutes away. Religion (especially the Billy Graham flavour) is definitely not my thing but Montreat is such a lovely place for a walk or picnic. Check out The Huckleberry Cafe right on the dam. 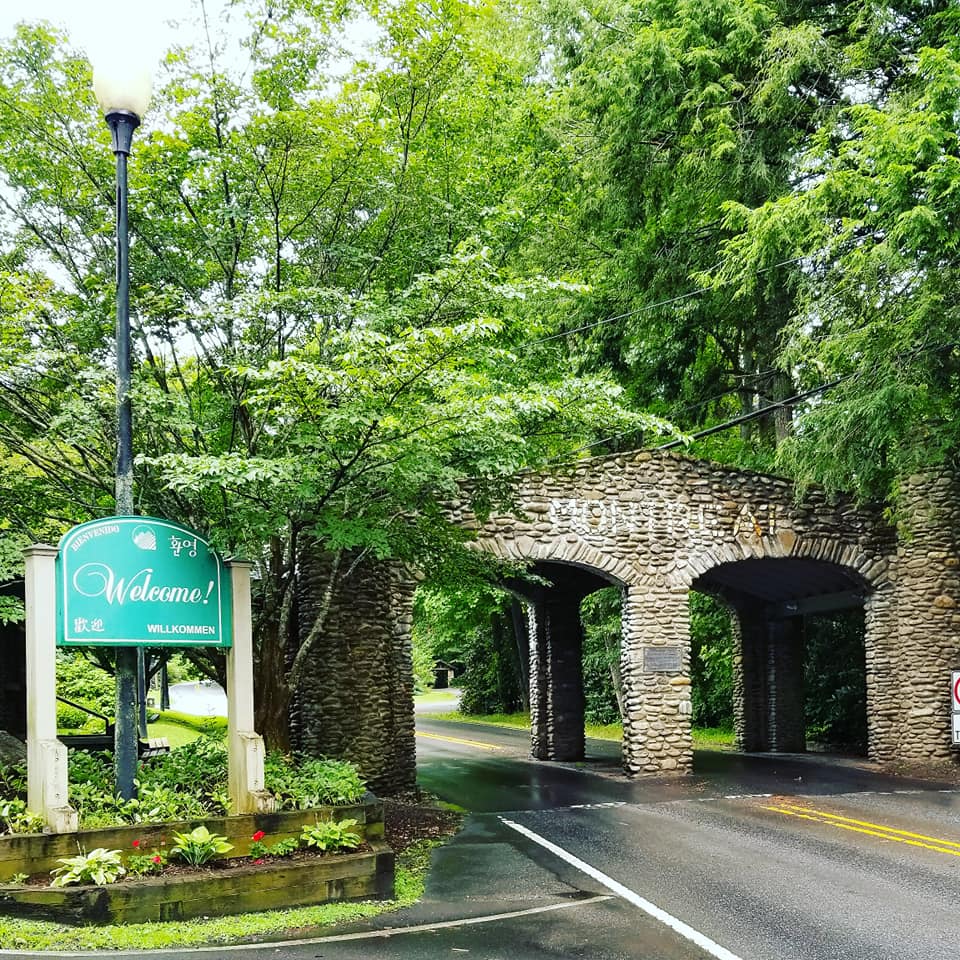 Last but not least, Mt Mitchell is the tallest mountain in the Eastern US, home of the Annual Black Mountain Marathon and Mount Mitchell Challenge. Runners start in Black Mountain, run to the peak of Mount Mitchell, then return.  A 40-mile race is held the last weekend of February and is considered one of the toughest races in the US.

I had to omit DOZENS of photos for the sake of readability on this blog, but that speaks for the abundance of places to go and things to do and see in Black Mountain.

2 thoughts on “Ride the White Horse Through Dark City”