Deep Ellum, an old-time vernacular twist on “Elm” Street, is Dallas’ most exciting district for live music, night life, art, and all things trendy with an edge.

Imagine a mash-up of Greenpoint Brooklyn, New Orleans’ French Quarter, and Atlanta’s Little Five Points, before L5P became so dilapidated that you could kick trash up like fall leaves.

The overall aesthetic here is gritty, loud, ultra urban, and full of attitude. Since the 1980s Deep Ellum has been a hub for punk rock and heavy metal gatherings, and the style prevails! 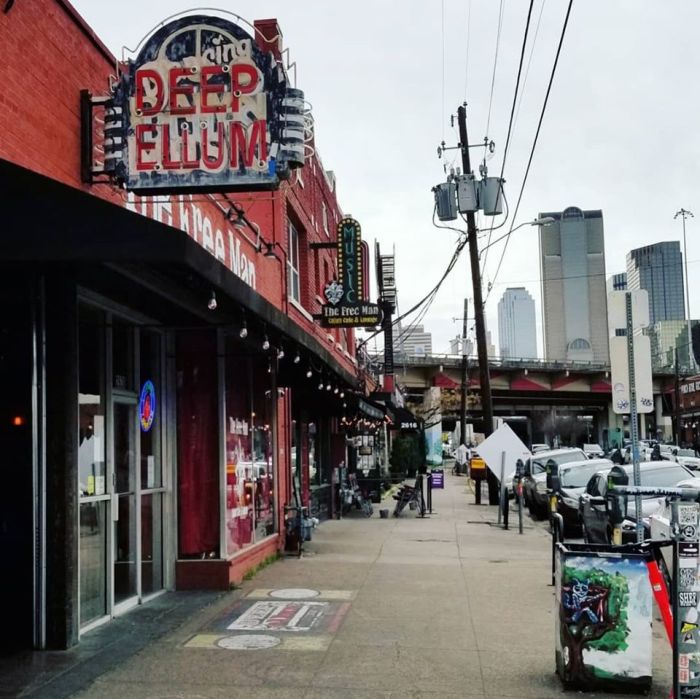 Below that though, is a layer of jazz, blues, funk, roots, and soul music, still heavy breathing under the developments of the last few decades.

After all, this is where Huddie “Ledbelly” Ledbetter and other blues greats such as Bessie Smith, Robert Johnson, and Blind Lemon Jefferson got their start.

My song for this entry is Ledbelly’s version of “Take This Hammer” in tribute to his fame here. More importantly, I chose this song as a tribute to the historical origins of this area.

In Ledbelly’s version of this song, he added certain vocal elements that mimicked sounds of workers swinging hammers that have become associated with chain-gang and slave songs.

Long after slavery was outlawed, many Blacks/African-Americans were still confined to work on railroads, and significant parts of Dallas started out as rail yards. Surrounding these yards, communities were established where “Free Men” made their homes after emancipation.

They were largely displaced when the city began construction of the highway, and the land was soon reclaimed as commercial and retail property.

The influence of Black/African American music and culture is undeniable here, and diversity is enthusiastically embraced. Jazz, Blues, and every other type of music flows out of each open door, and Deep Ellum’s history unravels in its art.

Deep Ellum has its share of manicured greens, festive signs, and tourist appeal as well. 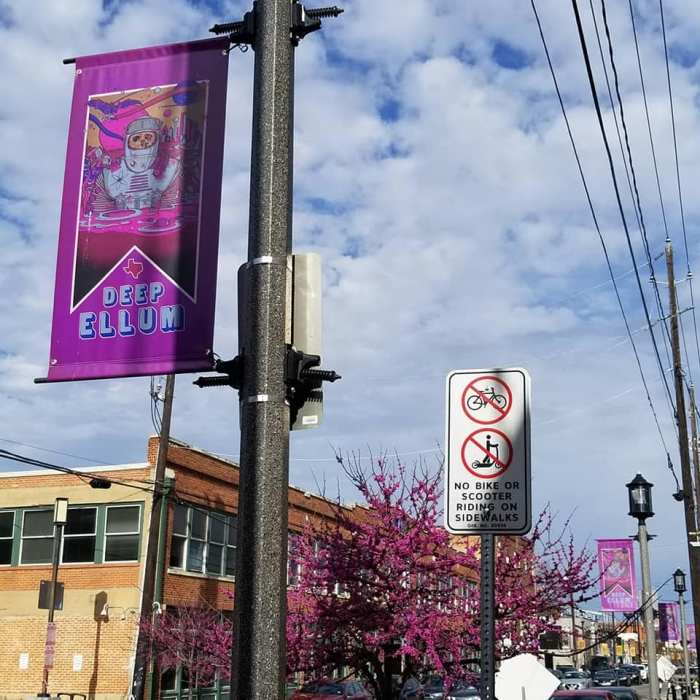 Parts of it are delightfully hippie and new age; peppered with yoga studios, some spirit shops and lots of eco-friendly spaces that have been cultivated with conscience.

In some ways, Deep Ellum shares similarities with the Bishop Arts District as far as being a Must-Visit while in Dallas. The district falls mostly within a grid structure of four streets- Elm, Main, Commerce, and Canton- between N. Good Latimer Expressway to the west and Hall Street to the east.

Just like Bishop Arts, it is packed full of murals and street art, but so intensely that there are countless apps and online guides to aid you in scavenger hunts and self-guided tours to visit each one. 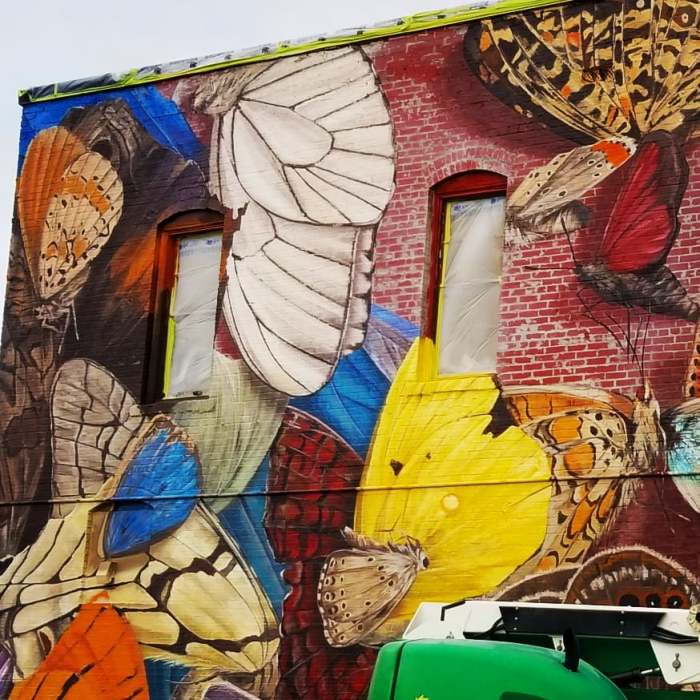 Here is one of the better Mural Walking Guides I found online, though I just kind of went with the flow while I was there. I came across some of the ones mentioned, and those which are part of the greater 42 Murals Project. 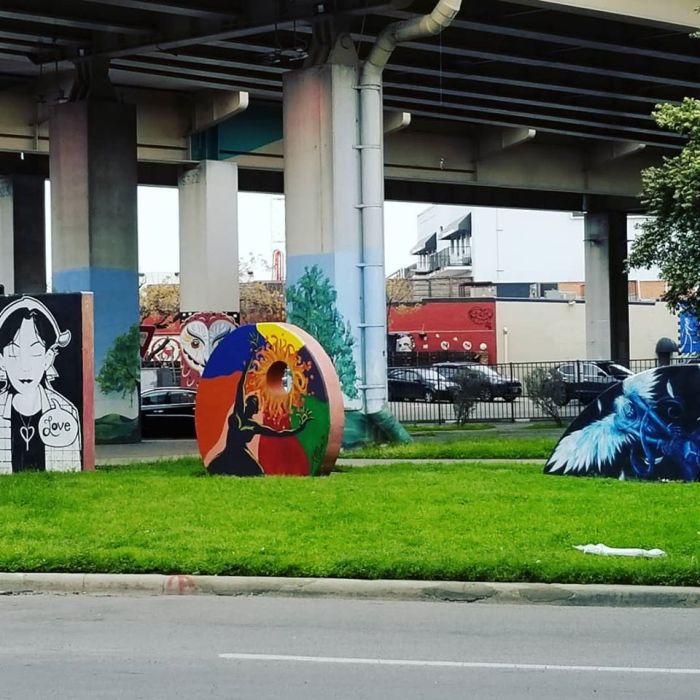 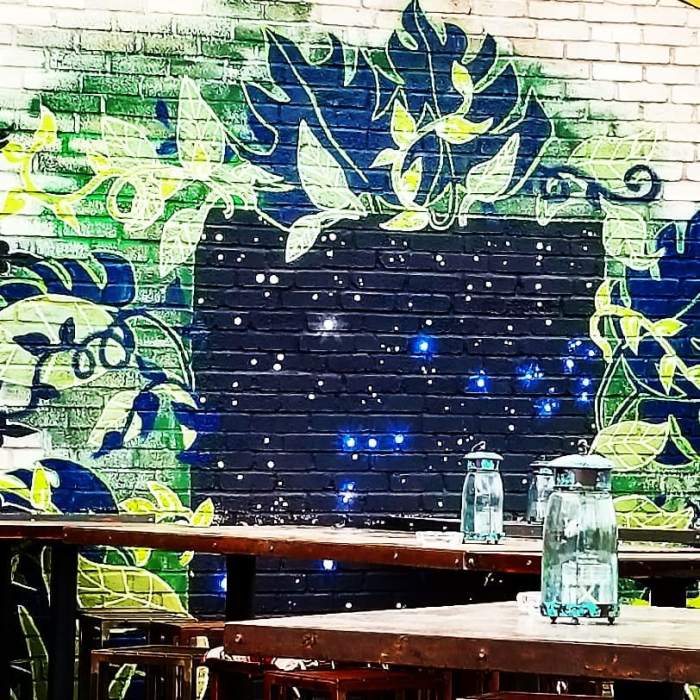 I was lucky enough to be in town the same weekend as the monthly Deep Ellum Outdoor Market  on Crowdus Street.

It takes place every third Saturday and has dozens of local artists/makers, food trucks, live bands, and a DJ. As I passed him, OS goth recognized OS goth. He nodded and started playing Bowie, and it’s in moments like those I believe I sometimes lead a very charmed life. 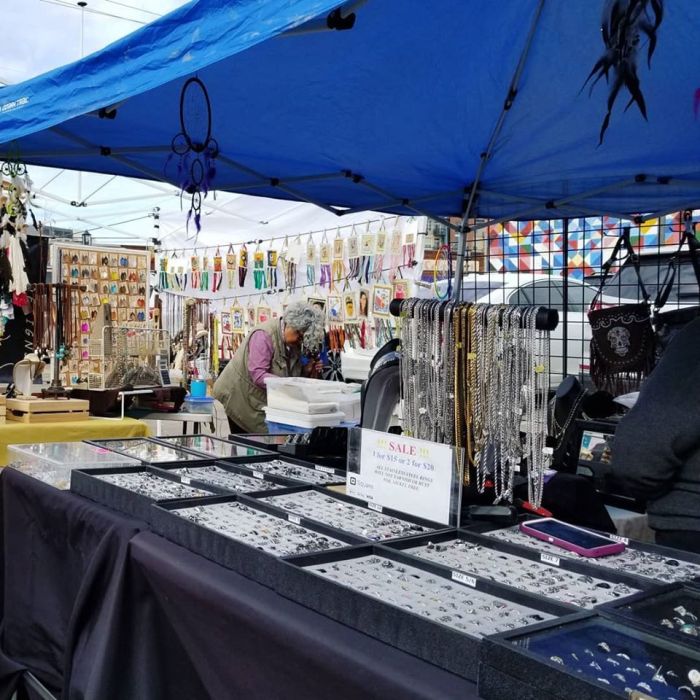 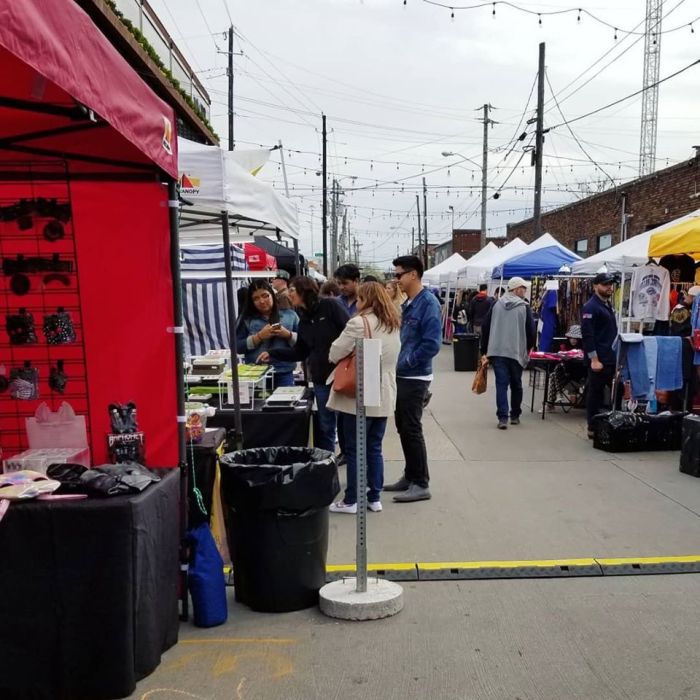 Outside the market, there are lots of awesome shops and bars like Club Dada, Dallas Pinup, and Heart in Hand Tattoos. 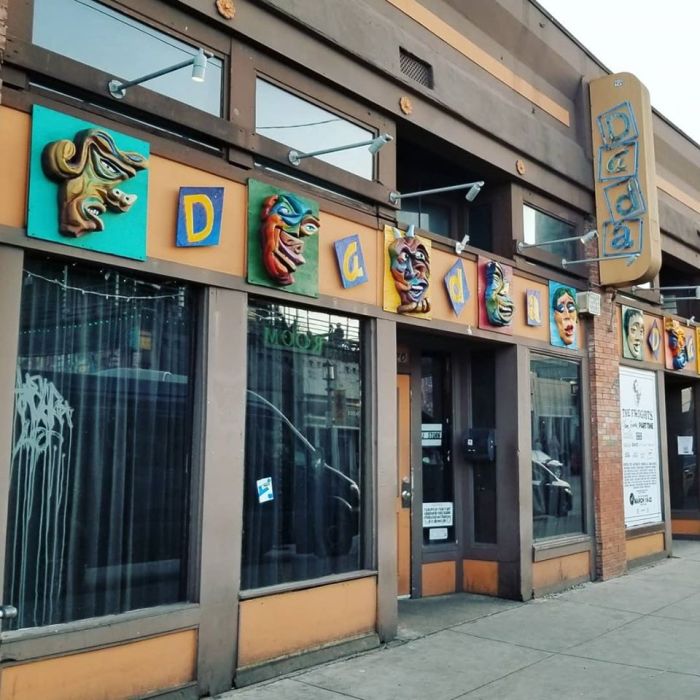 Serious Pizza caught my interest after seeing this man whirling a massive pizza dough above his head.  I stood in line for a while watching, but with at least 30 people ahead of me still, I decided to forfeit a slice and go to straight to my ultimate goal, Armoury DE.

Armoury DE was the only set-in-stone requirement for my day in Deep Ellum, though I had spent hours walking around before stopping in for dinner.

As many of you know from my Austro-Hungarian Mmmpire themed dinner posts, I have a huge place in my heart for old world European food, especially German, Hungarian, and Slavo-Balkan dishes. 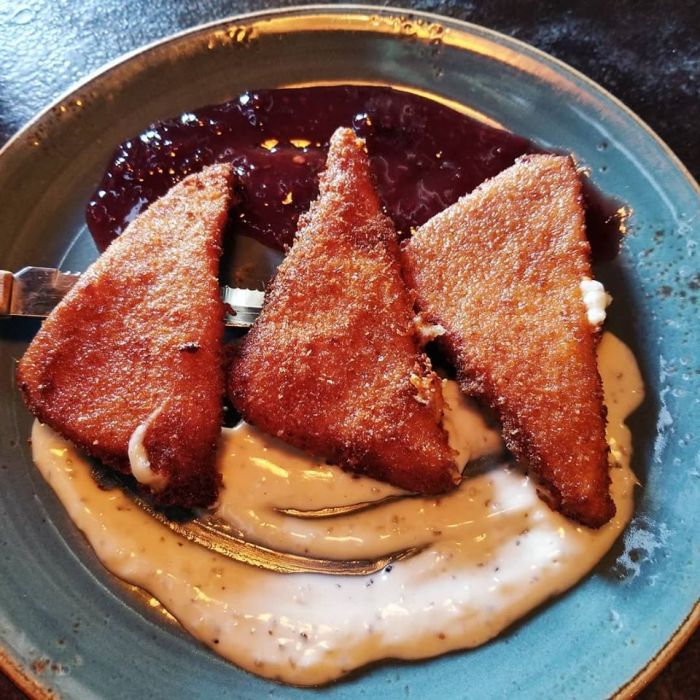 For the main course I had Mahra Pörkörlt (Hungarian beef stew made of paprika and veggies) with German Spätzle (pasta) and sour cream. It was everything I had dreamed of while stalking their menu online.

The atmosphere was cozy too. Kiváló, jól sikerült!

Crowdus Bar, aptly named for its prime location on Crowdus Street next to the site of the Deep Ellum Market, is a fun retro bar full of neon and nostalgia.

Their cocktails are more of the sweeter, artificially flavoured variety instead of classics like martinis and Old Fashioned, but I get it. Stick with the theme and all. 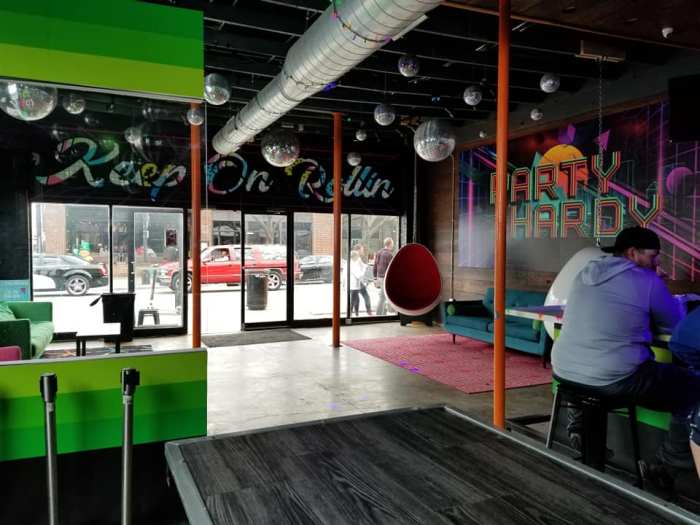 BrainDead Brewing is an awesome brewery with fantastic beer names, a wrap-around elevated patio, large table settings, and great views of the district.

This is a great spot for more mural spotting, as there are several inside and on the exterior.

Deep Ellum Brewing is the golden child bar of the district, and they even have a special seltzer named Blind Lemon.

I like their outdoor set up with live music. This place has a more conventional crowd with bocce games, khakis, sports clothing, etc. and everyone was super friendly. 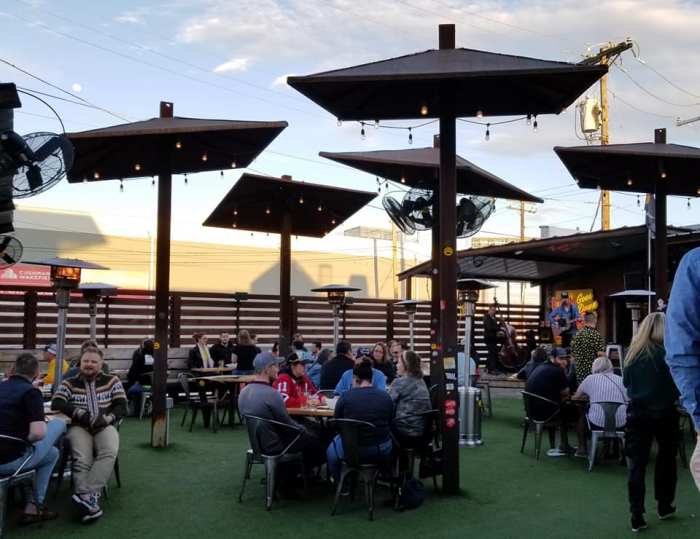 However, I found my true fit at Three Links, a punk rock bar and venue. I sat and chatted with the owner for an extended amount of time and she told me I MUST stay for some of their punk karaoke party with a live backing band 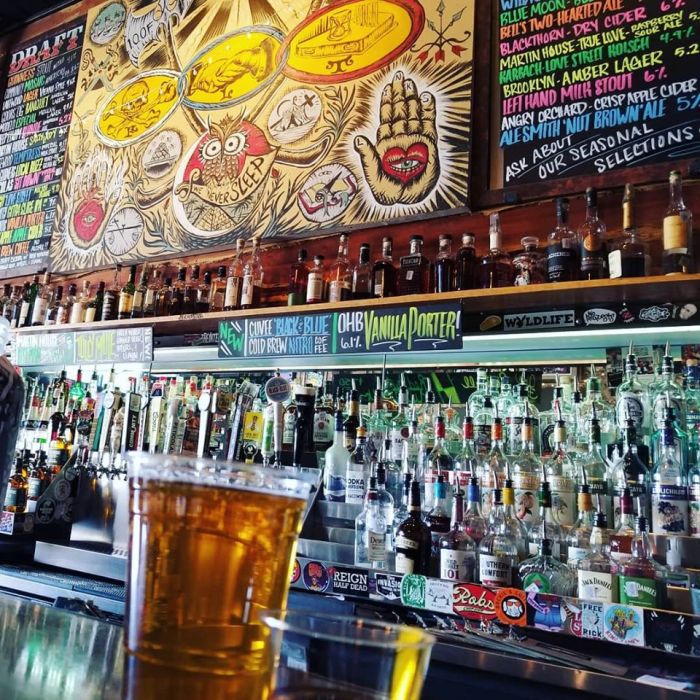 She also talked me into their “Buy any local brew and get a shot of whiskey for just fifty cents” special. Whew! This place is a blast. I love their stage set up and style, and this would absolutely be my bar of choice if I lived in Dallas. 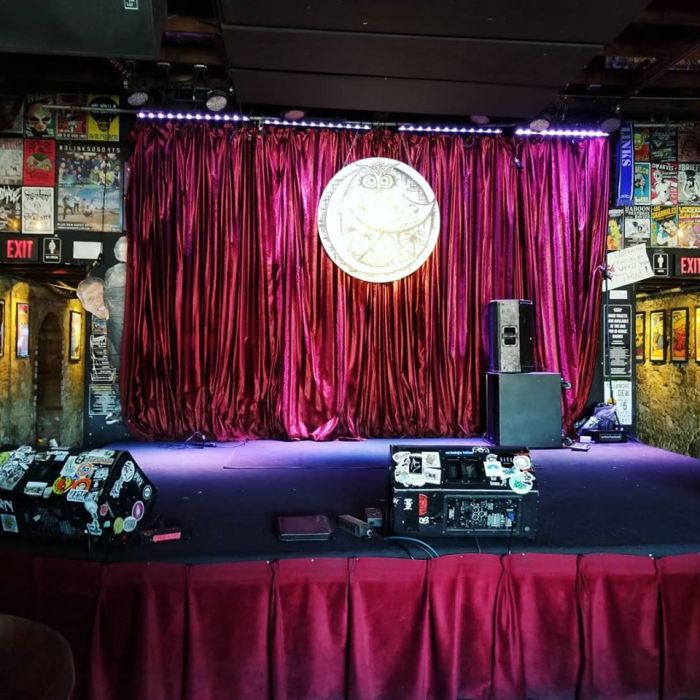 I stopped by Anvil Bar (not pictured), but after the ninth thing I asked for on their menu that they said they did not have anymore, the bartender offered me a Bud or a Miller. Nope.

I wandered around a bit until I found a metal show at Wits End.

I was too tired to ride out the whole night, but the bands were Vale of Pnath and Gorod, which I have since been listening to.

Deep Ellum just kept getting better the longer I stayed. I look forward to revisiting and writing additional blogs in the future. What are your favourite places in Deep Ellum?

Oh, and here is another bonus:
I fell into a very deep rabbit hole looking up different versions of “Take This Hammer” which went by a multitude of other names and was reimagined by people of all different cultures. It seems to have really taken off the most in Germany with titles such as “Nimm den Hammer” by Ton Steine Scherben, German band the Ragged Men, and “Ich Will Frei Sein” (I Want to be Free) by 1960s Austrian/German-speaking rocker Udo Janson. Wow.

In town for a few days? Don’t miss out on a trip to the Bishop Arts District.
And don’t forget to subscribe!

3 thoughts on “Throwing Down in Deep Ellum”