Uptown is a glitzy newer neighbourhood in Dallas, freshly made up of the lower parts of other neighbourhoods closest to downtown. It was created and named solely to attract real estate developers to revitalize it, plowing over all the real culture and leaving this new creature with the natural historical richness of swimming pool.

That being said, I liked it.

My song for this entry is “(Everbody’s Going) Uptown” by Prince.

Two of Dallas’ best museums are the Perot Museum of Nature & Science and the Dallas Museum of Art (DMA). Both are ambiguously considered Downtown and Uptown, I assume to lend some culture cred to Uptown.

The museums are less than half a mile from each other, and the DMA is directly across the street from Klyde Warren Park which is basically the Downtown-Uptown portal.

The Perot Museum of Nature and Science looks like something from Ripley’s, with a “falling” diagonal glass case juxtaposed against some wildly textured sandstone type exterior.

According to the greeter and the website, the museum is a result of an incredible merge of collections and entities of the Dallas Museum of Natural History, The Science Place, and the Dallas Children’s Museum back in 2006. The children of Ross Perot donated over 50 Million dollars to this project so the museum is named after their family.

Inside, visitors take three long escalators to reach the top, the recommended starting point, with the third escalator sending you straight toward a T-Rex’s jaws.

The highest floor has a nice collection of prehistoric skeletons and artifacts, as well as an Aviary exhibit.

Another floor is all about humans, hominids, evolution, various theories, and lab sciences. It was my favourite exhibit, being an Anthro major. I was thrilled to see so many images of Ardi (Ardipithecus ramidus, my spirit guide) in one place.

There were also countless exhibits on the natural world, topography, meteorology, environmental disasters and simulators, gems and crystals, etc.

My main objective there was to see the traveling special event Origins: Fossils from the Cradle of Humankind, highlighting the discovery of Australopithecus sediba and Homo naledi specimens. You could easily spend the whole day fully-immersed here, but I managed to speed-check out most of it in about three hours.

The Dallas Museum of Art was established in 1903 and has free general admission. It is in the top 10 largest art museums in the USA and has multiple extensive, growing collections.

A few of my favourite pieces are below:

Photo of Pablo Picasso’s The Guitarist, 1965

When I was a teenager I fell in love with Fernand Leger as a filmmaker, specifically for his 1924 piece, Le Ballet Mecanique that features one of my favourite French icons of the time, Kiki de Montparnasse.

Seeing some of Leger’s paintings was a joyous surprise.

I was also able to see the beginning stages of the upcoming exhibit called For A Dreamer Of Houses.

Leaving the DMA, I crossed the street and strolled through Klyde Warren Park. I had been past it a few times already and noticed there are usually several food trucks which rotate daily.

To walk into Uptown from here, follow N. Pearl Street to Cedar Springs Road and it will take you through the Pearl neighbourhood of Uptown. This route takes you past the Shake Shack, the Tipsy Alchemist, Concrete Cowboy, Clutch Bar, Level, Katy Trail Ice House, and other hot spots in less than a mile.

My friend/coworker is a former Dallas resident, and he suggested I venture out to the Katy Trail Ice House. He was on point.

There is a 50-feet long bar inside and they have an extensive menu of ice cold local brews and bites.

The Katy Trail train caboose sits outside the entrance of the Ice House, doubling as one of the main access point markers of the actual Katy Trail.

As with many parts of Dallas, this area was once an old rail yard. Union Pacific’s Missouri-Kansas-Texas route, known as K-T or the Katy route, ran right through here. UP donated the land to the city in the 1990s and within a few years, residents had funneled their resources and efforts into creating the trail and making it what it is today.

The Katy Trail is a 3.5 mile walking/biking path and park that takes visitors through a guided maze of local landmarks and other community staples. Large groups of bikers and joggers meet here before and after outings, and it can be a mad house during marathons.

Sadly I did not get to see each one of the Uptown neighbourhoods before returning downtown for evening plans.

I can say that there are other cool spots like the Kung Fu Saloon barcade, Magnolia Theater, the MUTTS Canine Cantina/dog park, the Museum of Geometric and MADI Art, and the McKinney Avenue Contemporary Visual Arts Organization.

Victory Park, the most dazzling revitalized former rail yard, is where all the glam and high fashion retailers, high rises, and massive churches are.

Cole Park, Griggs Park, Turtle Creek Park, and Reverchon Park all lead to or alongside of the Katy Trail. McKinney and Greenville are also some of Dallas’ most notorious barhopping streets.

Heeding a local friend’s suggestion, I went to The Rustic for lunch. It was about a mile or so from Katy Trail Ice House, but it was a nice day and I had plenty of time.

Walking also gave me a chance to see what else the area has to offer in terms of services, fancy cocktail lounges, dog spas, and more.

The Rustic is in the West Village neighbourhood of Uptown, known for its plethora of restaurants including street food, upscale, and worldwide cuisines that fuel its famous West Village Food Tour industry.

The Rustic in particular has a special claim to fame here because they are one of a few, if not the only, steady live music venues in Uptown. Outside is a Texas-sized patio and stage; inside is spacious and full of light.

I decided on the green chile brisket burger with elote salad.

Another cool thing about Uptown is that residents all have access to the free M-Line, which takes them into other parts of Dallas. It has been running historic streetcars since the late 80s and is operated by the McKinney Avenue Transit Authority.

One of the fancy stations is right outside the Rustic and it looks rather Futuristic. 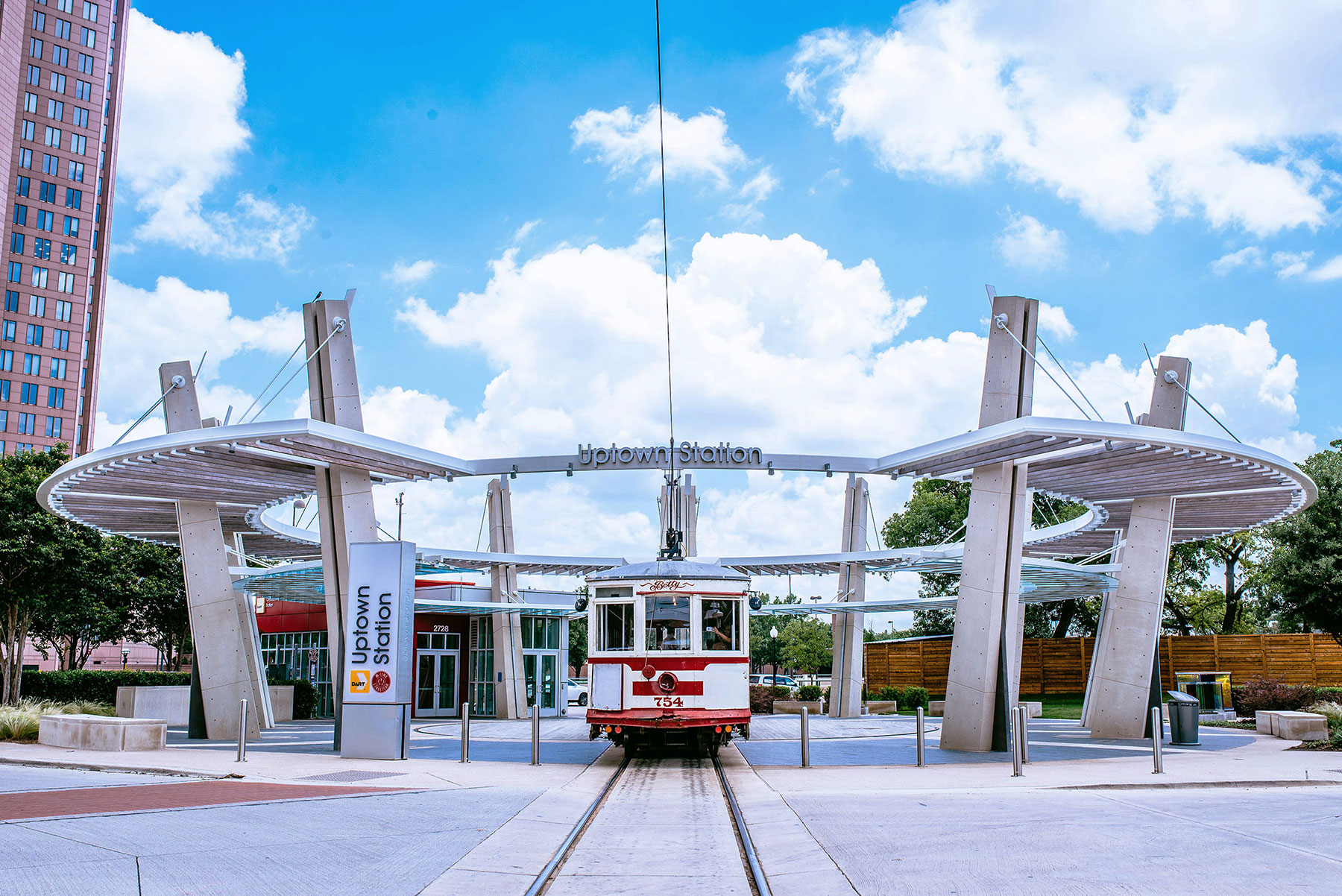 Living here would be a great comfort for those having to navigate the massive and nerve-wracking Dallas metropolis for work each day. Uptown is clean, quiet, accommodating, and everything you might need is within reach. It is a bit cookie cutter with all the office towers and matching store fronts but in all seriousness, Uptown is a nice place.

In Dallas for a while? Don’t miss out on excellent food and partying in the  Deep Ellum District. And don’t forget to subscribe!

One thought on “Everybody’s Going Uptown in Dallas”