After a whirlwind trip through the Florida Keys and Key West, we set out for even more adventure in the Everglades National Park. Most visitors head straight to 75/Alligator Alley, but we opted to peruse the odd collection of attractions along 41/Tamiami Trail.

Tamiami Trail runs through the Everglades and the Big Cypress National Reserve, from Tampa all the way to Miami. Locals sometimes call it Old Alligator Alley to differentiate it from the newer and more popular 75/Alligator Alley further north. Both routes are bordered by reptile-filled swamps, towering trees, and big blue sky.

My song for this blog is “Song of the Swamp” by the Duke Ellington Orchestra.

Back on mainland Florida, we had an insanely decadent breakfast of maduros, croqetas, pastries, and Cafe con Leche from Cuba Bakery in Homestead. We then popped by the Miccosukee Resort & Gaming Casino.

I am not into gambling or gaming, but in this empty room of neon lights, I began having flashbacks of nights spent dancing and toasting with friends before we all two-stepped into quarantine. The relatively small number people inside the casino were somber, distanced, and wearing masks like us.

What a time to be alive. 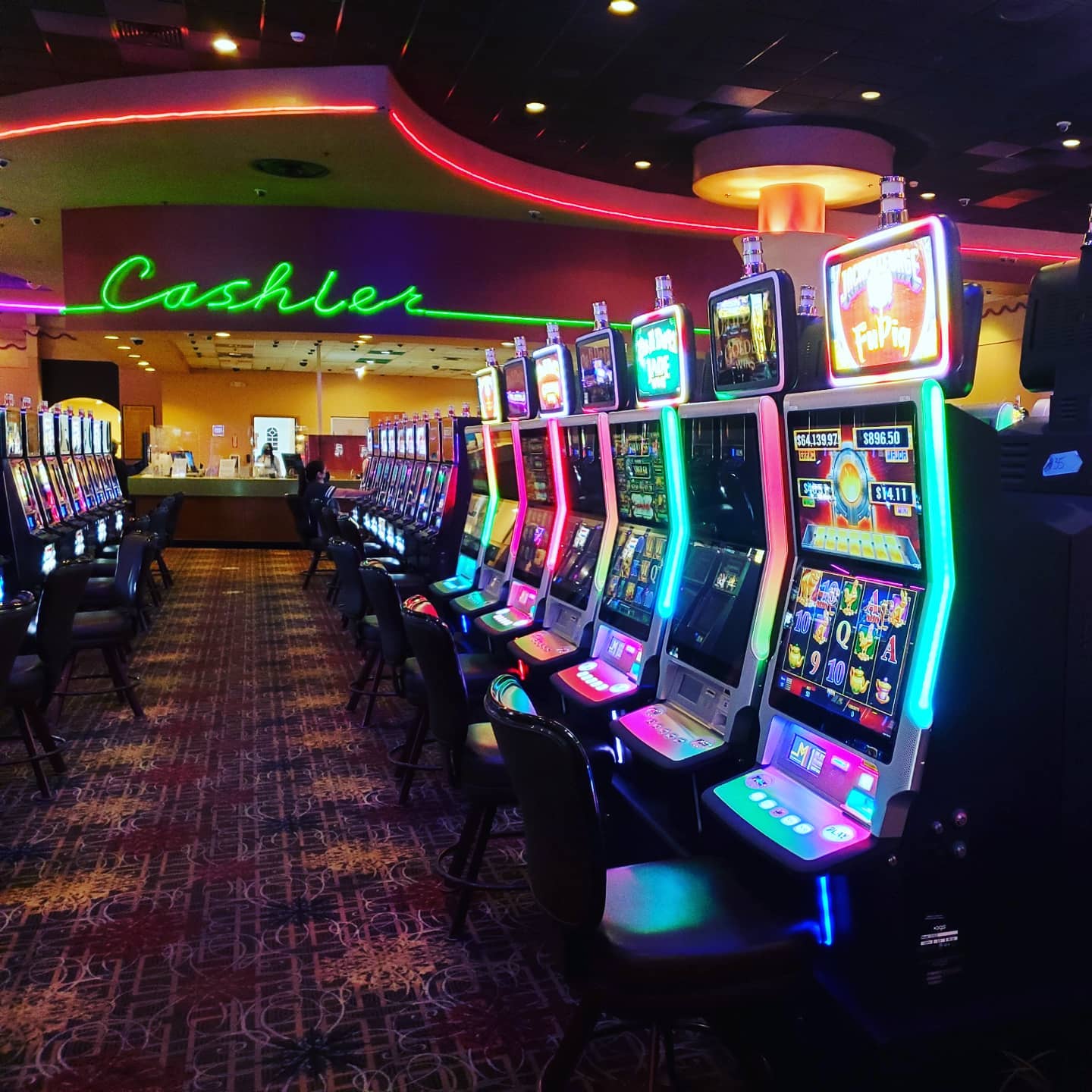 The Miccosukee Tribe are a branch of Creek and Seminole Indians who escaped to Florida in the 1800s when Native Americans were forcefully moved West.

They hid out in the Everglades for more than a century before they were inevitably forced to interact with outsiders. Primarily, this began in the late 1920s when the Tamiami Trail was paved over their settlements.

The Everglades National Park was formed in the 1947 but was largely untouched during the first two decades. When an airline attempted to buy the land and turn it into an airport/jetport, Miccosukee and Seminole tribes joined forces with environmental protection agencies to protect these sacred grounds. 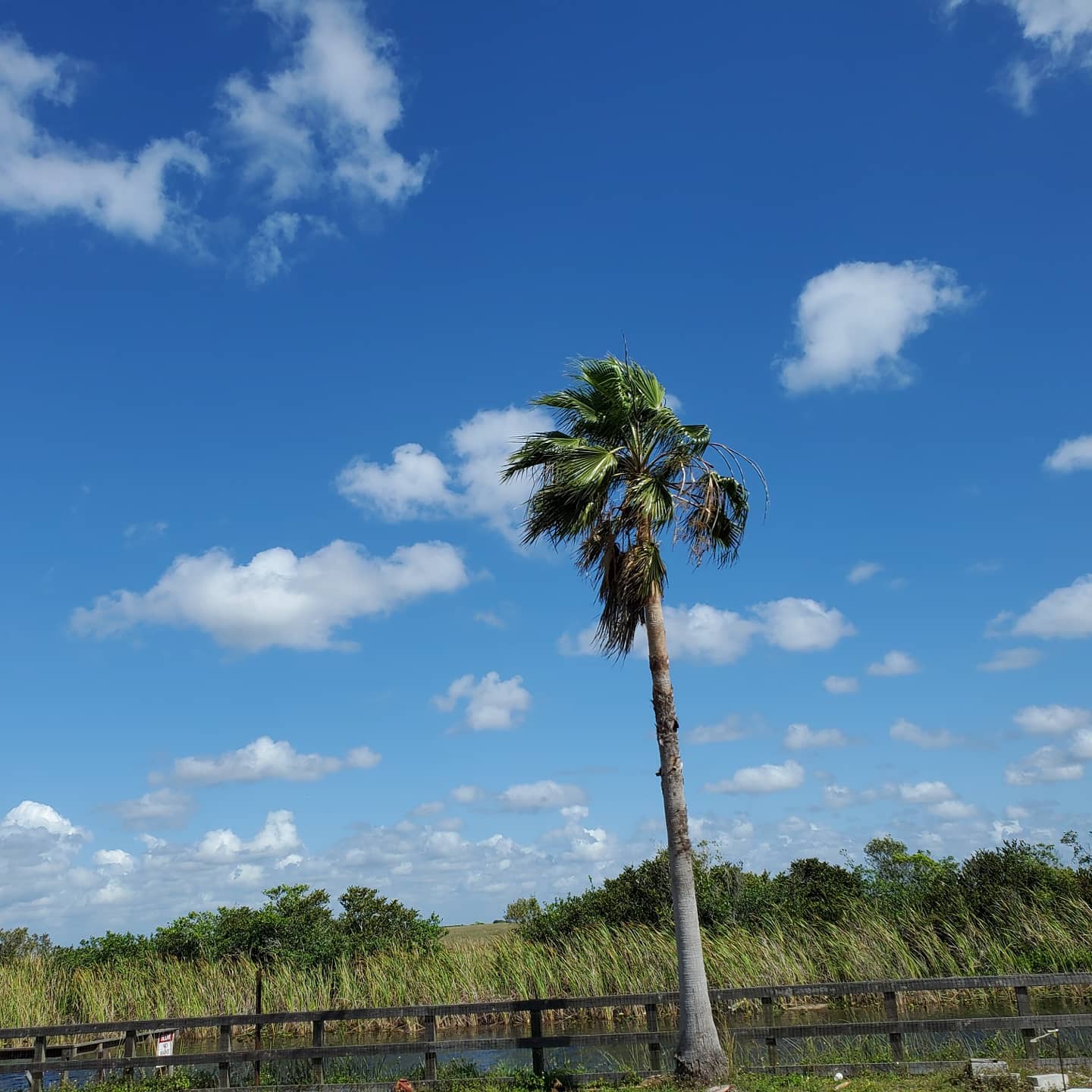 Meanwhile, the Miccosukee sought help from Fidel Castro in appealing to the United States Government for recognition and protections as a sovereign, autonomous territory and people. By reaching out to Cuban leaders, the shameful history of how colonists treated Native Americans began to spread abroad and the desire to extinguish this wildfire put pressure on US officials to act quickly.

Once sovereignty was granted, the Big Cypress National Reserve was established in 1974. This reserve is a freshwater swamp ecosystem with nearly 730,000 acres and was the first national preserve in the US. Now it is also home to endangered Florida panthers in the Florida Panther National Wildlife Refuge. 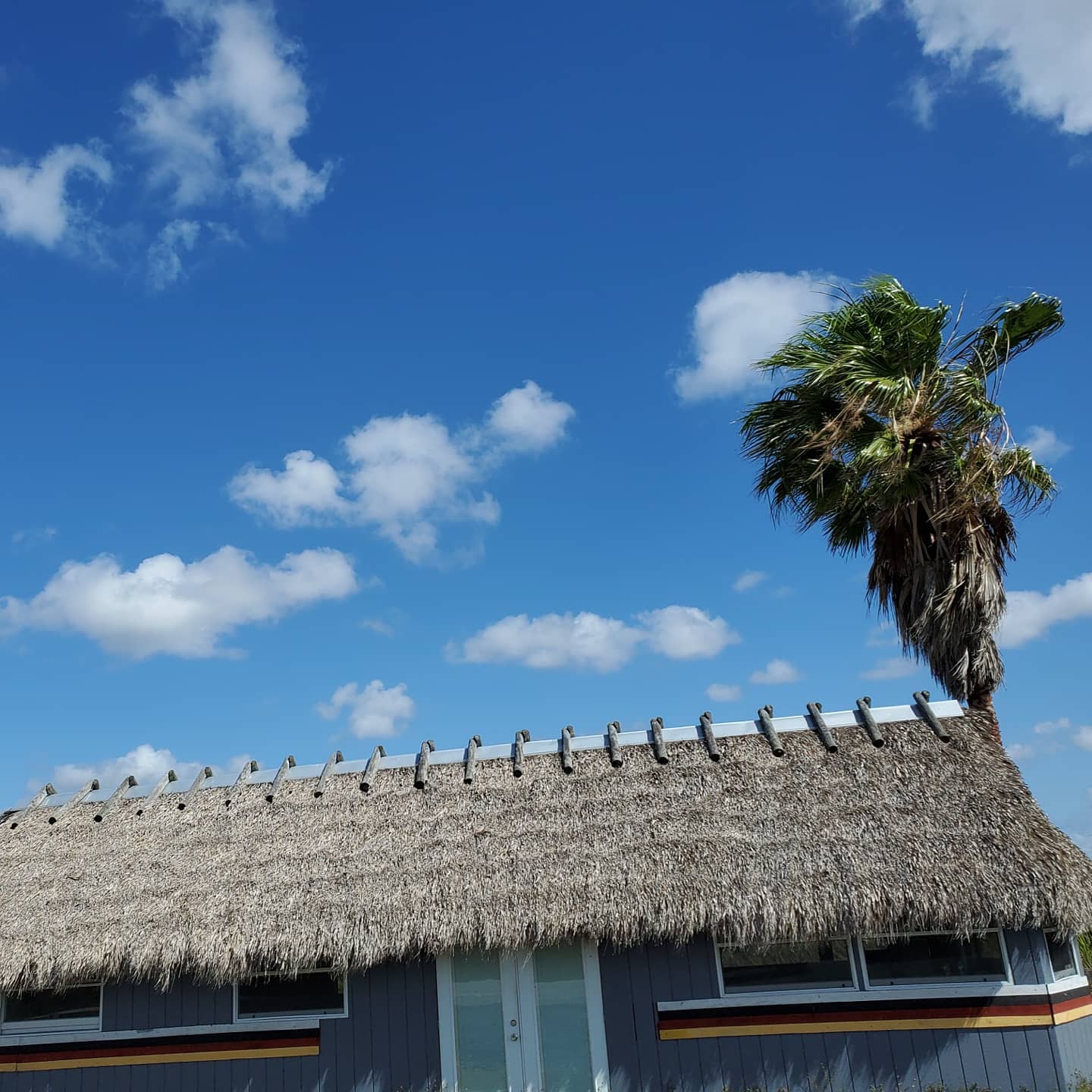 The Miccosukee developed medical, educational, municipal, and economic institutions as well as the casino, a village, and a museum that are open the public. Funds from tourist activity help support the Miccosukee Reservation which has become synonymous with the Big Cypress National Reserve.

Miccosukee’s trademark band of white, black, red, and yellow can be found on everything within and on the boundary of the village. 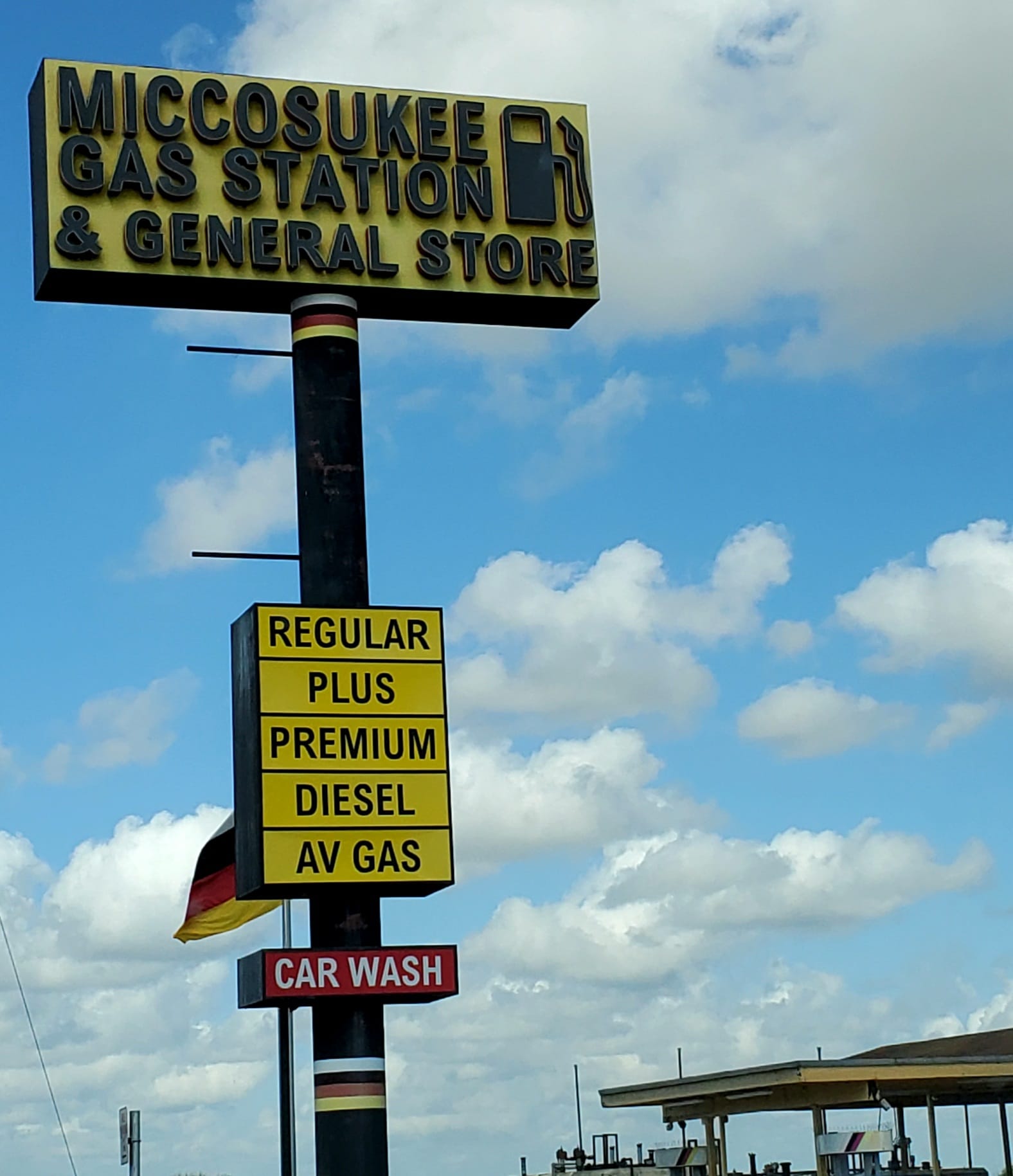 One of the most unique facts about the Everglades National Park is that it is the only known place in the world where alligators and crocodiles exist in the same natural habitat. This is largely due to the abundance of freshwater swamp acreage, a preference shared by both animals.

Freshwater from the Everglades feeds into the area’s primary water sources and in drier months, the Everglades suffer drought. The dry grasses and trees catch fire, displacing inhabitants and compromising their health and safety. The Everglades Foundation is just one agency committed to conservation of the Everglades and they offer educational programs, outreaches, and hands-on events to help maintain it.

The Everglades also refer to this general region of Florida, and it has been awarded many prestigious titles including its status as a World Heritage Site, Wetland of International Importance, International Biosphere Reserve, and Largest Subtropical Wilderness in the USA. Check out the Everglades National Park’s official channel on YouTube to see why. 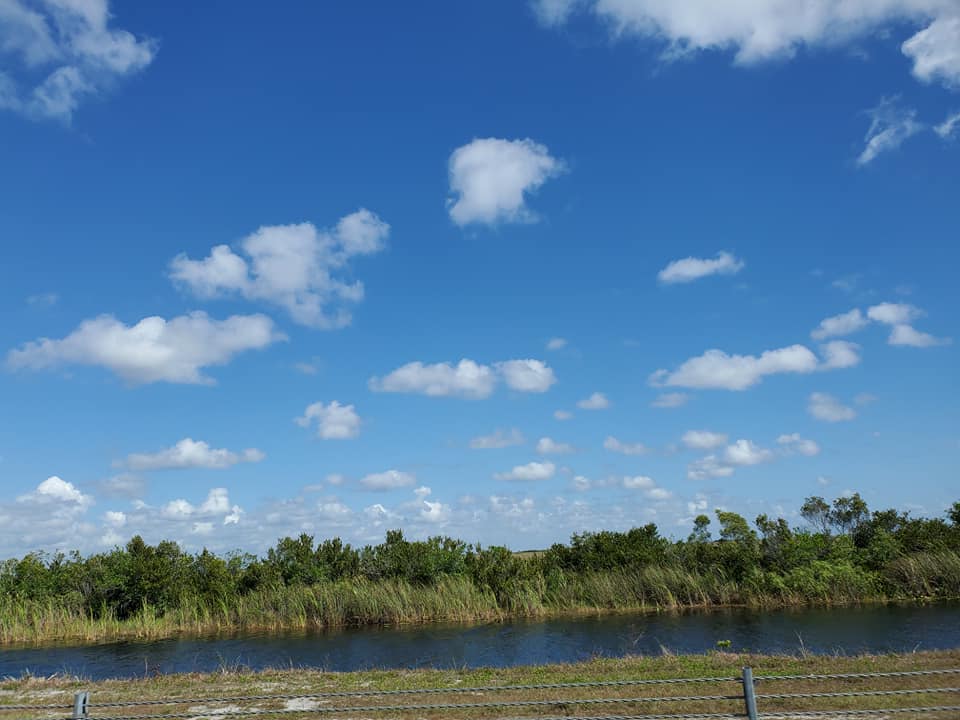 Butcher has been formally invited to Cuba and Spain to photograph geographical wonders for their respective national galleries. He has received countless awards for his work as an artist, humanitarian, and conservationist. Just look at this list!

Inside his gallery you can learn about the technical processes Butcher uses, see his special silver gelatin printing paper, and some of the old pinhole cameras he has made and used over the years. 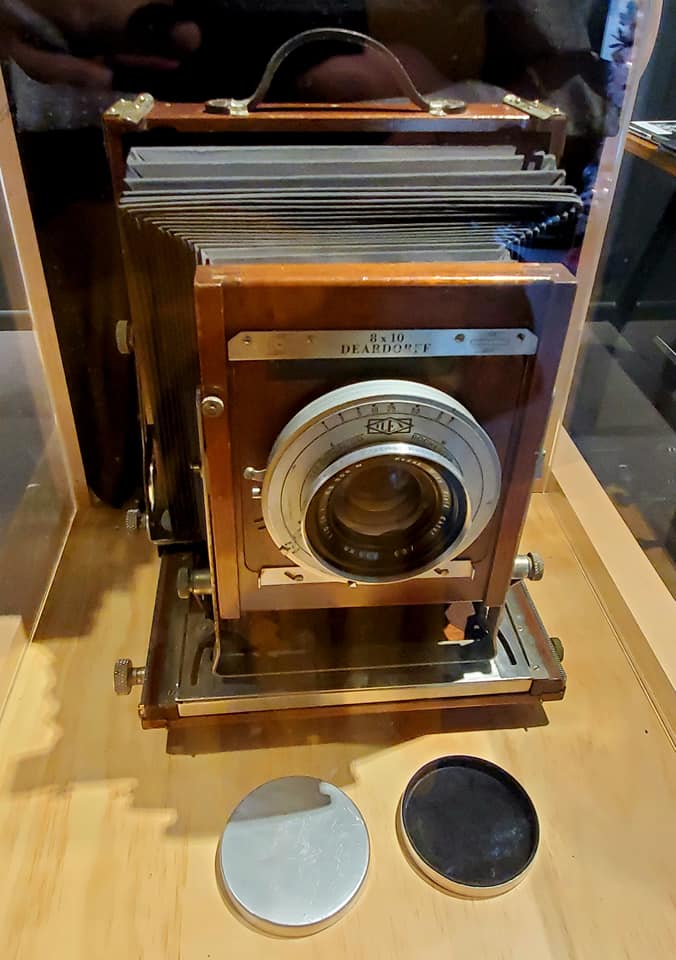 Admire his most famous works up close and purchase prints, books, or other merchandise. 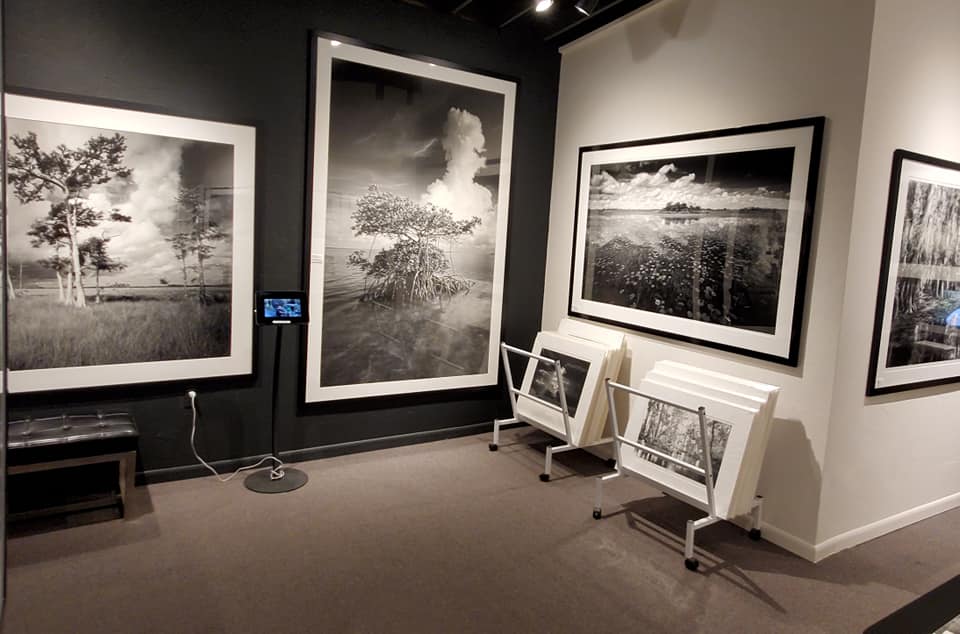 His “Gaskin Bay” photo below shows one of the many Cypress trees that started it all. 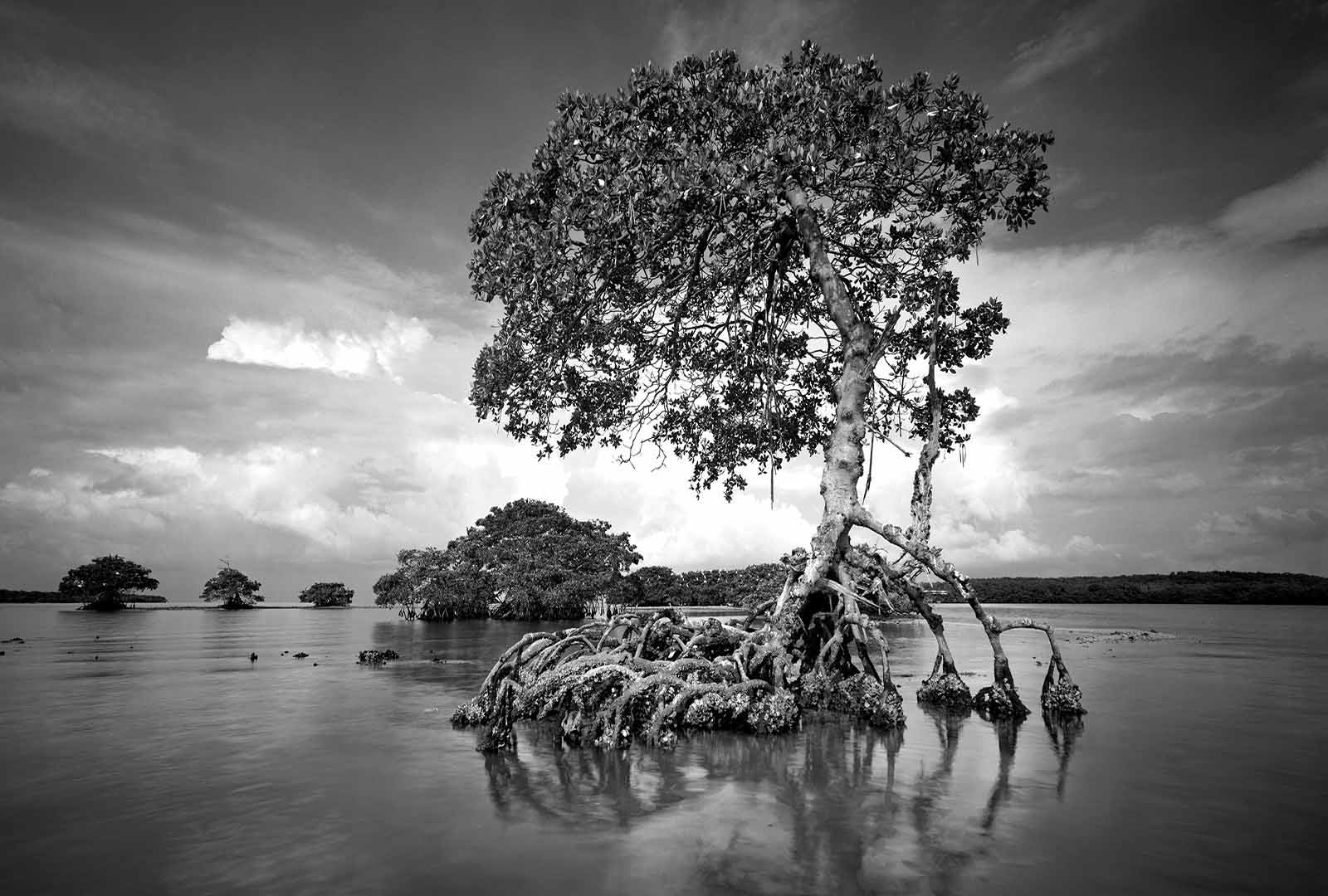 Butcher also hosts the Big Cypress Swamp Walks, located on the same property. You can sign up for educational guided tours, take nature photography classes, and even rent a cottage if you want to fully experience the wetlands. 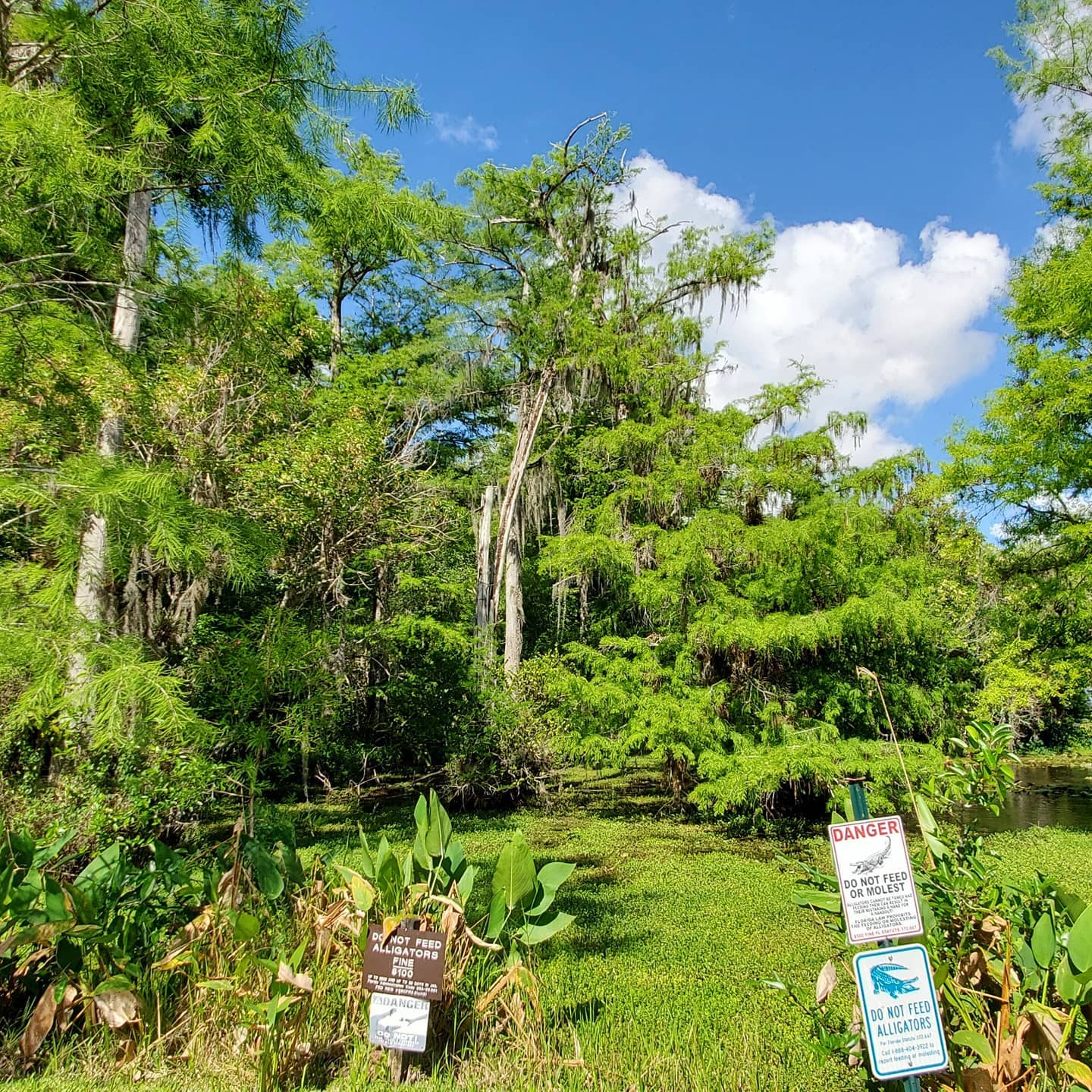 Visitors can stroll around in the exotic foliage outside the parking lot without booking a tour, but do watch out for alligators. 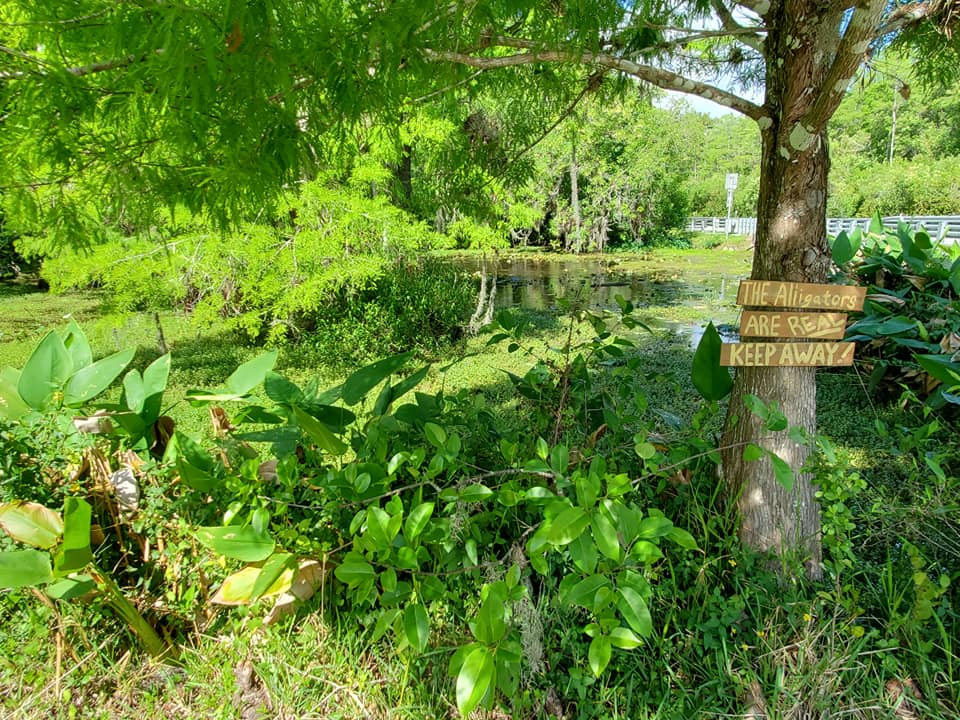 Especially this 13-ft long fella they call “Toofless” who loves watching people as much as they love watching him. He  was still and chill af while we ogled and cooed and snapped his photo. 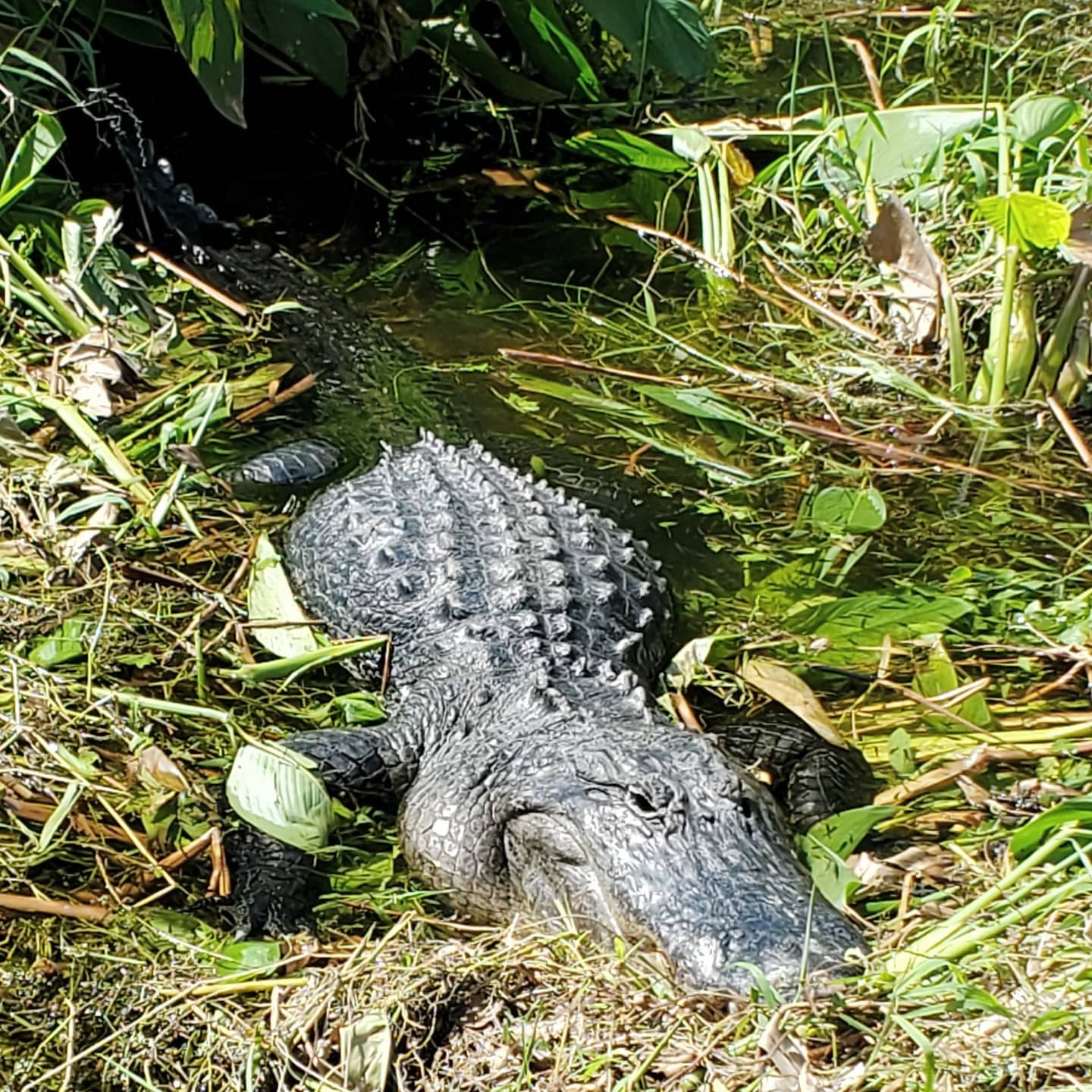 Another wild excursion in Ochopee is the Skunk Ape Headquarters. If it’s elusive, slithery, chompy, scaly, furry, and/or enjoys hiding in the elements, you will find it here. 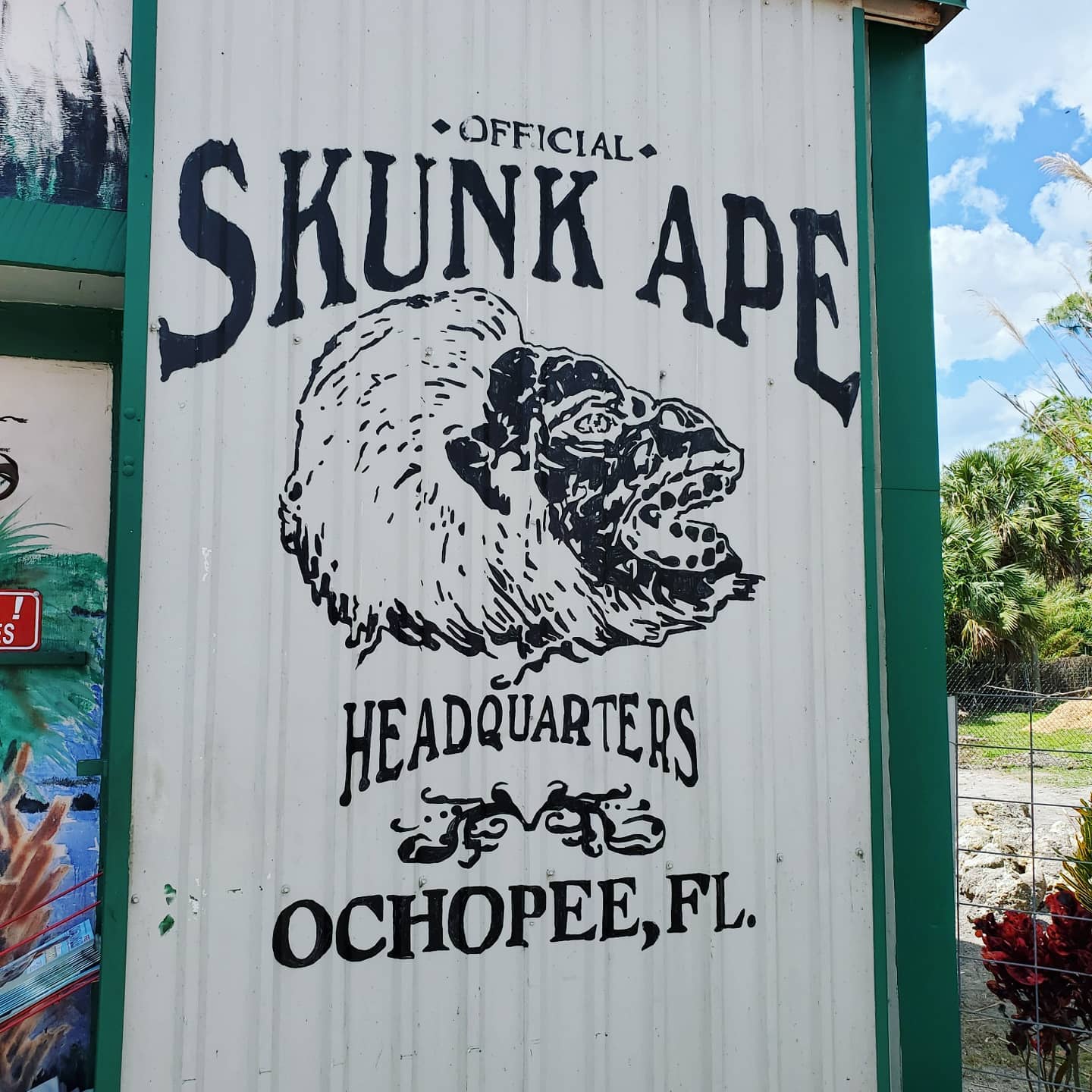 Owner Dave Shealy’s photographic evidence of a real live Skunk Ape sent the world into a frenzy. He has made appearances all over news media, Unsolved Mysteries, Discovery channel, History channel, the Smithsonian, Animal Planet, the Stephen Colbert show and other television programs. He travels the world speaking at conventions and popular events, and is a local celebrity in his own right.

My friend is an acquaintance of Shealy’s and we were fortunate to be able to visit while he was in. He greeted us with a warm welcome and regaled us with lively stories while showing us around. 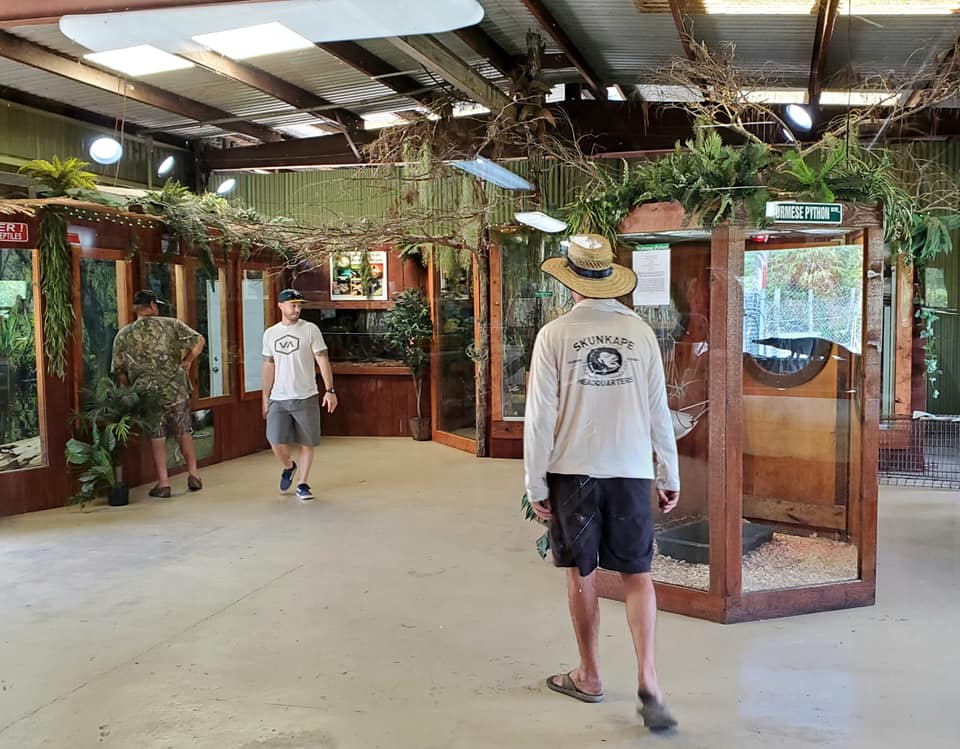 Goldie is an even bigger star around here than Dave. She is a 400-pound reticulated Burmese python and she likes to put on a show, stretching and coiling her 24-ft body around her tank and scaring people half to death with her cute yet frightening yawns. 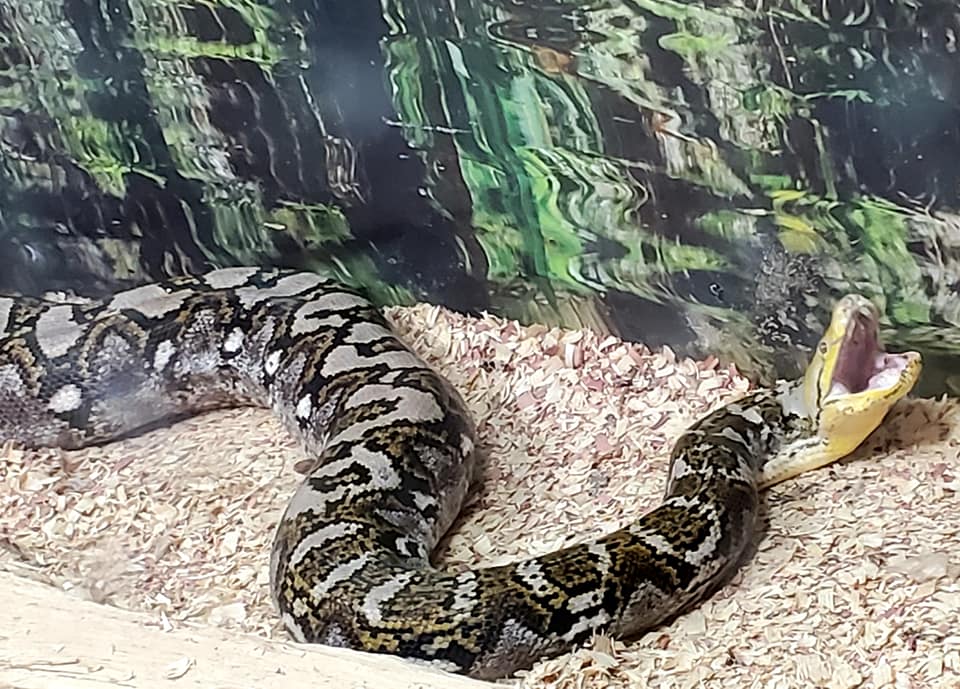 Population of these non-native pythons has grown exponentially, as one snake alone can lay up to 100 eggs each year. Despite being non-venomous, these monsters can easily grow between 8 and 24 feet long and have no qualms squeezing the life out of an adult human if and when they choose. Their appetites, stealth, and size has afforded them top predator status, killing off populations of other animals and creating an imbalance in the ecosystem.

Currently the State of Florida is offering bounties on the Burmese pythons for an indefinite Open Season. Fees are paid to anyone who catches them and the amount is based on the size of each snake.

Someone reportedly caught Goldie and brought her in to the Shealy empire to spare her life, and now people come to admire her seven days a week. 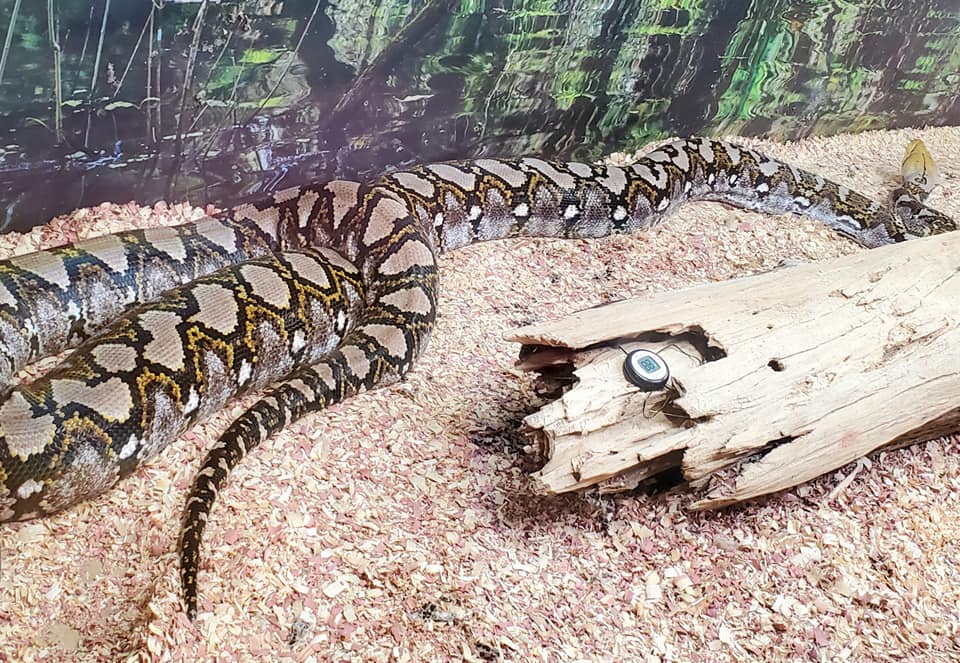 My favourite part of the animal exhibit was playing with these baby alligators. Their tiny mouths are delicately bound with string while you hold them so they don’t accidentally snag a finger, but they are well-fed and well-loved here.

One caregiver demonstrated how alligators do not have much muscular strength for opening their jaws, but have an unbelievable amount of force to quickly snaps those jaws shut. 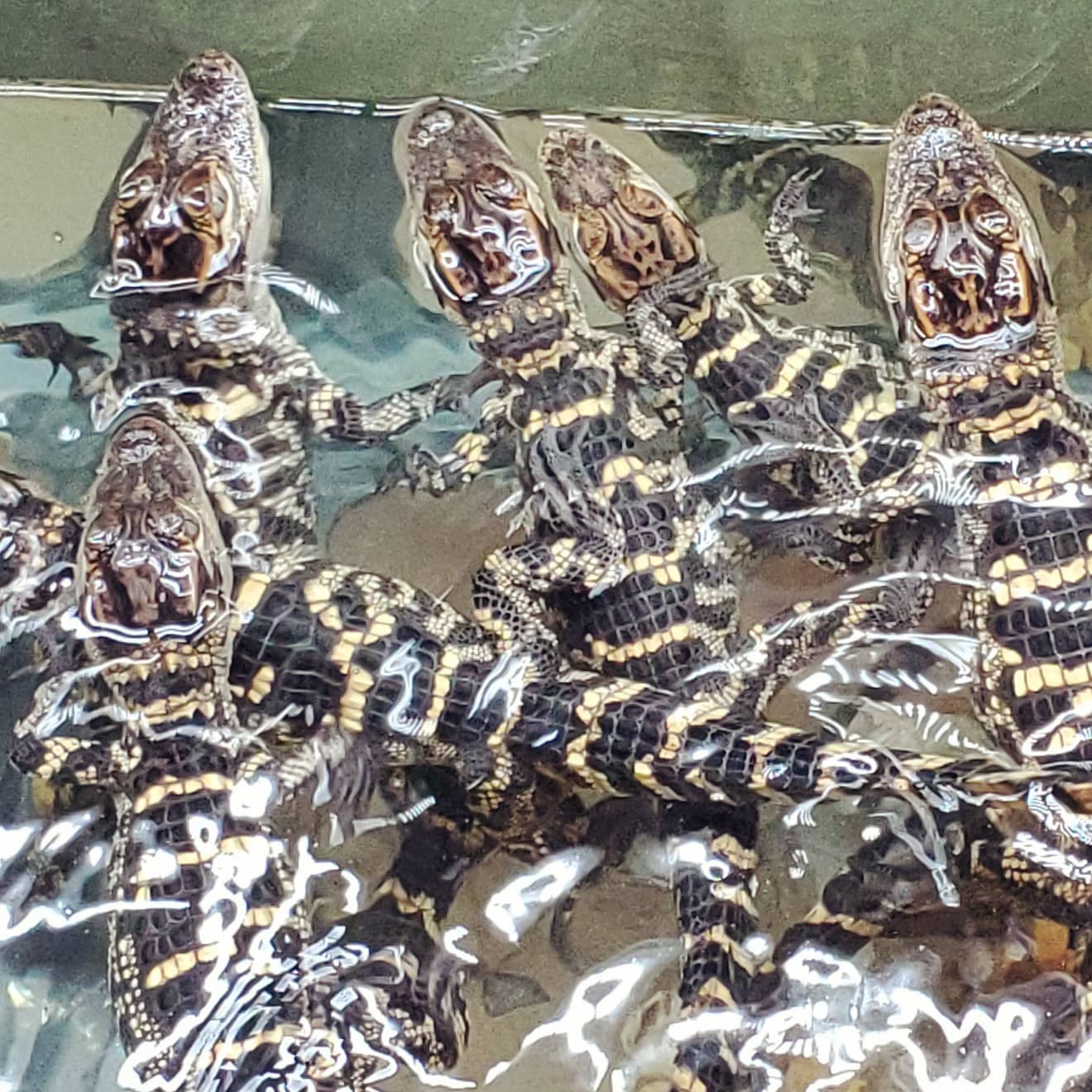 This guy had grown too big for the baby tanks and was in gator jail until they could properly release him outdoors. Reptiles and amphibians are so comical to watch moving around outside their natural environment. 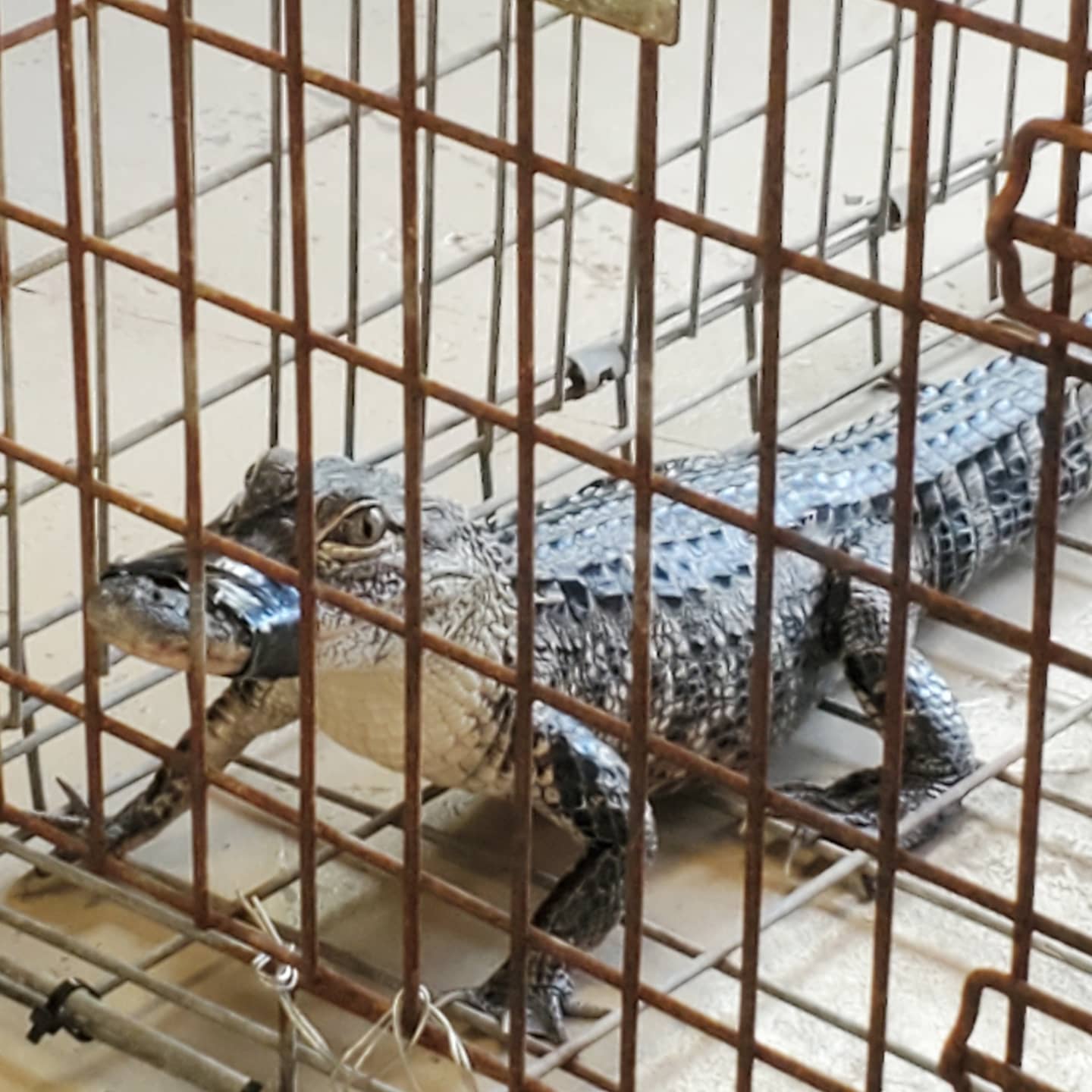 Trail Lakes Campground and Everglades Adventure Tours are also part of the Skunk Ape Headquarters complex. You can reserve cabins or bring your own tent, sign up for swamp and safari tours, fish, hike, rent kayaks or pole boards, or stock up on goods from the Outfitters shop.

Pick up lunch at Joanie’s Blue Crab Café and see exhibits at the Big Cypress Swamp Welcome Center before stopping by the Ochopee Post Office, the smallest post office in the US. This tiny one-person shed measures about 8 x 4 x 7 feet in mass and has been serving the Everglades’ postage needs since 1953. 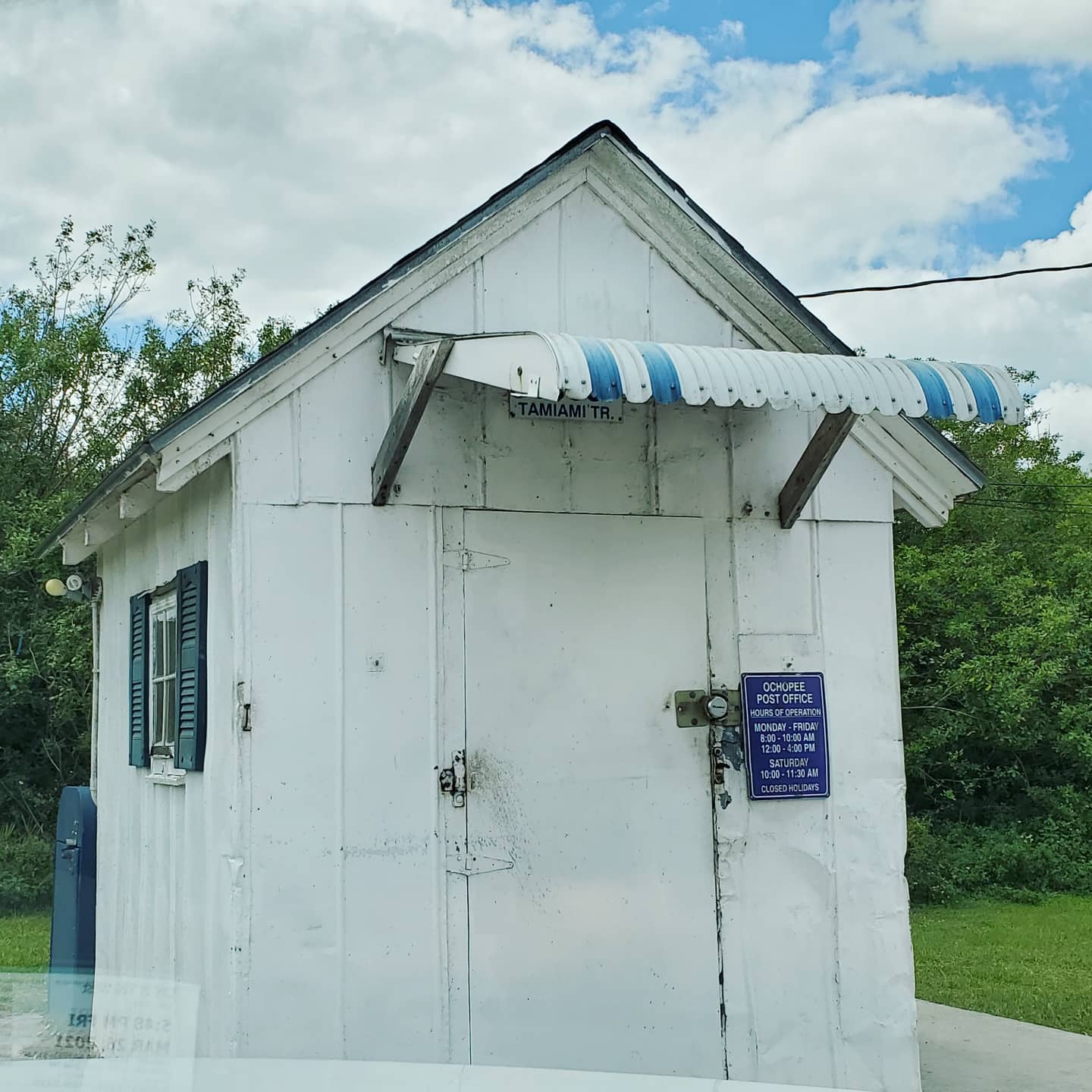 Everglades City is known as the Stone Crab Capital of the World, and it is the gem of the Everglades. White people first settled this area in the early 1870s and quickly took advantage of the landscape to invite ecotourists more than a century before that term was even used. 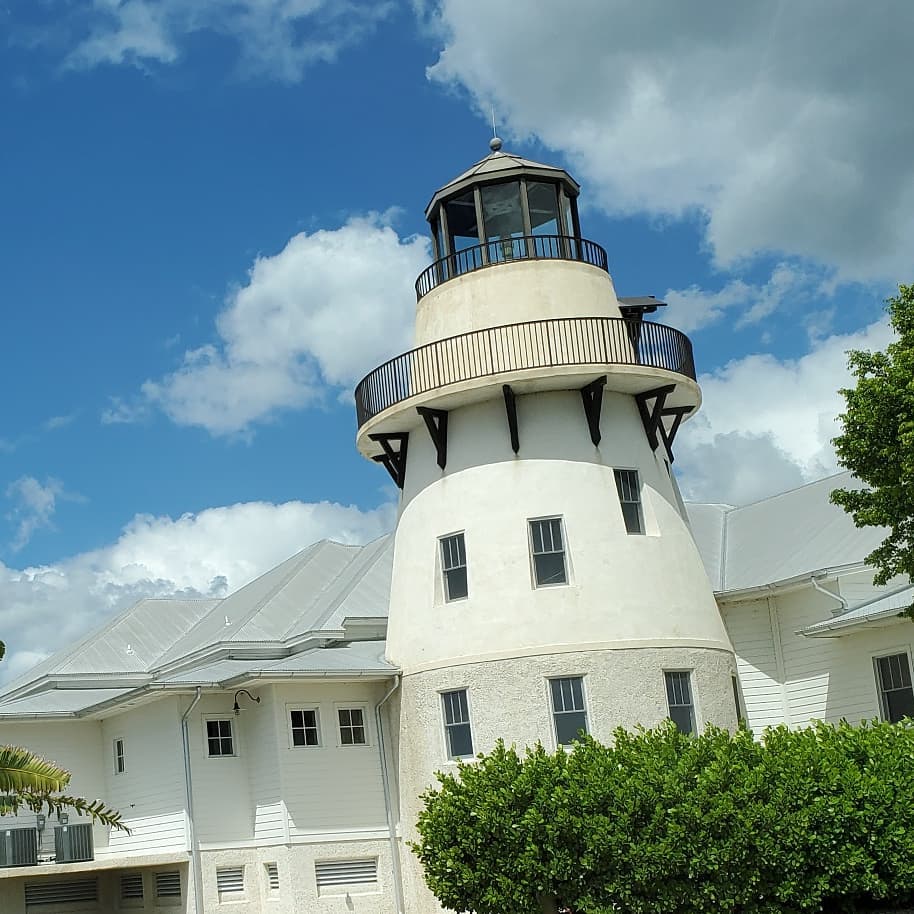 This small town hosts the Everglades Seafood Festival and Calusa Days celebration of Native Americans in late winter/early spring. Everglades City is a paradise for fishermen, boaters, kayakers, and birdwatchers year round. 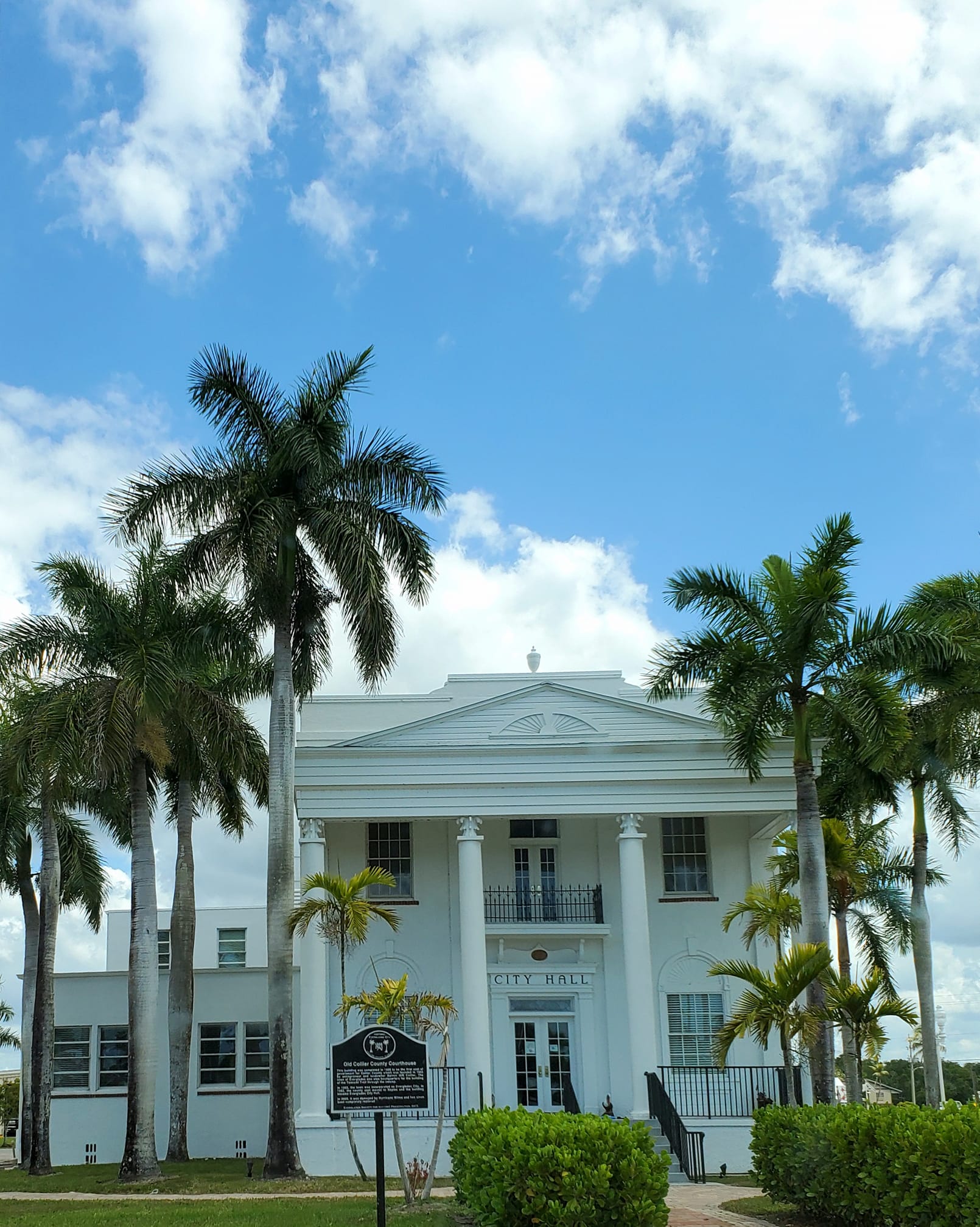 One of the most surprising places on this trip was the Everglades City Rod & Gun Club.

I had expected it to be something like the cruddy smoke-clouded Moose Lodge in my town, or maybe like the Frisco Rod & Gun Club in the Outer Banks which is more like a bait shop that hawks pork rinds. This one blew me away.

This private club was built in 1864 and hosted many famous icons such as Ernest Hemingway (what a perfect place for him!), John Wayne, Presidents Roosevelt, Truman, Nixon, and Eisenhower, and so many others. 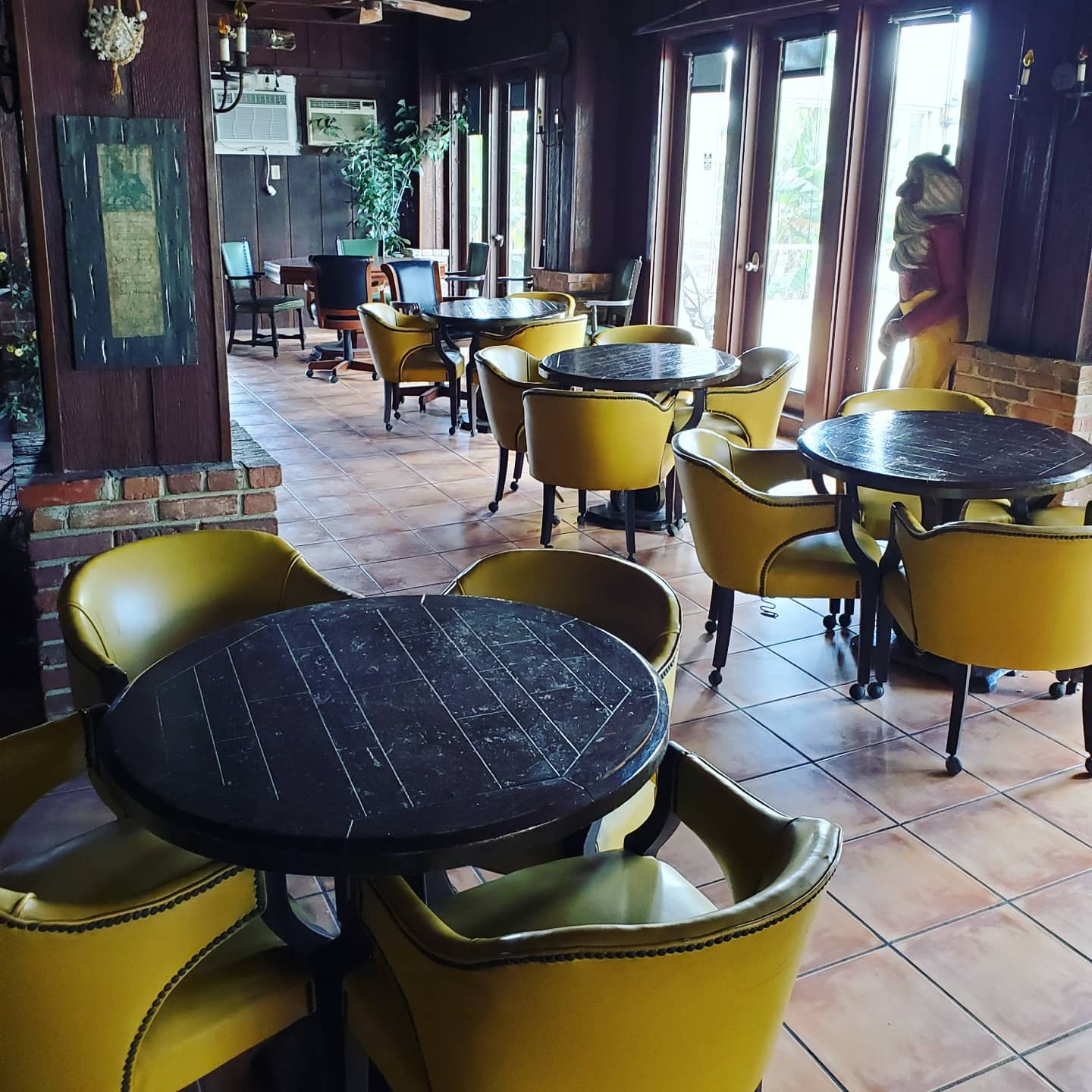 The glossy floor-to-ceiling wood paneling and unique lighting fixtures, furniture, and patterns sang of old swamp glamour and decades of men smoking cigars, knocking back whiskeys, and boasting about the day’s catch. 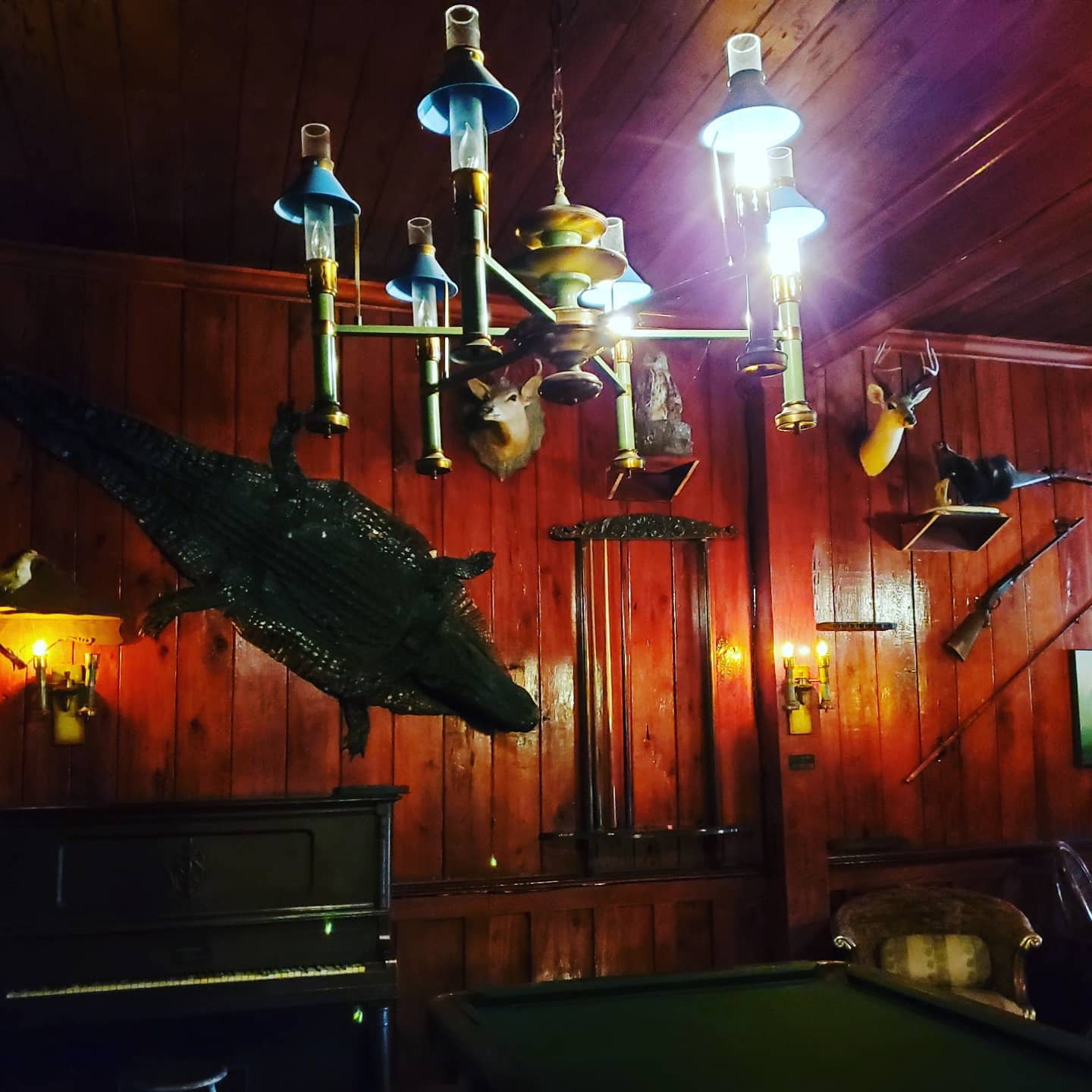 Mounted animal heads and hides make me queasy but I can appreciate that this is the aesthetic of such places and they really hit the target. 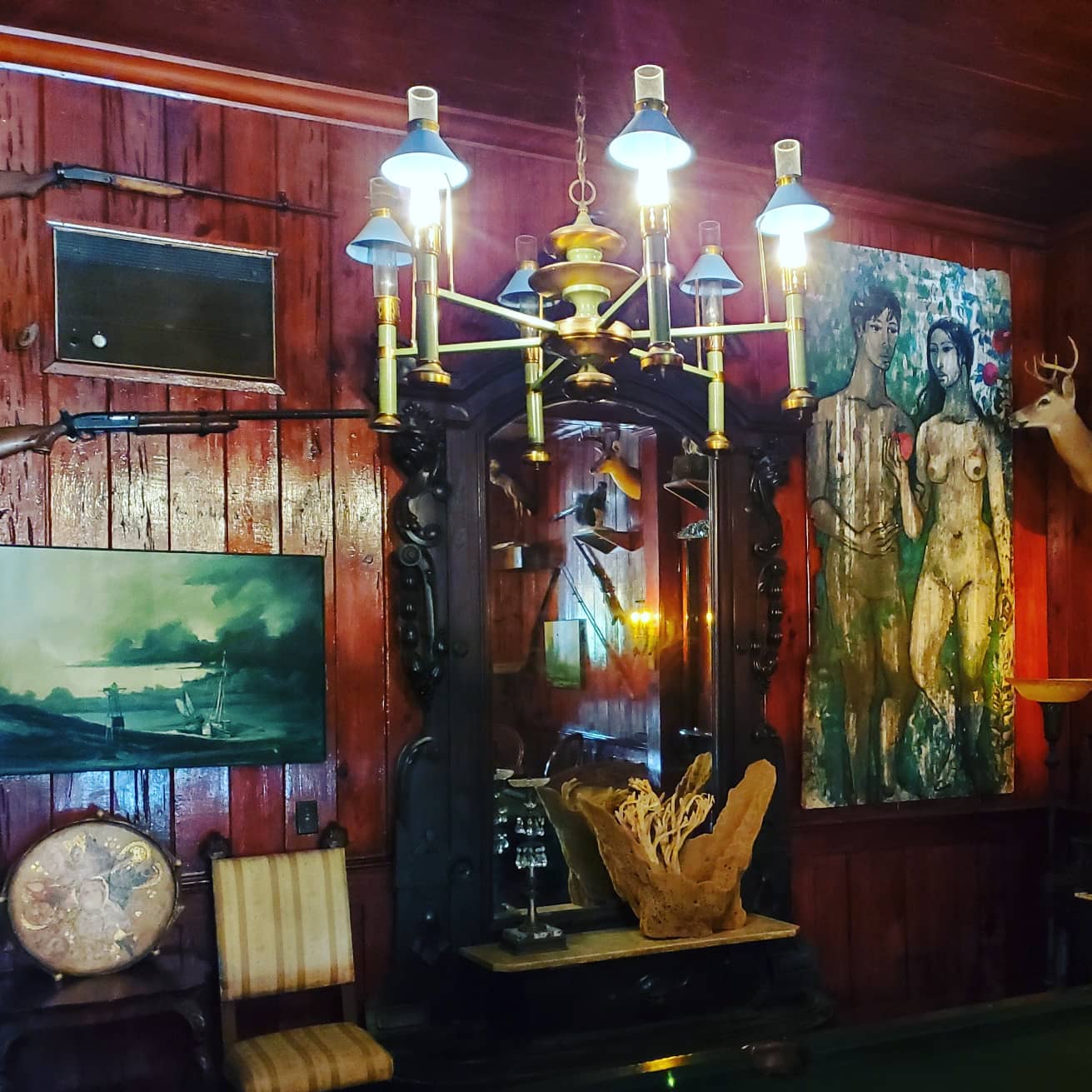 We had the place to ourselves before they opened for dinner, but I can only dream of the parties they have hosted. Hopefully next time we can dip in the pool and stay overnight in the lodge. 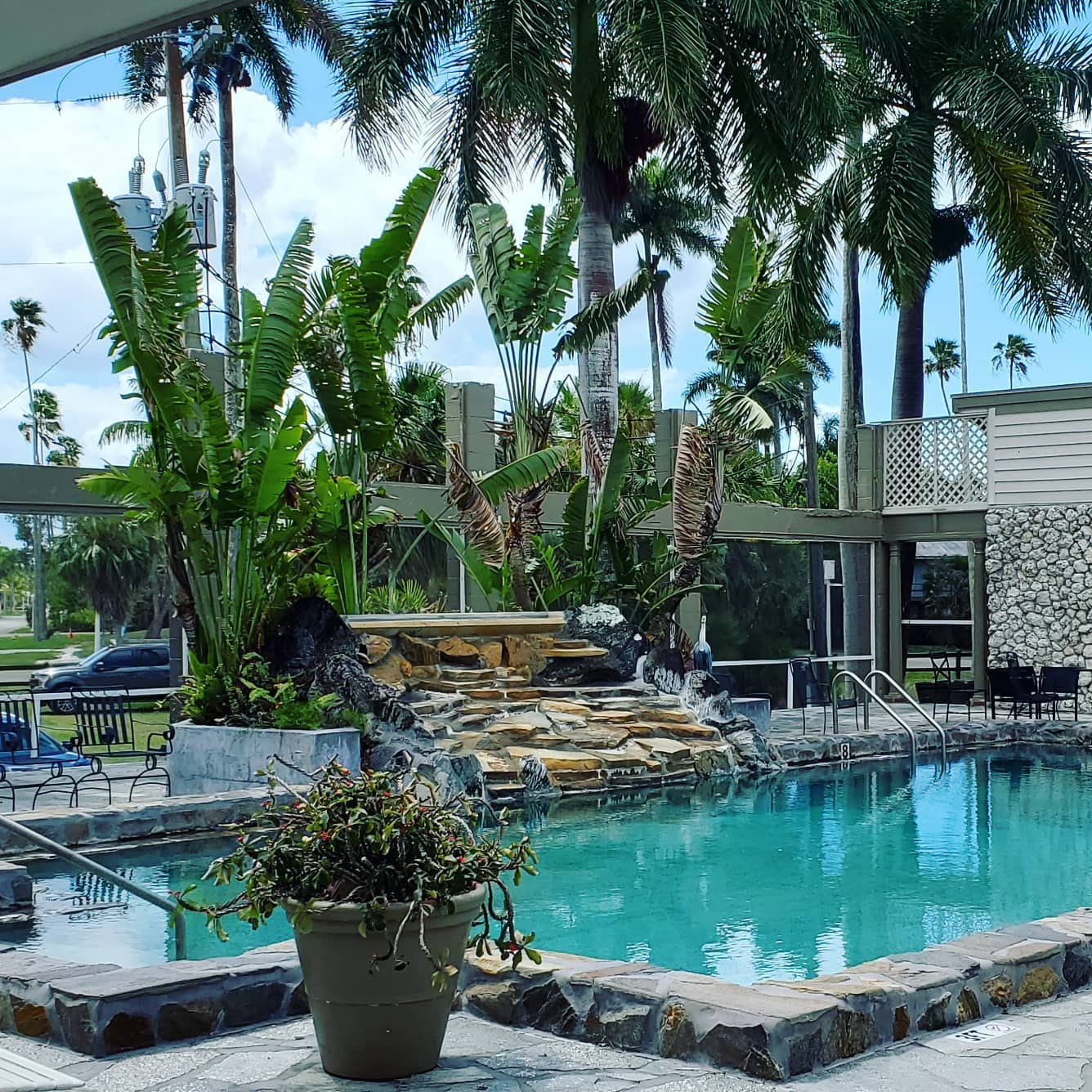 Chokoloskee Island is part of the Ten Thousand Islands network, and just a few minutes from Everglades City. This small unincorporated fishing community was originally inhabited by the Calusa Indians, and then the Seminoles for a brief period.

In 1906, a man named Ted Smallwood moved in and opened up a trading post. Smallwood Store closed in 1982 but everything was kept intact. Ted Smallwood’s granddaughter reopened the building in 1990 as a history museum of Chokoloskee and Ten Thousand Islands. It has been on the National Register of Historic Places since 1974 and owners describe it as a time capsule of Florida pioneer history. 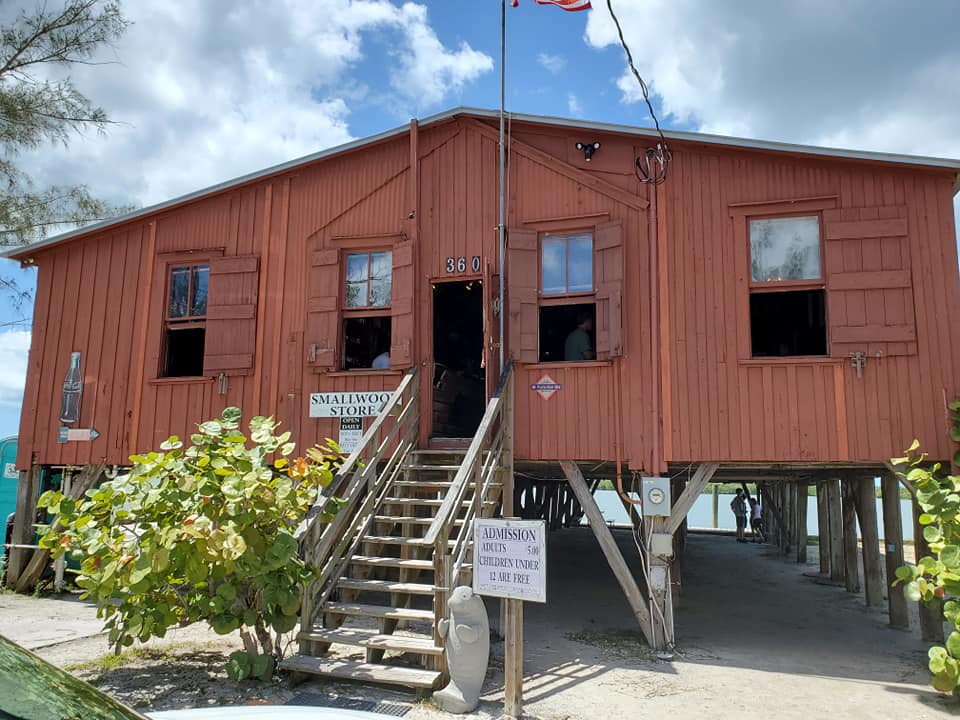 Another local celebrity of the Everglades is Loren G. “Totch” Brown who was born, raised, and spent his entire life in Chokoloskee. Well, almost. He served a term in the military, and later served time in the clink.

Totch had become part of a marijuana smuggling operation in the late 1970s that called their bricks of contraband square grouper. This term sounded like regular old fishing village slang but officials eventually caught on, and the IRS stuck it to him for tax evasion.

The film Wind Across the Everglades was filmed in Chokoloskee in 1958 and Gone Fishin’ in 1991. Totch took on small roles among high profile stars like Gypsy Rose Lee, Christopher Plummer, Burl Ives, Peter Falk, Joe Pesci, and Danny Glover. Pick up his book Totch: A Life in the Everglades for more stories and a first-hand account of early, rustic life in the Everglades.

In the area for a while? Follow us to Naples for a cruise to the Gulf of Mexico! (blog in progress)

*************
© Copyright Fernwehtun, 2015- Current. Unauthorized use and/or duplication of this material without express and written permission from this site’s author and/or owner is strictly prohibited. Excerpts and links may be used, provided that full and clear credit is given to Fernwehtun and Fernwehtun.com with appropriate and specific direction to the original content.

One thought on “Swamp Glamour; Reptiles, Skunk Apes, & Slot Machines in the Everglades”