Between a surgery, work, then a year and a half so far of Covid-19 forcing us to cancel our trip, I have not been able to go back to my beloved Vaterland for over three years. That ache in my heart for lederhosen and medieval architecture is sometimes unbearable.

We set out instead for Helen, a Bavarian-themed tourist attraction town in north Georgia, about an hour south of Chattanooga. It has street names like Munich Strasse, Edelweiss Strasse, Brucken Strasse (no umlaut), Chattahoochee Strasse, and Alpenrosen Strasse, and is full of cobbled walkways, a matching colour scheme, half-timbers, painted exteriors on point, and most importantly, Biergartens.

Helen has only around two square miles and less than six hundred residents, but boasts over 200 local businesses. It is Georgia’s third most-visited city after Atlanta and Savannah, but Helen as we know it is only a few decades old.

The Cherokee Nation ruled this land until the Indian Removal act of 1830. Multiple authorities on Helen’s history affirm that America’s first gold rush actually started when someone found gold in the Nacoochee-Helen Valley a couple miles from Helen back in 1828. The historic England Gold Mine where the gold was found is still standing.

Georgia’s Gold Rush led to the California Gold Rush, and the hopefuls who upturned its earth quickly moved westward.

My song for this blog is “Ten Grand Goldie” by one of my favourite bands, Einstürzende Neubauten.
German, of course.

In the late 1800s the settlement took on a new industry, lumber. Sawmills and logging companies swooped in with the help of the railroad, annihilating the environment in yet another way before moving on in the 1930s.

Helen had been officially incorporated in 1913 and the threadbare town’s saving grace at that point was the creation of the Chattahoochee National Forest. Tourists that came through helped the economy, but it wasn’t quite enough.

A group of local businessmen held a brainstorming session about what they could do to revive the town, and decided to try their hands at different type of tourism. 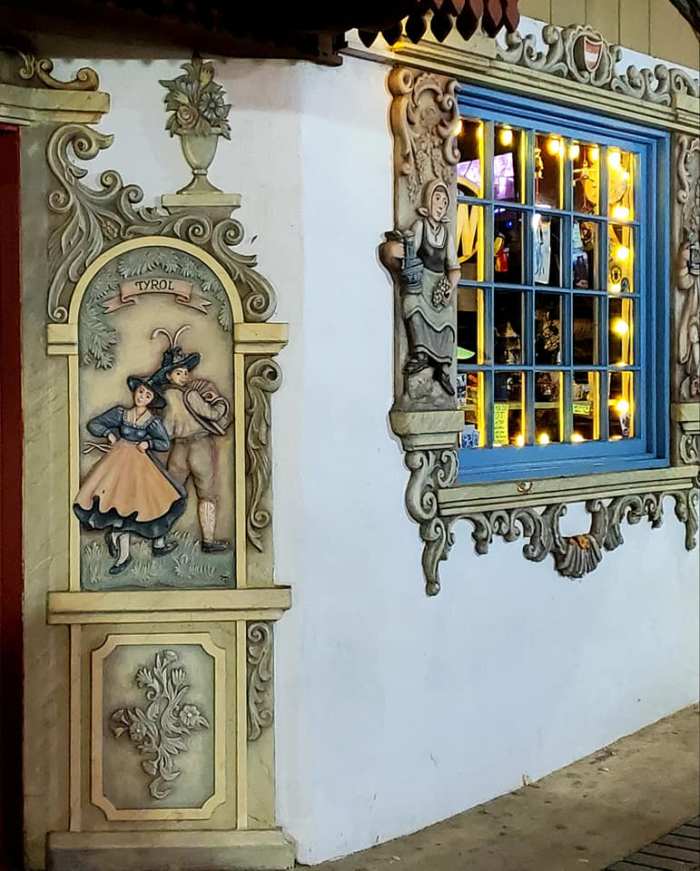 They hired a friend and artist named John Kolloch with German ancestry to create sketches from his memories in Bavaria. Renovations and construction began in 1969 to convert the entire town into a mock Bavarian village named Alpine Helen.

Helen’s location in the Appalachian/Blue Ridge Mountains along the Chattahoochee River has the same geographic appearance as many German towns that are situated in mountains with rivers flowing through. To say it was a “Little Bavaria” was not much of a stretch.

So what do you do there? I have to start with German food. There is no way around this one.

Hofbrauhaus
Our favourite restaurant in Helen is the Hofbrauhaus, patterned after the real one in Germany. The exterior mural says it is the “Hofbrauhaus Inn International” but that is just decorative, there is not actually any kind of lodging available. 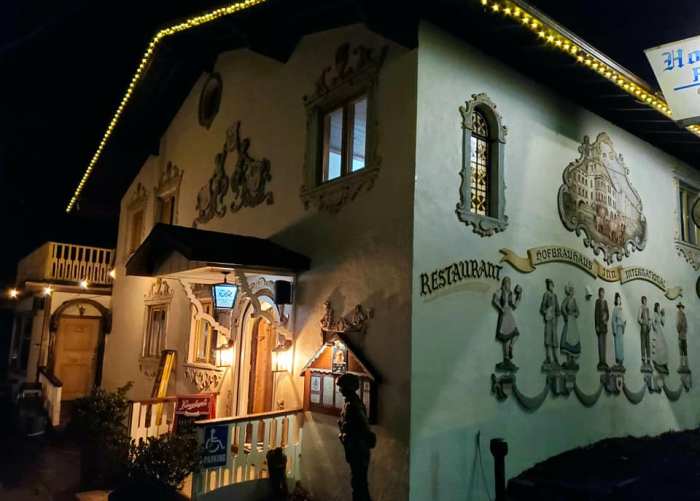 This one also has a “GI Germany” pub fashioned after the army base Kolloch spent time in during the war.

Hofbrauhaus has the best giant Brezeln mit Bierkäse of any place we tried, and we tried a few. I have been to the real Hofbrauhaus in Munich and am a regular at my local German biergarten, but I can never get tired of this meal.

My favourite German dish is Rahmschnitzel, kind of like Jägerschnitzel except it has a thick sauce made of onions, cream, and often some cheese instead of brown mushroom gravy. 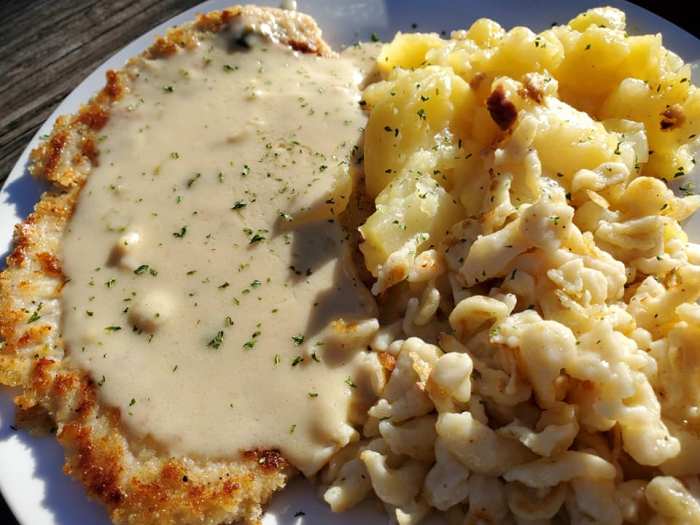 At night, the Hofbrau has live music inside and we somehow had one whole room to ourselves. On our second visit, we shared a crisp grilled Reuben.

Cimmi’s Courtyard Cafe
For breakfast, Cimmi’s serves traditional and Southern American breakfasts, perfect after a night of self-guided German beer walking tours. While tourists file into the Hof Bakery and other specialty cafés, the locals eat at Cimmi’s. 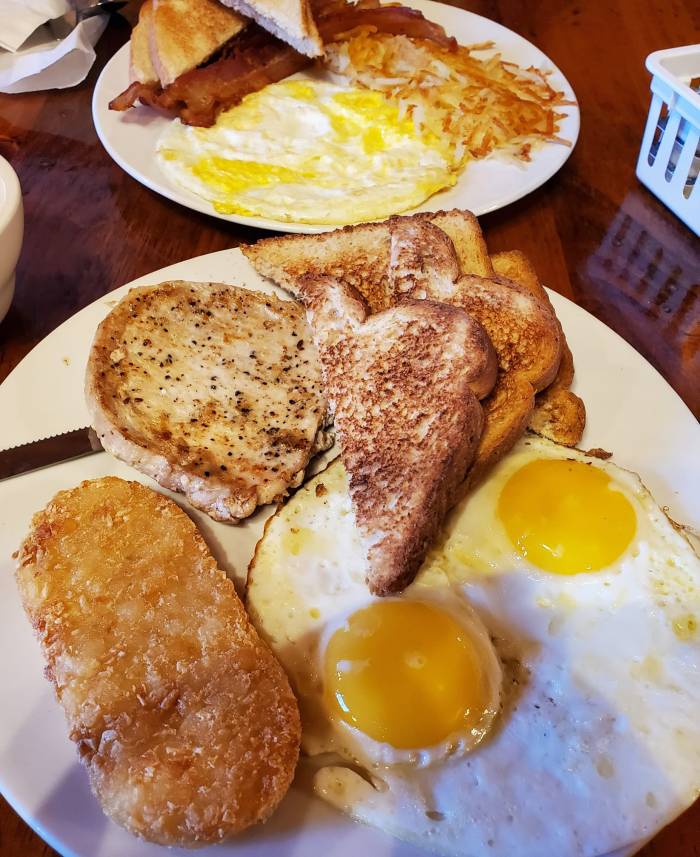 Bodensee (Lake Konstanz) Restaurant
We had another delicious Rahmschnitzel at the Bodensee. The owners are from Romania and lived/worked as chefs in Germany for many years before moving to Helen and opening the Bodensee.

In addition to the usual German fare, steaks, seafood, and fancy Bavarian dishes usually reserved for holidays or important occasions are their specialties. I was so enthusiastic about diving into their version of Rahmschnitzel that I almost missed taking a photo.

Muller’s Famous Fried Cheese Café
Muller’s specialty is German and Czech foods and they are notorious for their fried cheese squares. It came with a salad and bread, but the waitress talked us into ordering a Nutella crepe too.

One of the best things about traveling with other adventurous eaters is that you can basically order a little of everything, sample it all family-style, and not end up feeling sick after a gastro tour.

We did not go inside since it was too crowded to keep our distance, but we revisited King Ludwig’s later that night when it was nearly empty.

Just like in Germany, you walk up to the outdoor counter, place your order, then take it on a tray to your table. 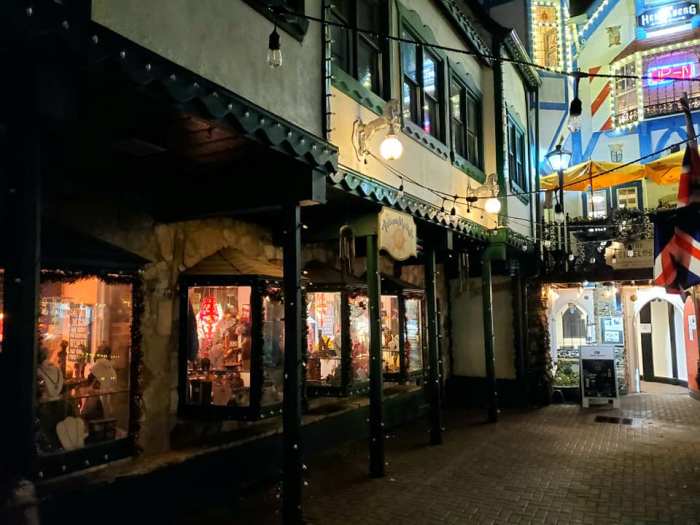 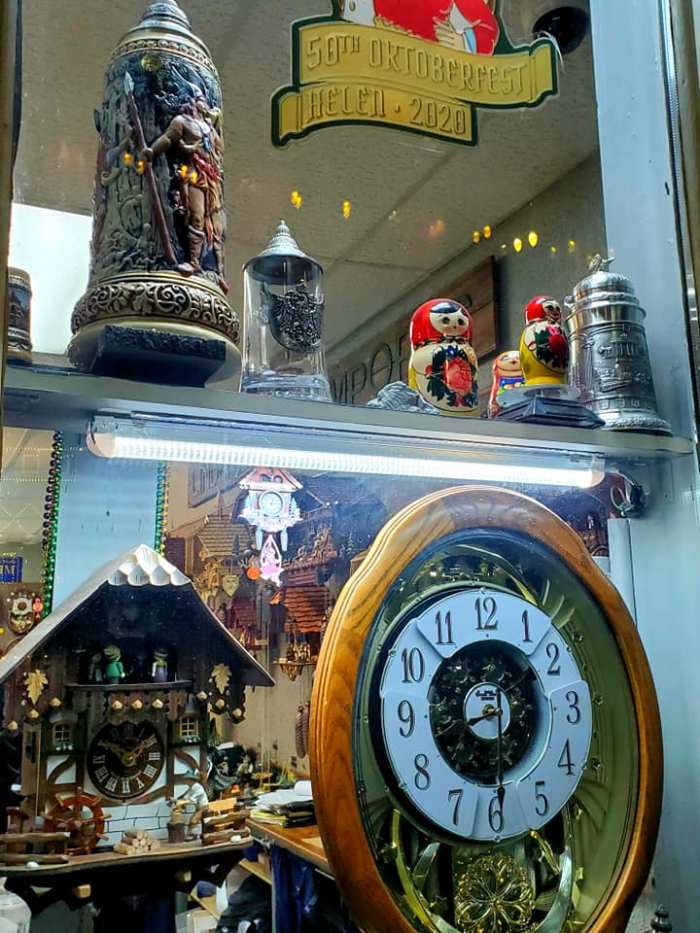 There really is no high level of actual German ties or ancestry in Helen, so it is kind of a catch-all for anything Germanish like Austrian, Swiss, Dutch, Czech, Viking, and Slavic/Russian kitsch in the gift shops and on the menus. I love it all. 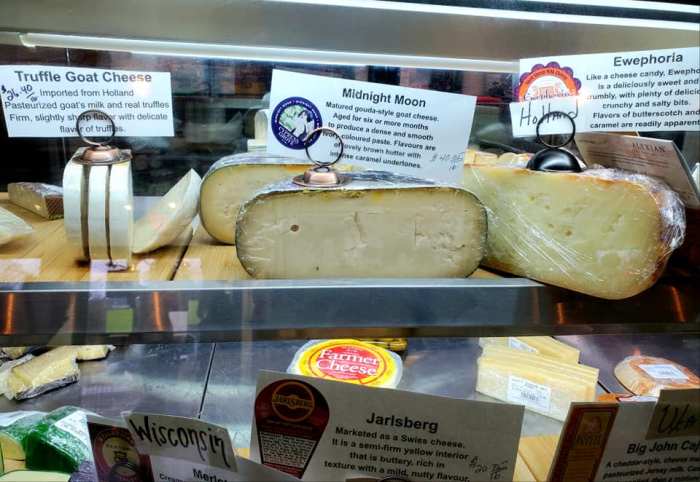 They missed a good opportunity to call it the Chattahoocheese, but okay. 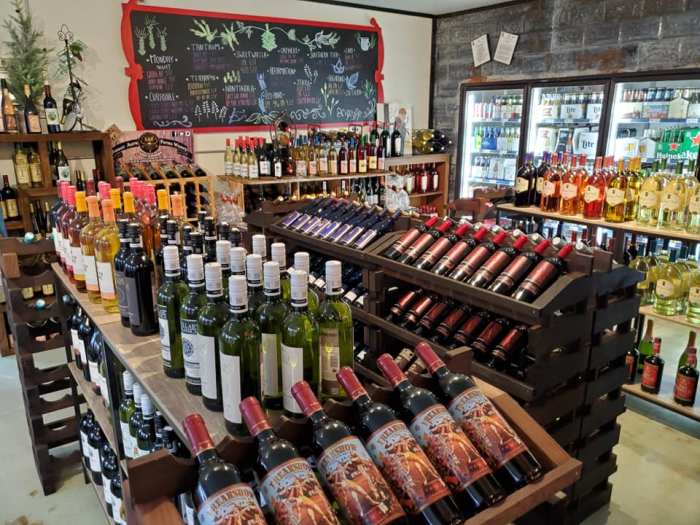 Habersham Winery
On the southern end of downtown Helen, Habersham Winery offers tastings, gifts, and all the things you might like to have with your wine. 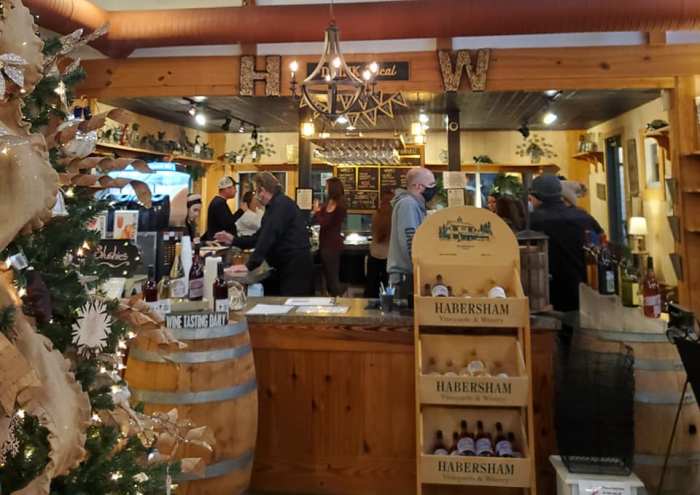 Habersham looks eerily like the entrance of Dachau Concentration Camp and that gave me the willies, but it was warm and inviting inside. 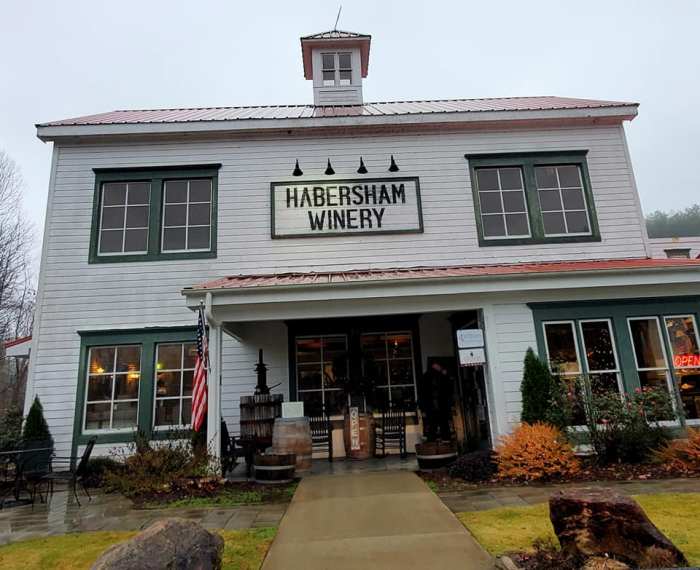 Just for fun, here is a photo I took of the entrance of Dachau: 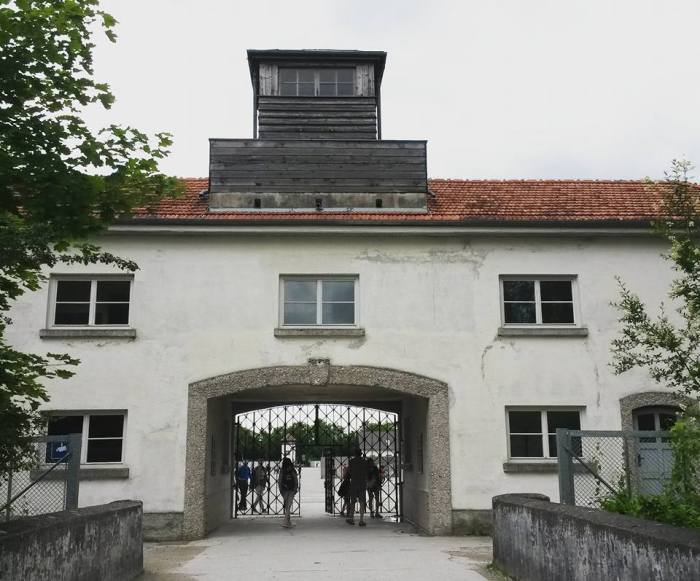 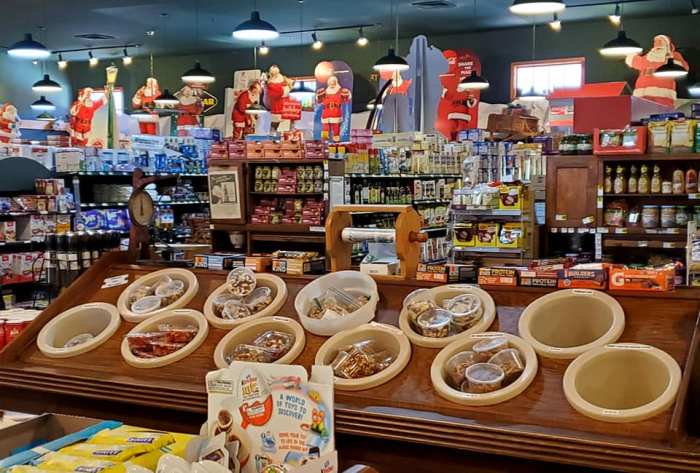 Betty’s is like Cracker Barrell meets Publix meets Mast General Store, and it was full of things we had never tried before. 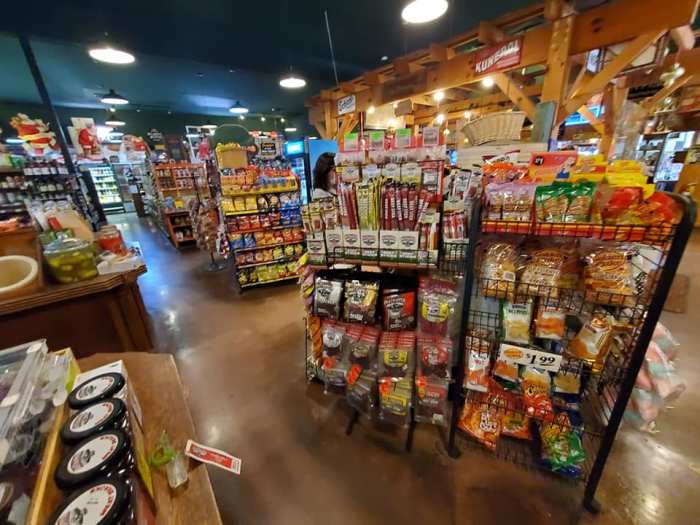 Helen Square is another location primarily for decorative purposes, but this building marks the spot for several more cool stores in Helen. 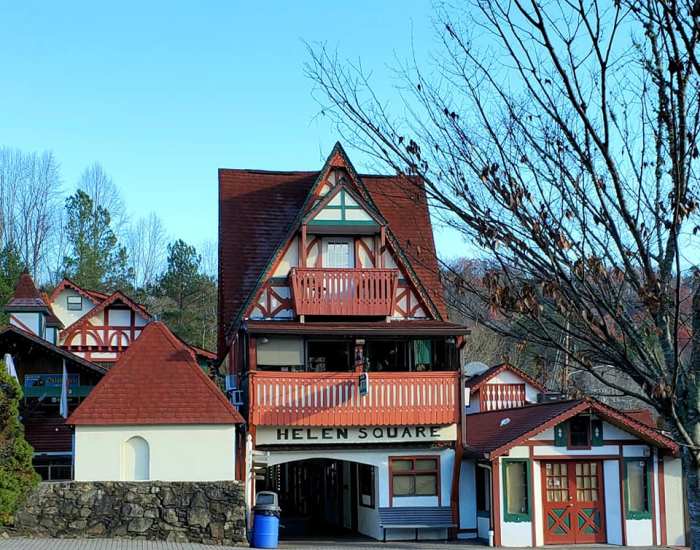 Hansel & Gretel Candy Kitchen, Fox Winery, Village Crepes, and Tim’s Wooden Toys are among the shops arranged like an outdoor mall on either side of the street.

The Glass Blowing shop offers live demonstrations and can make anything you like on the spot.

The value in this place is for the location though, and I would stay there again just for that reason. 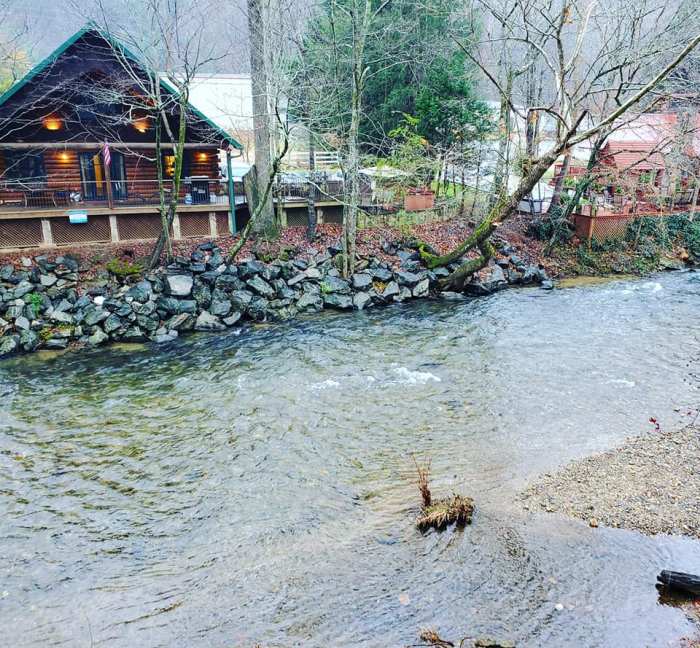 The Castle Inn
I had hoped to book a room at The Castle Inn, but that remains on my list for next time. This lovely inn sits right on the river where the bridges arch across the town center.

Alpine Dispensary also makes its home in the street level.

Below the bridge, visit the riverfront pub Troll Tavern for drinks and small plates. This was the coolest hangout spot after dinner and on into the night, even if their Bierkäse looked and tasted like cream of broccoli soup.

There are various levels of walkways going around, beside, and over the river near The Castle Inn and Troll Tavern. It felt safe and we did not encounter anyone sketch.

One night, we ended up at a place called Monday’s Pub that also has a big outdoor patio. Our server at Hofbrau recommended a stop there where locals hang out after dark.

A Cherokee grandma named Mamu befriended us right away and we imbibed, frankly, a lot more delicious German beer than we should have. Making our way back to our hotel was an adventure, to say the least. 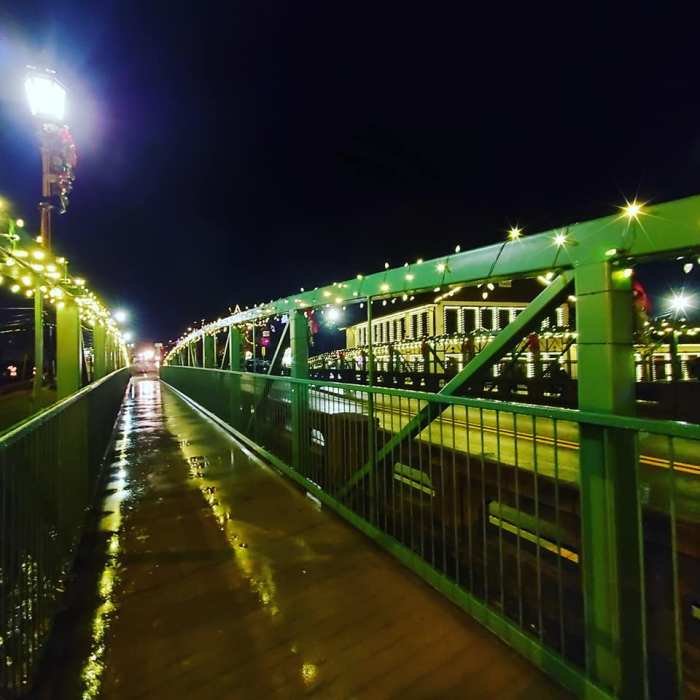 If you visit Helen during the Christmas holiday season, the entire town is lit up with colourful lights, ornaments, and blow-up characters for Alpenfest. Walking through Unicoi Hill Park at night felt like a dream, even for a Scrooge like myself.

Other annual events in Helen include the Southern Worthersee, the Helen to the Atlantic Hot Air Balloon Race and Festival, Bavarian Nights of Summer which is like a mini Oktoberfest every Saturday night in summer months, Winefest at Habersham, July 4th celebrations, and the longest running Oktoberfest in the US.

By this I mean it goes on from September through part of November and has been going on consistently for over fifty years now, not that it was the first city to host Oktoberfest in the US.

Outdoor Adventures
When in Helen, you are also in the Blue Ridge Mountains by the Chattahoochee River so the options for hiking, camping, birdwatching, fishing, tubing, kayaking, and even horseback riding are endless.

Smithgall Woods State Park & Conservation Area and the Unicoi State Park are both a very short drive away.

There are four waterfalls near Helen including Dukes Creek Falls, Raven Cliff Falls, DeSoto Falls, and Anna Ruby Falls. We hiked to Anna Ruby Falls on our third day, and you can read more about that here. 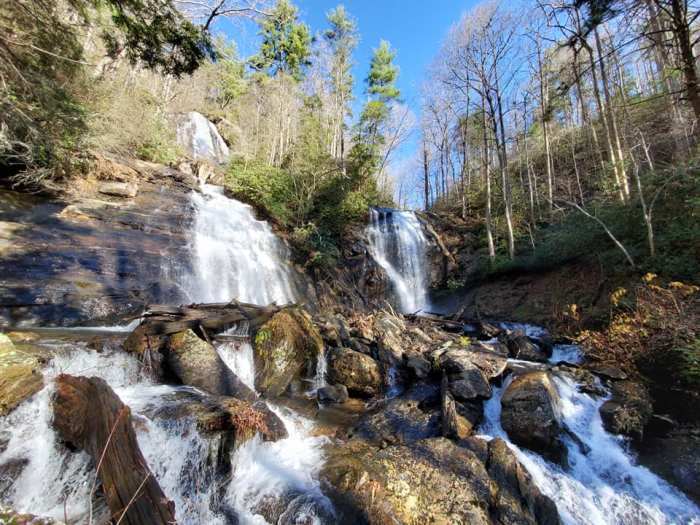 Cherokee History & the Sautee Nacoochee Indian Mound
Predating the Cherokee, archaeologists determined that Native Americans from the Woodland Culture and the Southern Appalachian Mississippi Culture settled this area between the Sautee and Nacoochee Valleys.

There is a giant mound in the middle of a cow field and a small, vague plaque by the street that says it is a Cherokee mound, but that has been proven incorrect.

It was raining when we visited so I looked it up and learned that this property is part of the Sautee Valley Historical District and is on the National Register of Historic Places.

Be sure to check out the Nacoochee arts & shopping village and the Helen Arts and Heritage Center with its art gallery, pottery studio, and history museum.

In the area for a while? Follow me to Blue Ridge, McCaysville, or Blairsville!

6 thoughts on “Holiday in Helen; a Slice of Alpine Georgia”