The Town of Manteo makes up the northern part of North Carolina’s Roanoke Island, and the Town of Wanchese is the southern part. Both were named after two Croatan Native American leaders who served as peacekeepers and diplomats to the English colonists.

Chief Manteo happily traveled with them, was baptised, and given the name Lord of Roanoke. This made Manteo the first Native American to be accepted into the Church of England and hold a title of nobility. 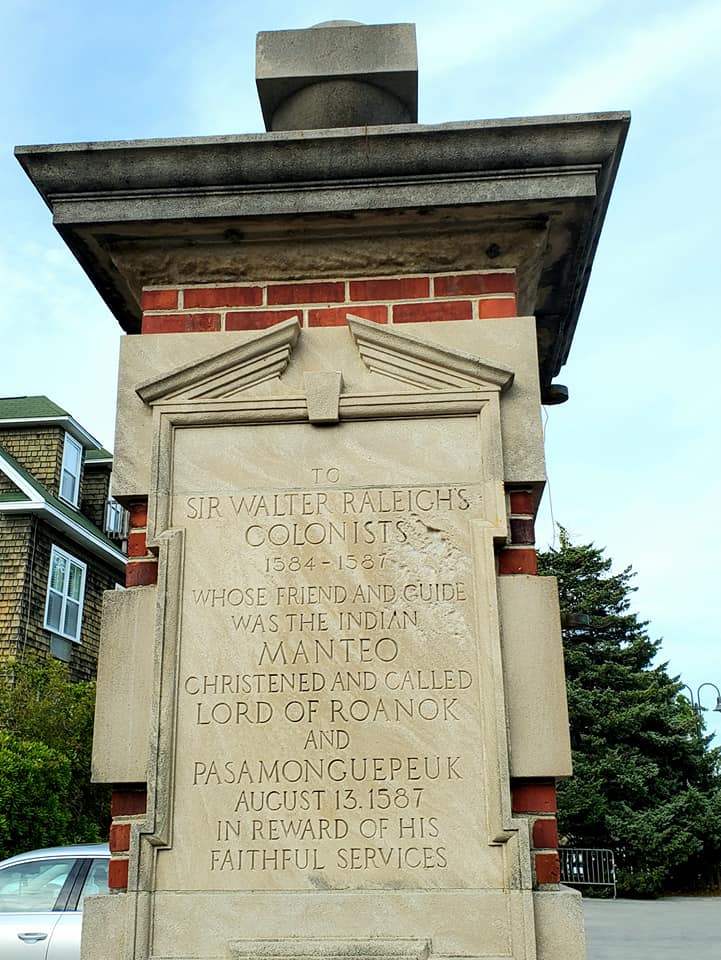 His counterpart Wanchese is said to have been suspicious, stubborn, and somewhat hostile but he made himself useful to the colonists anyways. I certainly do not blame him for his attitude, but I find it amusing that the less popular Town of Wanchese named after him is a rustic fishing village often described as salty.

My song for this pick is “Attitude” by Pay Attention:

In 1585, Sir Walter Raleigh commissioned a group of 115 British settlers across the ocean to settle on a coastal island and start a new colony with hopes of success and good fortune in the New World. They arrived at North Carolina’s Outer Banks on what became Roanoke Island.

Colony Governor John White and some of his men later crossed the ocean again to gather supplies but the Spanish War was raging and they were delayed. Three years, delayed. When they finally returned to the colony, there was nothing left. Everyone and everything had vanished.

The mystery of the Lost Colony has sustained a wildly popular outdoor drama that has been telling this story since 1937. Some people speculate that the colonists were captured and assimilated into various Native American tribes, some think they went willingly, and some believe they went searching for food and died in undiscovered locations. There are so many theories. Where did everyone go? What happened in those three years?

First Colony Foundation is a non-profit dedicated to answering those questions. Their archaeology team has conducted multiple excavations since forming in 2003, and each project continues to provide further insight to shape what we do know. Recent discoveries of identical artifacts at formerly inhabited sites are indicating that at least some of the colonists willingly left the original colony site and lived among the Natives for survival.

Manteo as we now know it is one of North Carolina’s oldest towns, established in 1873 and incorporated in 1899. It is a waterfront community and you might notice right away that all the shops and cafes along the water have two entry points, one on the street and one in the back for those who arrive by boat.

The docks and boardwalks run the same length of the street blocks so you can really choose your own adventure while you go about shopping and sightseeing.

We had lunch at Poor Richard’s Sandwich Shop, a deli and pub that is designed to make you feel like you are inside an old ship. This theme and its prime location on the water make Poor Richard’s a vibrant nightlife spot.

We split the Greek chicken wrap with cucumber, black olives, and feta, served with marinated veggies. We also split the grilled Reuben, and both dishes were excellent.

We ate outside and watched boaters come and go, but were most intrigued by this odd looking ship secured in place.

The wooden Cora Mae Daniels Basnight Bridge crosses Manteo’s Shallowbag Bay and leads to the Roanoke Island Festival Park, a 25-acre island historical complex. The old ship we saw is a replica of the Elizabeth II and it belongs the park. 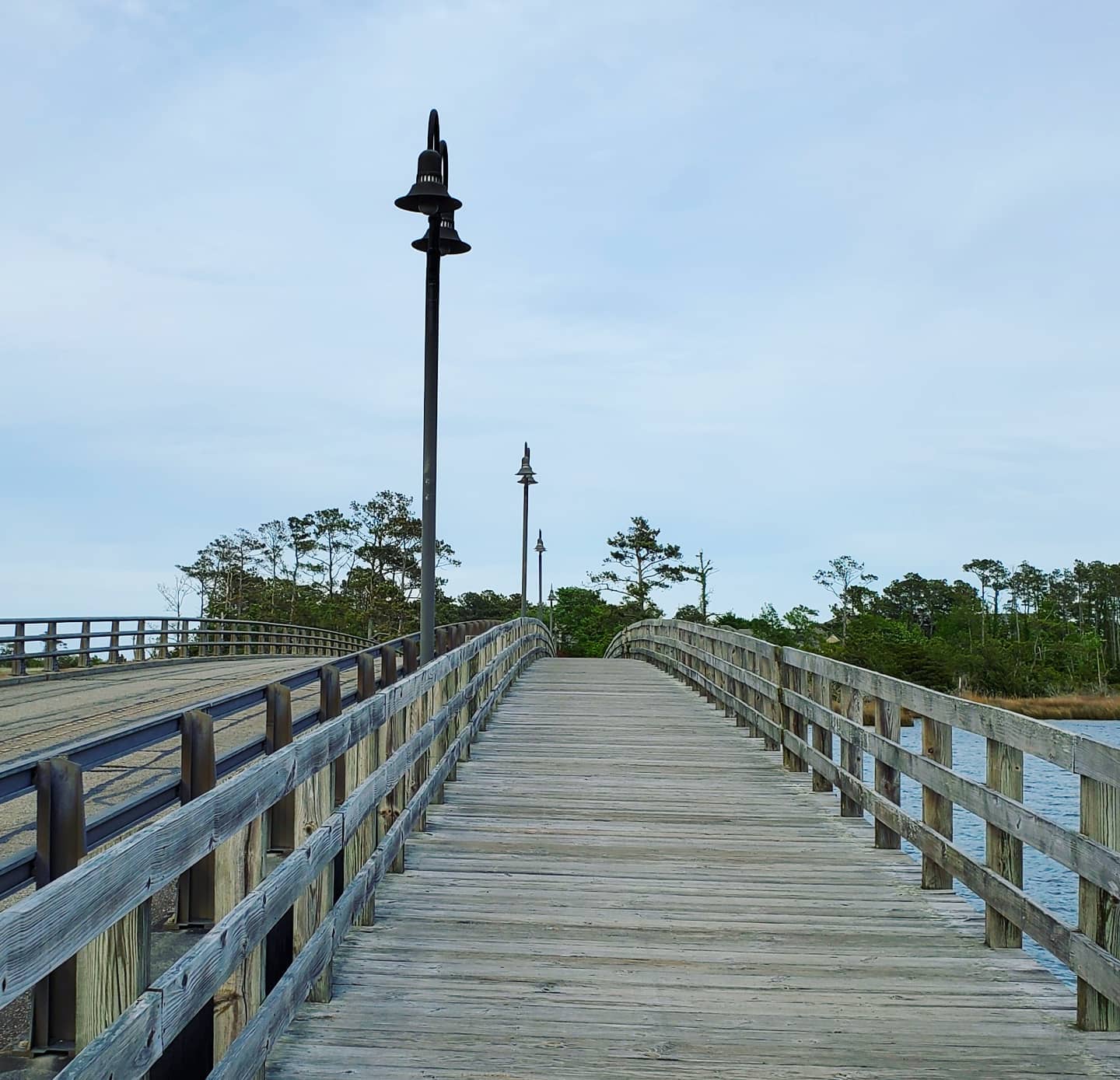 Festival Park has a living museum about the early Native tribes and colonists of Roanoke Island, the homes they lived in, and displays on how they fished and farmed. Visitors can schedule guided tours, explore the Elizabeth II, take duck hunting lessons, learn about lighthouses, pick up souvenirs in the gift shop, and many other activities.

Unfortunately the museum was closed that day, but we were able to see a lot of cool things just wandering the grounds.

Along the edge of the parking lot, we found this wooden boardwalk that led us around the island through the marshes of Shallowbag Bay. It was fun and a little spooky. We saw so many types of birds and plants I did not recognize.

Manteo’s most popular feature is the Roanoke Marshes Lighthouse and mini museum. Unlike most lighthouses, it has a very small fixture atop a very small cabin, but it does its job just as well as all the skyscraper lighthouses we visited along the Outer Banks.

Locals pride themselves on getting their weather reports by reading the flags on one of the last remaining US Weather Bureau Towers. The thin, wiry metal structure stands by the boardwalk leading to the lighthouse and it is accompanied by an exhibit about various flag combinations and meanings.

The George W. Creef Memorial Park, also known as the Manteo Waterfront Park, surrounds the lighthouse and other features. Children like to splash around in this small inlet even more than they enjoy the playground across the lawn.

Attractions in Manteo are so low-key that we almost missed the Roanoke Island Maritime Museum.

The Roanoke Island Maritime Museum and George W. Creef Boathouse are dedicated to the memory of this local ship builder and entrepreneur. He is credited for building the Shad style boat and his family ran a few other businesses in the area back in Manteo’s early days.

There were not many people out and we enjoyed having this charming, impeccably clean town to ourselves. Shops are neatly tucked into residential style buildings, and patio gardens on every corner beckon you to sit and chill for a while.

One could say it looks gentrified here, but this has kind of always been Manteo’s style. I prefer places with locally-owned economies, and was pleased about not seeing any chain businesses nearby.

The Lost Colony Brewery across from Poor Richard’s is known worldwide for their award-winning craft beer, which can be found nearly everywhere in the Outer Banks. I can personally vouch for the quality of their Kill Devil Hills Scotch Ale and Kitty Hawk Blonde Ale.

Be sure to visit Outer Banks Distilling and Vineyards on the Scuppernog to taste some more local brews.

Manteo guides boast that this town has more B&B and boutique inns than any other in the Outer Banks, and we were so tempted to extend our trip another night.

The Historic 1904 Dare County Courthouse is now the home for the Dare County Arts Council and gallery. The council’s ongoing exhibits, events, classes, and other programs have been enhancing the community for decades.

A few more interesting facts about Manteo I must mention:

When Unionists took over Roanoke Island after the Civil War, they set up a Freedmen’s Colony and helped former African American slaves start their new lives. Be sure to visit the Fort Raleigh National Historic Site to learn more and view additional exhibits about early Native American and colonist life on Roanoke Island.

Pioneer Theatre is reportedly haunted by long departed members of the George W. Creef family that have owned it since opening in 1918. The main objective of the Spirits here is making sure no one has their phone out or talks during a film. Patrons have reported an unseen entity slapping cell phones out of their hands. If that is a hoax, it is a clever one to keep rude filmgoers from ruining everyone else’s night.

The Roanoke Island Inn is also notorious for its hauntings, in this case by its original owner Roscoe Jones. He reportedly passed away from grief and heartache after isolating himself inside the inn, shortly after being released from his position as town postmaster. 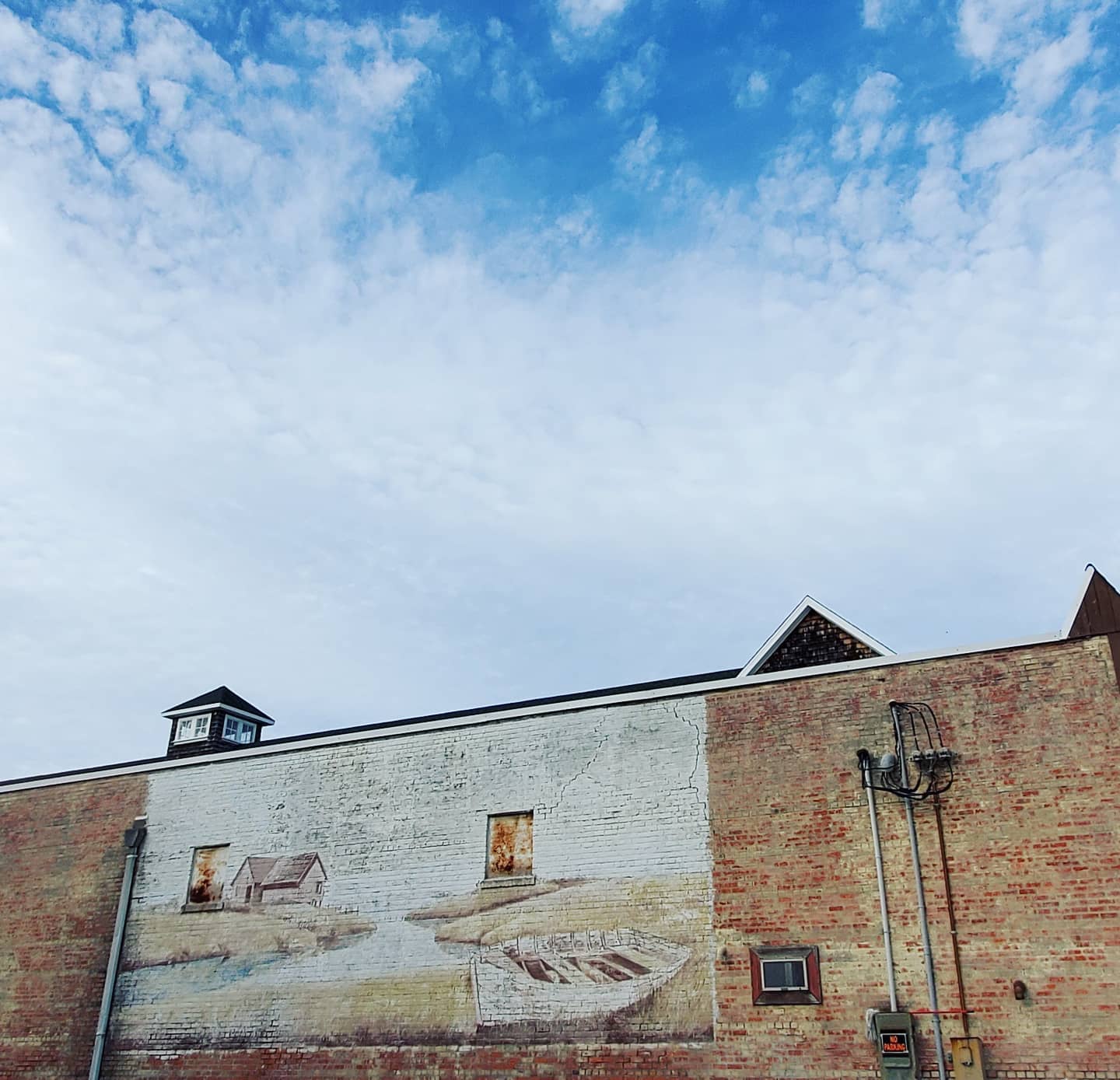 Andy Griffith owned a 70-acre estate in Manteo, a quick walk from The Lost Colony stage, until his death in 2012. Griffith’s first professional acting role was in The Lost Colony during the 1940s and that is how he met his wife Cindy. He died at home and was buried on this private estate.

After his death, Cindy had another home he owned in Manteo torn down, which caused a huge controversy. Family and friends said Griffith always thought of Manteo as his very own Mayberry town, and they had anticipated the secondary house would be turned into a memorial or museum dedicated to Griffith’s legacy.

I was absolutely pained that we did not have time to visit the Elizabethan Gardens but I hope to return soon and visit Island Farm, Pea Island Cookhouse Museum, the Alligator River National Wildlife Refuge, and to catch the New World Festival of the Arts and Dare Day festivals.

In the area for a while? Follow me along the Outer Banks to Kitty Hawk, Hatteras, or Ocracoke!

© Copyright Fernwehtun, 2015- Current. Unauthorized use and/or duplication of this material without express and written permission from this site’s author and/or owner is strictly prohibited. Excerpts and links may be used, provided that full and clear credit is given to Fernwehtun and Fernwehtun.com with appropriate and specific direction to the original content.

2 thoughts on “Manteo and the Lost Colony of Roanoke”