If you missed my last blog about the Moravian village of Bethania, Moravia is the easternmost of three historical territories in the Czech Republic and it dates back to the Holy Roman Empire. Political developments in the early 1900s all but erased the Moravian national identity that is as large and comparable to that of the well-known Bohemians.

Speaking of Czech composers, my song for this blog is “Noon Day Witch” by one of my favourites, Antonín Dvořák:

Just like the nearby Bethania and Old Salem communities, Bethabara was founded in the early 1750s by Moravians who immigrated to the United States after being exiled from Moravia. They were seeking religious freedom, opportunities to evangelize, and land to support their families.

At first they settled in Savannah, Georgia or in Bethlehem, Lititz, and Nazareth, Pennsylvania, but by the 1750s the main hub was in what is now Winston-Salem, North Carolina. 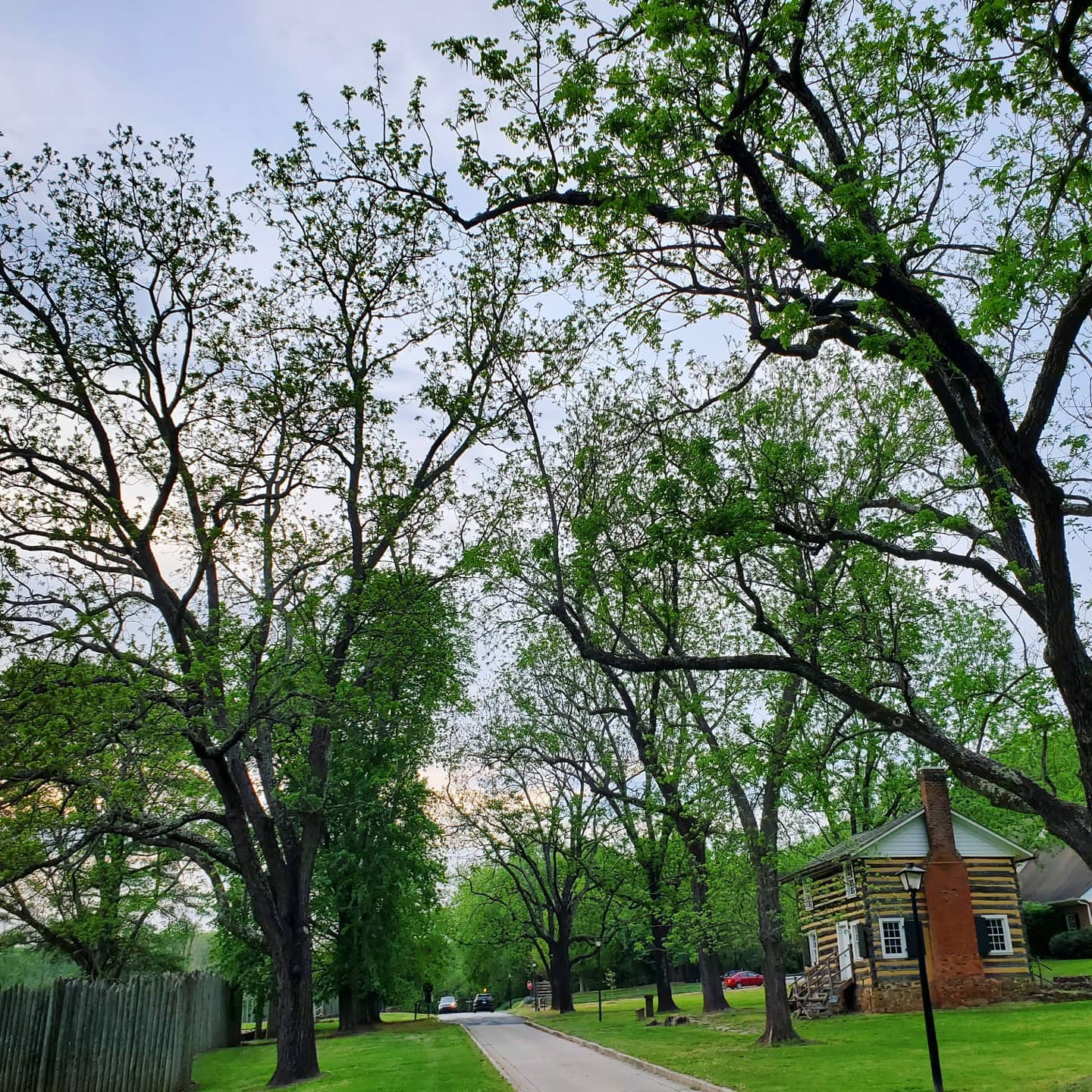 Bethabara was the first European settlement in the piedmont, or foothills, region of North Carolina. The 183-acre village has been developed into a living museum and is a registered National Historic Landmark.

Download this walking tour map and explore at your own pace, or schedule a tour with the visitor center.

The Visitor Center has a museum and gift shop where you can scour the archives, study the tools and trades of the Moravian world, and even learn about the history of enslaved people in Bethabara.

After a collection of records was found documenting the ownership of slaves and some very backward views held by 1700s-era Moravians, church leaders formally issued an apology for their wrongdoings and have beefed up their good intentioned mission work to support vulnerable people in the nations whose people they once exploited.

The restored Log House was built in 1834 and was standard Moravian family home of that period. Decades later, it was owned by a family who had modernized it, but the house was converted back to its original colonial style in the 1960s.

I presume it has been uninhabited ever since the conversion and the multiple archaeological digs which produced many artifacts and relics displayed in the museum.

The Brewer/Distiller’s House was built in 1803 and undoubtedly supplied the old Bethabara Tavern that sits in ruins behind the Community Medicinal Gardens.

The Potter’s House was built in 1782 and is one of four sites connected to the creation, firing, and selling of pottery in this village. Across the street you can see foundation remnants of the three others, all indicated on the walking tour map. 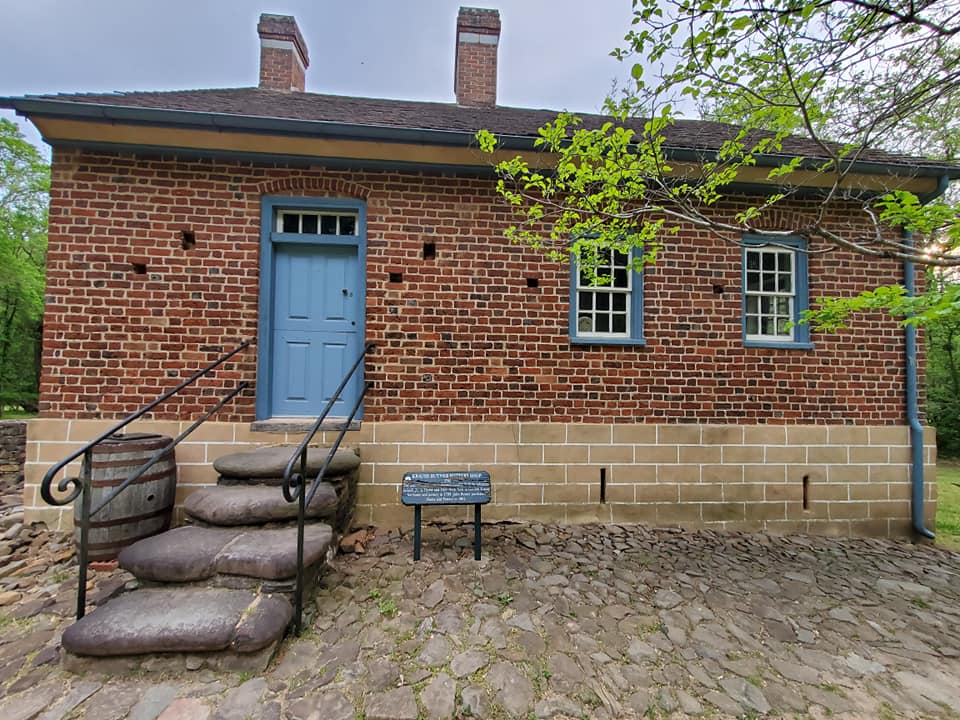 Gemeinhaus was built in 1788 and has the distinction of being the oldest church attached to a residence that is still standing in the USA. Gemein is the German word for common, and this building was sort of a catch-all public house turned house of worship.

Moravian followers congregated here for religious ceremonies, medical services, meetings, and important events. Behind the Gemeinhaus you can see remnants of the apothecary, doctor’s lab, and a woodshed.

The reconstructed French and Indian War Fort partially surrounds the park, just enough to give visitors a glimpse of what it was like both inside and beyond the towering fortress walls.

I have seen this exact fortification style of sharp wooden pikes at Fort Loudon State Park in Vonore, Tennessee, also constructed during the French and Indian War. 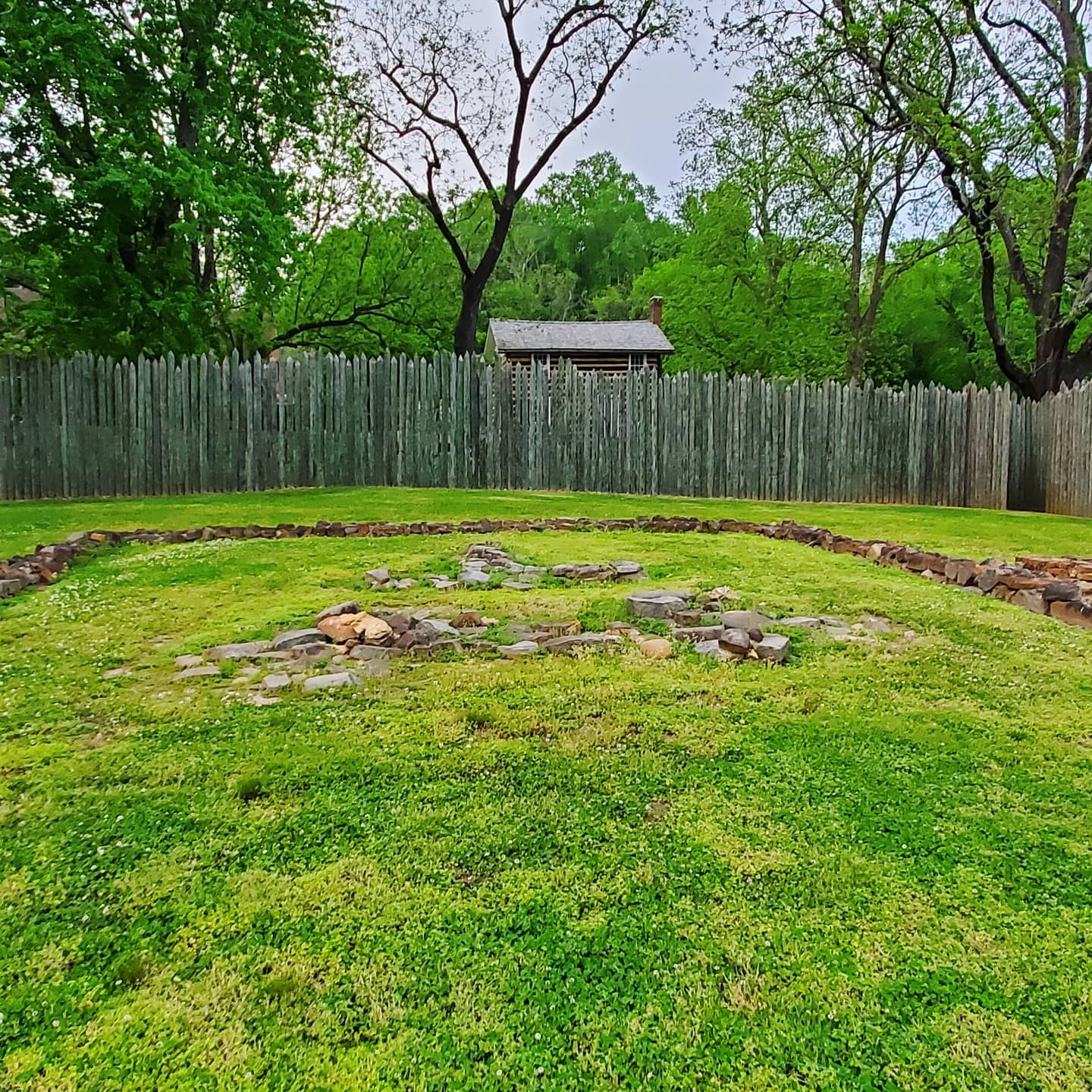 The Community Medical Gardens were reconstructed from a 1759-era map, and the garden is still alive and fruitful. 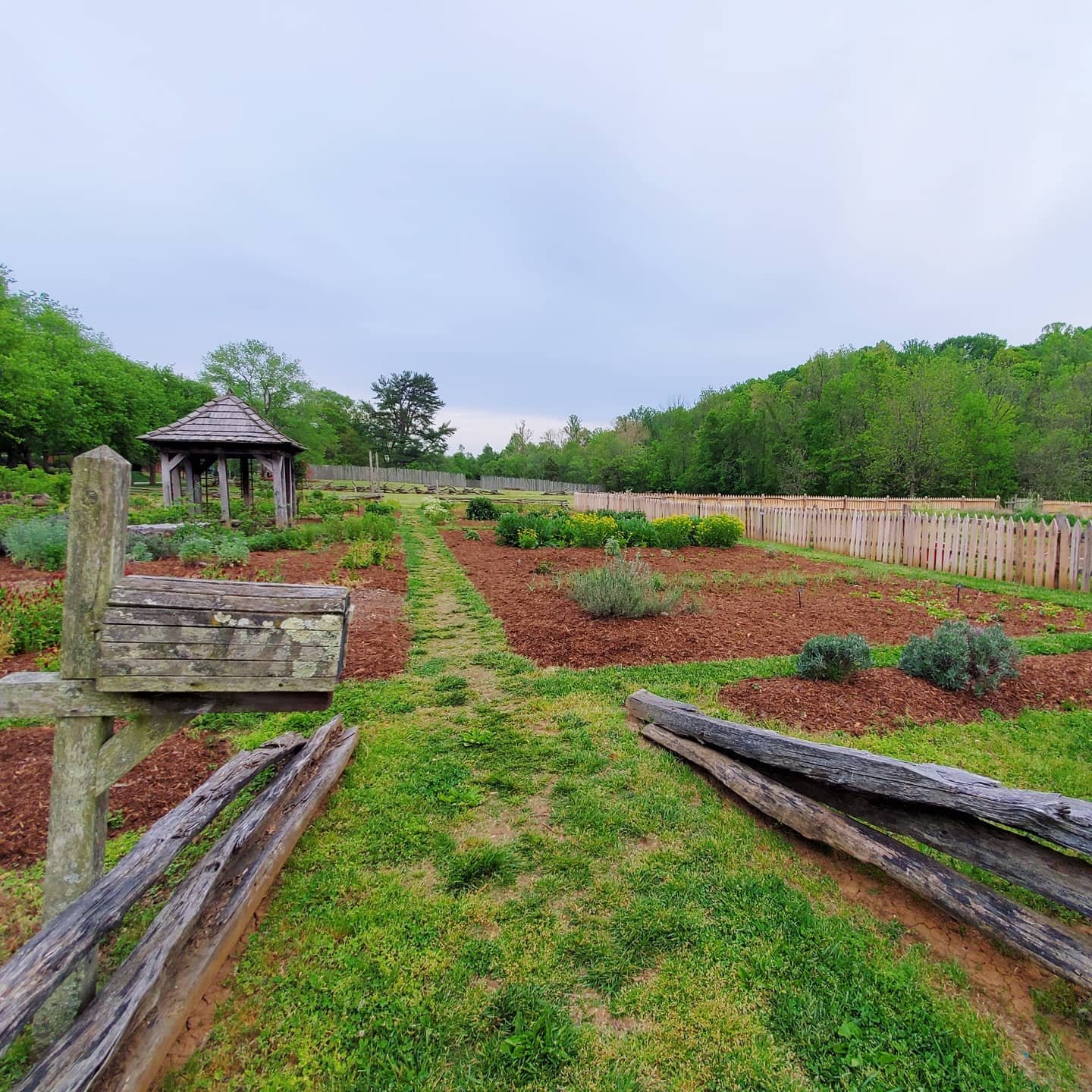 Adjacent to the gardens you can visit a replica of village homes, cow houses, sleeping halls, and other types of lodging commonly used in the 1750s. These structures were as crude and rustic as one would expect to find in an old rural agriculture village. 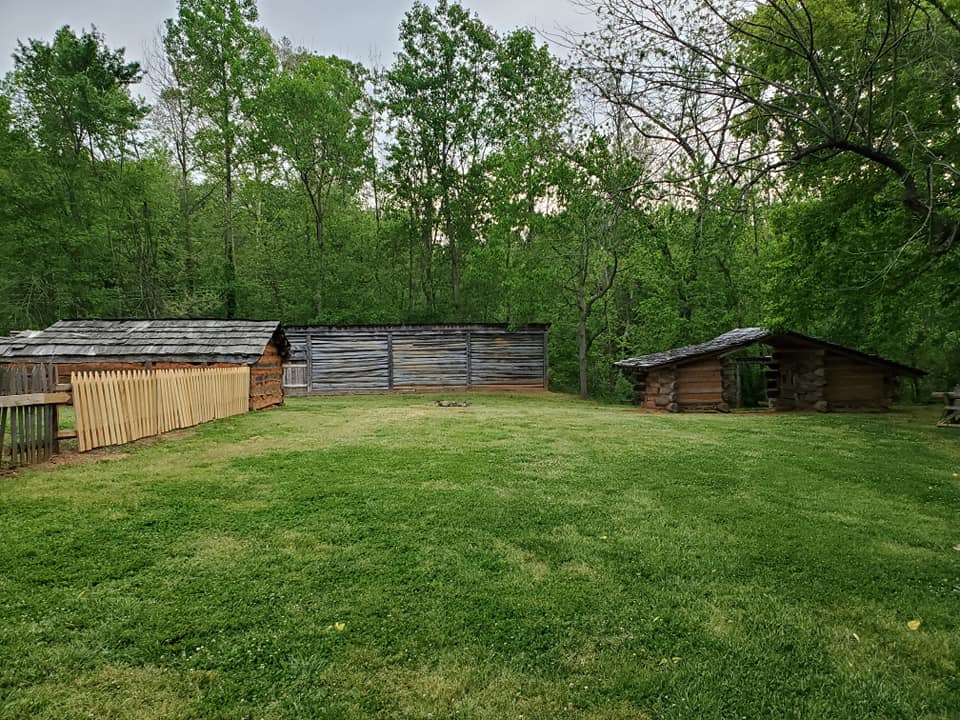 Moravian cartographer Philip Christian Gottlieb Reuter is credited for designing Bethabara based on a hand-drawn sketch of the Moravians’ homeland in the Czech Wachovia region. Reuter also designed the village of Bethania. His attention to detail served his community’s practical needs and has given us invaluable insight on early Moravian history and daily life.

Most of the structures still standing in the park were built between the 1780s and 1830s. So many have been removed or torn down, but you can see remnants of the stone foundations.

The fortress wall has an opening that connects you with several walking trails, albeit lacking in signage. The most popular trail leads to Bethabara’s God’s Acre, a specific type of graveyard reflecting Moravian burial rites.

Moravians bury their dead in uniform grid patterns under flat, square, white marble gravestones. You will not find any headstones, monuments, or mausoleums in a God’s Acre.

Instead of grouping bodies together by familial bonds, they are divided and buried according to their sex and age at time of death. The intent is to express that in death all people are equal before God, and should spend the afterlife accordingly. Under that logic, I am not sure why they bother to divide the bodies at all.

We opted to visit the Salem God’s Acre instead, as pictured below. 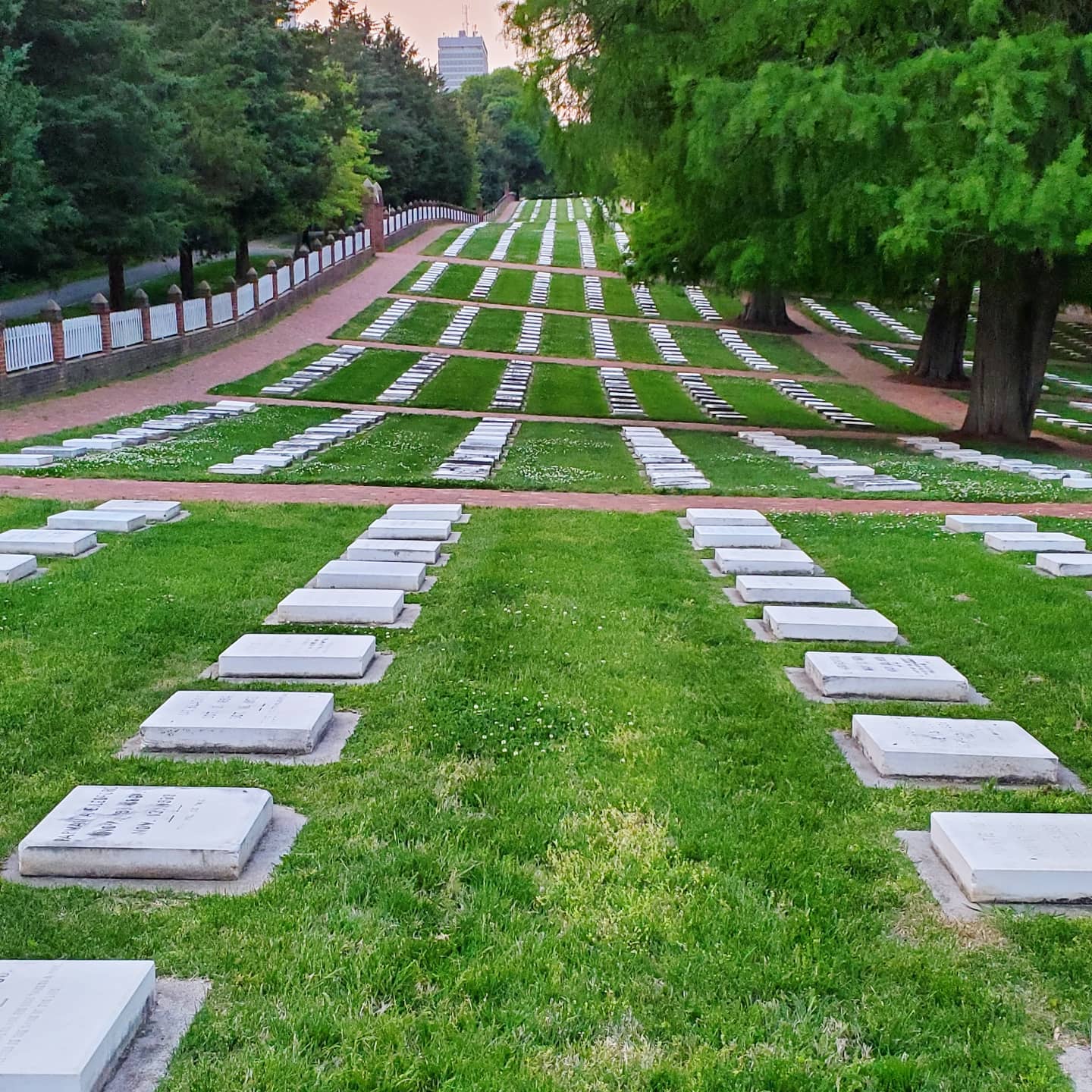 Each Moravian church has their own God’s Acre of varying size unless the church is in an urban area with no land, or if the church members agree to bury their dead in a remote God’s Acre for other reasons.

I plan to visit more of Old Salem next time I am in Winston-Salem but the lesser-known Bethania and Bethabara were calling me.

In the area for a while? Follow me to Bethania!

© Copyright Fernwehtun, 2015- Current. Unauthorized use and/or duplication of this material without express and written permission from this site’s author and/or owner is strictly prohibited. Excerpts and links may be used, provided that full and clear credit is given to Fernwehtun and Fernwehtun.com with appropriate and specific direction to the original content.