Porchfest started in 2007 in Ithaca, NY as a totally resident-owned and operated music festival, and it has spread to over 130 other cities in the USA and Canada since.

Care to start one in your town? The organizers have thoughtfully put together some info you can find here.

Maybe I will add that to my already rather ambitious To Do list. 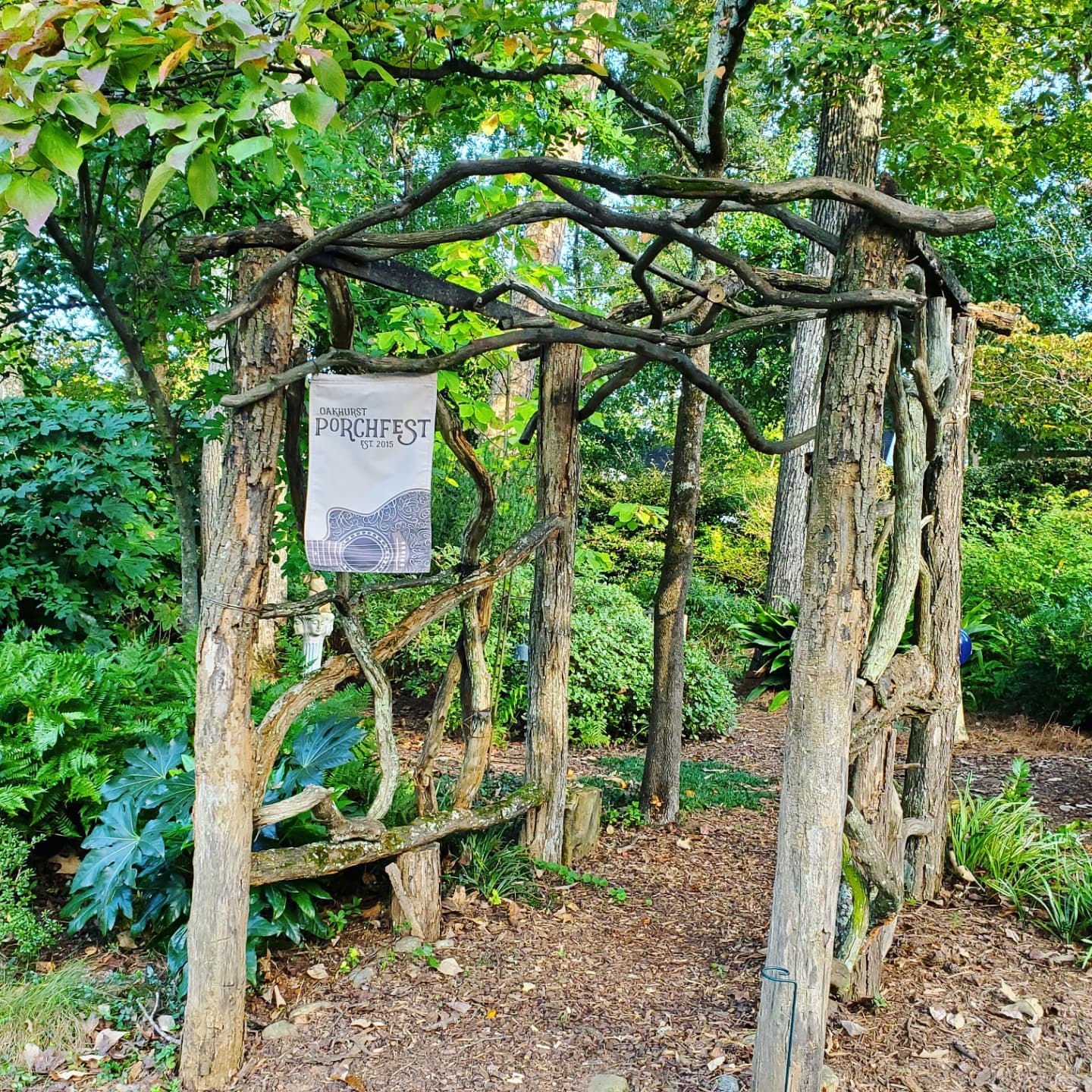 Organizers bill the festival as a “a grassroots community music spectacle… where front porches become stages, yards become venues, and radical generosity and good will rule the day… there’s no real boss, no specific enclosed or protected area, and everything you see, eat, or experience exists only because someone decided to step up and make it happen.“ 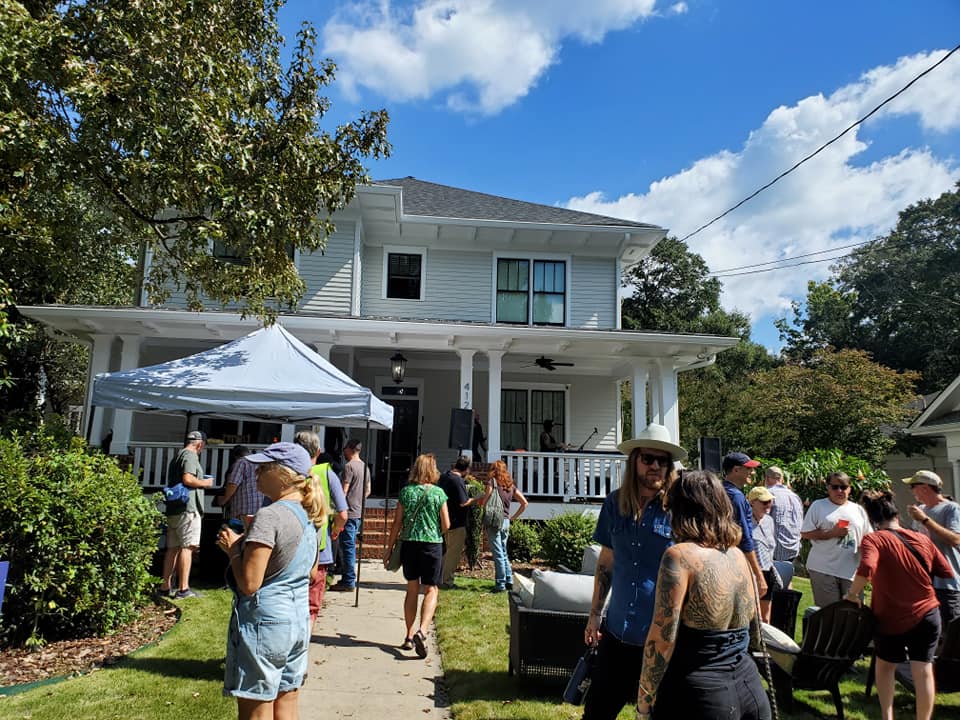 There will be no designated song for this entry, as it is full of music links throughout. 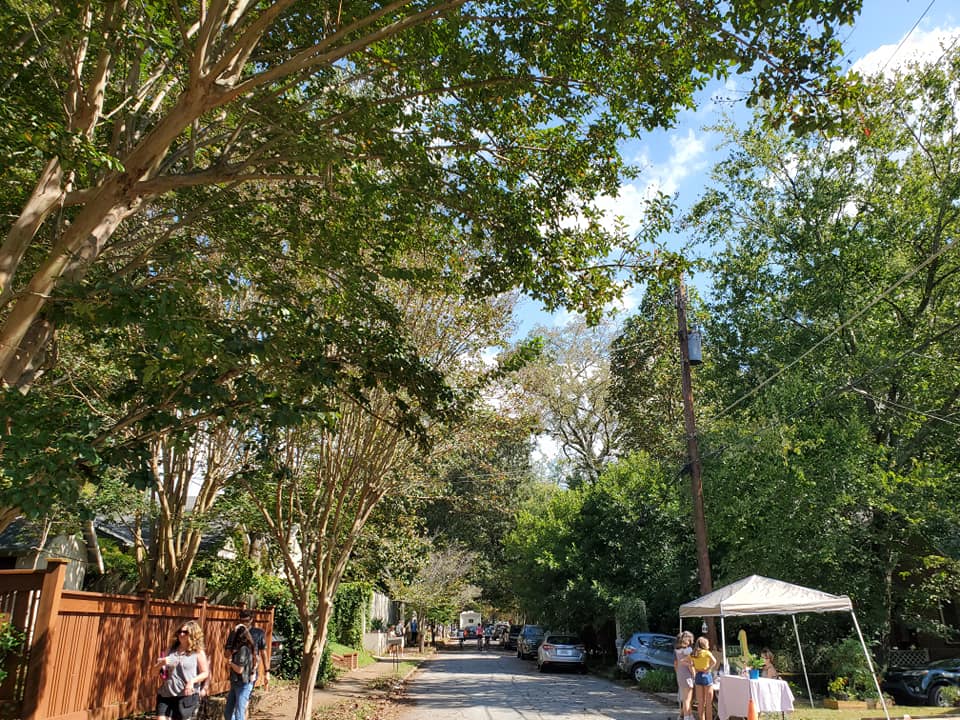 Oakhurst Porchfest is hosted by the Decatur Arts Alliance in partnership with the city’s police department and sanitation workers.

Some say it was created to fill the void of a different event in Decatur that used to take place in Harmony Park but was called to an end when the park went under renovations. 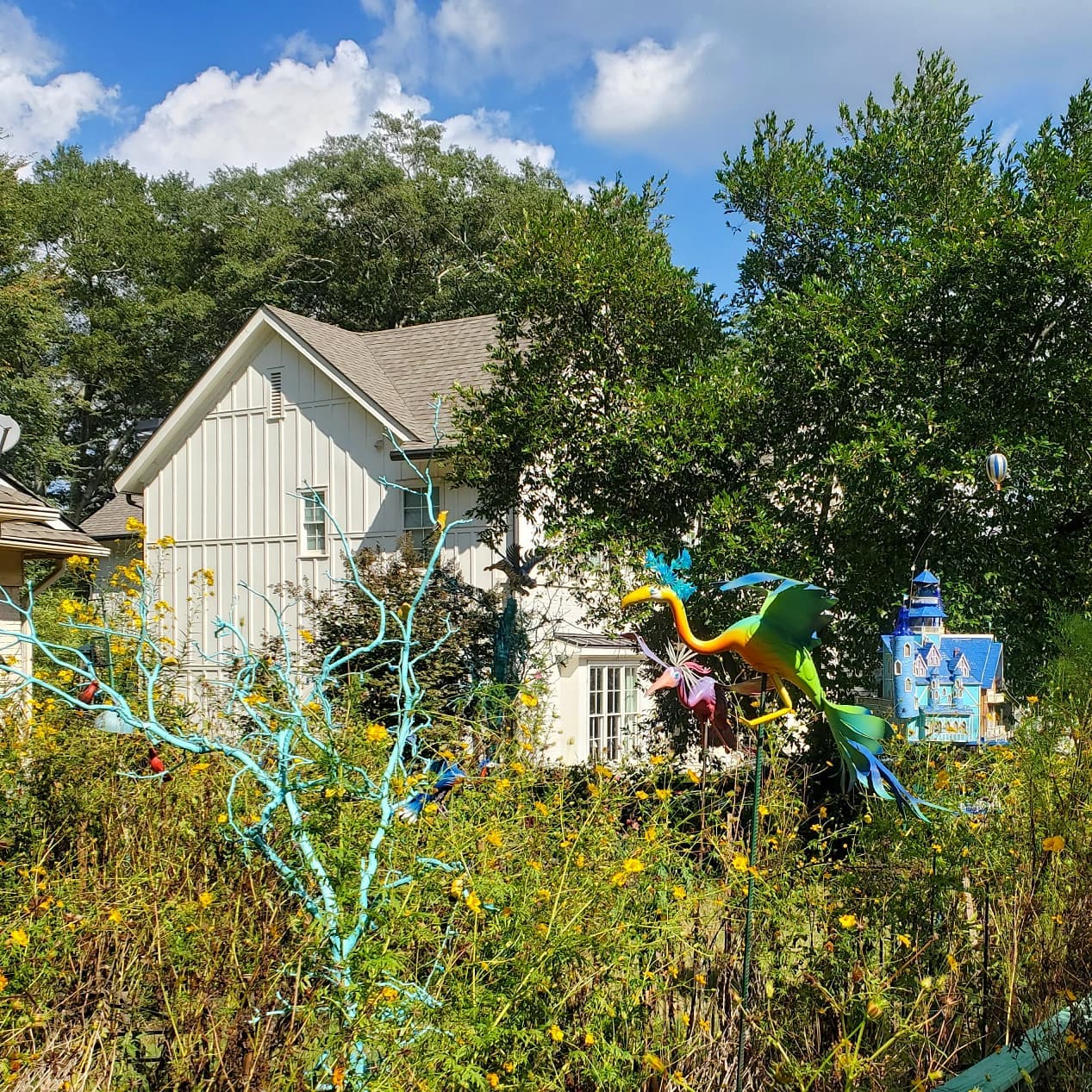 The Oakhurst neighbourhood is located in SE Decatur and is a suburb of Atlanta. It is historic with large homes, wide porches, huge yards, broad streets, lots of wildflowers, and gardens. 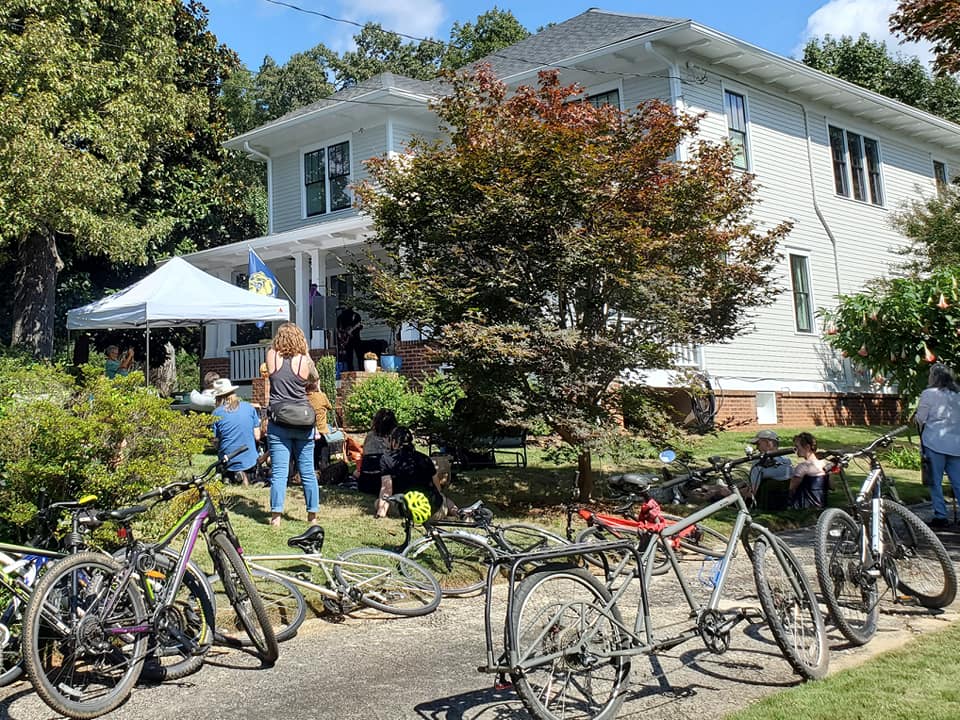 Most events fall within the Oakhurst boundary, primarily of Winter Avenue to the west, McDonough Street to the east, the blocks south of downtown Decatur and spanning southward to Gordon and Pharr Street.

View this year’s interactive map and schedule lineup here, and check out the print version .pdf below:

Show schedules are grouped in one-hour slots and the ‘hood is small enough that you can hoof it a few blocks to catch a few different acts within each hour.

I did not capture photos of each band we saw, or see each band that intrigued me, but looking them all up afterward has been entertaining. 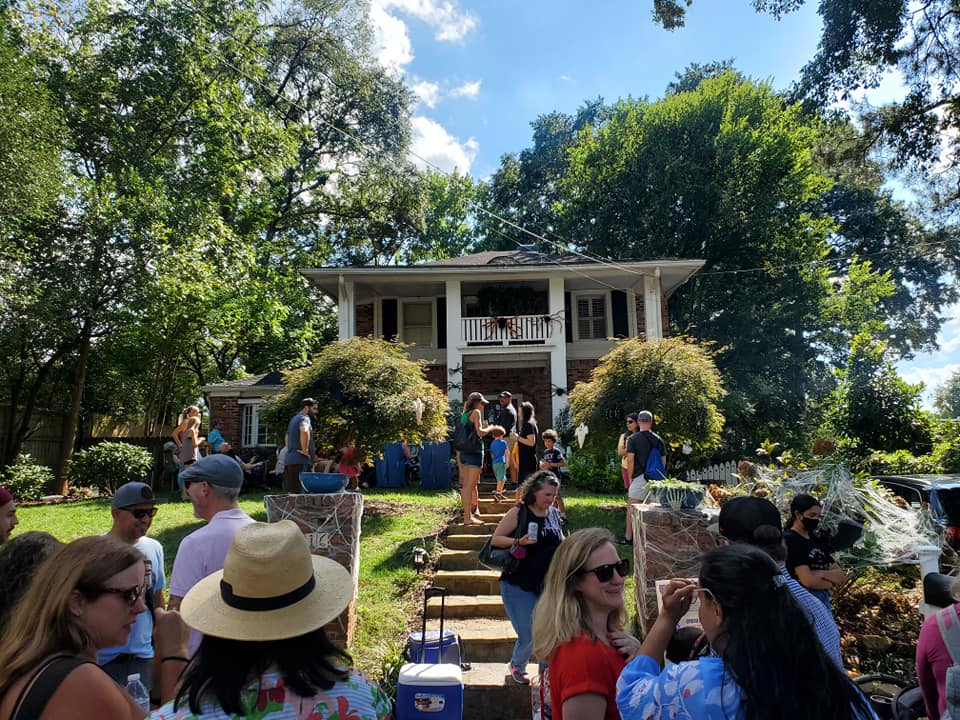 I was visiting one of my best friends in Blue Ridge and she asked me to go to Porchfest on a whim. It turned out to be one of the most fantastic and spontaneous weekends, made even better by getting to see one of my favourite bands, Blood on the Harp.

1-2: Blood on the Harp
This Atlanta-based band played at a house on Adams Street and I was ecstatic. Most of their songs are about death and spooky stuff, combining elements of bluegrass, punk, folk, and Southern Gothic rock among others. 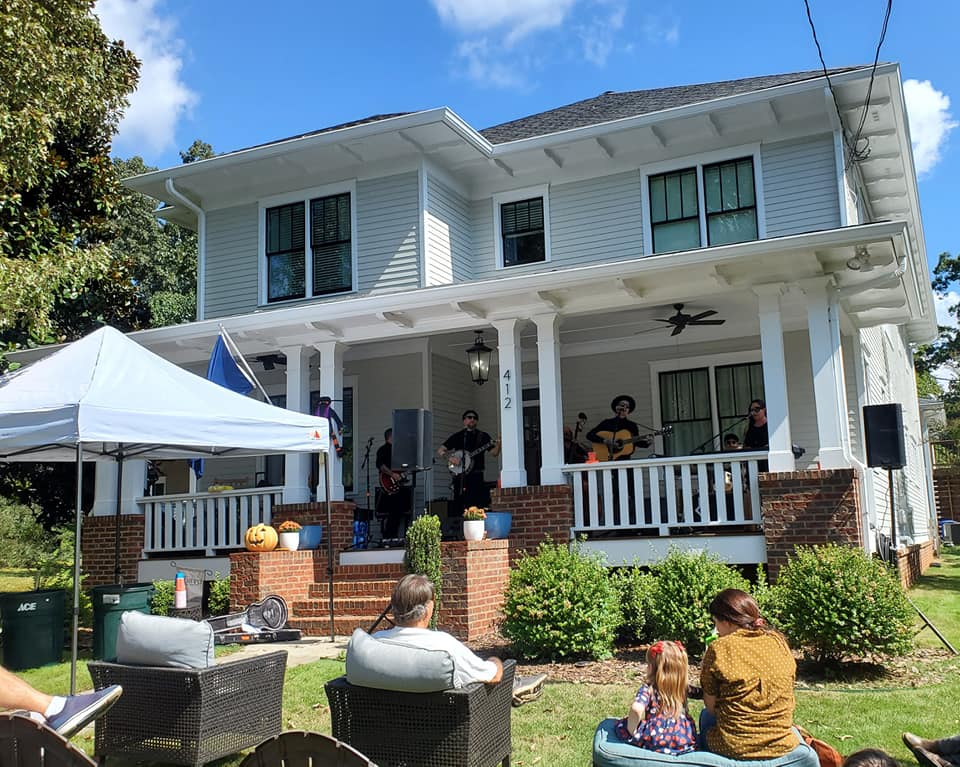 2-3: Chrome Castle
Chrome Castle (Melodic Surf Rock) had a really fun crowd and we caught most of their hour-long set.

They are also from Atlanta with their self-described “cinematic sunny ’60s psychedelic surf with cloudy ’80s post punk melodies.” 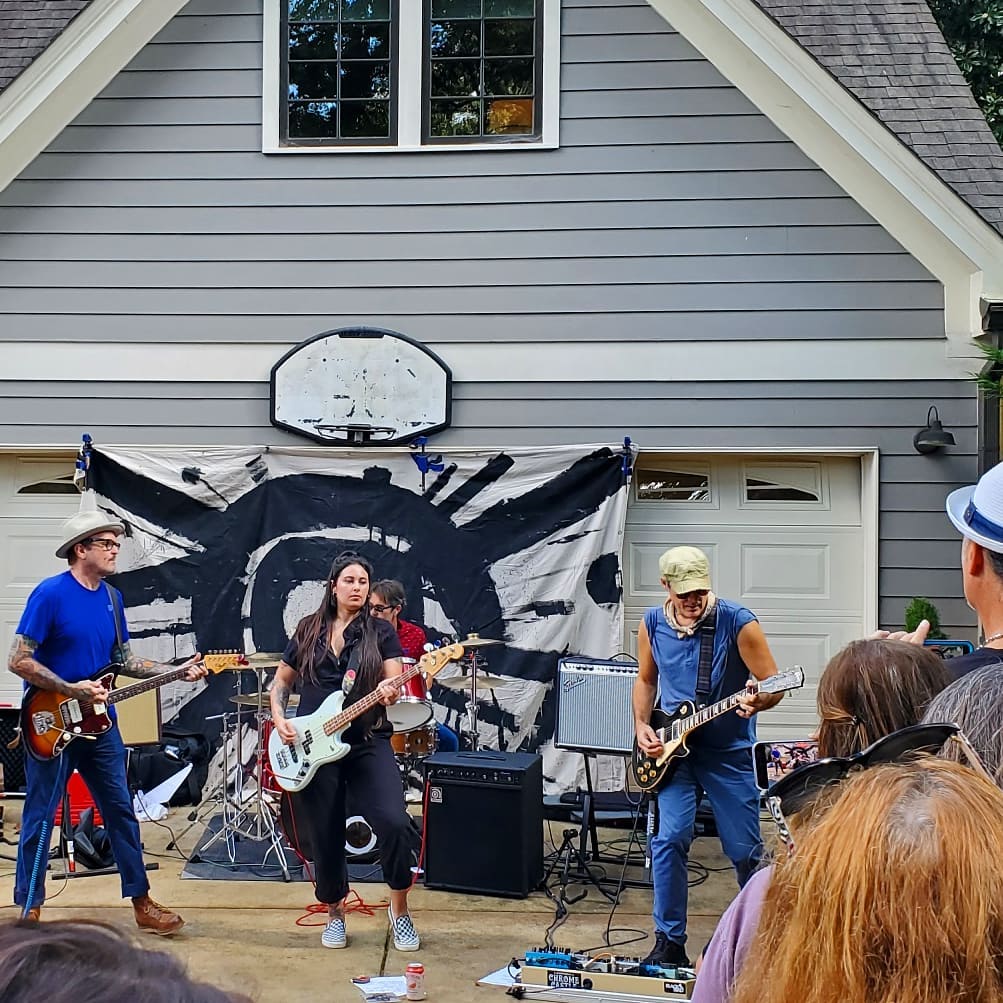 Check out the video for their song “Modern Houses”

Cover bands made up a hefty portion of the talent in this Porchfest but I can get down with that sometimes. 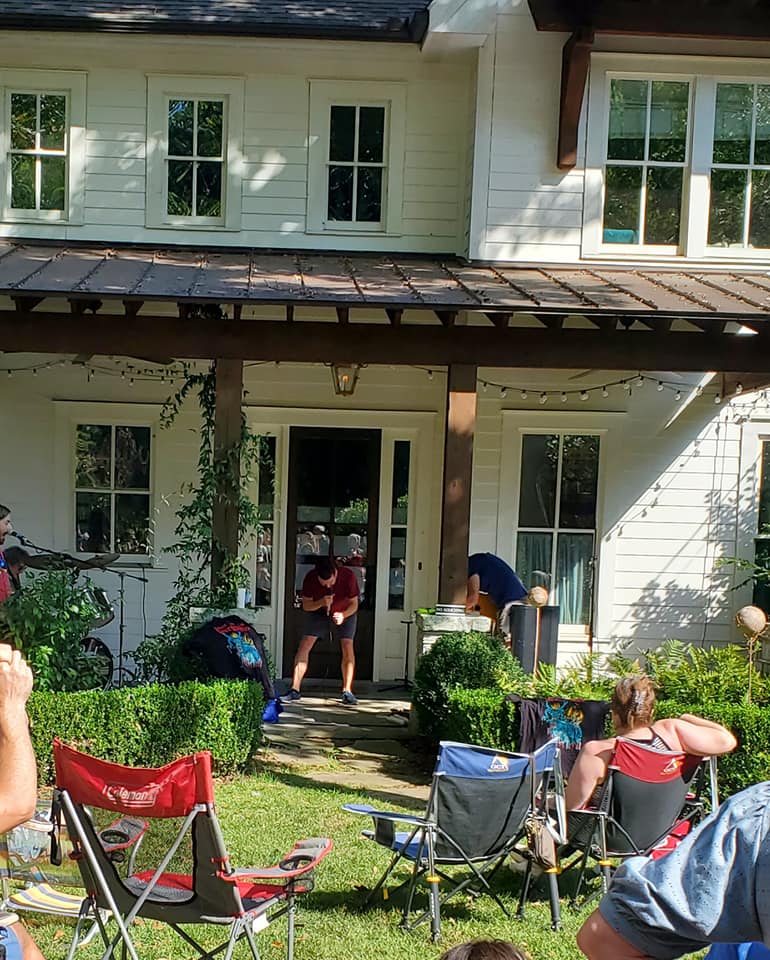 We caught part of another group called Best to Burn, “Atlanta’s most feared a cappella band.” I wish they had gotten better sound support. Some of the members were comedically dramatic as hell. 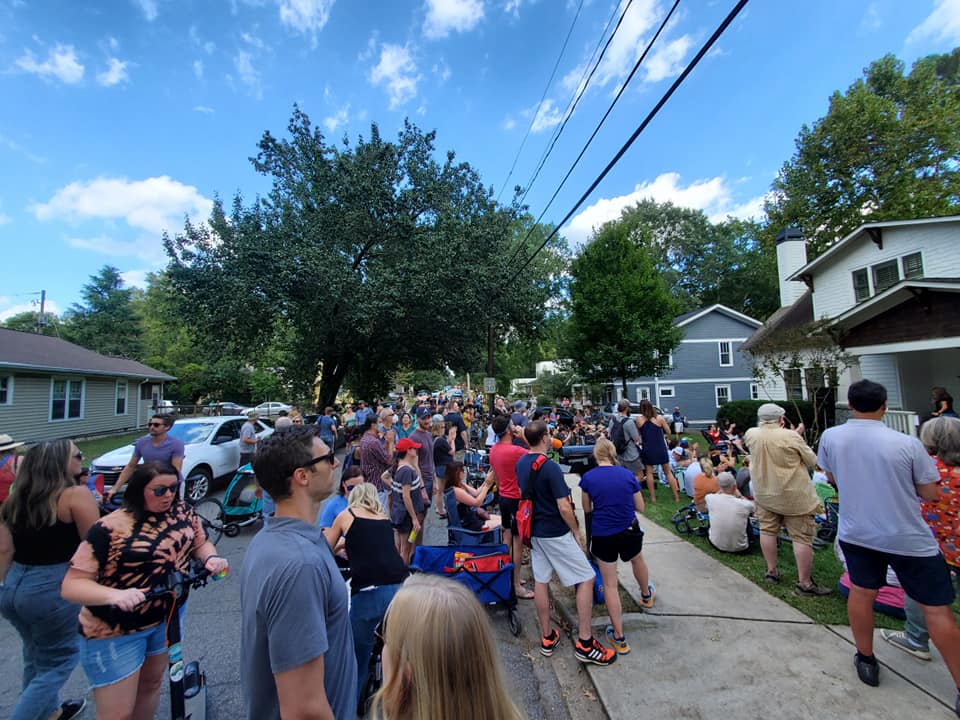 4-5: Lynx Deluxe
Lynx Deluxe (Southern alternative baroque rock) has a cool sound that lured us over. I thought they were an experimental noise band at first but then the distortion made way for some melodic looping.

I wish I knew the name of the song where the singer kept saying “Patagonia” over and over. That one slapped. I really appreciate that they wrote a song about Jane Goodall too.

Update: One of the guys from Lynx Deluxe found my blog and reached out to send me this link. Give it a listen, they are a really cool band.

Another act in this slot that caught my interest was Flamingo Shadow (tropical punk art rock dance) and they are the second of my two favourite newly “discovered” bands from this festival.

I mean, I discovered them as legitimately as Columbus discovered America because let’s be real, Porchfest delivered them to me on a platter. Check out a couple of their songs:

And this one, featured on Adult Swim:

5-6: Blackfoot Daisy
Across the street from Lynx Deluxe, we sat in for a few songs by Blackfoot Daisy (Americana/folk, 3 part harmonies) who covered “What’s Inside a Girl” by The Cramps. The older gentlemen on stage jokingly said they were calling themselves the Gramps for that one, which won me over. 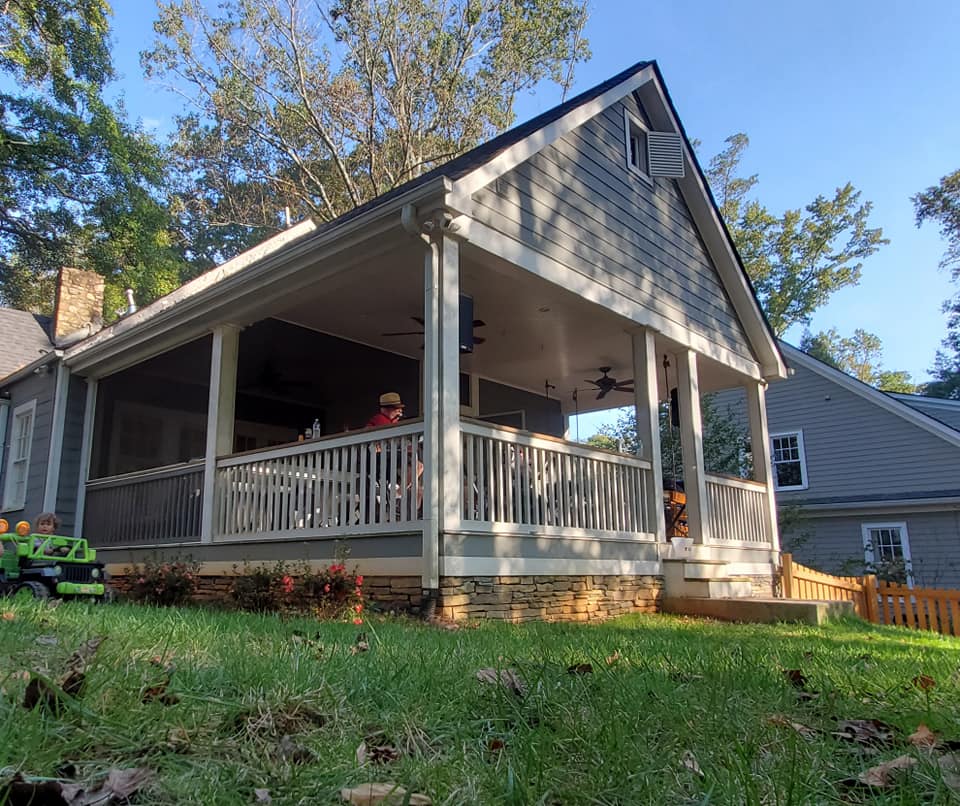 Another free-spirited gentlemen was impressing us all with his dance moves, and we appreciated him so much that one friend made a montage of him dancing to various songs, in his honour and with all due respect.

Among our social circle, it’s become the highlight of our week. Follow me down this glorious rabbit hole by clicking here.

Watch, and prepare to abandon your wits. 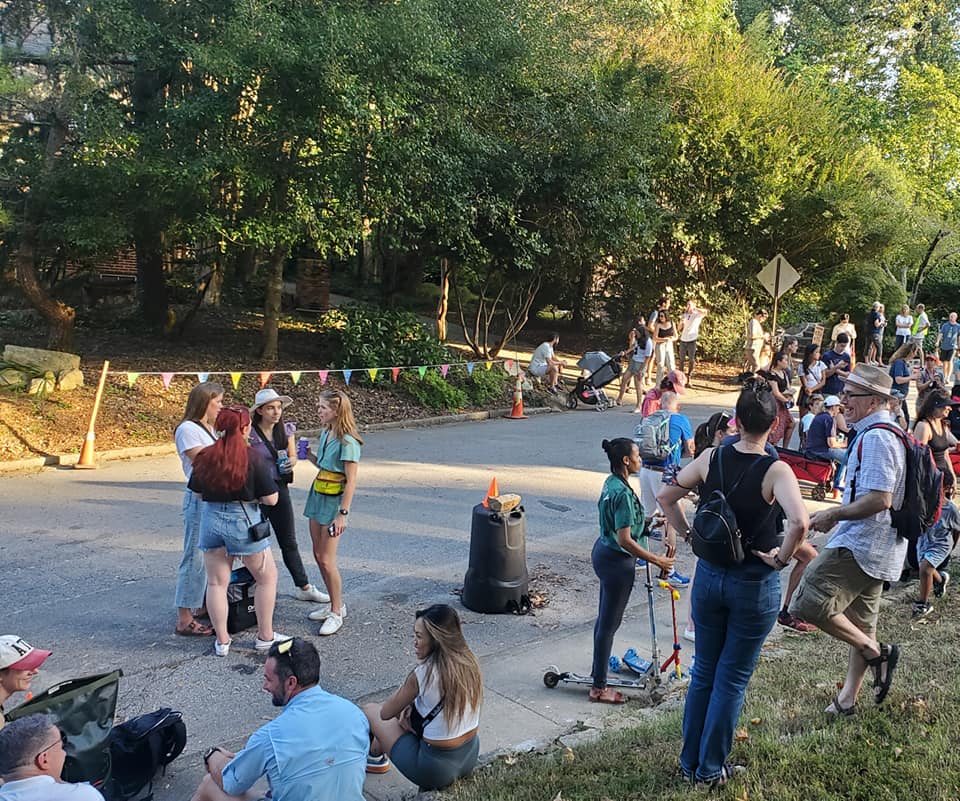 We caught a few songs by Tough Chicken (Classic rock covers) and started making our way to Harmony Park for the event finale, Black Sheep Ensemble. They are my #1 new band from the festival.

I am ENAMOURED with Balkan Brass music and had been hearing little blasts of horns and procession during the whole late afternoon, honing in and tracking them down like a hound. Here is one of their songs: 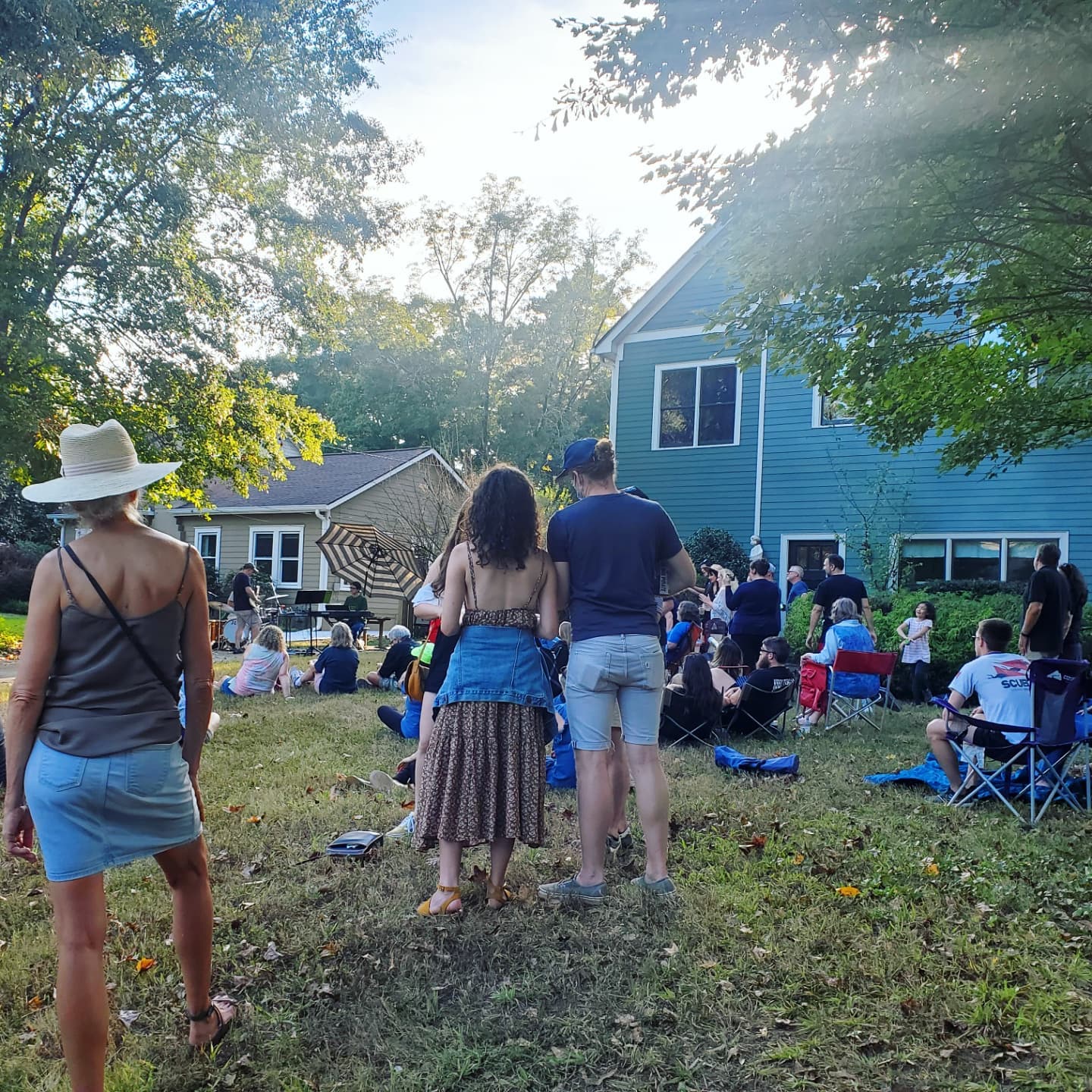 Last but OMG not least, The Bea Arthurs (Golden Girls style rock). Listen to their cover of “Toxic” by Britney Spears:

Weather in Decatur during early October is gorgeous, a little warm, but heavily shaded by the neighbourhood foliage. 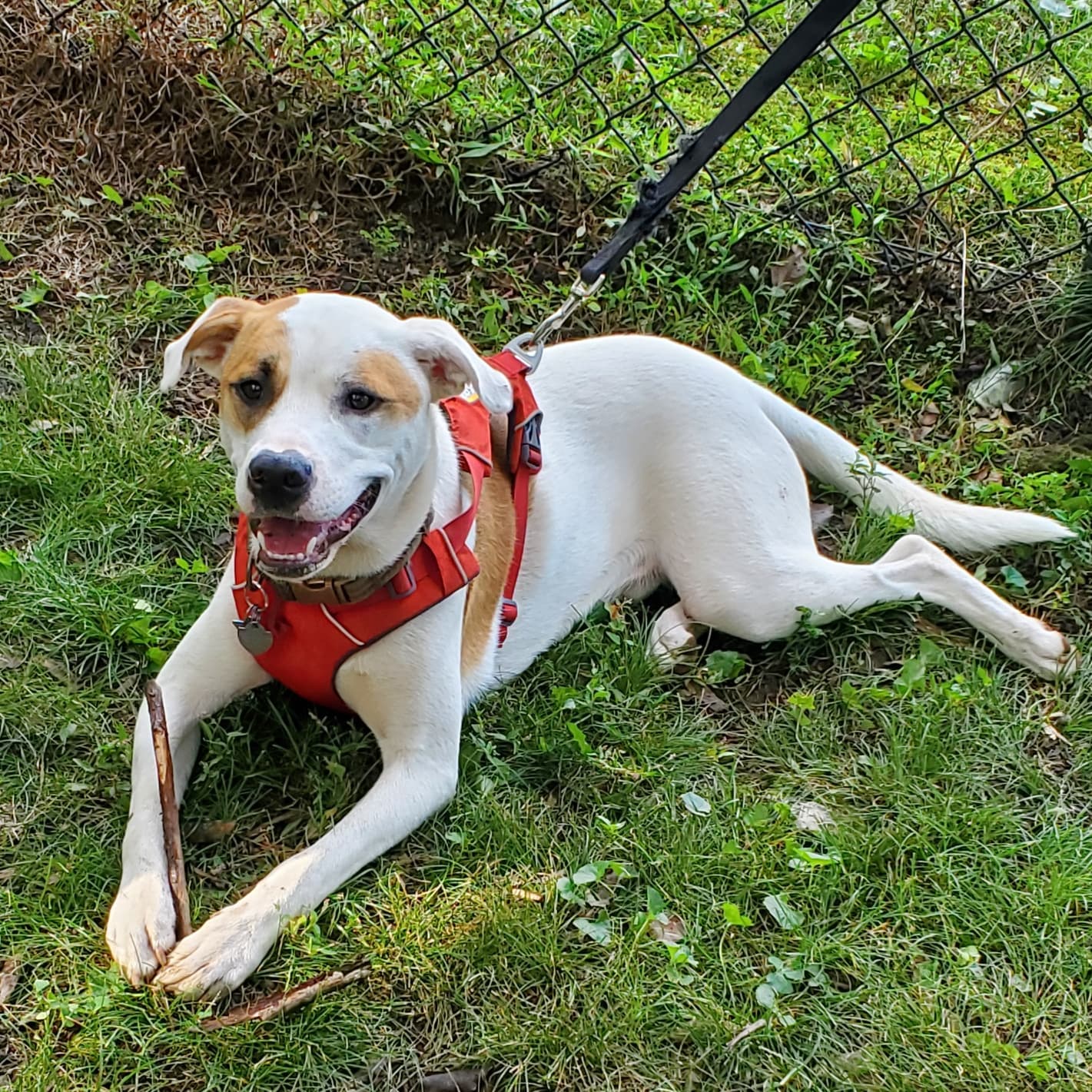 Porchfest is open to everyone, people of all ages, children, dogs, and in Oakhurst it is mostly accessible. 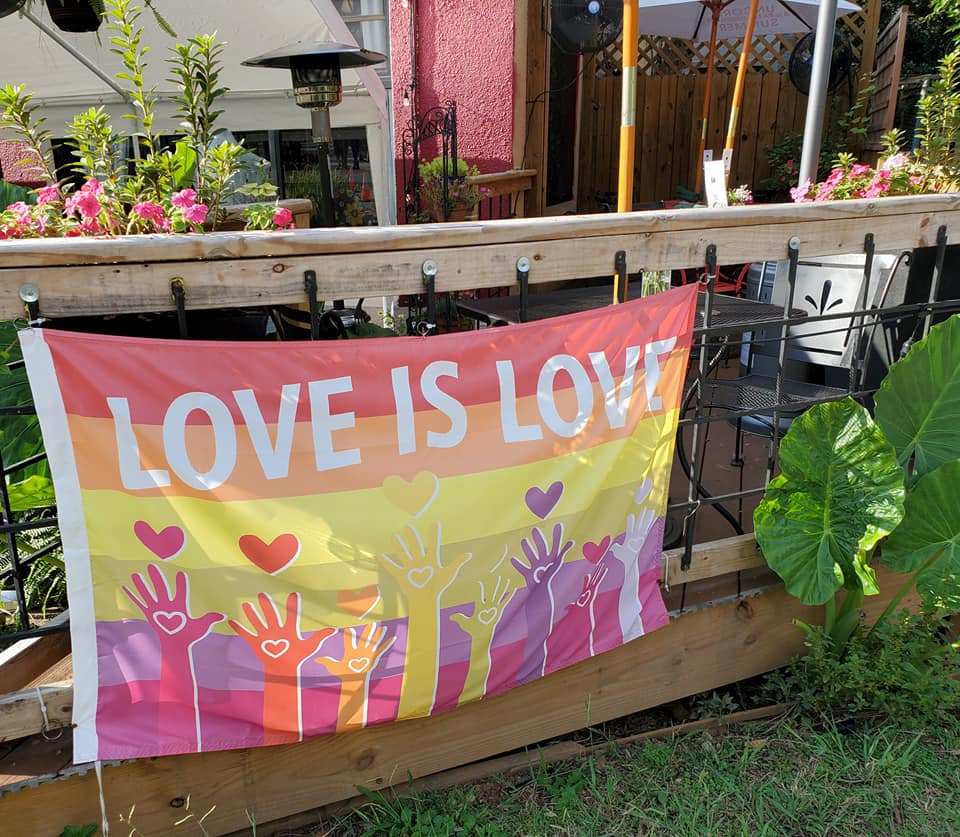 Driving and trying to park at the event is strongly discouraged though. Just take an Uber. Trust me. 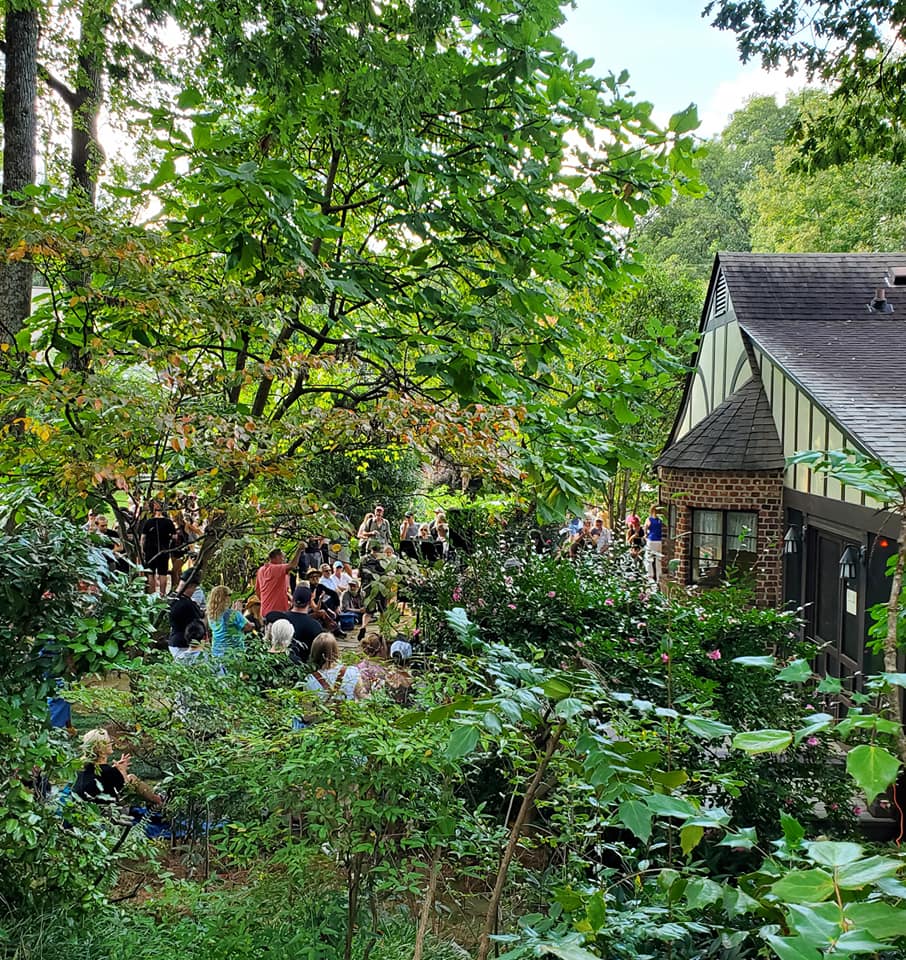 Many of the hosts are super helpful by posting up signs about the band schedules, where you can go, where you should stay out of, and if you are welcome to their kegs and snacks.

No one gets paid here, so be mindful of tip jars, supine hats, and open guitar cases throughout the day. 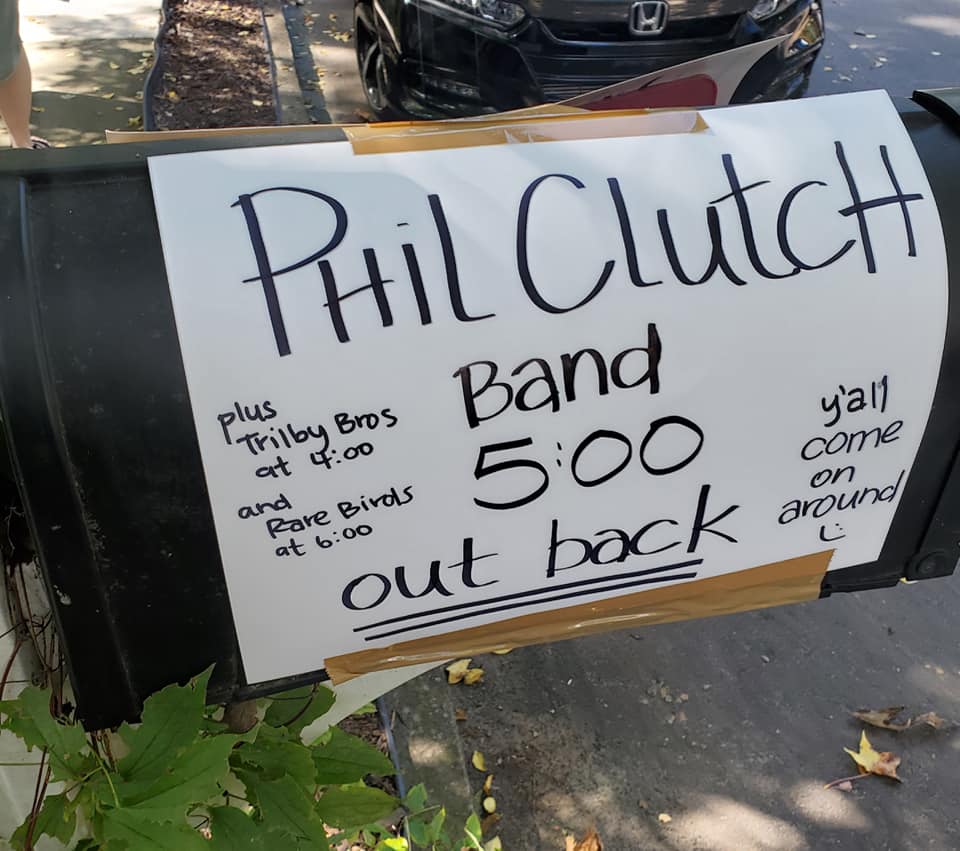 There are several restaurants and pubs in Decatur and Oakhurst, especially surrounding Harmony Park, but we stopped by a festival vendor called WaffleKrewe. One friend tried this savoury waffle dog concoctions. 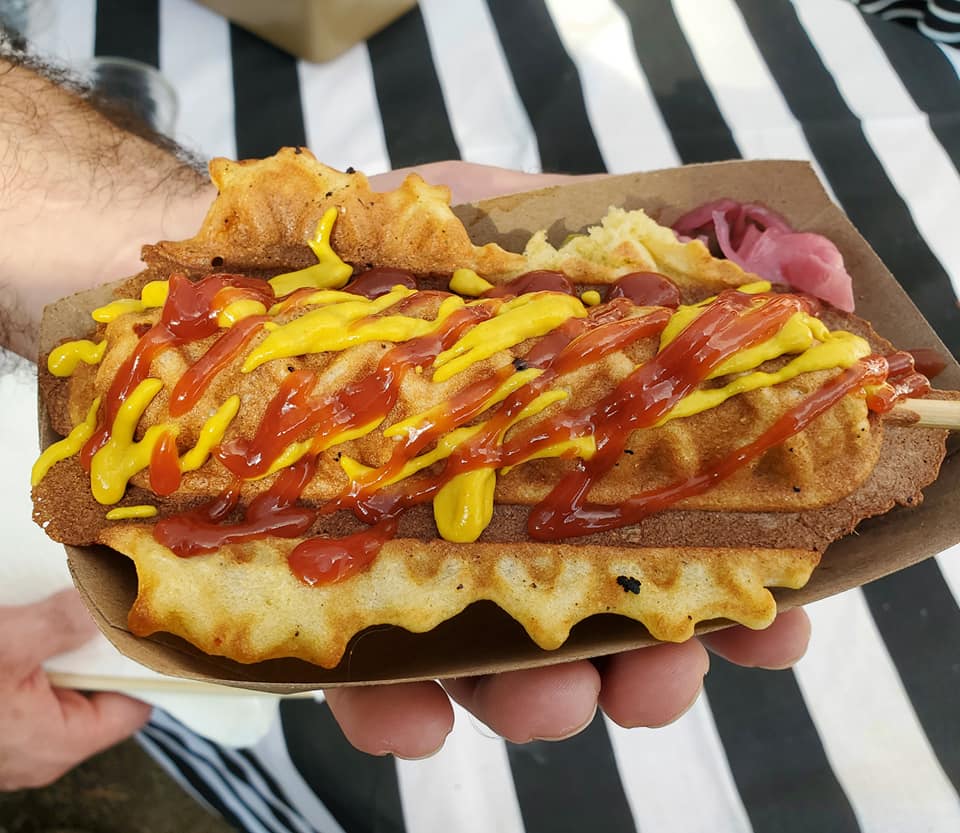 The rest of took out some of these incredible pork and beef tacos at Ford’s BBQ. 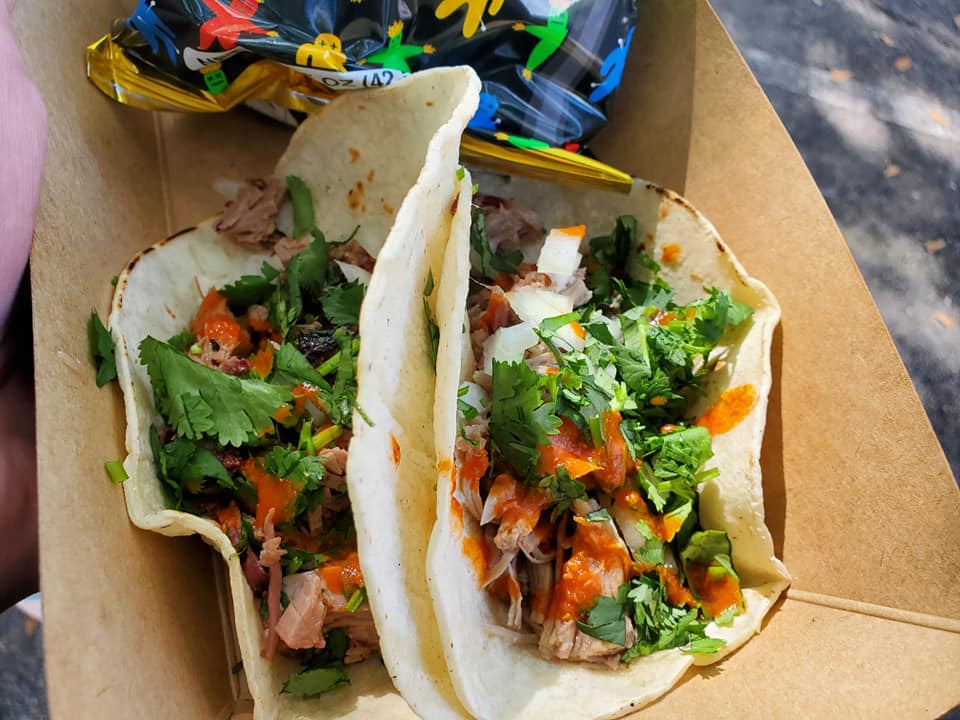 Coinciding with Porchfest was an event called Music & Friends that takes place every second Saturday of the month. This one (if not more in the future), was in Harmony Park. 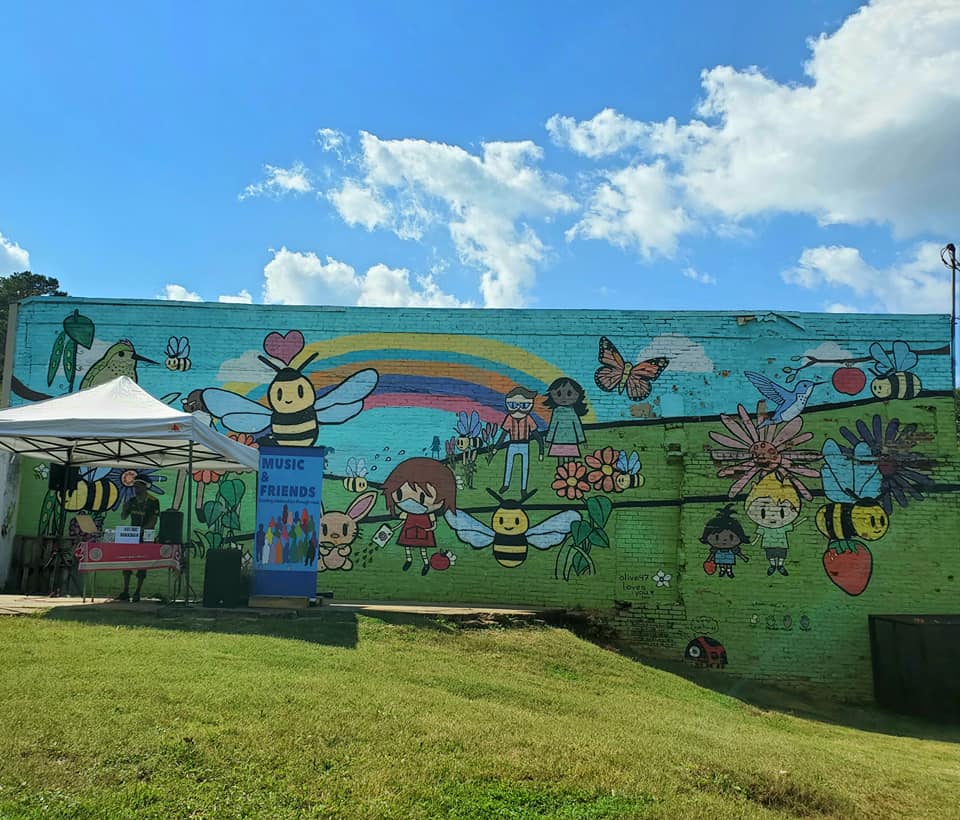 Local artists, artisans, and flea marketers set up booths and tables all around the park. There was a live DJ and people were dancing, dodging skateboarders and hordes of sugar-high kids running around. 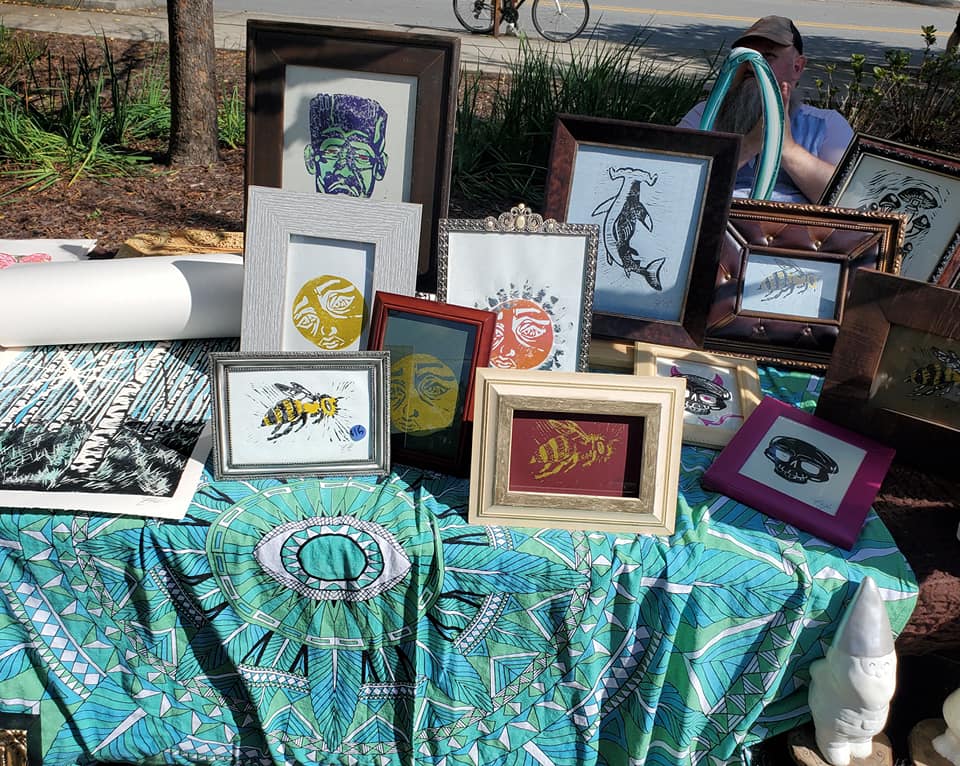 At least half of the attendees had open containers too, so we went with it. 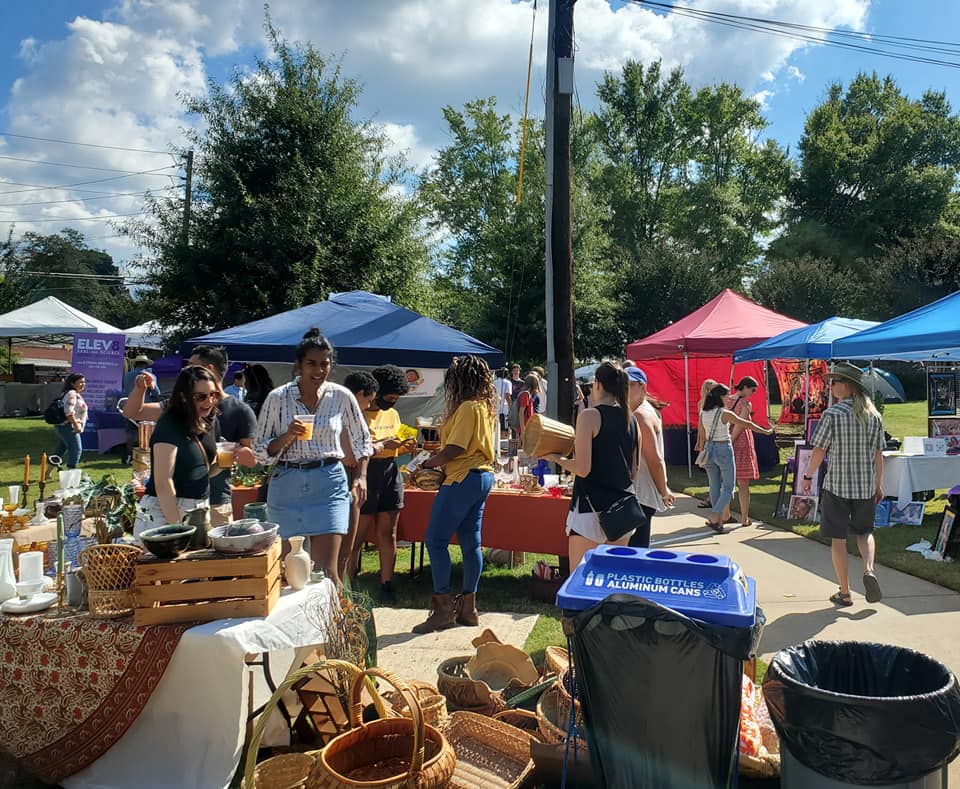 Porchfest was rad, and I look forward to attending more of them in other cities.

In the area for a while? Follow me to Cabbagetown, Blue Ridge, Helen, or Anna Ruby Falls.

One thought on “Oakhurst Porchfest; Party in Decatur-Atlanta”